Capturing the Dignity of the Accused Gambaga Witches from Ghana 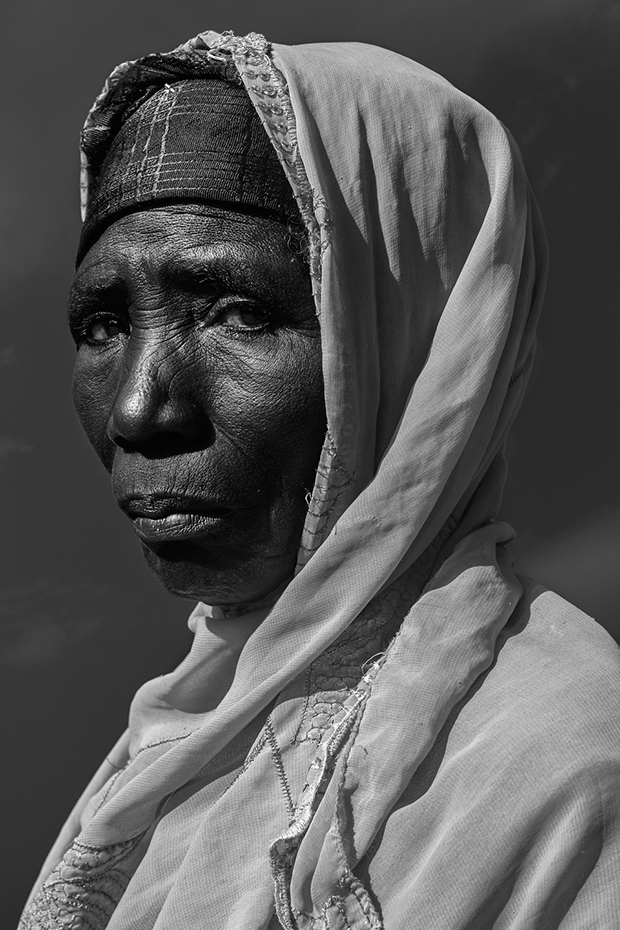 “Hearing the story over again growing up probably pushed me to find something else other than condemned women,” says Ghana-born photographer Eric Gyamfi of the Gambaga witches’ camp, where more than one hundred women, aged late teens to ninety-something, live sequestered from the rest of the population of the country’s East Mamprusi district.

The camp has been the subject of much media and human rights attention in recent years, but Gyamfi, having been in contact with the topic since “Social Studies” class in primary school, longed not document the abuse and stigma that had colored so many of the women’s lives but to reflect their resilient spirits and unbreakable perseverance in dignified, austere portraits.

The women generally arrive at the camp after being tortured or abandoned by their families and communities on suspicion of witchcraft. Anything from the illness of a loved one or a bad harvest can be blamed on spells, and once a woman is accused, she is vulnerable to being beaten or even killed. She seeks and finds protection in the custody of Yahaya Wuni, the chief of the Gambaga camp.

The ritual that determines the fate of a woman accused involves the sacrificial killing of a chicken; explains the photographer, “If the hen lies on its back at the time of its death, feet up in the air, the accused is guilty. However, if the opposite occurs, then the accused is innocent.” Sometimes, a woman deemed “innocent” is sent back home, but most often, the animal dies facing skyward, and the woman must stay at the camp.

Still, the subject of “guilt” and “innocence” is shrouded in some mystery. When pressed harder for details on the matter, the chief told Taba Badoe, creator of the 2010 film The Witches of Gambaga, “If you ask me about that, I’ll stop the interview.” It is believed that when the hen is killed, the women lose their “magical powers” and pose no threat to the community, but in order for relatives to get them back from the camp, they must offer up payment for another sacrificial cleansing.

Even after gaining their “freedom,” some women feel more free at the camp than they do back home, where the men who accused them remain with the threat of further harm and stigmatization. Many choose to stay for years of their own volition. We asked Gyamfi to tell us a bit more about the deeply complex, sensitive topic, which to him is simply “a story about fellow human beings.” 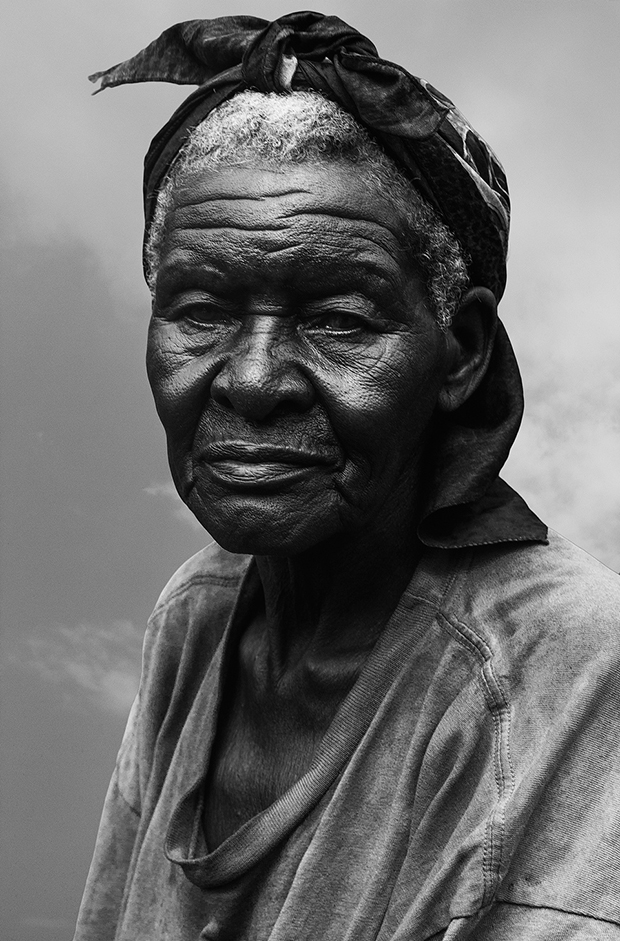 How did you gain access to the camp? Are visitors allowed?
“The camp is not necessarily a prison. It’s somewhere midway between a ‘sanctuary’ and a ‘prison,’ both words in quotes for lack of a better expression. Visitors are allowed afer a careful and thorough query from the chief, usually joined by any of his children or trusted subjects.”

What is daily life like for these women?
“The women at the camp have to make a living like many other women outside of it. Because the camp is situated within the Gambaga town itself, which predominantly relies on agriculture, some of the women, the able-bodied ones, work as farm hands and get paid something small for that. Some of the other women make beads to sell or to be used by as decoration for the other women. Some also fetch firewood to be sold.” 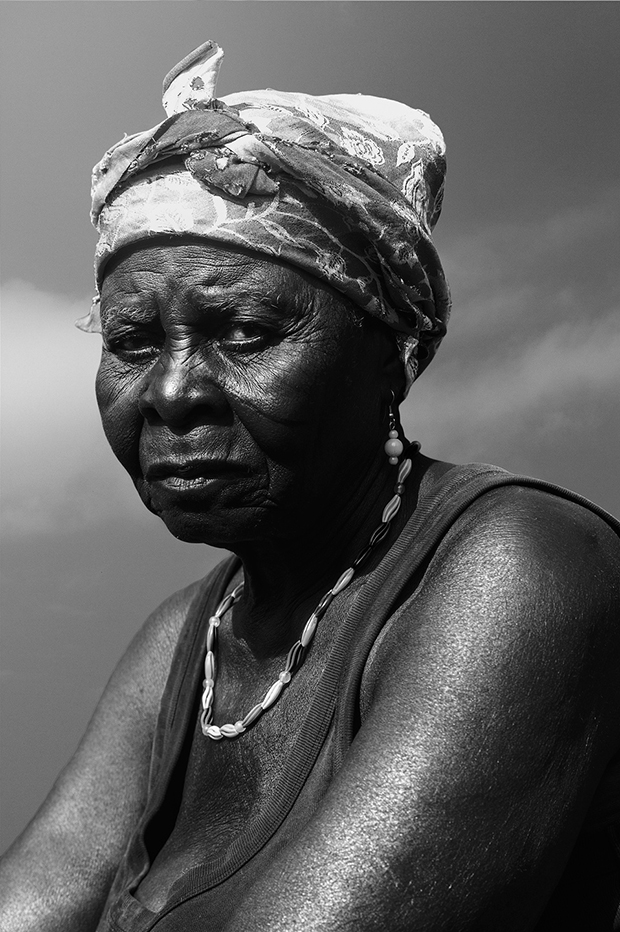 Were they immediately open to speaking with you and being photographed? How did you gain their trust?
“I had to go through the caretaker of the camp, who doubles as a chief and a fetish priest of sorts. He granted me permission after two days and appointed a guide to take me around. With the permission from the chief, and his presence in the form of a guide, the women are mostly inclined to talk. From there, it was up to me to try and connect with the women so maybe they would open up to me, rather than say the generic lines they tell most visitors who come around to do stories on them.” 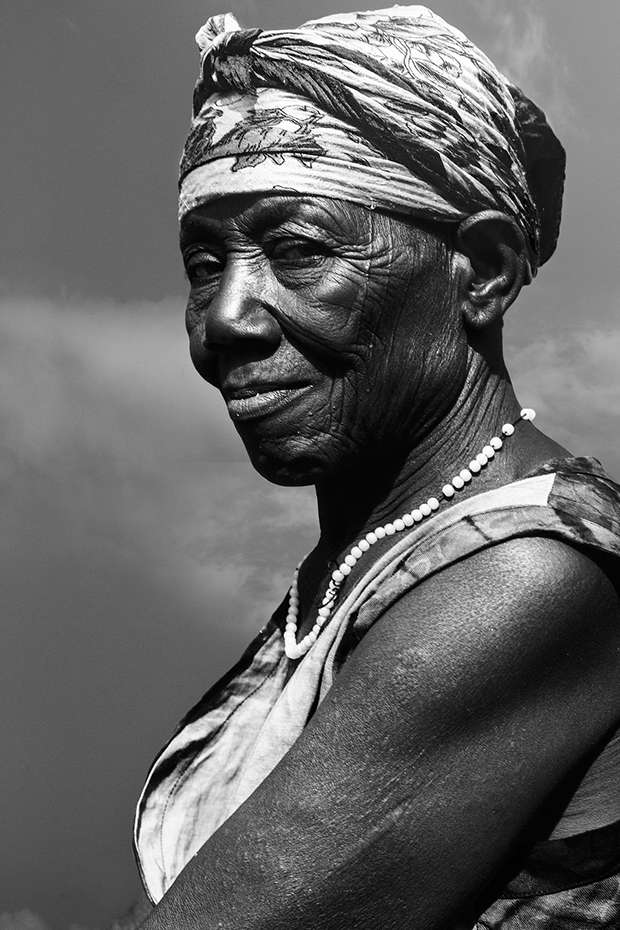 How well did you get to know the women?
“It is almost impossible to know someone within two days, especially given the sensitive nature of this subject matter, coupled with the fact that these women had done many stories already. They’d probably gone through the same question and answer cycle for some time. Putting myself in their shoes, I would feel pretty bored to have to regurgitate the same narrative every time someone wanted to do an interview or story. That’s why I chose to make portraits, portraying them all in similar positions, and lighting as well as backdrop, in hopes that the repetition/similarity could help make their individuality and distinctions even more visible.” 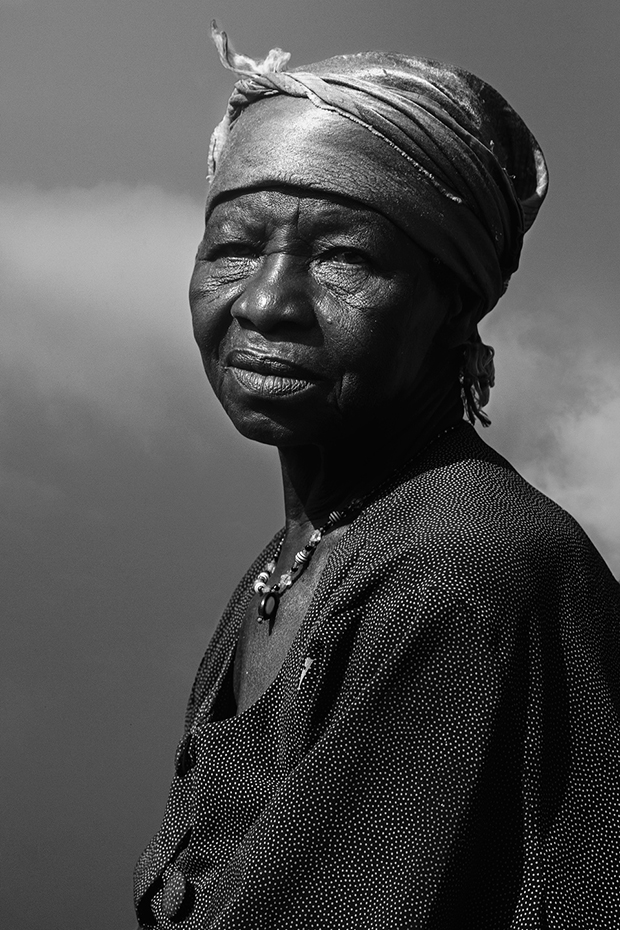 Some women choose to stay at the camp. Are the accused women protected at all from further harm if and when they are allowed to go home?
“There are no special laws in place for the protection of these ‘witches’ when they leave the camp. They are subject to the same laws that seek to protect every individual against violence or oppression in any given situation. The law presents one side, whereas their execution and enforcement presents another side. People on the execution side may have their own biases on witchcraft, and that can be problematic when it comes to enforcing the law. But that is quite ironic, seeing as being at the camp itself presents a level of infringement, albeit a more complex one.” 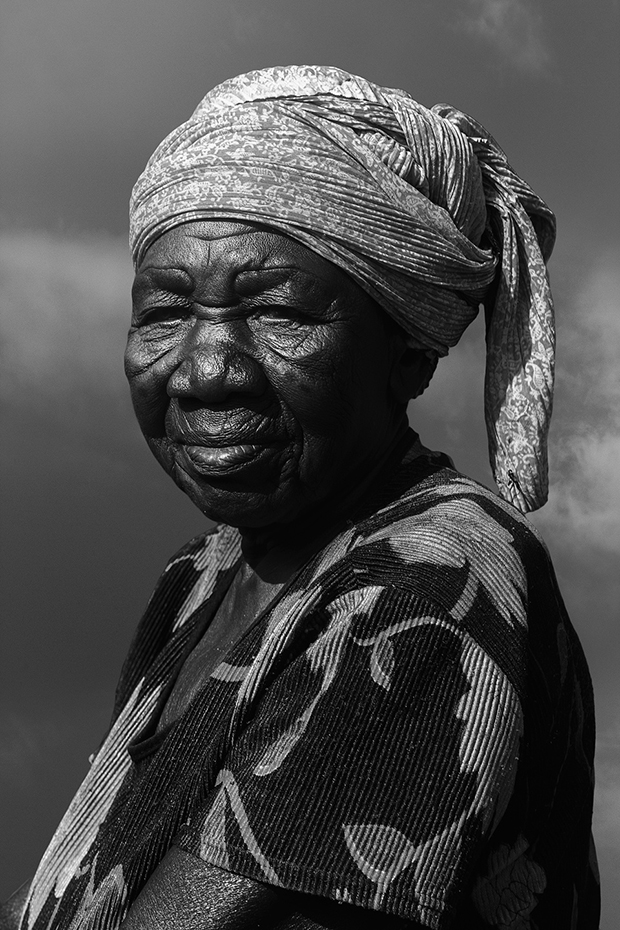 What is the most powerful exchange you had with one of these women? Something you’ll never forget?
“After the photos, one of the women, mma Asana (her local name), prayed for me. She said she had a son, and like her son, she’d want me to succeed. She asked that if things went well for me, that I come back and visit her. She reminded me of a woman I knew when I was a little boy, a friend to my grandmother, with the same name. I still shake when I think about her last words to me.” 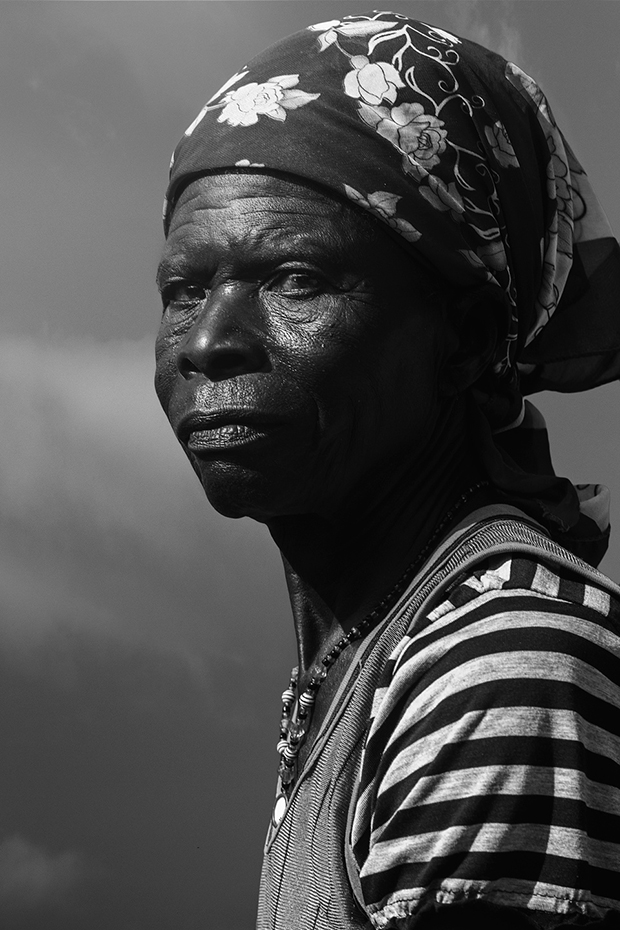 After two centuries years, are the tides changing at all? Is anyone starting to speak out in defense of these women?
“Definitely! Two of the witches’ camps have been closed down recently. The Ministry of Women and Children’s Affairs seems rather positive about rehabilitating these women.”

How has the public responded to your photographs thus far?
“I have mostly heard, ‘Nno way those are the witches from the Gambaga camp. Nothing shows they are witches.’ Others are simply indifferent or not interested. The former gives me hope.”

Have the women seen their portraits yet? If so, how have they responded?
“Digitally yes, but in prints no. I will return in July of this year with prints.” 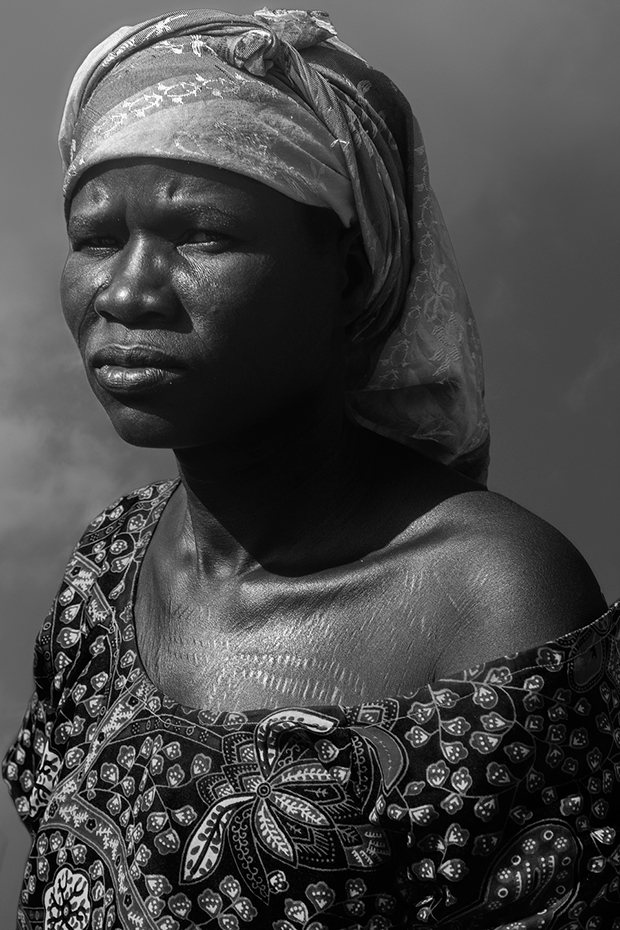