African Women Reconnect with the Past Wearing Inherited Clothing 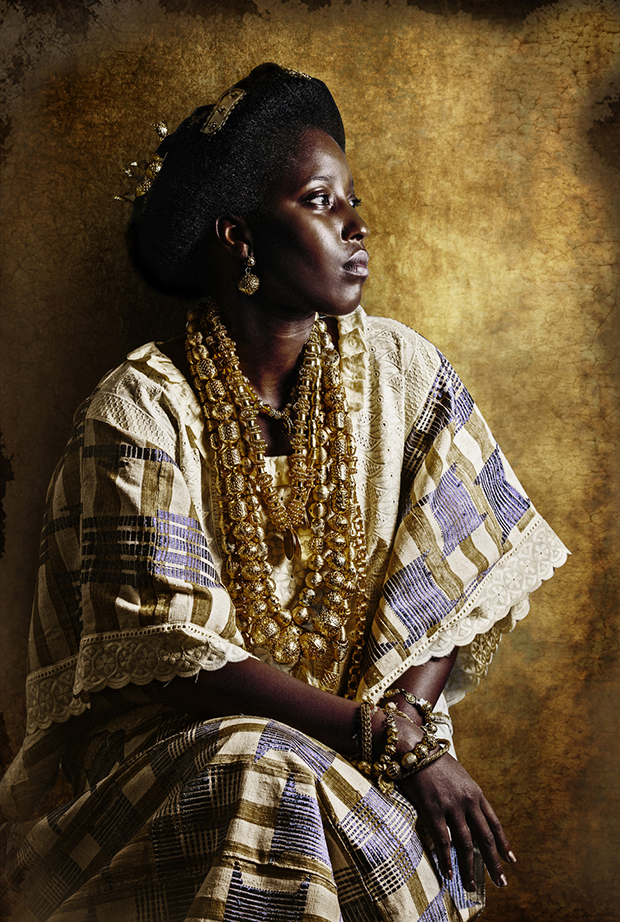 “Soukeyna studies Marketing in Bordeaux (France). She is wearing her great grandmother’s outfit. To be able to bring it to the studio, she and her mother had to ask the permission from the current King of Grand Bassam and promised to return the clothing and jewelery to the royal court right after the photo shoot. The outfit was worn by the Queen, her great-grand mother in the 1930s. Soukeyna came to the studio with her mother, who posed for the project as well. She was wearing a miniskirt and Converse sneakers. Just by wearing the outfit she felt like a different woman. Her manner changed. Her mother was in tears, impressed by the resemblance between Soukeyna and her great-grandmother. They came to the photo shoot with a portrait of the great-grandmother aged 17, in this exact same outfit”.

“Resilience is the ability to return to your original form after being bent, compressed or stretched; it’s elasticity, the ability to recover from adversity” says photographer Joana Choumali from the Côte d’Ivoire, discussing her latest project. Joanna’s paternal grandmother had passed away years before, but it wasn’t until 2013 that Joana realized the magnitude of the loss; a large part of her personal story had also gone with her. Resilience is Joana’s attempt to reconnect with the past while remaining in the present and celebrating African beauty in its diversity.

In contemporary visual culture, the perception and representation of African women is so often limited to what are commonly considered sacred traditions. In Resilience, Joana hopes to develop a new conversation about gender, cultural heritage and identity in today’s Africa. In reality, she emphasizes, there is a gradual evolution taking place; African women show a great propensity to mutate and adapt, while remaining anchored to their roots and traditions. This is the elasticity which transforms into Resilience. This idea is perfectly summed up in a word from the Akan tribe from Ghana and Côte d’Ivoire, Sankofa, which literally translates as “it is not taboo to fetch what is at the risk of being left behind”. The Akans place value in the importance of progress and learning, though also believe that the past should never be forgotten.

The focus os this personal project is traditional clothing, the hand-me-downs passed down from generation to generation; these are indicative of the indissoluble bond that connects us with the generations that came before us. The women Joana photographed are modern, emancipated professionals who are members of contemporary society. Stripped of their jeans, sneakers and stilettos, each of them is portrayed wearing the clothes of their grandmother or mother.

The portraits of these women were part inspired by the retro feel of African studio portraiture from the 20th century; Joana appreciated the portrayal of elegant African women by studio photographers such as Malick Sidibe and Seydou Keita. The studio lighting was influenced by Rembrandt’s paintings, most often characterized by a contrast between brooding darkness and light. Joan wished to achieve a similar soft painterly effect with an antique feel, showing the richness of the fabrics, the beauty of the skin, the intensity of the eyes; she was looking for natural, “timeless” beauties who she found on the street, through word-of-mouth or via the internet.

By far the biggest challenge during the creation of Resilience was finding the most appropriate traditional clothing and make-up to enable the women to feel comfortable. Some of the women selected for this project were unable to participate as Joana couldn’t find the right attire. Joana discloses the quasi-ceremonious character of her photographic procedure: “Each portrait session represented a real ritual, an almost religious moment, a meditation, rediscovering the past, through clothing, fabrics and hairstyles”. 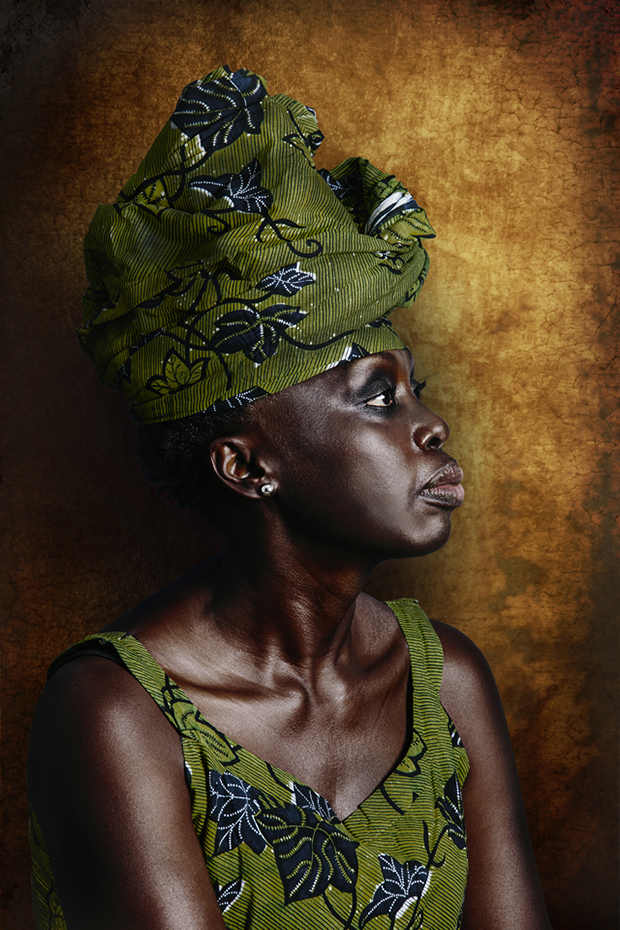 “Danielle spent her childhood living in Spain while her father was working at the Ivorian embassy in Madrid. She now teaches Spanish in Abidjan at the French International school. Here Danielle is wearing her grandmother’s outfit. The style and design cut of her outfit is typically from the 1950s. Danielle was very emotional, as at that time her mother recently passed away. She inherited her grandmother’s belongings from her mother. While posing for the series, she realized how much she and her mother looked alike. Danielle was happy to pose with this particular outfit and confessed that this photo session felt more like therapy”. 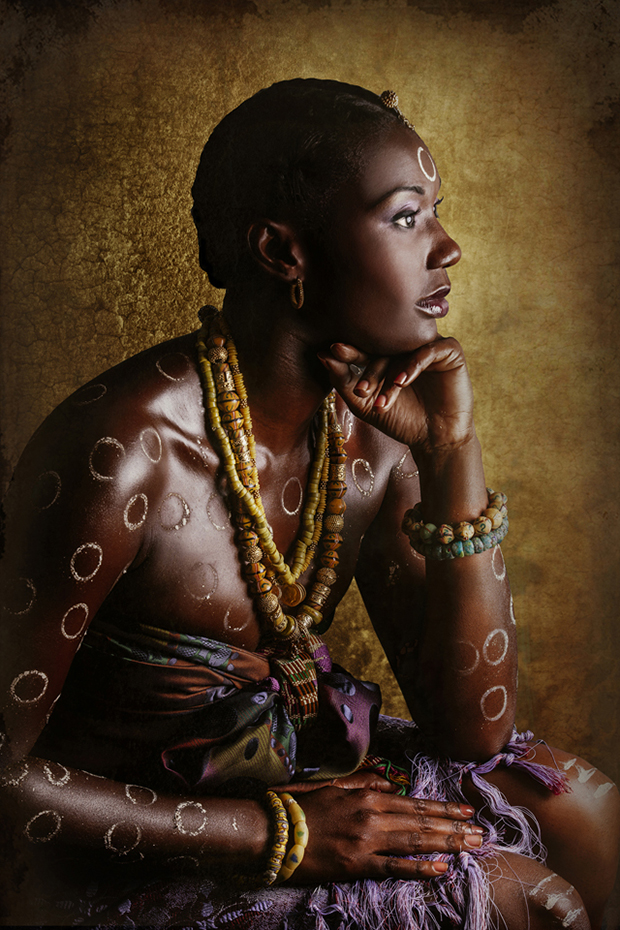 “Sandrine is half Ivorian, half Senegalese. She lives in Abidjan, she was unemployed and recently divorced when she accepted to be photographed. As she was posing, I could feel her emotion. She started talking about what she went through and how she felt about her past relationship. This photo shoot was very intimate. After posing, Sandrine confessed that she felt stronger, ready to have a fresh start for her personal and professional life. Today, she works as a commercial agent in a company and she recently remarried”. 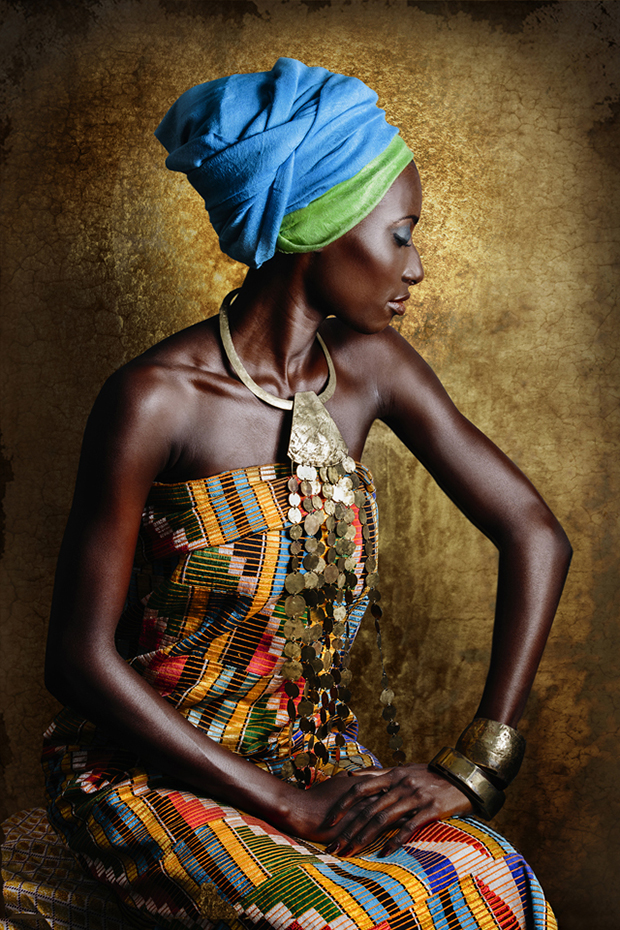 “Cleopâtre is a medicine student at the University of Abidjan. She is from the original tribe of Abidjan, Ebrié. Cleopatre wants to become a pediatrician. As a modern young lady, Cleopâtre came to the studio wearing jeans, the style of her clothing was very modern. By posing in this traditional outfit she felt changed. Cleopâtre naturally posed as if she was an Ebrié queen”. 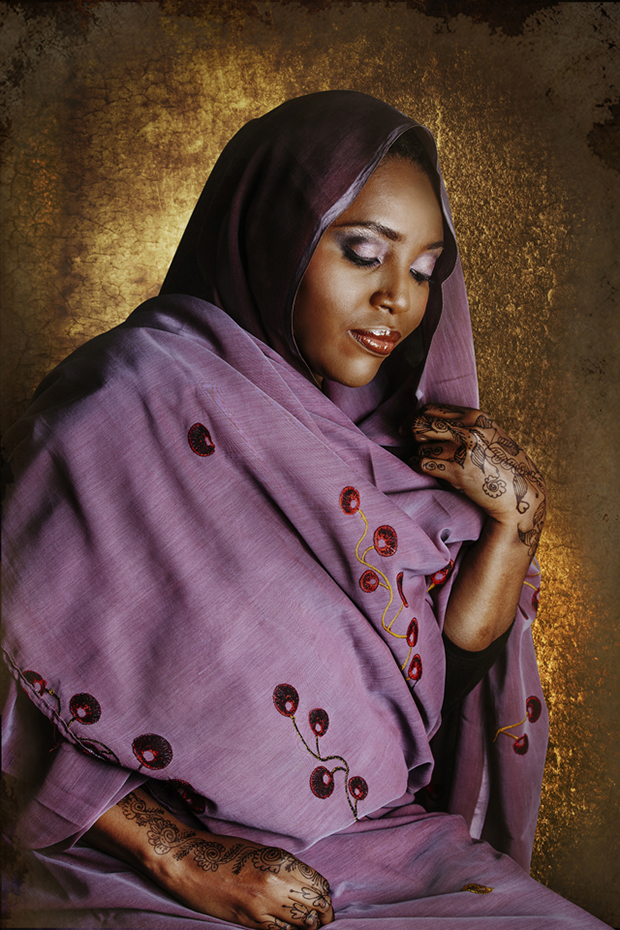 “Fatma is Half Ivorian, Half Sudanese. Her father is Bambara tribe and her mother is Arabian from Sudan. She lives and works in Paris, in the field of Public Relations for an international company. Fatma lived in Maurice island for many years before coming back to Abidjan. Posing in her mother’s clothes allowed her to connect with her story, as she left Sudan with a stranger to live in a completely different environment. Fatma decided to wear the hijab, despite the misunderstandings and discrimination that it often involves. To her, being religious is not an obstacle to freedom and to being open-minded. She works as a communication and events logistic coordinator for a pan-African professional association. She travels the world and is very independent. She confessed that the photo shoot helped her discover a different side of her personality, a side that was more mature, more feminine, stronger. She said that posing for this project helped her to ‘see through’ herself”. 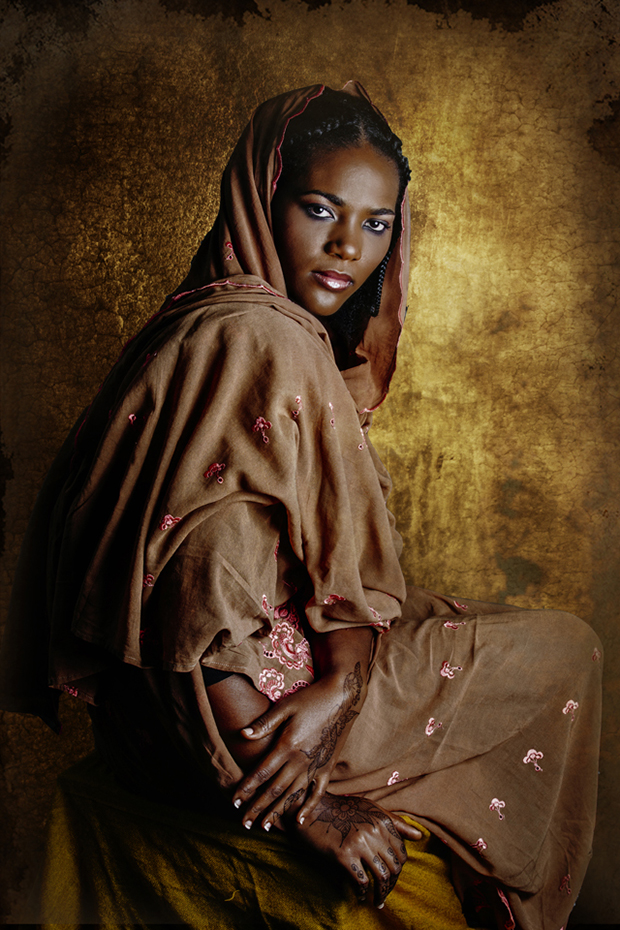 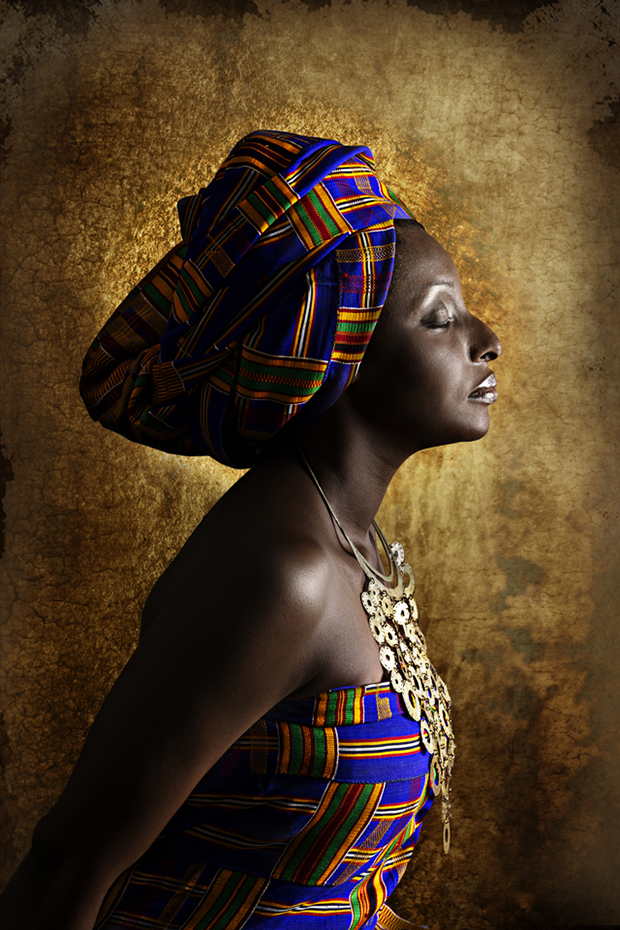