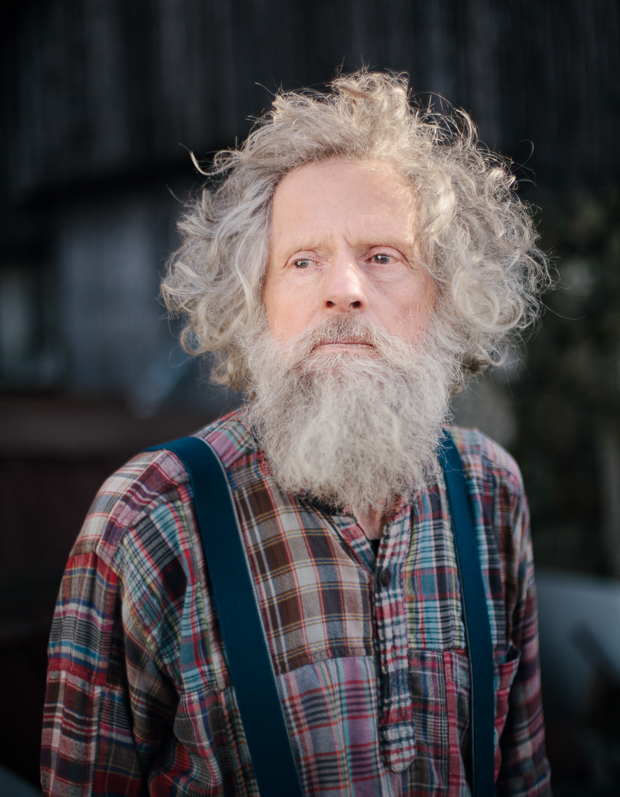 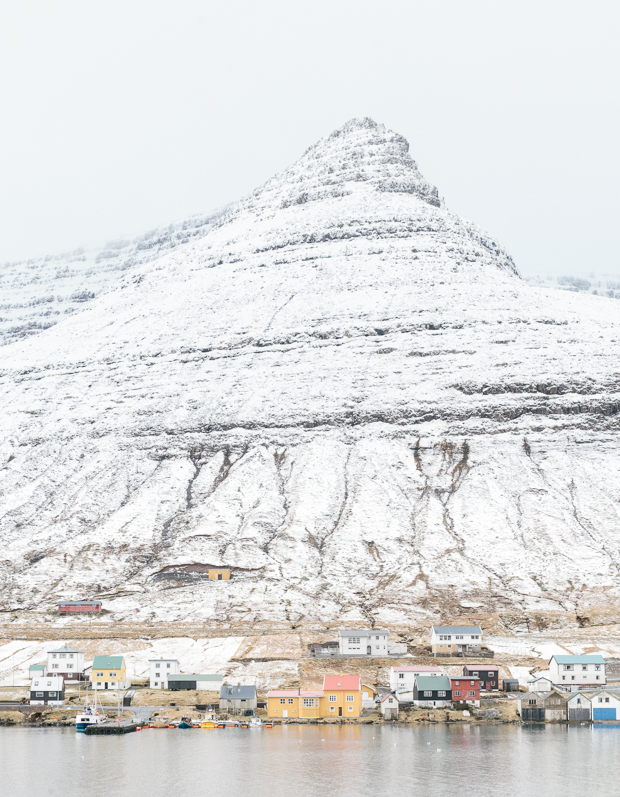 From the photographer who last showed us images of a community living off-the-grid in a remote Spanish ecovillage, Kevin Faingnaert returns with his latest series Føroyar, which documents the last-remaining villages on the equally remote Faroe Islands.

Immersing himself once again within the community, Faingnaert couch-surfed and hitch-hiked his way across the islands, finding doors opening to him everywhere he went. Here, across swathes of snow-veiled landscapes and bordered by dramatic coastline, villages are slowly dropping into decline as more and more of their inhabitants are emigrating from the island in pursuit of greater opportunities.

Though at times lonely and perpetually freezing, Faingnaert learned to appreciate the small, simple comforts of life – listening to stories told in the welcoming warmth of Faroese homes, the sound of songs against the roaring backdrop of the sea, and his memorable encounter with a message-in-a-bottle collector on the beach.

In these clear and pristine landscapes, where villages with populations as low as ten huddle together on the edge of cliffs, Faingnaert reveals a community hanging on firmly to their roots and coloured houses, while underlining that one day these villages must inevitably disappear. 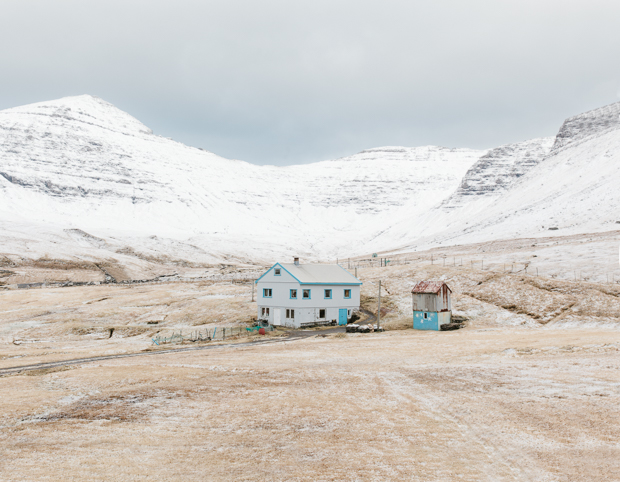 House in the village of Gásadalur. Population: 16 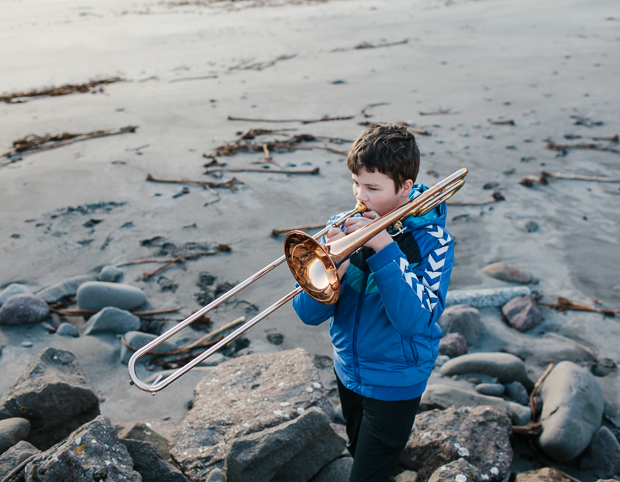 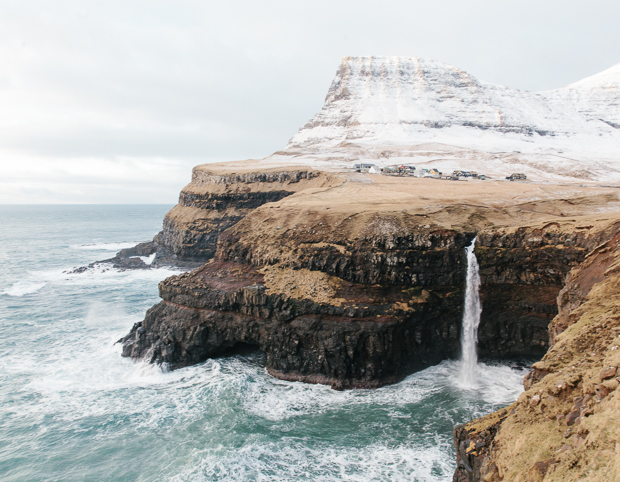 View of Gásadalur village next to the Atlantic Ocean. Population: 16

Can you briefly describe this project and how it started?
“Føroyar is about life in remote and sparsely populated villages on the Faroe Islands, an archipelago in the middle of the North Atlantic, halfway between Scotland and Iceland. The Faroe Islands comprise of 18 islands, separated by narrow sounds or fjords.

The population in the villages on the smallest and toughest islands have seen a sharp decline over time. In a lot of villages half of the houses stand empty. The Faroese are constantly moving away from the smallest villages, settling in the bigger, main villages. Young Faroese people move abroad – mainly to Denmark, to travel or to pursue a higher education, but mostly don’t return to their hometown afterwards.

I spent a month on the Faroe Islands this February. My goal was to visit and document these remote villages before they are completely abandoned.” 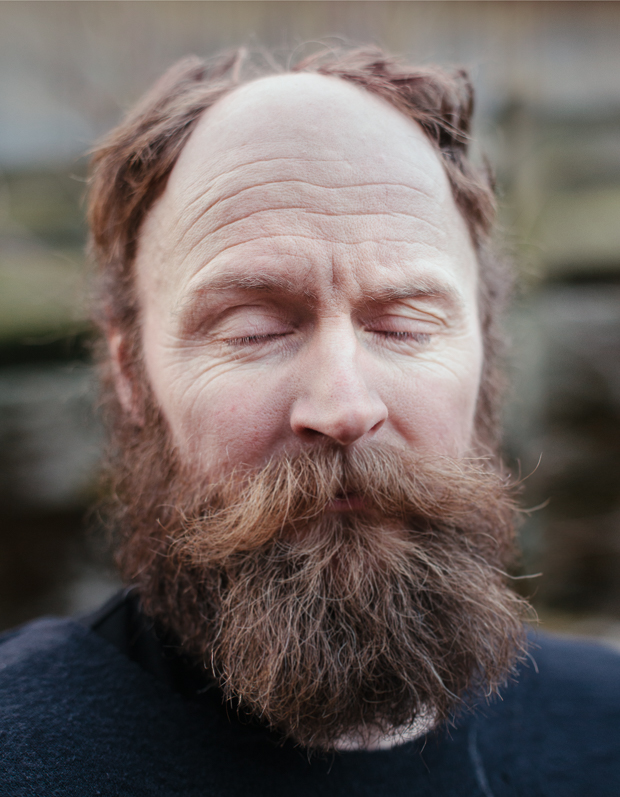 Nicolaj Falck on the island of Nólsoy, Faroe Islands 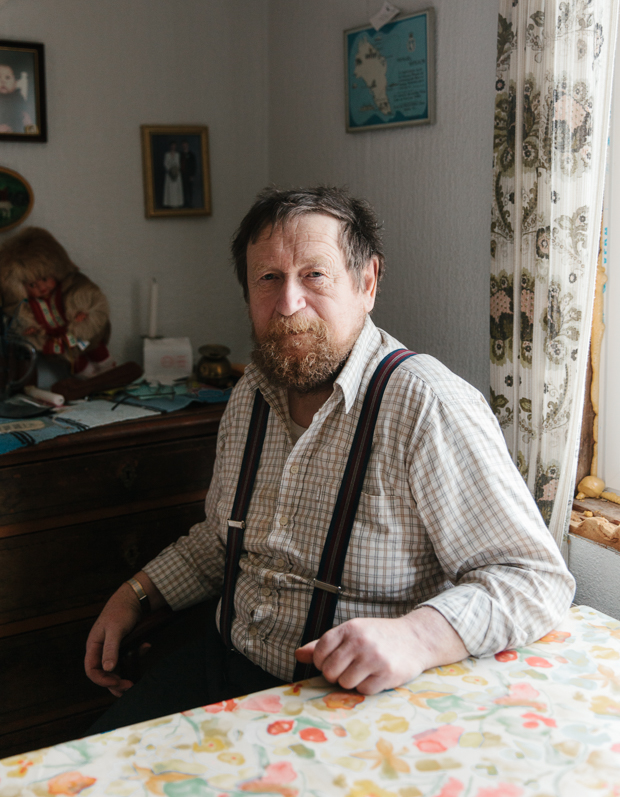 How did you get such an intimate access to this community?
“There are a variety of things I did to get closer to local people.  I spent a lot of nights on local people’s couches. I’ve found them online through Couchsurfing, a platform for members to “surf” on couches by staying as a guest at a host’s home. This wasn’t an option in the remote villages though, only in the main villages where around 1000 people live. I used these villages as a base to visit the smaller villages.

I always found a connection to people living in the remote villages. On the islands everybody knows everybody.  Either they are related, or they are friends from friends, or they know each other’s names through stories. In a way, my project felt like going from place to place with a chain letter. When I spent a couple of hours with someone, I always asked if he or she could direct me to the next person. It opens a lot of doors when you can drop some names. Faroese people love to talk about each other, in a good way.

When I didn’t have a connection in a village, I just walked around for a couple of hours. Some villages only have one road, so usually it didn’t take long before someone noticed me.  It was mostly very cold and windy when I was on the islands. Faroese people are quite shy and introverted, but they are very friendly and hospitable. When somebody saw me freezing outside, it didn’t take long before someone invited me to warm up in their house. I started talking with them and before I knew it, I was eating dinner with the whole family. As some villages only counted around 10 inhabitants, it was quite easy to get to know almost the whole village in one day.

When working on a project like this, I always try to embed myself within the community. I went to church with local people, although I’m not religious. I helped to shovel snow on people’s driveways, I went fishing with local fishermen, and I made pictures for a newly-wed couple… I also chose not to rent a car and instead hitch-hiked wherever I could. It’s a good way to get to know people.” 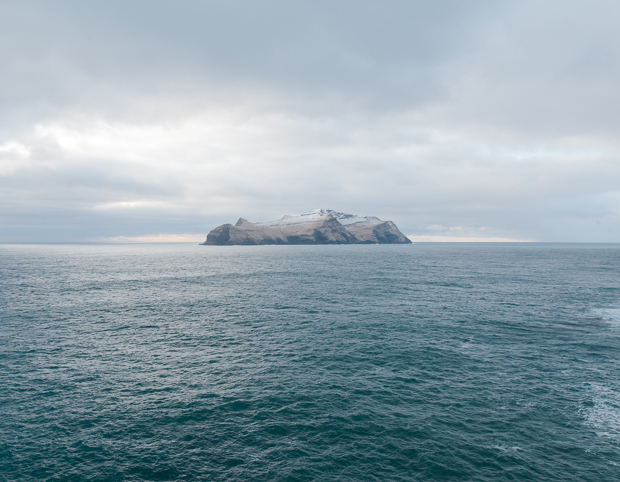 The island of Mykines. Population: 10

How would you describe this place to someone who has never visited it?
“The Faroe Islands are an absolutely enchanting and moodily beautiful place. Every village is surrounded by a stunning landscape of rocky sea-cliffs, cloud-encircled mountains and the restless Atlantic Ocean. It rains and snows a lot, and waterfalls flow pretty much continuously. The smallest villages enjoy a silent northern beauty and seclusion. At first glance, all houses seem abandoned and you feel like the only person around for miles. However, it hardly feels depressing. Once you get to know somebody from the villages, it doesn’t take long before you get to know the whole village. Everybody knows each other very well, as most of them have known each other for their whole lives. One hour after someone’s done something, the whole town knows about it. This has its pros and cons. The Faroese people are proud, friendly, maybe a little shy, but that only lasts until you approach them. You get invited in someone’s house easily. The wives serve coffee; the men drink coffee and tell stories.”

Did you encounter any challenges on this project?
“My biggest challenge was the cold. I spent a lot of days outside, walking from village to village and meeting people on the way. My hands and feet were always freezing by the end of the day, which made it hard to stay focused. As winters on the islands are generally mild, I didn’t expect it to be that cold. The days were also very short. The sun was up for around 6 hours, so I always had to make the most of it during that short period of time.

At times I also felt quite lonely. Social life on the islands dies out completely during winter. Even on weekends you barely meet people in the street. Everybody’s warm inside. I, in contrary, was almost all the time outside. I remember days walking around without meeting anybody, besides some interaction with a couple of eyes staring at me from behind a window.” 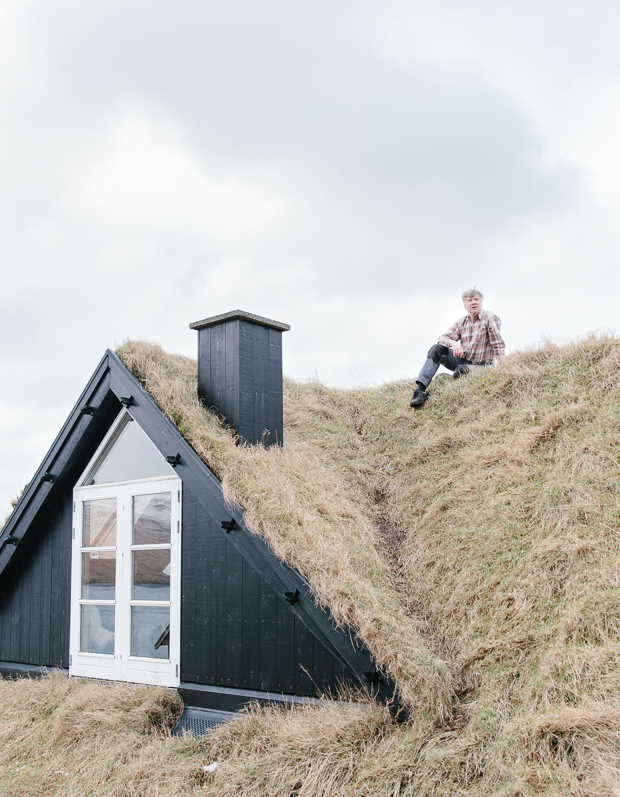 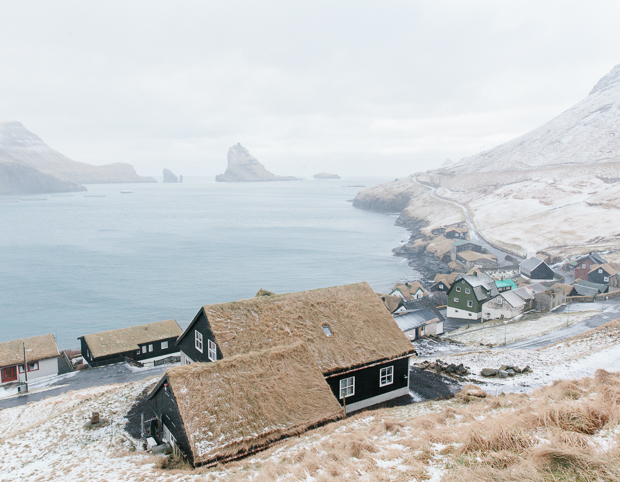 Do you have a particularly memorable experience to take away from it?
“I have a lot memorable experiences to take away from this project. One in particular was a day I spent with Simun Hanssen, a retired sailor from the island of Svínoy, where only twelve people lived when I was there. Since his retirement years ago, Simun has been collecting bottles with messages inside on the shores of the island. Every morning he walks around the island, looking for bottles with a message inside. In recent years he has found around sixty of them. He showed me some of the bottles he’d discovered and the messages they contained. Some were love letters, some were kid’s drawings, and some were just random poetry. When there’s an address enclosed in the message, Simun makes a habit of writing to them. He once even visited one of the message senders in Norway. He told me most of the messages come from Canada. I have a fond memory of that day with Simun, reading messages from bottles and listening to his stories.

I also enjoyed going to church on Sundays. I’m not religious and I only went to church to pray a couple of times when I was a child. In contrary to the giant, stone-cold churches I’m used to, the churches in the small Faroese villages are made of wood and have a cosy, colourful interior. On a stormy Sunday, the organist asked me if he could play a song for me during the ceremony. I asked him if he could play the Brabançonne, the national anthem of Belgium. I was missing home a lot on that day. He played the anthem with ease, and I will never forget the melody of the Brabançonne blending with the sound of roaring waves and Arctic wind outside.” 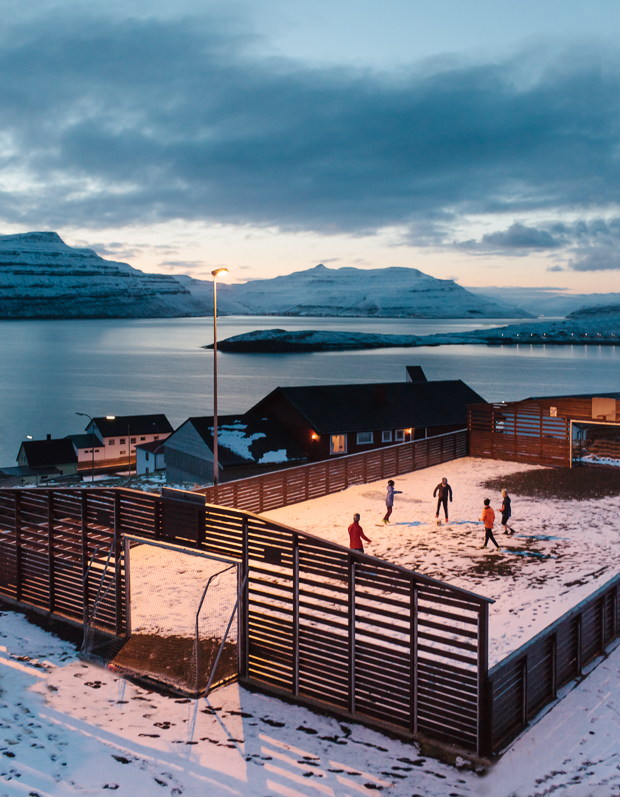 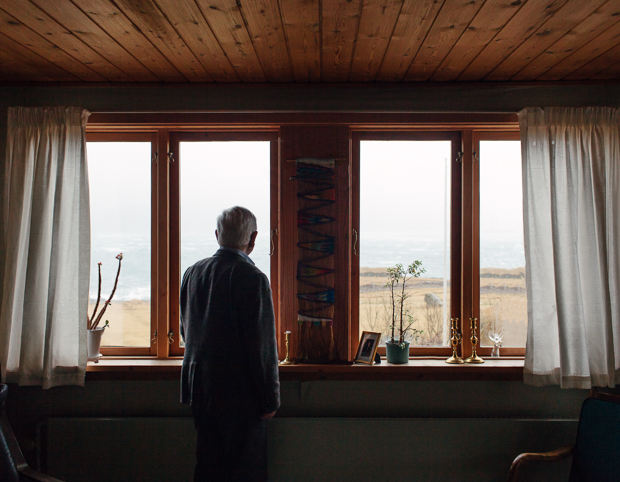 Joan Hendrick, author of the first Faroese dictionary, overlooking the Atlantic from his house in Kirkjabøur, Faroe Islands. March 2016