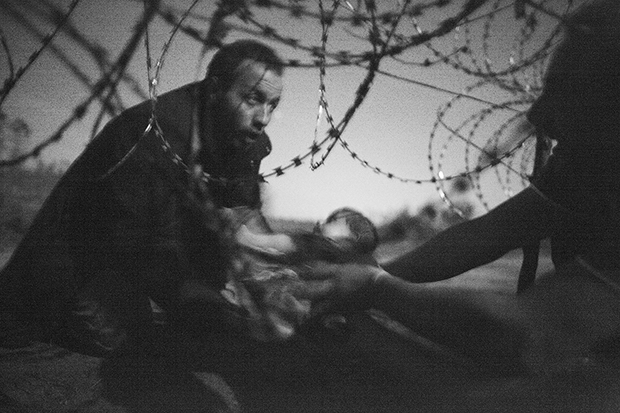 A man passes a baby through the fence at the Serbia/Hungary border in Röszke, Hungary, 28 August 2015. © Warren Richardson, Australia, 2015, Hope for a New Life 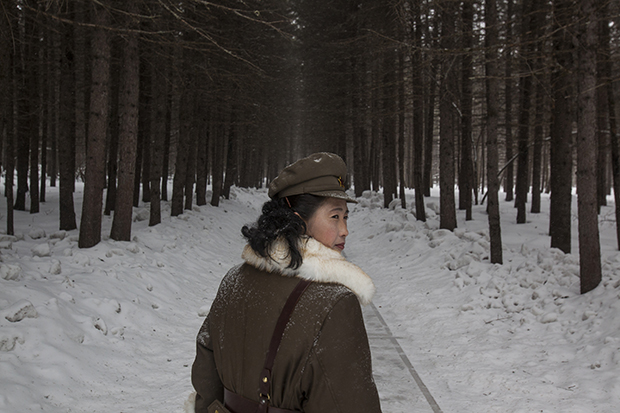 A soldier, working as a guide, walks through a forest that is said to be a former camp site of the late North Korean leader Kim Il Sung; Mount Paektu, North Korea, 04 April 2012. © David Guttenfelder, USA, 2015 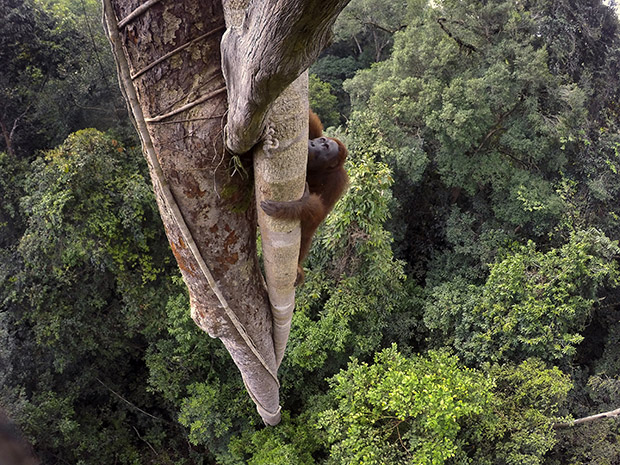 Children went first, then women, fathers, and aged men. There were hundreds of refugees struggling the cross the border from Serbia and into Hungary, and Australian photographer Warren Richardson was overcome with fatigue. Still, he followed as, under the dark shroud of night, a man slipped a child beneath a hole in a barbed wire fence. The police were fast approaching, and silently and without a flash, Richardson captured an instant in which time both sped up and slowed to a halt, a fraction of a second that was acutely intimate yet told a universal story.

Richardson’s shot leads the pack as the winner of the 59th annual World Press Photo Contest, which received an unprecedented 82,000 submissions from 128 countries. The jury selected 42 extraordinary winners for this year’s exhibition, which will tour 100 cities in 45 countries.

Categories included contemporary issues, general news, spot news, daily life, nature, long-term, and sports, and the winning images bring us from hope to devastation and back again. Their subjects on the surface are disparate, but together the selected photographs speak to a world that is united—if nothing else—by the will to survive for one more year.

Tim Laman’s Sumatran orangutans, Mauricio Lima’s burned body of a 16-year-old soldier for the Islamic State, Sergio Tapiro’s combustible Colima Volcano, David Guttenfelder’s citizens of North Korea, and all the rest occupy the very same place: the world we where we all must live.

See all the winning images from World Press Photo here. 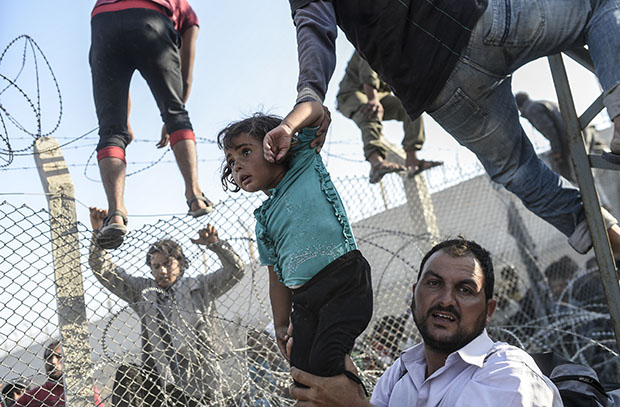 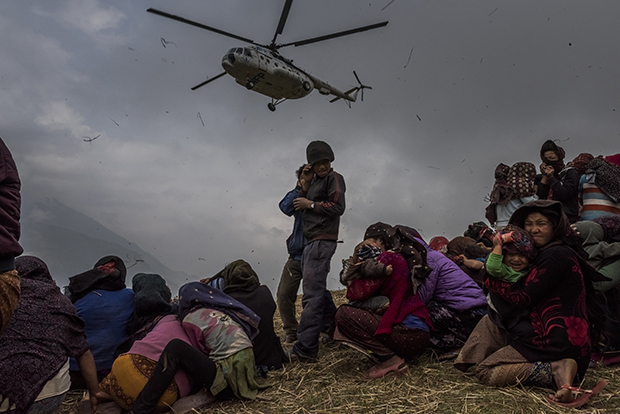 Nepalese villages watch a helicopter picking up a medical team, dropping aid at the edge of a makeshift landing zone in Gumda, Nepal, 09 May 2015. © Daniel Berehulak, Australia, 2015, for The New York Times 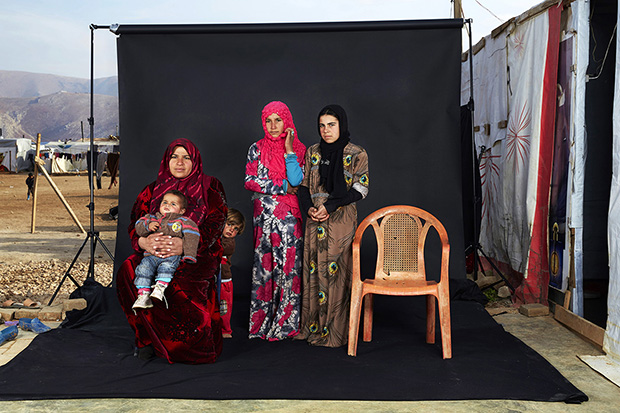 Portrait of a Syrian refugee family in a camp in Bekaa Valley, Lebanon, on 15 December 2015. The empty chair in the photograph represents a family member who has either died in the war or whose whereabouts are unknown. © Dario Mitidieri, Italy, 2015, Lost Family Portraits 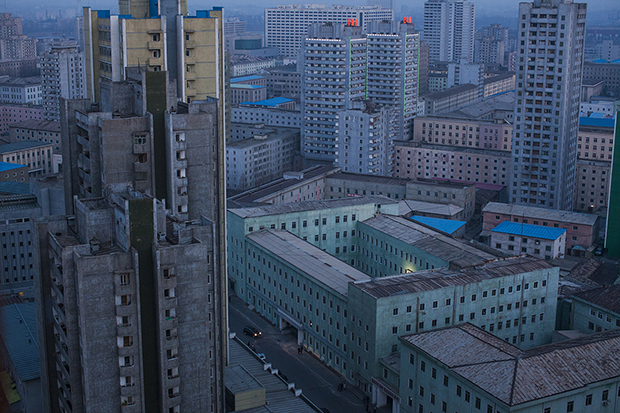 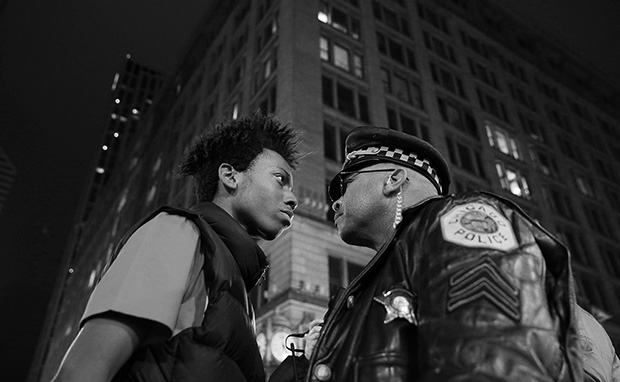 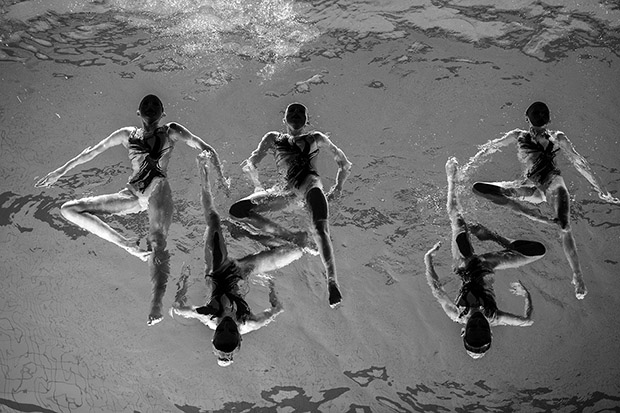 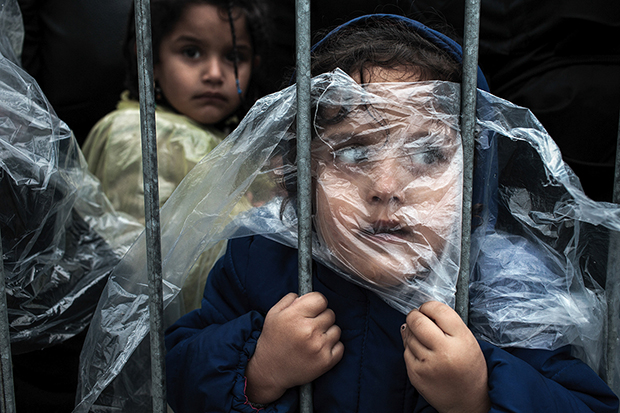 A child is covered with a raincoat while she waits in line to register at a refugee camp in Presevo, Serbia, 07 October 2015. © Matic Zorman, Slovenia, 2015, Waiting to Register 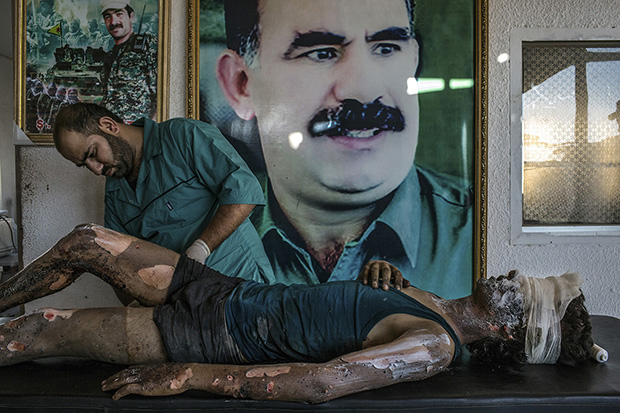 A doctor rubs ointment on the burns of a 16-year-old Islamic State fighter named Jacob in front of a poster of Abdullah Ocalan, the jailed leader of the Kurdistan Workers’ Party, at a Y.P.G. hospital compound on the outskirts of Hasaka, Syria on 01 August 2015. © Mauricio Lima, Brazil, 2015 for The New York Times, IS Fighter Treated at Kurdish Hospital 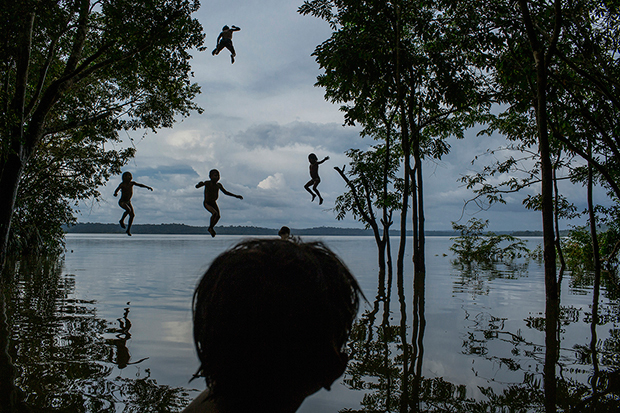 Indigenous Munduruku children play in the Tapajos river in the tribal area of Sawre Muybu, Itaituba, Brazil on 10 February 2015. The tribesmen of the Munduruku, who for centuries have sanctified the Tapajos River on which their villages sit, are fighting for survival. Brazil’s government plans to flood much of their land to build a $9.9 billion hydroelectric dam, the Sao Luiz do Tapajos, as part of a wider energy strategy across the Amazon rainforest. © Mauricio Lima, Brazil, 2015, for Al Jazeera America, Amazon’s Munduruku Tribe 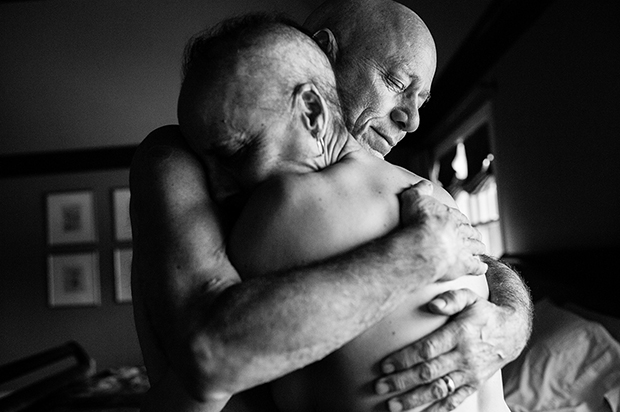 Howie and Laurel Borowick embrace in the bedroom of their home. In their 34- year marriage, they were diagnosed with stage-four cancer at the same time. New York, US, 08 March 2013. © Nancy Borowick, USA, 2015 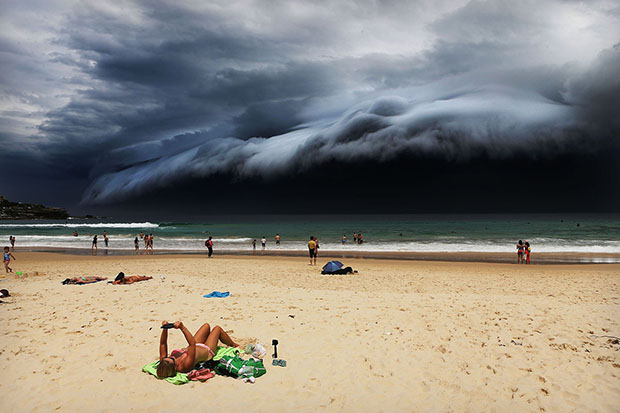 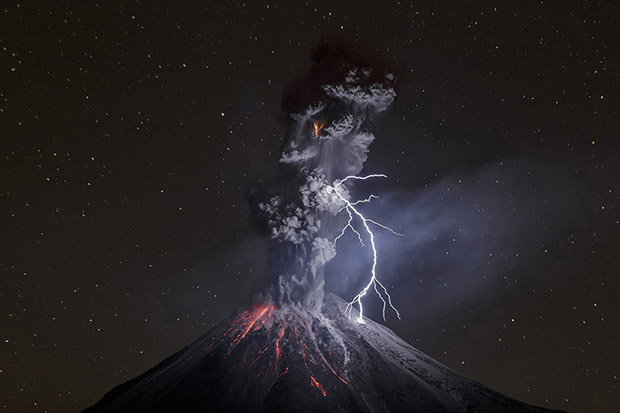 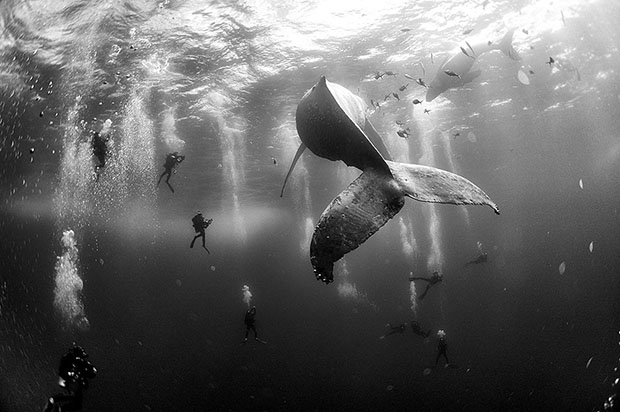 Divers observe and surround a humpback whale and her newborn calf whilst they swim around Roca Partida in the Revillagigedo Islands, Mexico, 28 January 2015. © Anuar Patjane Floriuk, Mexico, 2015, Whale Whisperers