Visions of Transience and Intrigue in Bangkok’s Central Station 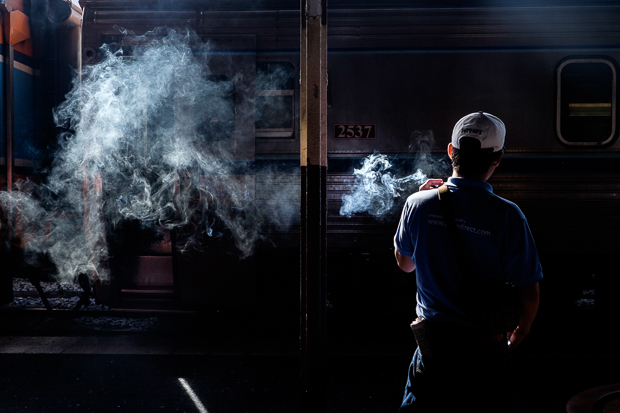 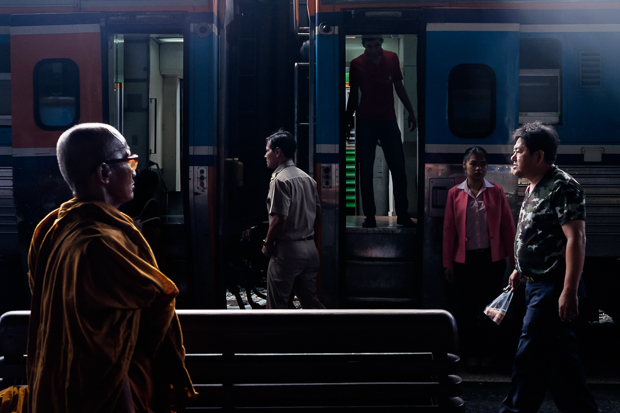 Bangkok street photographer Rammy Narula has based his latest body of work on Bangkok’s central station, Hua Lamphong. In these images, he captures the transience and intrigue of the station atmosphere, freezing moments of idle time – the travelers pause within the frame for a fleeting minute before they’re eaten up once again by clouds of smoke.

As a habitual photographer at the station, Narula surprised himself one day when he discovered a small porthole of time as a train pulled into the station and the light produced an atmosphere that he hadn’t achieved before in his photographs – naturally he wanted to go back and recapture that light. It is this light that pierces through the diesel haze in his images, giving his un-staged scenes a cinematic effect, as if casting a spotlight on these people as characters in their own intertwined narratives.

To look at Narula’s images of Platform 10, we feel almost present; in our minds we can hear the shrill of whistles, the hiss and spit of the engines and the urgent click of shoes scurrying across the floor. Yet at the same time, Narula’s photos possess a dreamlike tranquillity, slowing all movement to a somnambulant pace, and leaving us yearning for an adventure ourselves. 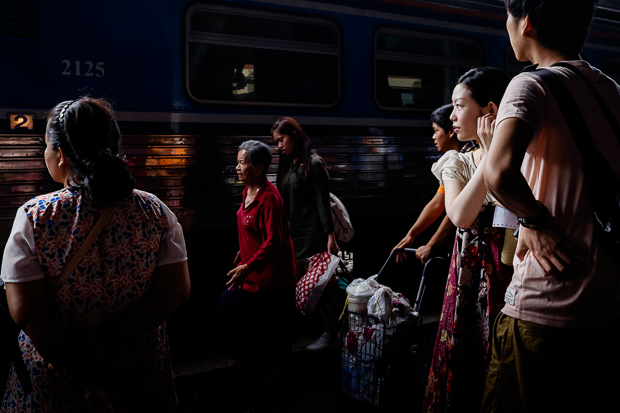 What was it that attracted you to the station in the first place?
“I’ve been going to Hua Lamphong Station for my photography regularly for about four years now. I originally went there because I felt it was an uncomplicated place to take pictures in. It’s a slow-moving location. Rarely does it ever feel like anyone is in a hurry to get somewhere, despite it being a train station. Most people there also don’t mind being photographed, and that helped with my learning curve the first year or so. Over time though I grew to love it and felt a much deeper connection that kept me going back.” 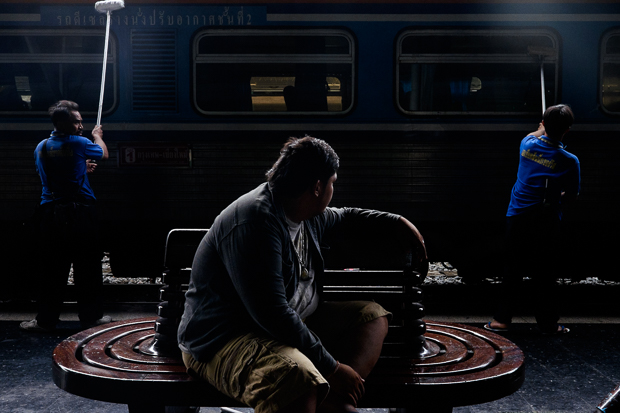 Is there any reason why you chose Platform 10 specifically?
“I’d like to think it chose me [laughs]. It was very much by chance that I found myself on this quiet platform one day when a short train came in. During its twenty minute layover, the train blocked the light in a way that gave the platform a different sort of atmosphere than what I was used to seeing at the station. The image I got that day also looked and felt different to my previous photographs from that location, and I was very excited. I felt the excitement because it gave me a new way to make photographs at the same place I’ve been going to for years.

“Because I wanted that same mood on more images, I began challenging myself to go back to the same platform at the same time, when that same train came in for its daily short layover to capture two, three, four nice consistent pictures. I also tried, but couldn’t replicate the results I wanted at a different time or anywhere else in the station, and that made me even more curious. A small stretch of a train (maybe 50 meters or so) for the twenty minutes each day that it stopped there – how many different photographs could I make? That limitation pushed my imagination and so I kept going back almost every day for the next six months.” 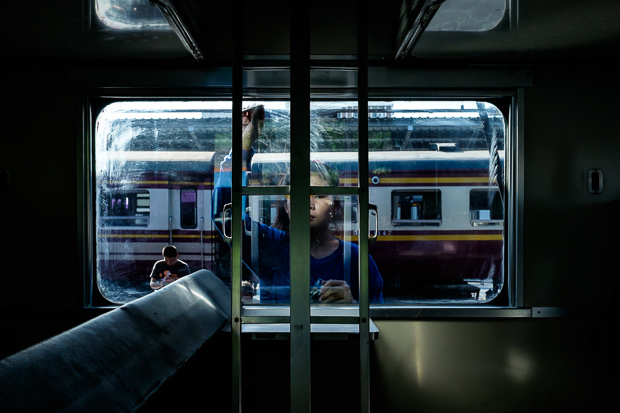 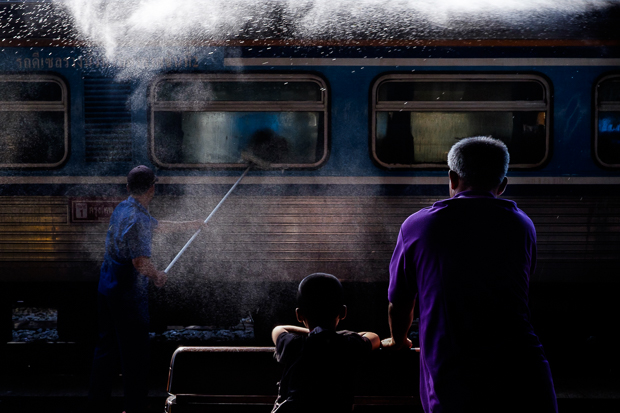 What did you look for when taking your photos? What kind of feeling did you want to evoke in this series?
“What I have always looked for were the characters I came across in this station. And it was my goal ever since I started photographing here to capture them in the most beautiful and memorable way I possibly could – un-posed photographs of people on their journeys that allow the images to speak for themselves, and to speak for me and the connection I felt with the people and this place. That I had this light to work with was the cherry on top.

“As for what emotion I wanted the series to evoke, I’d like to leave it to everyone’s own interpretation. I think everyone will have different feelings towards it and if they can connect with the series in their own ways, it would be a bonus.” 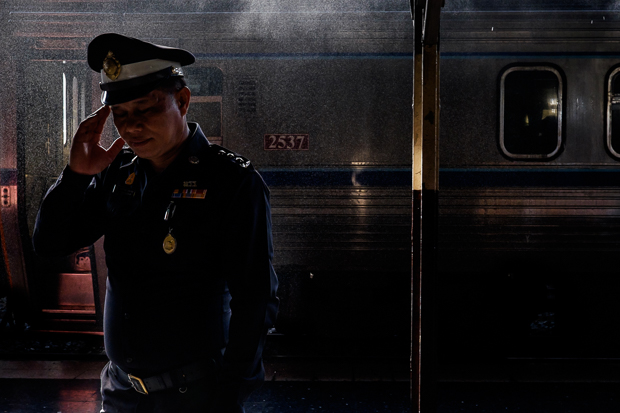 Lastly, do you have a favorite photograph from this series – and if so, why?
“I’m making that awkward expression my parents always used to make when I asked them which of their kids was their favorite, me or my brother. It would usually be followed with an awkward silent pause before they responded, ‘you’re both our favorites, of course!’

“So… after a little awkward silent pause, I will say the image of the train official with the red and green flags is my favorite. I was so happy when I came home with it. His elegant pose, his gesture… I also felt a little lucky capturing him in that beautiful motion with a slight blur of the flag. It has the total package for me and epitomized what I was trying to do with this series – capturing beautiful images of people and their spirits in this wonderful light. And most of all, he’s signaling for all of us to get our journeys under way.” 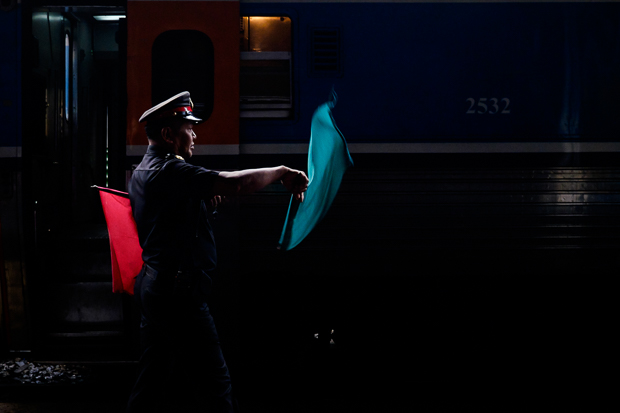