Photographer Brian Smith on Staying Ahead of the Game, the Importance of Personal Work and Mirrorless Technology (Sponsored) 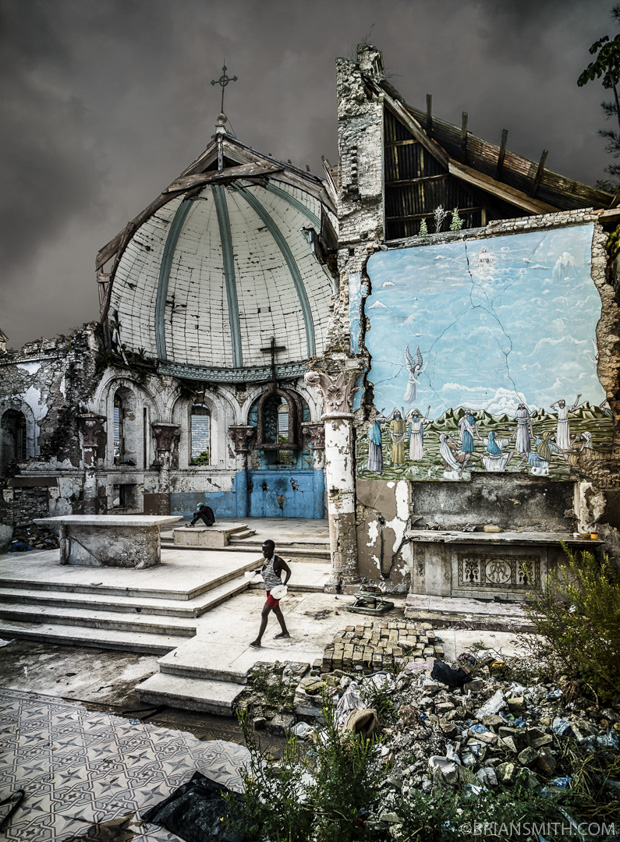 The career of Miami-based photographer Brian Smith kicked into full gear when he was an undergrad at the University of Missouri; by the time he was twenty-five, he had already won the Pulitzer Prize for Spot News Photography, making him one of the youngest journalists of any kind to ever take home the coveted award. Soon after those iconic shots of the Los Angeles Olympics, he would once again be nominated for the same award for his documentation of life in Haiti, a subject to which he would return years down the line. Smith calls himself “the luckiest guy on the planet,” but with three books, World Press Photo, Photo District News, American Photo and Pictures of the Year awards, not to mention exhibitions in the Library of Congress, American Museum of Natural History, and countless others, we think it has less to do with luck than it does with talent… and a knack for keeping up with and taking advantage of the best advancements in camera technology.

Since he was named a Sony Artisan of Imagery, Smith has continued to excel and to dominate the industry with vivid and unforgettable photographs, most of which were shot using Sony’s innovative mirrorless camera series: compact, full frame workhorse cameras with interchangeable lens and astonishing image quality that rivals and exceeds the expectations of a DSLR. We spoke to Smith about his career, what it means to be a Sony Artisan, and what makes Sony mirrorless cameras stand out from the rest. 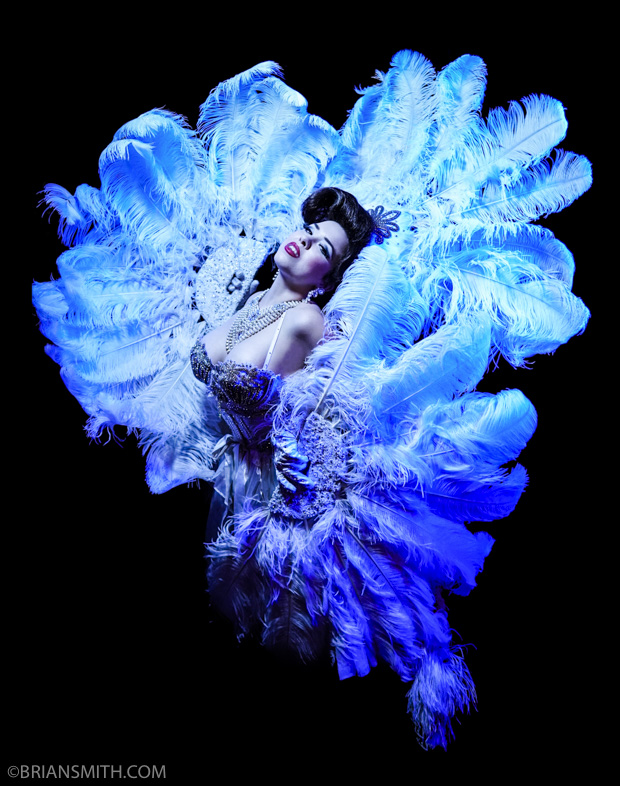 You’ve shot everything from the Olympics to the fall of President Duvalier in Haiti. Do you approach photojournalism, sports photography, and portraiture differently? In what ways are the genres different, and in what ways are you the same photographer throughout?
“While all those types of shoots may seem different, the more you shoot, the more similarities you see, and skills that you learn with one can really help you with another. Portrait photography is more about directing your subject, yet the skills you learn shooting sports or photojournalism can help you anticipate and react to serendipitous moments that happen in the course of a shoot.”

You (literally) wrote the book on the Secrets of Great Portrait Photography. What are some of the secrets and tips you’d share with emerging photographers?
“As a portrait photographer, the most important buttons you can push are not on your camera but on your subject. Great portrait photography really starts with making a connection with your subject. One of the best things you can do is to get a lot of people in front of your lens. Go out and shoot portraits of 50 strangers in a way that captures their personalities. It gives you a lot of confidence when you have just five minutes to shoot a celebrity or a CEO.” 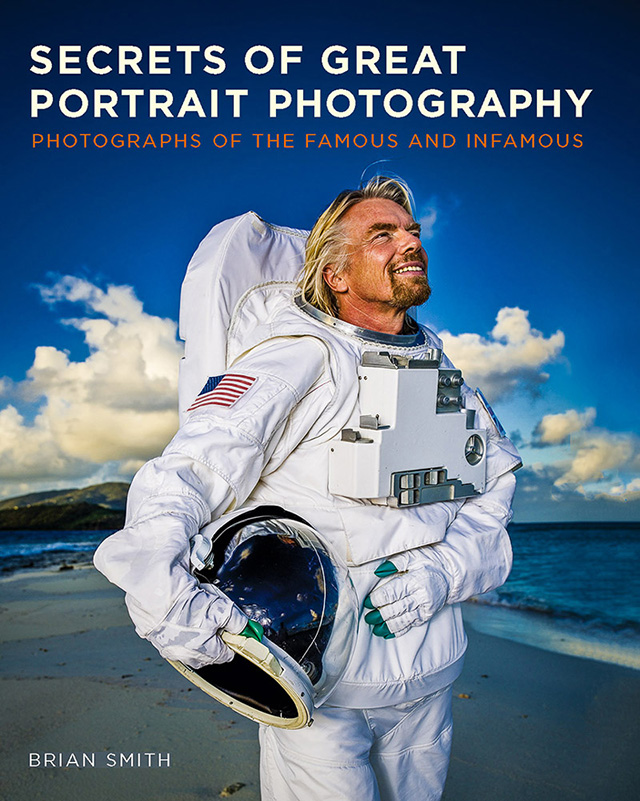 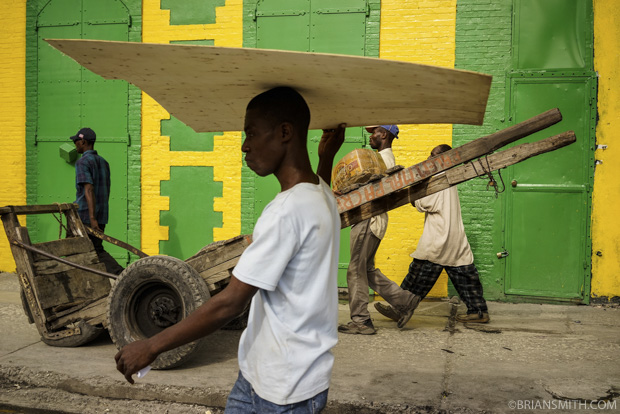 What are the differences between working on a project with a major magazine rather than pursuing something personal?
“The former is much more effective at putting money in the bank, and the latter usually drains it out. Other than that, the biggest difference in assignment photography is that you have to fulfill the client’s needs. But that doesn’t mean that you can’t fulfill your own needs in the process. In fact, one of the best things you can do on assignment is to be certain that you always, always, always walk away with a shot you’re proud of even if it’s not on the client’s list. I’ve landed dozens of magazine covers with ‘the one I shot for myself.'” 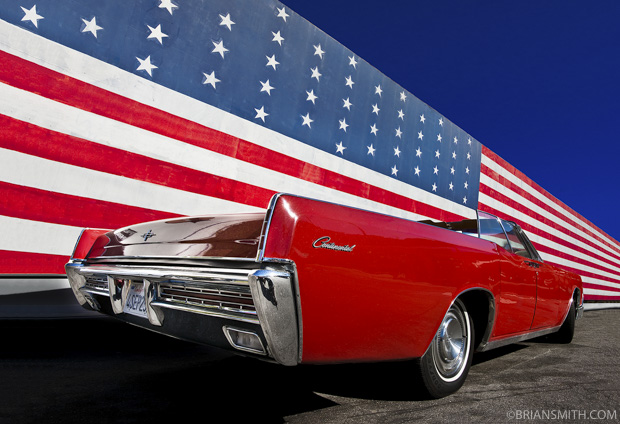 Your schedule is jam-packed with talks and public appearances. Why is it important to you that you are active within the photo community? What do you find rewarding about teaching other photographers the ins and outs of a business you know so well?
“Anyone who has any success in this business got there thanks to lots of help from others. Never forget to pay it back.” 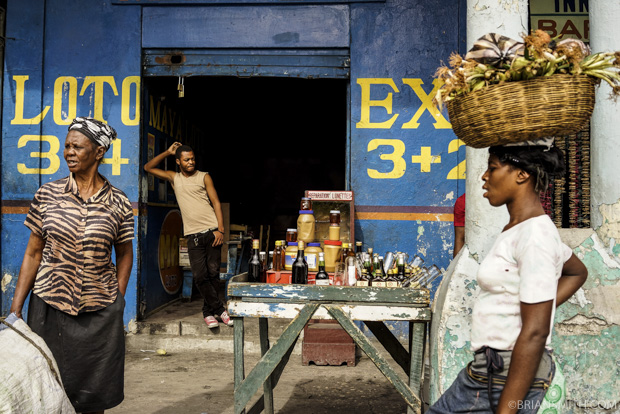 Your portraits are instantly recognizable and nothing short of iconic. Is there a particular photograph—throughout your career—that you hold most dear?
“I don’t have a favorite photograph, but I have lots of favorite experiences over the years, like hanging with Richard Branson on his private Island, sharing cupcakes with the lovely and talented Anne Hathaway, and getting Donald Trump to do exactly what we told him to do…” 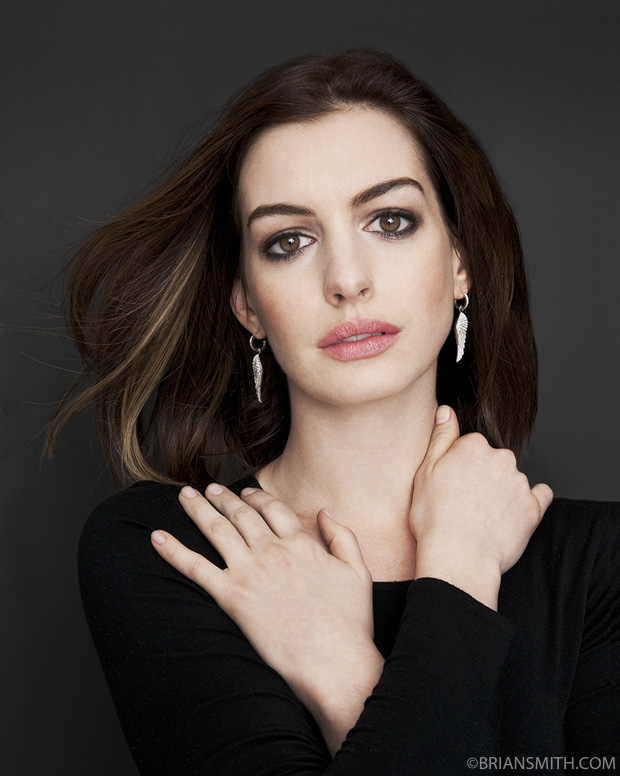 You keep an active Instagram catalogue of your travels and experiences. How have Instagram and other social media platforms changed the industry since you got your first big break in your early 20s?
“It’s so much easier to get your work out there today, which I think is a really good thing, but I think there are still many similarities, starting with the whole concept of ‘Big Breaks.’ When I’m asked about that subject, I could say that my first big break came at 19 when I was working as a stringer for United Press International. Yankees catcher Thurman Munson died in a plane crash, and I volunteered to drive across Ohio to shoot the funeral. One of my shots of Yankees manager Billy Martin in tears ended up nearly full page in LIFE magazine the following month, just as I was starting journalism school. While you could call that a ‘Big Break,’ it really just opened the door to the internship I landed the next summer that led to a job offer after I graduated. There’s rarely such a thing and a single Big Break that sets you up for life. I prefer to look at a career trajectory as a series of small breaks that lead to the next small break and the next after that.” 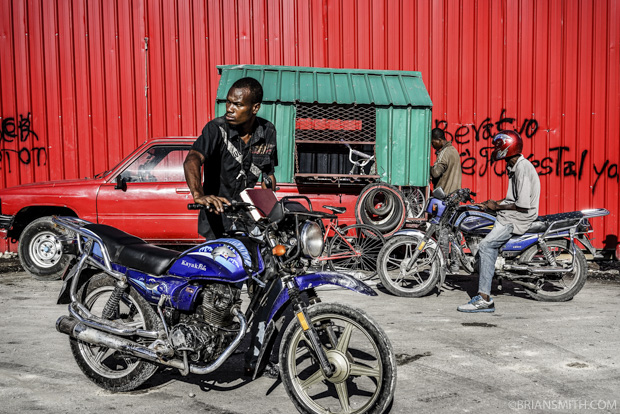 How has the field changed in the 30 years you’ve been in the business? How has your personal practice changed, if it has at all?
“The good news is that thanks to camera technology, it’s never been easier to produce great photographs, which has led to a huge interest in photography.

“The bad news is that’s it’s harder to get paid since everyone is a photographer today. To make a living, you’ve got to offer your vision. Good technique alone may not be enough.”

Tell us about Art & Soul and the process of creating and editing the book.
“Dream shoot of all time! It all started with a call from Kayla Lindquist, who runs the Sony Artisan program. She asked if I’d be interested in shooting portraits of actors and actresses at Oscar Week for a book to support arts and arts education funding. We partnered up with The Creative Coalition, and everyone I photographed was really passionate about the arts. After I shot them, we had a notebook in which they wrote what the arts meant to them, and these hand-written pages would serve as the text for the book. We were just four hours into a 3-day shoot when we all knew we’d really hit a chord, so we immediately began planning more shoots to keep it going and bring more voices to the project. Before we finished, we took previews of the project to the White House and Capitol Hill as a way to advocate for the value of arts funding. The toughest part of editing was narrowing it down from 250 portraits because we only had room for 123 in the book. We tried to tell as diverse a story as we could about how the arts enriched people’s lives.” 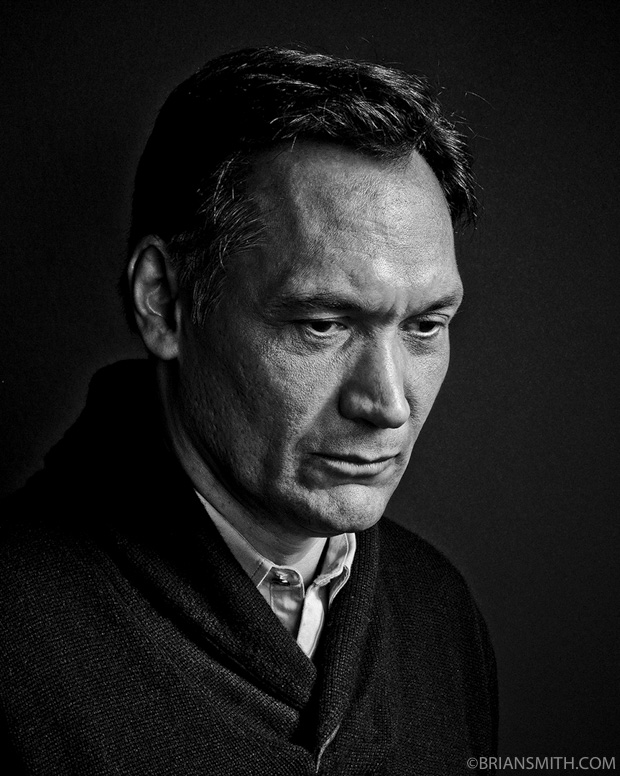 How did you become a Sony Artisan?
“In the Spring of 2008, I was approached by Kayla Lindquist, who asked if I had any interest in testing Sony cameras and lenses and giving Sony feedback for a fullframe camera they were developing for pro photographers. I jumped at the chance because I loved the idea of auto-focus Zeiss lenses. After using the gear for a week, I gave them a list of 20 things pros would expect from a pro camera. I figured they’d take one look at the list and write me off as a pushy jerk since other camera companies aren’t exactly open to user feedback, but that fall, I received a pre-production a900 along with an offer to become one of the original five Sony Artisans when the program launched. Later that month, I sat down with one of Sony’s engineers, and I still remember what he said, ‘What did we do right? What did we do wrong? What should we do next?’ With those words, I was hooked. That’s been the way it’s been ever since. Sony is always looking ahead to their next breakthrough in technology.”

How has mirrorless technology changed the way you shoot?
“Well, first off, my back and shoulders feel a lot better when I do. I love the versatility I have to use virtually any fullframe lens ever made on Sony mirrorless cameras. Seeing exposure in real-time allows you to concentrate on what’s in front of your lens, without the need to chimp the image on the back of your camera.”

What is the major difference between mirrorless and DSLR?
“Most people would point to the size, and while that is certainly an advantage, I’d point to the technology and flexibility of the system. Mirrorless cameras are able to do lots of things that are not possible on a DSLR. Initially some people are a bit taken aback when they look through an electronic viewfinder, but once you realize that you can see and adjust exposure in real-time, it’s hard to go back to an optical viewfinder. Though I shoot with native glass 90% of the time, I love that by using lens adapters I can mount virtually any full-frame lens ever made on my a7 series cameras.” 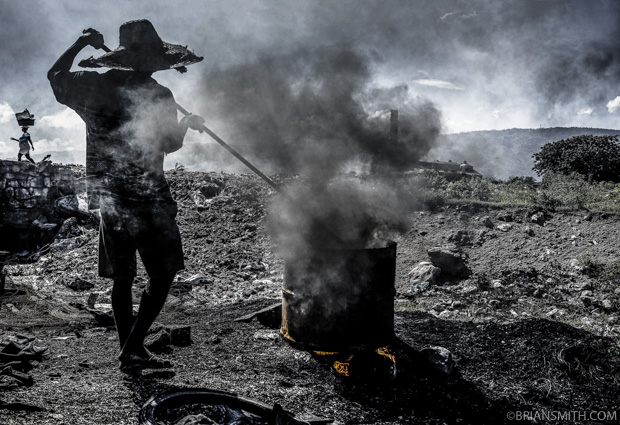 Tell us about the focusing advantages with the Sony mirrorless cameras.
“There are a number of tools like focus peaking, focus assist and focus magnification that you don’t have with a DSLR. Focus magnification is my favorite. I program one of the custom buttons so I can magnify any area in the scene for critical focus with just a press of my index finger.”

Did your lighting setup change at all when you switched to mirrorless?
“For portraits, I still shoot mostly with Profoto strobes, though I don’t need nearly as much power as I did shooting medium format. I like that due to the extremely high sensitivity of a7RII and a7SII sensors, I can shoot with minimal light. For the Sony a7SII press event, I set up a shoot of New York burlesque dancer Amber Ray lit with with nothing more than a black light and tiny LED light, and the images looked like they were lit with a much bigger set-up.”

Did you downsize your gear when you switched to mirrorless?
“You’d think that would be the case, except that now I can use almost every lens I’ve ever owned, and at the speed that Sony keeps cranking out new and better cameras, I’m not certain I will down-size. What I will say is that I take less gear with me when I head out to shoot.” 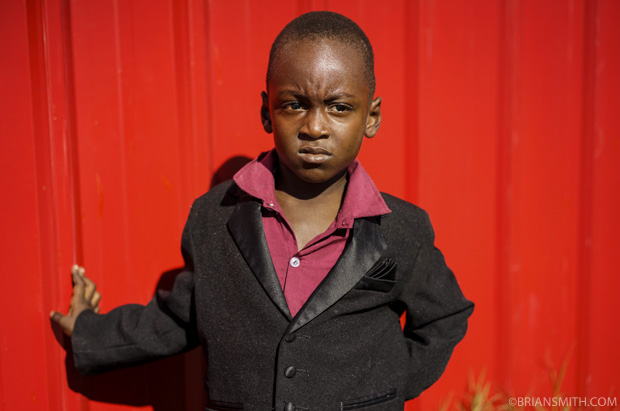 You shoot a lot of commercial work. How do people/your subjects react to such a small camera?
“They love it, especially when we’re shooting tethered to a computer 30-inch monitor. They do a double-take when we zoom in on the detail in a 42mp a7RII image and they see medium-format quality from such a compact camera.”

What are you most excited about working on right now?
“The next thing. The best thing about being a photographer is that it’s a different experience every day. It can be a winding bumpy road at times, but man oh man, what a view…” 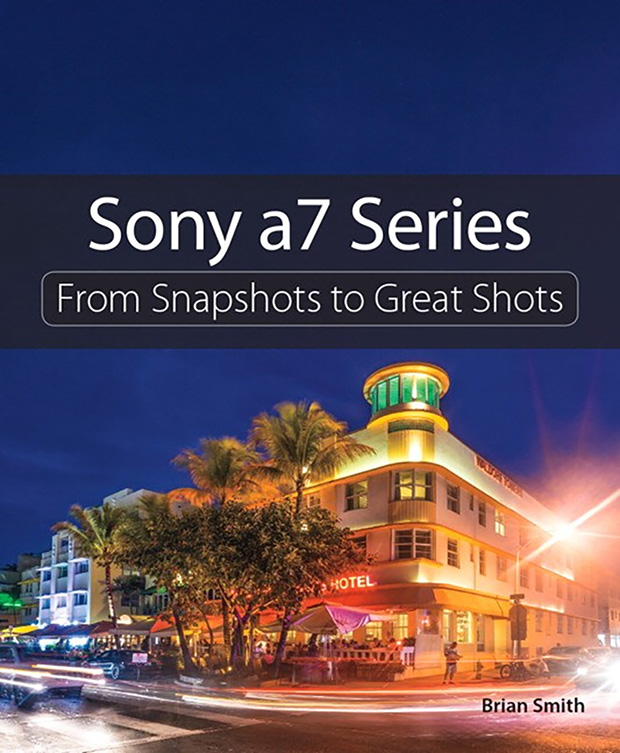