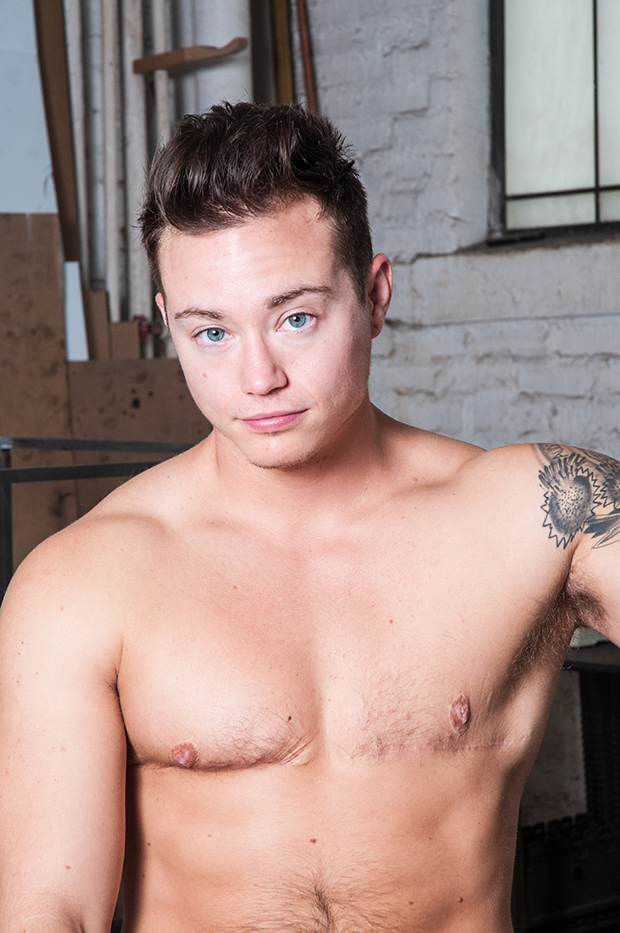 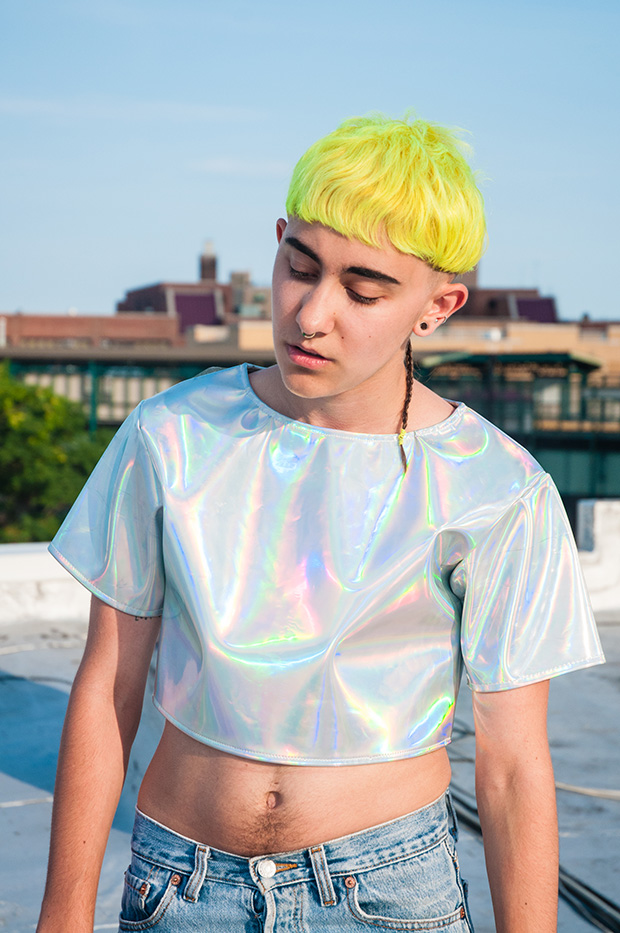 There are so many people in the world who have not had the privilege of a realistic or fair representation. The framing may be wrong; they may be fetishised as a subject, or perhaps the angles are pushed forward with a strange kind of inherent bias. It’s prevalent in all forms of art, in television and in film, but in photography these discrepancies become even more apparent. Only 8 black women have been on the cover of vogue in its 132 year history. Trans women or trans men certainly have not been at all. The fashion world is still invested in superiority, especially when it comes to beauty. But it feels like things are changing slowly, and as always, those who have been pushed to the side work twice as hard to show their work (which is often twice as interesting and genre breaking.) Amos Mac exemplifies this artistic fashion resistance.

Mac recently shot the campaign for & Other stories with models Hari Nef and Valentijn Di Hingh, and his work has been published in the likes of The New York Times, Interview,Vogue Italia, BUTT Magazine, Capricious, RANDY and OUT. Pretty impressive, and when you realise he’s also the editor of Original Plumbing, a magazine for trans men, it begins to sound like he’s a kind of artistic superhuman. Being creative, juggling jobs, and pushing with your passion is very difficult, and in an industry that prioritises whiteness, thin-ness and heteronormativity, the spotlight of trans issues doesn’t always translate into success for those involved. It may instead lead to exploitation. It feels like a blessing that we have creatives like Amos to battle these dichotomies.

Amos doesn’t just photograph trans people, but LGBTQIA artists and models of all persuasions. It feels pertinent that they all seem fully vulnerable, safe and connected with the photographer in the work. Whether it’s Hunx and his Punx hanging out in a cemetery, his bare chest exposed, Ssion slouching on the toilet, or the trans women of NYC hanging out in their apartment, confident and ready. Amos Mac celebrates the chemistry of common life. His work is often light-hearted but nonetheless compelling and diverse.

My interview with him revealed someone very down to earth and confident of the work he was doing. It was hard to notice any semblance of ego, any arrogance, but instead, a more deserved pride of his work and what he has worked to create. 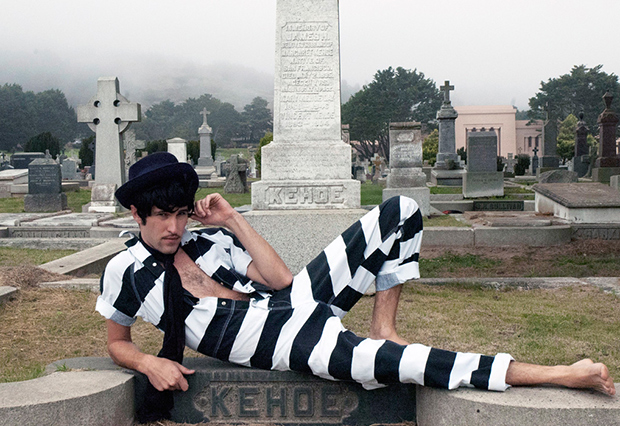 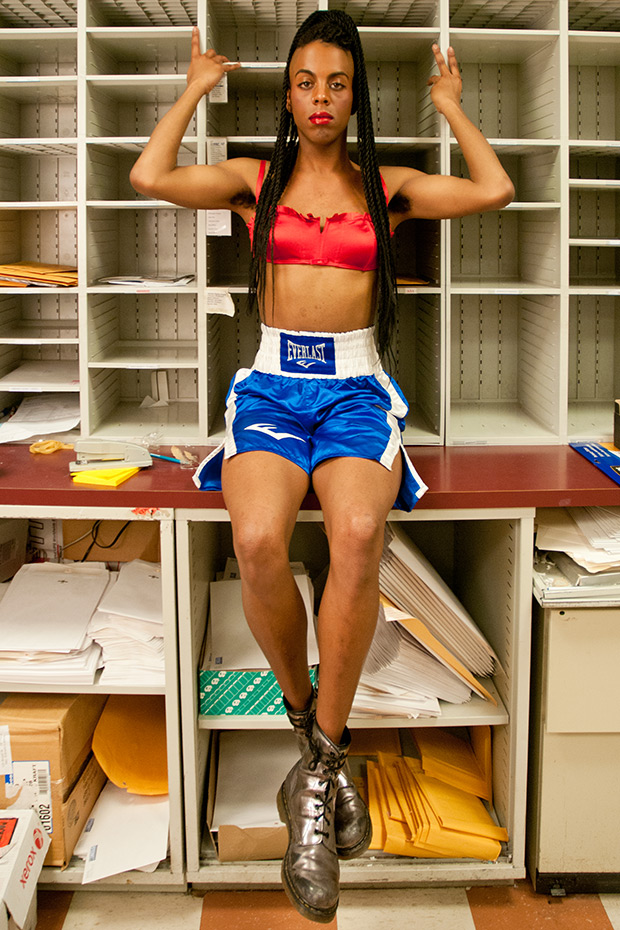 Introduce yourself and explain how you see yourself and your work, and what you’re trying to achieve with your work.
“My name is Amos Mac; I’m a photographer, writer, editor and magazine publisher. With my work I’m always trying to show the people around me and give a voice to the subjects I document. Lots of times with my photo work, there will be text by the subject or an interview to go along with it, so the photograph will not stand alone, although I have plenty of solo photo work not linked to text. I’ve always loved documenting moments and human experiences. A lot of these experiences are trans in some sense of the other. Trans visibility is important to me, but also allowing my subjects to speak for themselves along with the photographs holds great importance.” 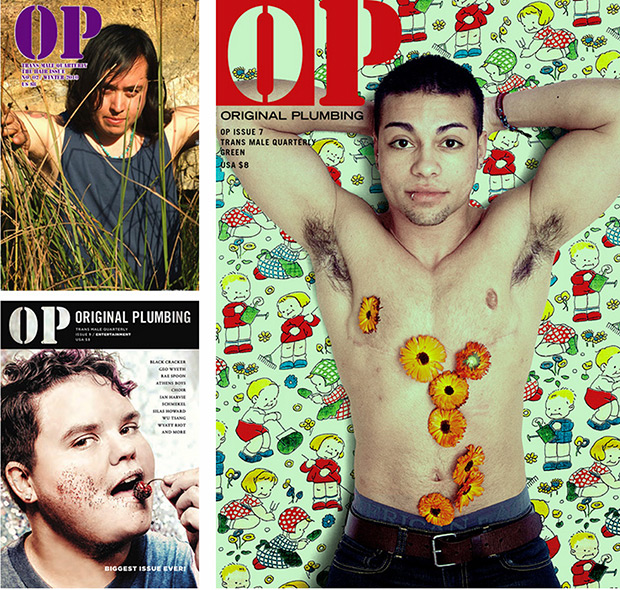 Do you feel like running your own magazine, becoming a sort of curator, made you more aware of what you were doing with your photography and affected your style?
“At times I find myself shooting ‘for a magazine’ and wanting to get a shot that I know would work on a cover or for a spread, but if anything making a magazine has allowed me to edit my work differently and see the broad spaces my work can end up, from magazines, museums or in advertisements.”

Talk about the current state of Original Plumbing and how you’re feeling about it at the moment.
“OP has been going for almost 17 issues now, and through the years, so much has changed in the world around trans visibility. Even after all these years, [co-founder] Rocco and I have gone on many different career paths, but at the same time, we have always stayed tied to Original Plumbing. It’s incredible, the feedback we continue to receive, often from young kids who are just finding out about the magazine as they begin their transition. This September will mark OP‘s 6th year exhibiting and tabling at the NY Art Book Fair at MoMA PS1, which is my favorite event of the year. I love meeting new people there who are excited to learn about the magazine.” 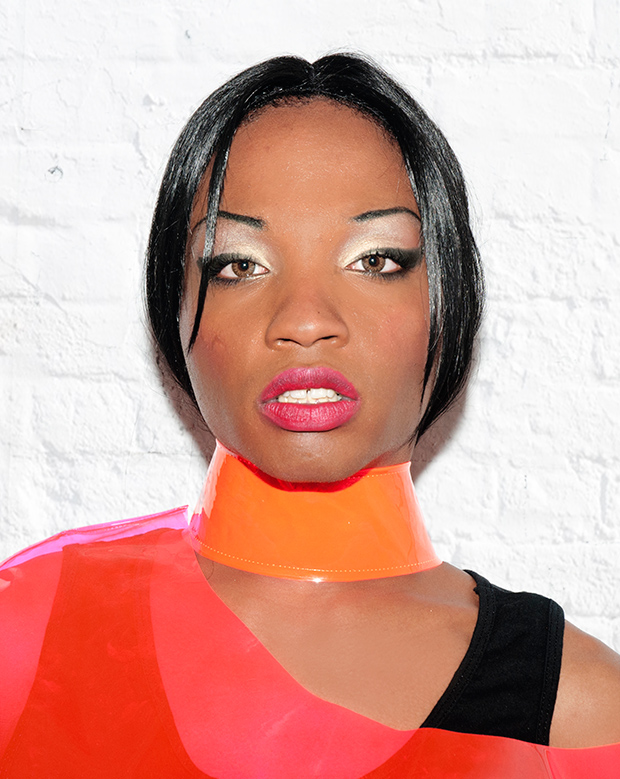 I feel like your work is very humanizing and open to all sorts of people. It’s sad that it’s still considered progressive or revolutionary to do this. What is the importance of being a photographer who uses a diverse range of subjects, models and ideas?
“Besides diverse subjects and models, the ability to give them a space to share their own story outside of their photograph is also a rare thing when it comes to trans and gender non-conforming subjects, or so I’ve noticed. Celebrating the human experience and having diverse subjects, life experiences and gender identities is so important to show peoples truths in varied degrees.”

How do you draw the line between objectification and documentation? You’re right, your work does show a non-judgemental approach to photography, the people in your photographs look very at home and happy to be with you.
“During my shoots I try to check in and make sure the subject is comfortable, to see if sure they’re okay with the direction the shoot is going in. I don’t like to force people into positions they wouldn’t want to showcase to the world within my work; that isn’t my style.”

How did you get involved in the & Other Stories campaign?
“The & Other Stories team approached me about the campaign via email, then we talked on the phone and the next thing I knew, I was in Stockholm, jet-lagged, camera in hand.” 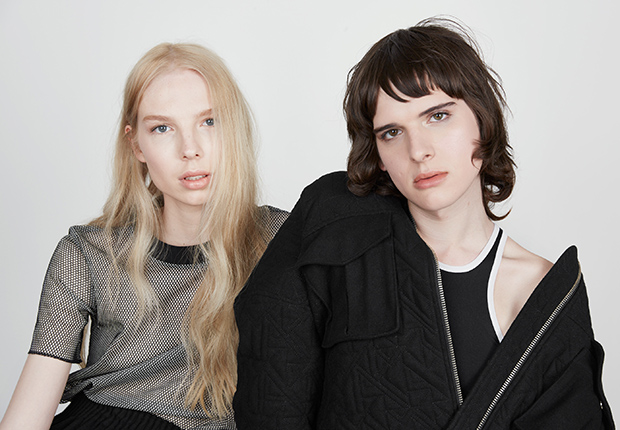 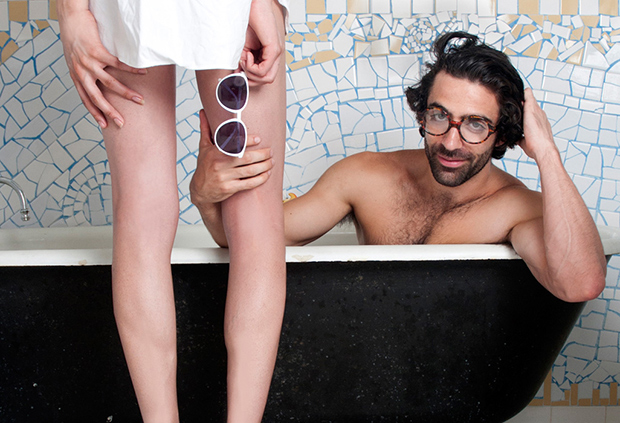 What was it like working with an all transgender cast, as opposed to other situations you’ve been in?
“Working with a team of other trans people was rad. Nina, Bailey and I landed at the same time and walked around Stockholm in a jet-lagged daze that morning and walked around the city while we waited to check in to our hotel. I was so elated to work with Hari and Valentijn, both of them in one shoot, it felt like I had won the lottery. I have a history of collaborating with trans people, so to create a high profile body of work around fashion with an all trans crew made me feel some serious feelings for sure.” 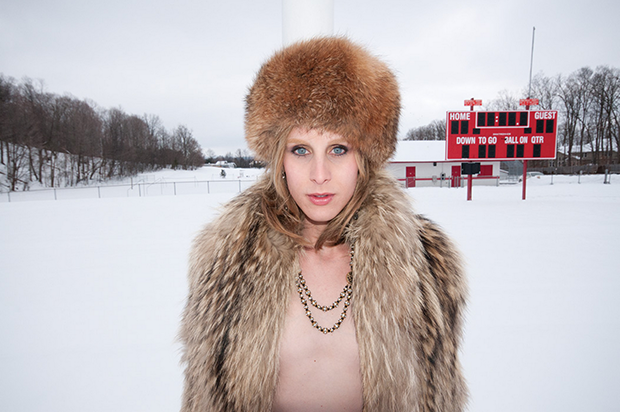 Do you have any favorite photo shoots that you’ve done?
“So many are memorable moments — my shoot with Zackary Drucker that ended up becoming our collaborative series and the photo art zine Translady Fanzine, is one of shoots that resonates with me. It lasted for a few days over Christmas and was shot within and around the house she grew up in, in upstate New York. And of course the  & Other Stories images are so new; it feels very “favorite” to me at the moment.

What is most important to you right now, in general or within your work?
“In life, the longer I live, the more I find friendships, chosen family and experiencing life off-line more important than anything else. With my work, these days I enjoy shooting professionally with teams where I feel like each person brings something to the project, so I’ve been doing less solo work. In the beginning it was always just me, my camera and the subject, and although I cherish those times and still shoot that way, I’m more inspired by larger team oriented shoots where it feels collaborative.” 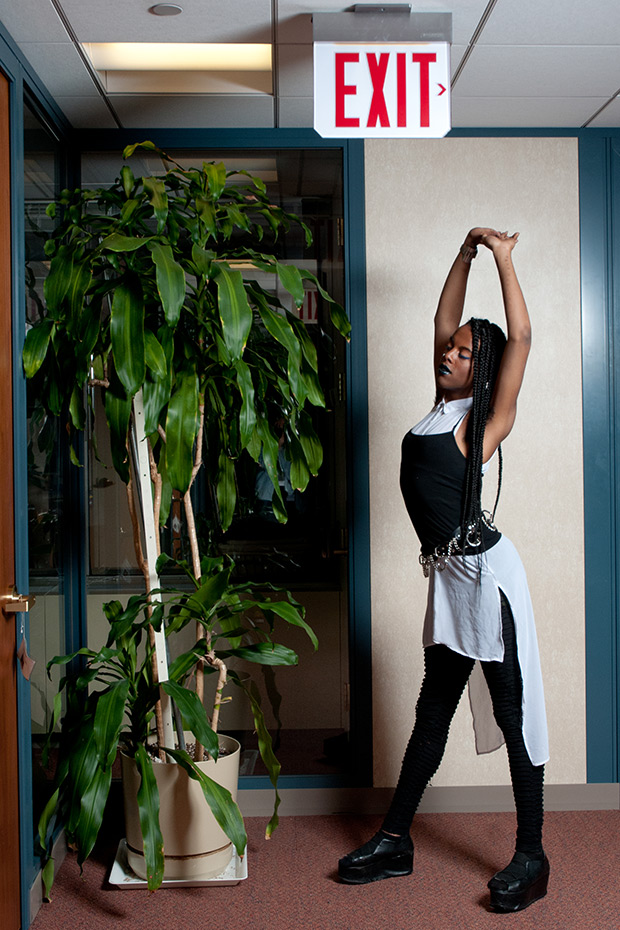 Do you have any projects you’re excited about in the future?
“I’m about to shoot trans* youth for a project, but cannot disclose the details just yet because it is top secret! Stay tuned. I am also working on issue 17 of Original Plumbing, which is all about tattoos!” 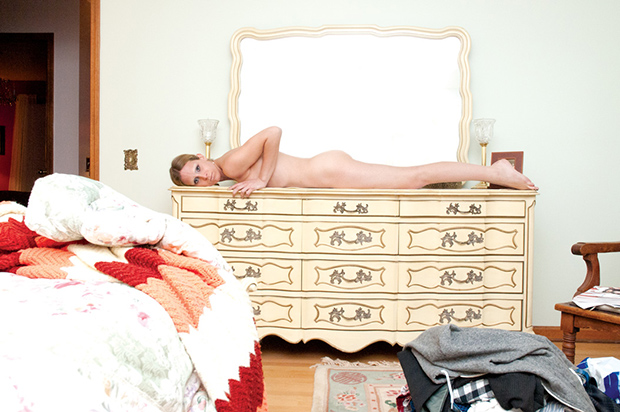