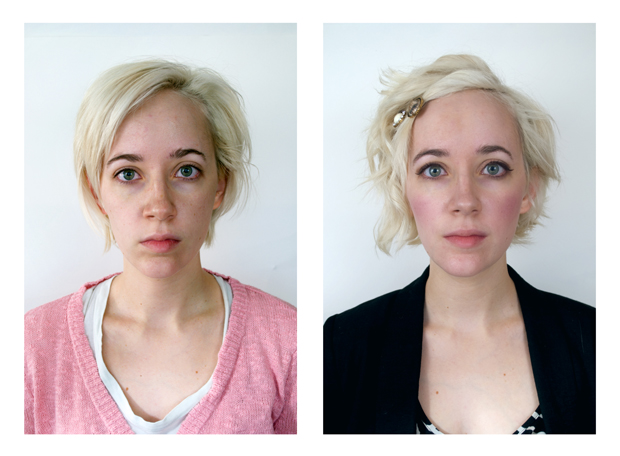 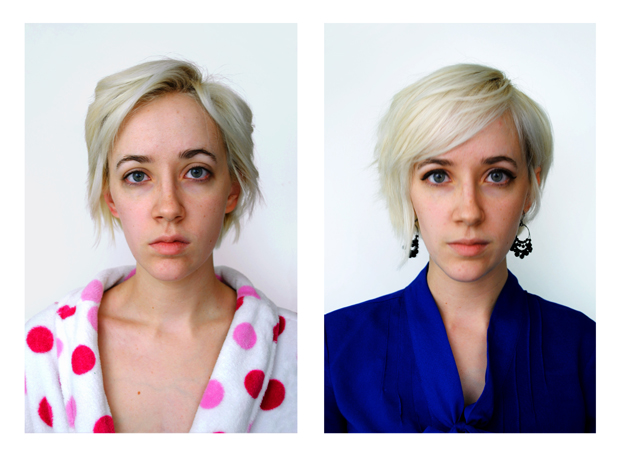 Mel Keiser’s Becoming Mel is a series of paired self-portraits—one taken immediately upon waking, the other after she’s put herself together for the day—repeated each day for a month. The series resembles a before-and-after beauty feature, but Keiser, a brainy Chicago photographer and artist, has more on her mind than lip gloss and hair style. Her work asks you to look at the gap between sleep-blurred Mel and bright-eyed Mel and rethink what you know about identity and the self.

Start by comparing Mels: Sleepy Mel looks into the camera, squinting, one eye almost closed, an Elvis sneer forming on her lips. Her hair is wild twist of undergrowth. The two moles on her pale sternum render her somehow piercingly vulnerable. The overall effect is a bit raw, thin-skinned, emotional.

A shower, a trip to the closet, a minute in front of a mirror, and a new Mel emerges, a more polished being, ready for the day. Her smudged pout has sharpened into a half-smile, her eyes are now wide, cheeks rouged. Her hair is a soft, orderly helmet. Her shoulders are covered by a prim ultramarine blouse and dark blazer. Her skin is smoothed by makeup. Big, round earrings dangle and echo her wide, slightly stunned eyes. She is still but not serene.

“The first picture is taken immediately upon waking, before I have a mental concept of my identity or self-image,” Keiser explains, “The second picture is taken after I begin to feel like ‘Mel,’ usually after my physical self begins to reflect what I believe ‘Mel’ looks like.” We wonder who the “I” is who stands apart and believes something about what “Mel” looks like. We’ll call her “Keiser,” and leave it at that, except to suggest you pursue further reading in neuroscience, consciousness, and philosophy if you want to unravel some of the implications of Keiser’s work.

Keiser says that Becoming Mel is inspired by recent dramatic advances in understanding of the brain and cites writers such as David Eagleman, Oliver Sacks, and V. S. Ramachandran. She talks about these thinkers the way other artists might cite Cindy Sherman, Nikki S. Lee, or any of the many photographers whose work examines the mechanisms of identity and whose theoretical underpinnings tend to be derived from “softer” disciplines like psychology or sociology. Keiser’s work adds a hard-science wrinkle to the ongoing discourse on identity.

Still, you don’t have to worry about neuroscience to appreciate Keiser’s take on what makes up the self. A wealth of more down-to-earth opportunities for study (and pleasure) are available: Keiser’s colorful wardrobe, for one, her hair, a catalog of unruly shapes tamed into soft bobs, for another. Study the grids and see if you can deduce the days of the week by her outfits. Wonder how often she rotates the purple tee shirt. Try to guess what she is preparing for on a given morning—a job interview or a day at the park. All these details add a welcome lightness. Funny as the work may be—and it is—it is also fringed with anxiety.

Keiser talks about an experiment in which subjects are temporarily rendered unable to recognize themselves. She says this “makes identity terrifyingly fragile in its existence.” Keiser’s humor looks simple enough at first glance, but it is a giggle tinted by fear. She offers a deeply skeptical and disquieting new way of looking at an old problem. 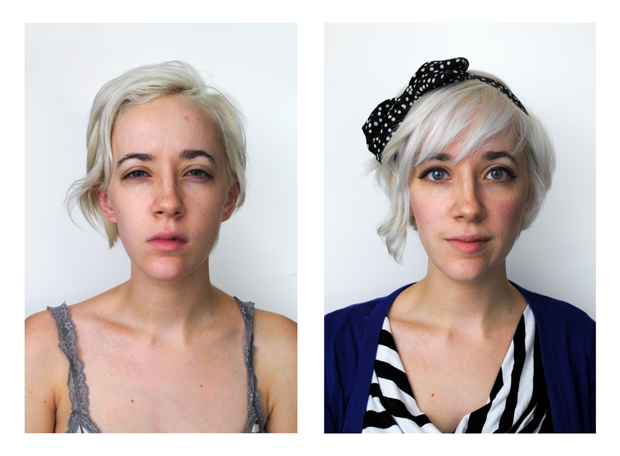 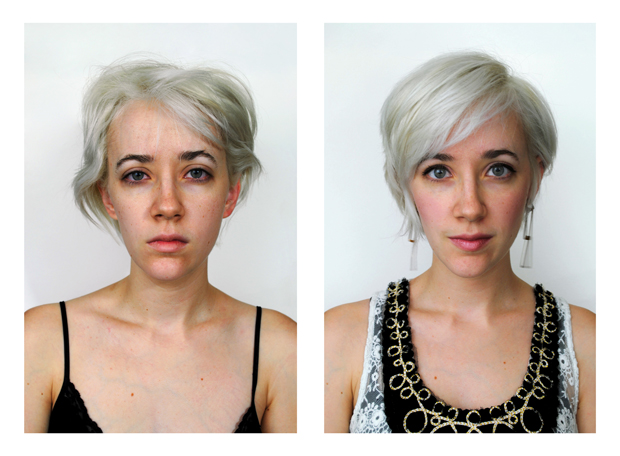 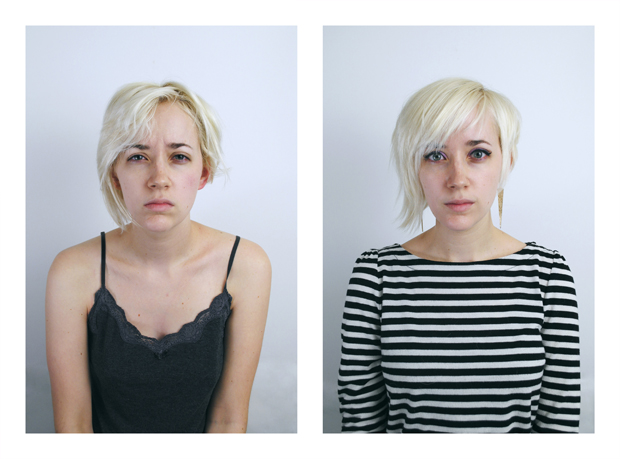 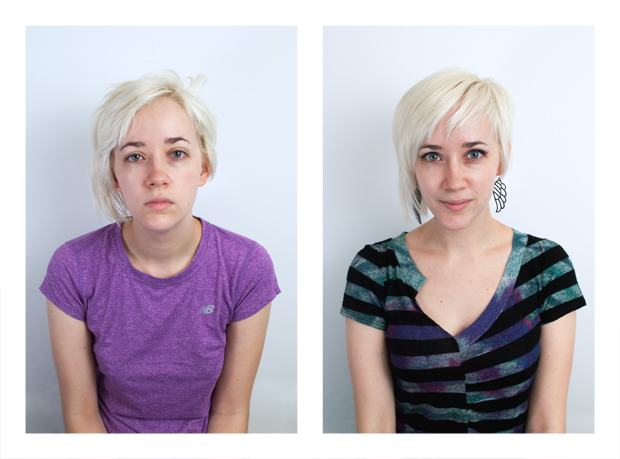 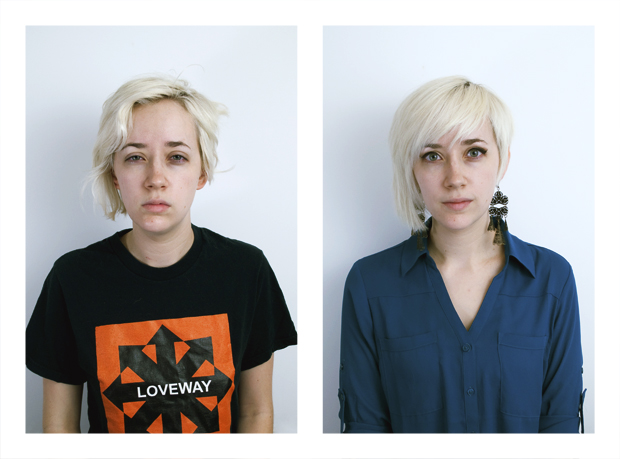 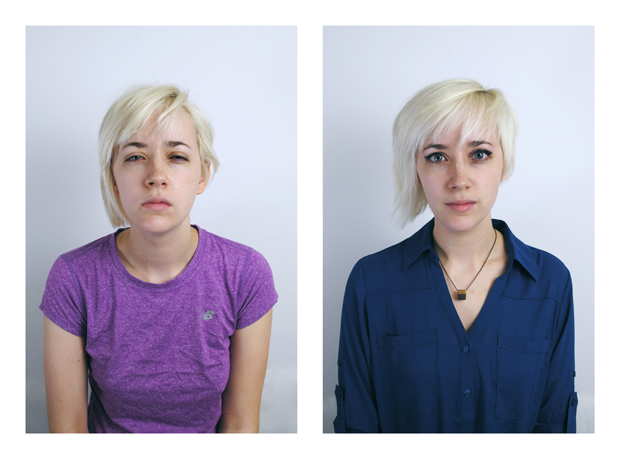 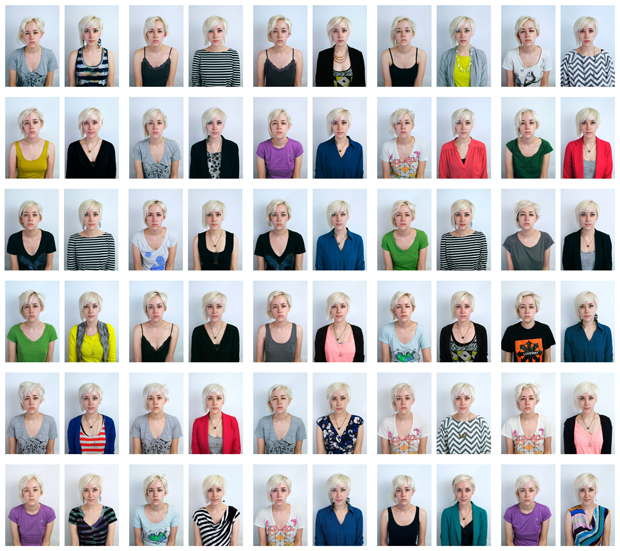