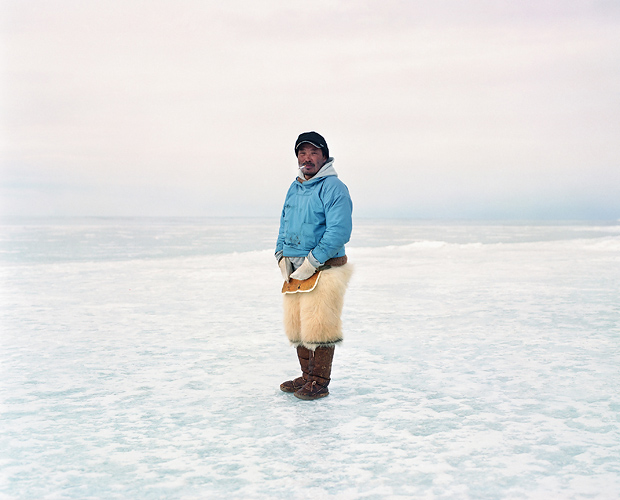 Although traditional boots (kamik) and pants made from animal hides and furs are still used during the hunt, more modern materials are also appearing. 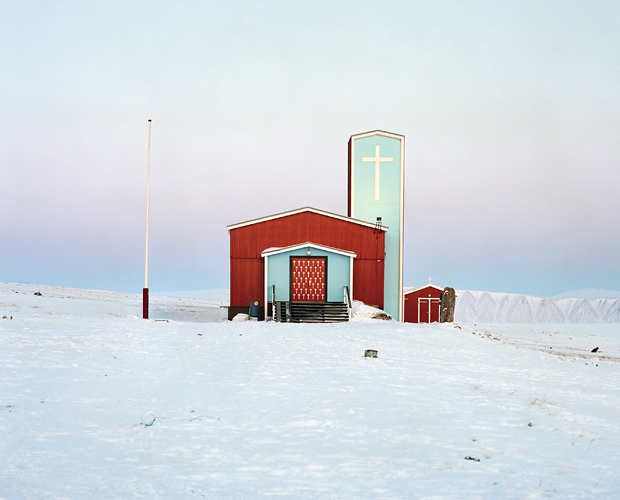 Qaanaaq’s wooden church on the outskirts of town in the midnight light of April. 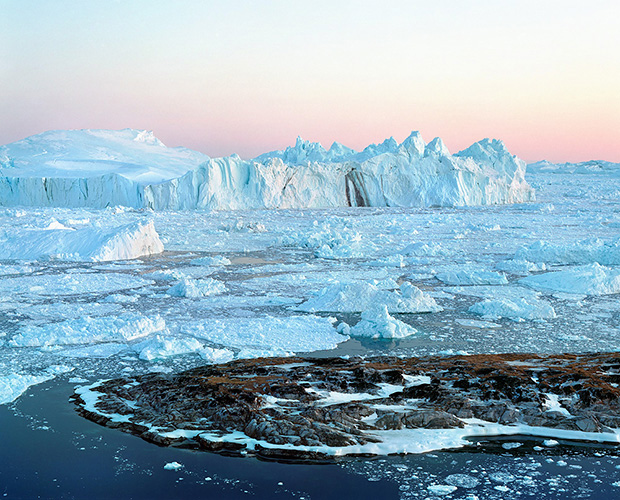 Icebergs to the south of Ilulissat, home to one of the largest icefjords in the world which features on UNESCO’s World Heritage List. In the Inuit language Kalaallisut, “Ilulissat” means “icebergs.”

Ever since he was a young boy, Sébastien Tixier wanted to go to Greenland. His father had told him stories about the “Eskimos,” and young Sébastien imagined them, the Greenland Inuit, in their thick animal skins, living on the ice, surrounded by soaring cliffs of untouched snow.

In 2007, he became a photographer. He crafted highly stylized images reminiscent of scenes from a David Lynch film. He went to Japan to shoot the deserted island Hashima, then to Siberia to document the Trans-Siberian train ride. He won awards. About two years ago, those childhood images of Greenland suddenly came to mind and he thought, “Why don’t I go?”

What Tixier saw when he finally went into Greenland disassembled his doe-eyed enchantment with the place, transforming clichéd images of white landscapes into something more meaningful. It’s inspiring when a longstanding dream leads a person to act on it, only to discover the unexpected, not just about something that has fascinated them for so long but about themselves.

I spoke by video with Tixier, who has a strong French accent, about the project. He struck me as introspective, quietly confident and open. 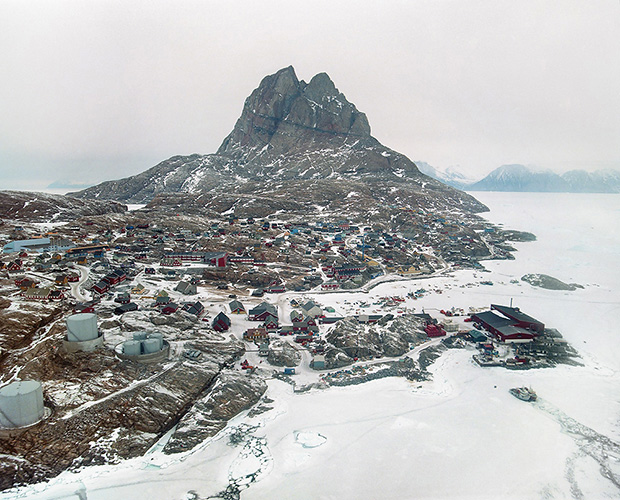 Arriving at Uummannaq by helicopter. The town is built on a small island, with a mountain that peaks at 1,170 meters. “Uummannaq” means “heart- shaped.” 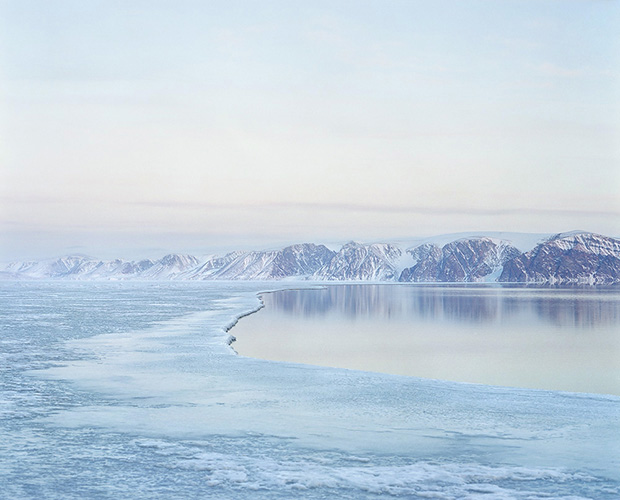 On the sea ice looking down at the sea, at the very point where the ice meets the open water. The town of Qaanaaq is about forty kilometers to the left, and our camp is just 20 meters behind me.
You took a year and half to prepare. That’s a long time.
“It’s not easy going to Qaanaaq. You never know if a flight will be canceled due to the weather. It’s also an expensive trip, so I needed to made sure that I would be able to get the images I wanted. Then I had to learn the language.”

How did you learn the language if there are no books?
“I was able to find one small book in French, but it had no grammar. I ended up Google-translating some academic papers in Danish on the Greenlandic language, then I made my own grammar book to take with. That process took me quite a while.” 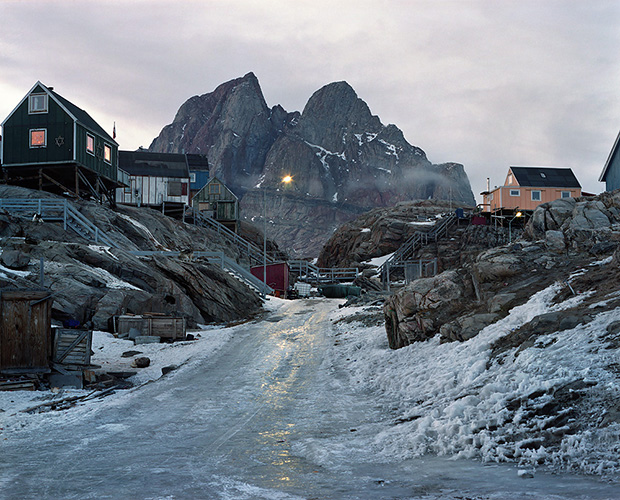 Many houses in the north of the country do not have access to a developed sewage system: wastewater flows from homes and freezes in the streets. Toilets are, however, serviced by a specialized municipal collection team. These new jobs reflect Greenland’s quest to secure its own financial independence as it embraces a more Western lifestyle.

Did you have a romanticized view of Greenland from your childhood?
“I think so. When I arrived in Greenland, I was constantly amazed at how things were not as I had expected. For example, I met a little orphan boy who wants to be a mixed martial arts fighter when he grows up. He got this from watching Caged on MTV. I was amazed. When he went outside he played with his sledge, but his dream was to get totally away from Greenland culture and embrace MTV culture to the extreme.” 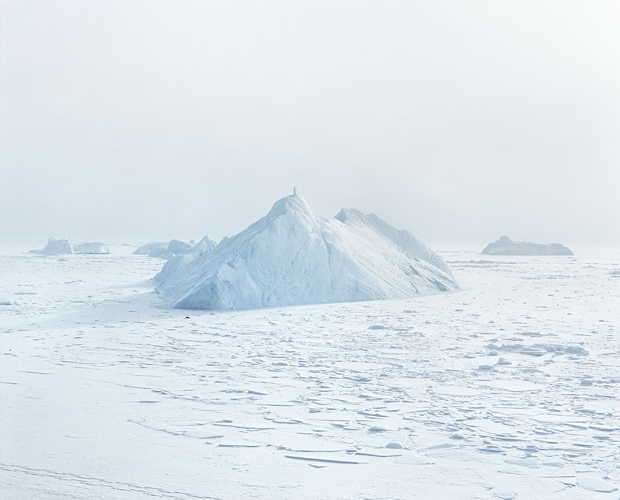 Icebergs stuck in the ice. For an idea of the scale, the black spot at the foot of the nearest iceberg is a group of abandoned tarpaulins. 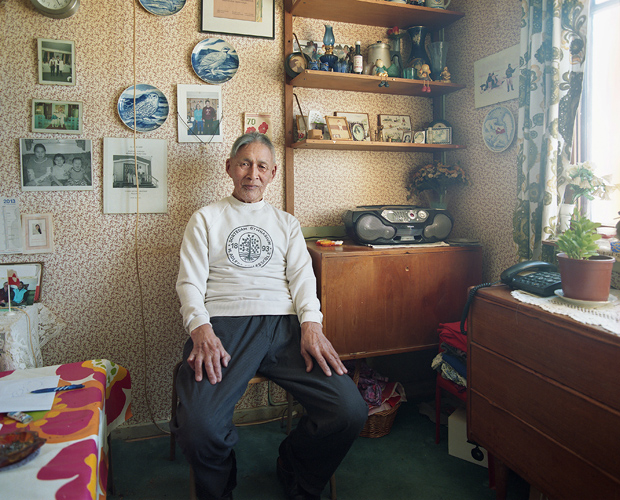 When you were looking to capture western culture, what grabbed your attention?
“I wanted to find places that symbolized a changing direction in the culture. At one extreme, you have Qaanaaq, one of the northernmost towns in the world, where people still wear furs and hunt seals for a living. At the other, you have big cities like Nuuk, which has everything you’d find in the western city—movie theaters, discos, bars. I wanted to find situations that blend the dying Inuit tradition with western culture. So there is a picture of a home interior with a seal carcass hanging from the ceiling. Or that picture of hunters on sea-ice, all wearing furs but they have cellphones. These elements were melting into each other.”

You used a wide angle lens to capture the seal hunters, keeping them at a distance. It seems like you wanted the viewer to enter into the landscape?
“That’s the idea. I have some close-ups. They are very graphic and tend to make people see it as a violent act. It is, for sure, but this was not hunting for fun. It was for food, so I did not want to corrupt what I was showing with images that people might overreact to. I found that at a distance you still understand what the hunters were doing, and in a way, there is more intimacy.” 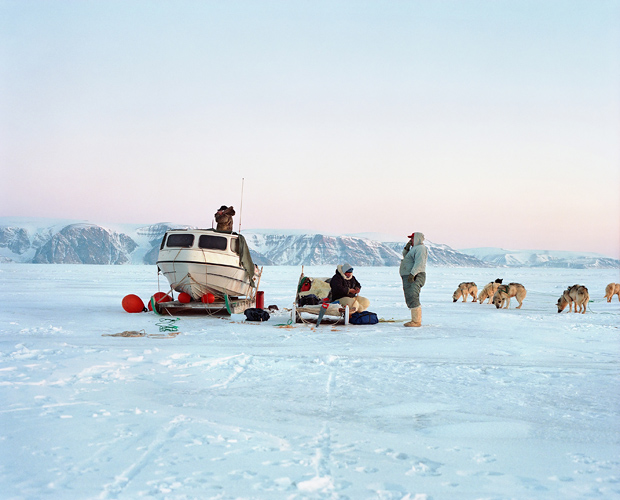 Hunting sea mammals still occurs in the north of the country and involves a seven-hour journey across 40 kilometers of sea-ice to reach the open water. To keep abreast of the shifting weather, cellphones are used frequently–a sign of the changing times.

So my sense is that seal hunting among the Inuit is a dying art. For centuries it helped them survive the severe climate, but if it’s not passed on it will be forgotten. What is your take?
“I’m no anthropologist, but I agree it is a dying art. All the young people I met in Qaanaaq are more interested in the latest cellphones, in Facebook. Schools are focused on teaching students how to cope in a digitalized society, then send them to Denmark to study. How would they have time to learn seal hunting? There may be some exceptions. With the hunters I joined there was one guy in his twenties, but that’s one out of eight.” 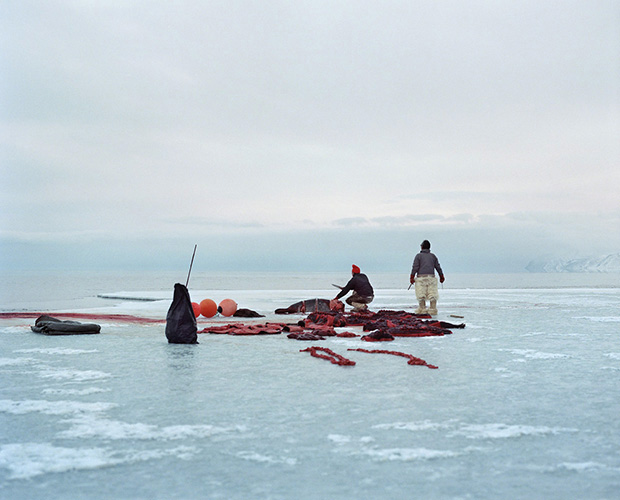 At the edge of the sea at around 1 a.m., hunters cut up the seals brought back by the boat after the hunt. The pieces are later shared out between the hunters, and left on the ice to freeze overnight.

Is this good or bad? Did this affect how you documented Greenland?
“One of the old hunters–who, much to my surprised, turned out to be an important politician who could speak English and had traveled the world as a representative of Inuit culture–told me that for him the biggest enemy in the world is Greenpeace. His view was, ‘We hunt seals because that’s what we eat and that’s what we wear, and if you forbid us to hunt seal, then that’s the end of the Inuit culture.’ This raises the question, ‘Should we push that culture to an end faster than it would normally go or should we preserve it?’ I can totally understand that the seal is a dying species, but at the same time the Inuit is a dying culture. I don’t feel I can say which it should be. The question is will the Inuit manage to keep their roots or will they melt completely into western culture?” 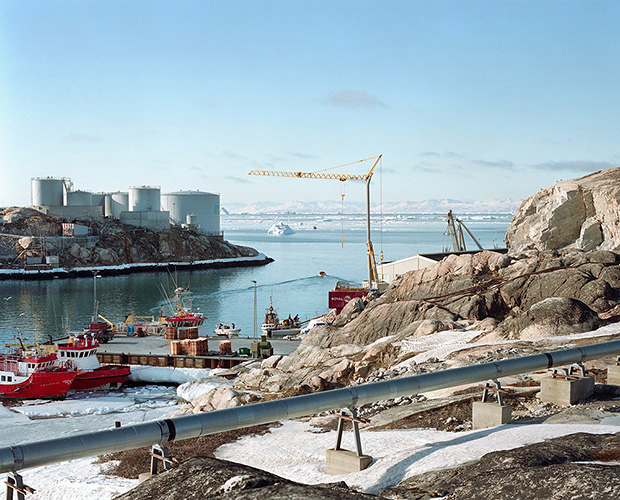 Ilulissat provides its inhabitants with the same services as any regular Western town, and continues to expand and grow. In the distance, behind the tanks, icebergs fill Disko Bay.

It’s appropriate that you use melting as a metaphor since, well, Greenland is melting.

“‘Actually, it comes from a Danish school teacher in Qaanaaq who, like most teachers there, is being paid by the [Danish] State to teach western culture to the children. She was asking herself, ‘Am I working for good or am I pushing the end of that culture even faster?'”

You were there for a month, and you said that every day your views on Greenland changed. Can you give me an example?
“When I went to Qaanaaq, I was expecting total isolation. Hardly anyone goes there. Even Greenlanders think of it as a mythical place. It turned out to be the total opposite. I was waiting for the plane from Iluisat to Qaanaaq, which only goes once a week, when by chance I met someone also going to Qaanaaq. Not only that, she was to be the translator for an American videographer. On the plane ride over, a white guy sat next to me. Turns out, he was there to go skiing. So on my very first day in Qaanaaq, where I had expected total isolation, I found myself in the middle of an infinite white landscape under the midnight sun sharing a bottle of wine with travelers, a polar bear on the ground beside us. It was incredible.” 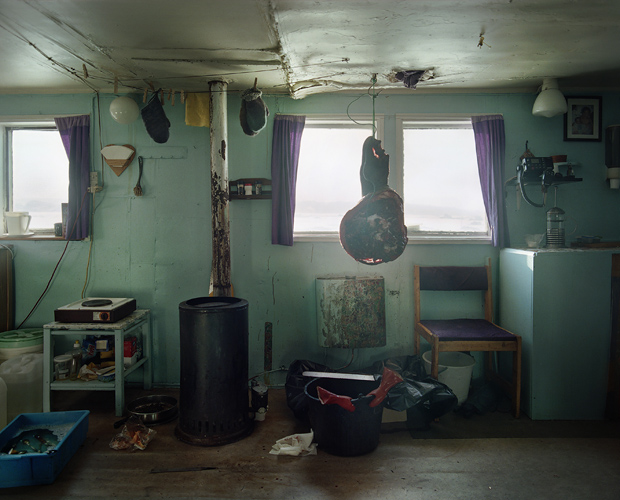 In 1953, the inhabitants of Qaanaaq were forced to relocate 100 kilometers north so that the U.S. Air Force could expand its military base in Thule. In compensation, the army built the first houses at the new location. They are identifiable by their small size, lack of running water, low ceilings and two sets of windows. Here, seal meat hangs from the ceiling.

Do you think it’s important for a photographer to be open to the unexpected or is it better to focus on something and try and find it?
“For my staged work, I prefer to stay focused. In Greenland, if I had stuck to my initial inspiration I would have five pictures of pure white landscape, period. That’s not the reality of Greenland, as I learned.”

What about this is a personal work for you?
“I don’t have the complete answer yet. What I do know is that I’m fascinated that there were people who decided to settle in a very hostile environment and say, ‘This is where we are going to live,’ which seems quite insane at first. What was their motivation? How did they decide this?

“From another perspective, I was talking with the American videomaker, and he said he wasn’t trying to run away from himself by going to Qaanaaq; he was trying to meet the other part of himself. This made sense to me. At first I thought I wanted to isolate myself to focus on some introspective part of me. But what I actually wanted to do was to get away from what I knew and discover something that I did not know at all.”

Sébastien Tixier’s self-published monograph for the project, Allanngorpoq, will be available in December on his website. 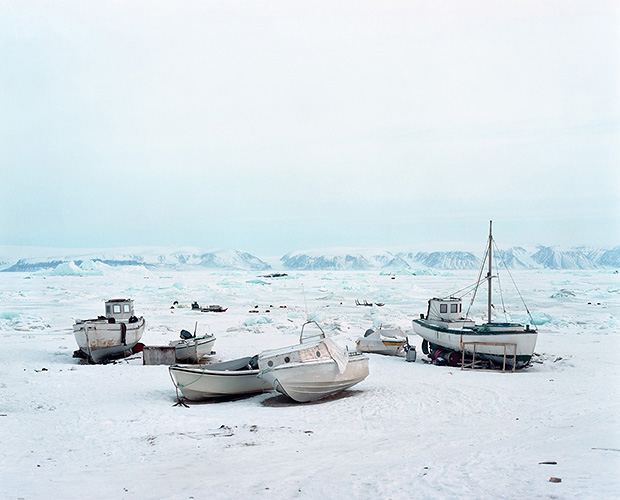 Boats on the shore in Qaanaaq, in the midnight light of April.

Karen Rester is a freelance writer based in Brooklyn. Her book collaboration with photographer Tanyth Berkeley, The Walking Woman, is forthcoming from Conveyor Arts in September 2015.