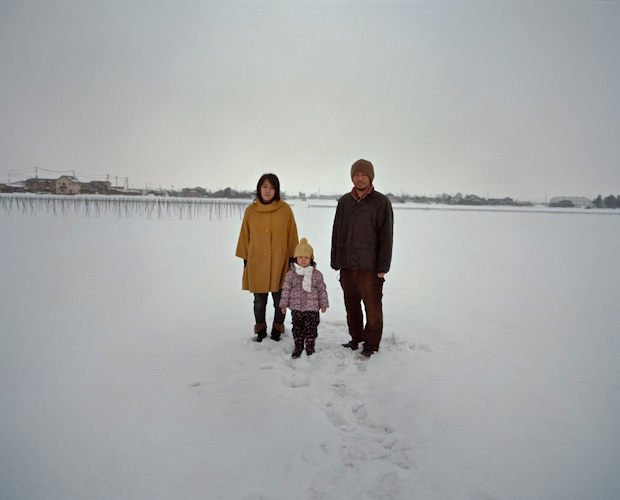 Nozaki and his family stand for a portrait in a snow covered vegetable field in the town of Aizuwakamatsu, Fukushima Prefecture. Nozaki and his wife are not overly concerned about radiation contaminating food and water, but how discrimination will impact the future for their 4 year-old daughter. February 2014. 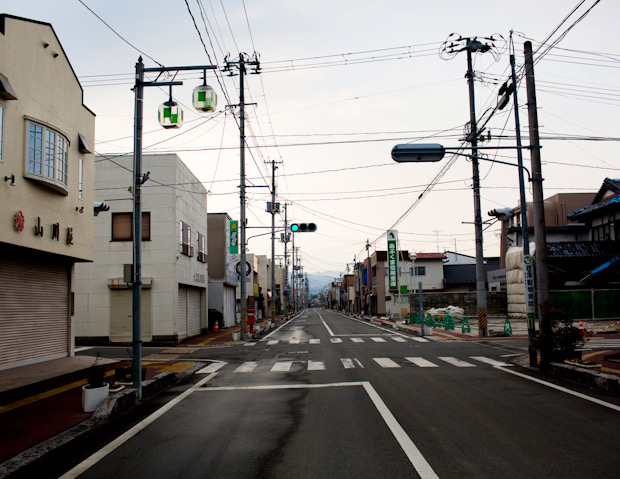 Main street in the town of Odaka, Fukushima, about 6 miles from the Daichi nuclear power plant. The city remains lifeless except for the sounds of grating coos of crows in the nearby distance. Residents may return for the day to survey the damage to their homes, but are not allowed to live in the city. March 2014

Life Within 90km is photographer Brian Driscoll’s reflection on the life of residents of Fukushima, three years after the earthquake and subsequent power plant explosion that left 160,000 people displaced and still seeking answers.

Driscoll travelled to Aizuwakamatsu, Fukushima in 2012 with no intention of photographing the devastation. He did, however, spend time to meet and talk with local people who were deeply impacted and concerned about the consequences of radiation. It was then he began to grasp an understanding of just how many issues were unfolding and how the lives of so many residents have been affected from the meltdown, not only in the “exclusion zone” but up to 90 kilometers (about 55 miles) away from the power plant. The connections he made with the people prompted him to return in 2014 with the intention of working on a photography project that would tell the stories of the people there.

Working on film, with a Mamiya 7, he wanted to slow down the process that would allow him to delve deeper into the problem’s faced by the people. Thousands of displaced residents are still living in temporary housing outside the affected area; the older residents who are deeply connected to their land would like to return home, while younger families with children are weary to return due to the lack of information provided by the government about the high levels of radiation in the area. There are many repercussions that come with learning to adapt to a new and unfamiliar environment; such as children’s health issues, deep depression, guilt, discrimination, marital discord, psychological difficulties, paranoia, and suicide.

Driscoll plans to return to Fukushima in 2015 to continuing telling their stories. 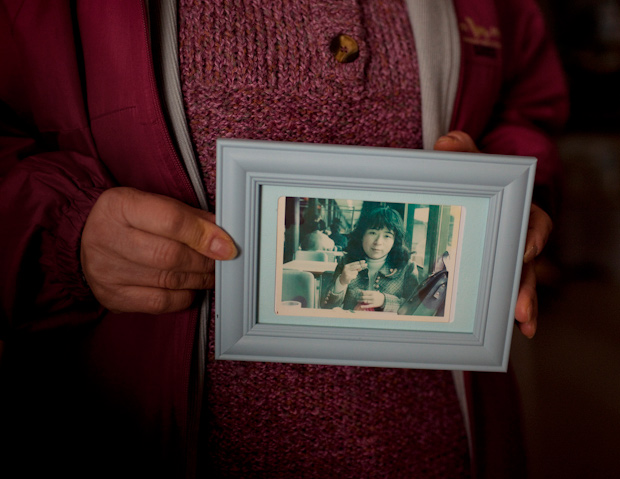 Tokiko Kitazaki, an evacuee from Tomioka-machi, Fukushima, a mushroom and rice farmer a good portion of her life and mother of two, holds an old photograph of herself when she was 25 years old. “Life is different now, ” she explains, “things will never be the same.” Tomioka evacuee houses, Koriyama, Japan. February 2014. 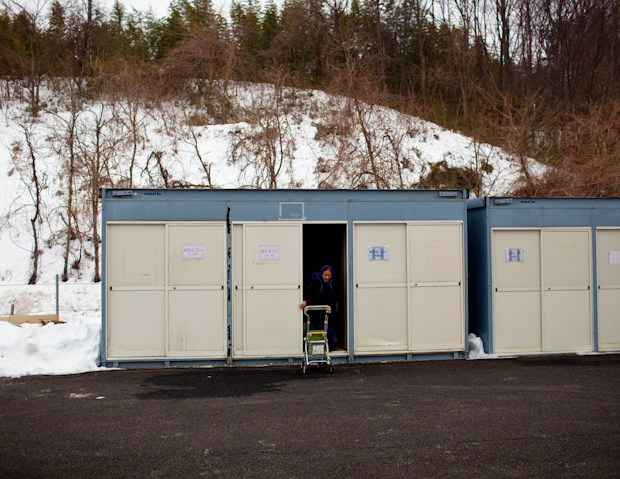 A resident of the Tomioka temporary housing units exits the dumpster after dropping garbage at the complex outside of Koriyama City, Fukushima. Most of the older residents are farmers and have been living there since they evacuated in 2011 and don’t see themselves going anywhere. Some people have packed a safe bag just in case of an emergency. Roughly 60 km west of the nuclear Daiichi power plant. February 2014.

Masumi Kohata, 58, a rice and mushroom farmer since the age of 23, a mother of three and a school teacher from Okuma-machi, Fukushima. A restricted area a few miles from the Daiichi nuclear power plant. Masumi and her husband evacuated from their home in Okuma-machi and have been living at the Matunaga evacuee houses in Aizuwakamatsu, Fukushima, since July 2011. According to Masumi, who was anti-nuclear before the nuclear meltdown, “local government never told the people of Okuma-machi about how high radiation levels were days after the nuclear meltdown and three years later, they are still not providing any important information,” says Masumi Kohata. March 2014. 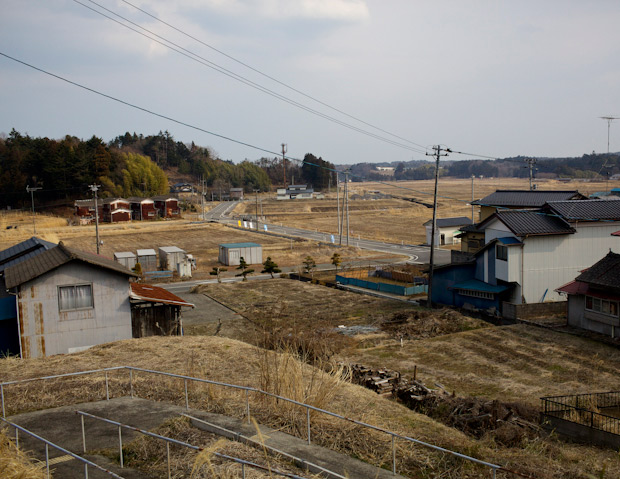 Abandoned homes sit in an empty radiation-contaminated farmland near the Momouchi Station, about 6 miles from the Daiichi nuclear power plant. March 2014. 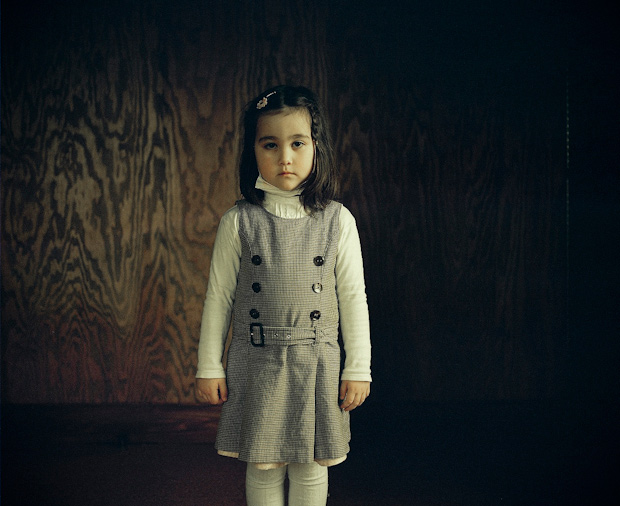 Hannah, 5, stands for a portrait at the Aizu center in Aizuwakamatsu, Fukushima. Hannah and her family are evacuees from Aizu to Fukui prefecture, which is located in the north-central part of Japan. Her mother, who is Japanese and her German father not only fear that radiation levels are too high for children and local government is not telling the truth to the people but also how discrimination will impact their child’s life in the future. March 2014. 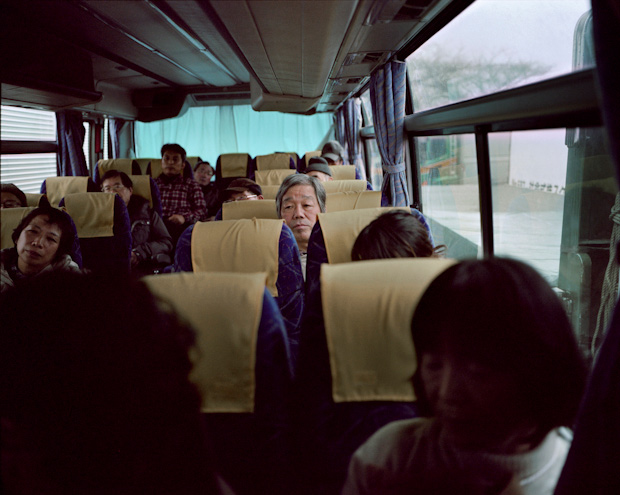 A group of evacuees, mostly farmers and small business owners are en-route to a huge rally in Tokyo from Fukushima. People continue to tell their stories as victims and push ahead for the truth against government official almost three years after the man made nuclear catastrophe. March 2014. 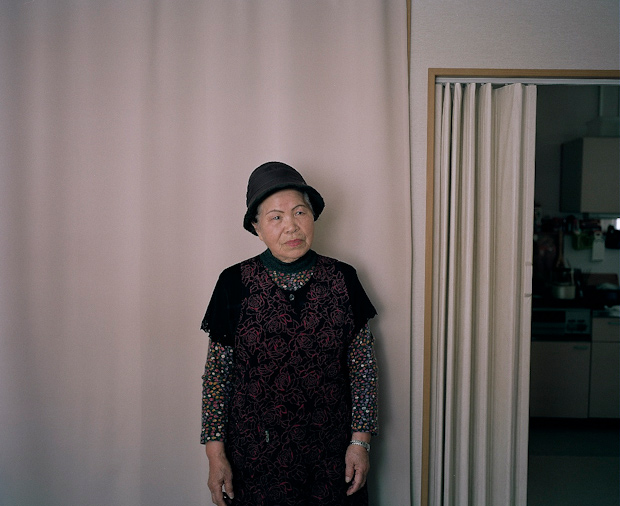 Shigeko Yokota, a vegetable and rice farmer from Tomioka, Fukushima, about 6 to 9 Kilometers from the Fukushima power plant. She did not evacuate for about a month after the meltdown. She has a son, daughter and grandson. Shigeko moved around to 3 different evacuee houses before settling at the Tomioka Houses outside of Koriyama City, Fukushima. February 2014. 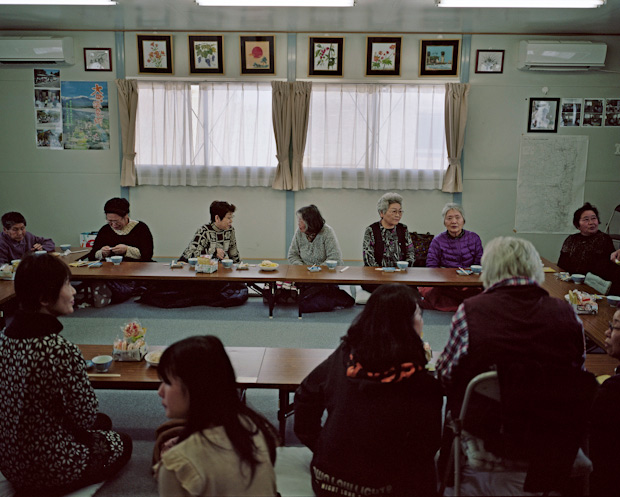 A group of evacuees from Tomioka town, mostly mothers, grandmothers and farmers sit for a lunch gathering and have friendly conversations usually on Saturdays at the Tomioka temporary houses. Outside of Koriyama City, Fukushima. February 2014. 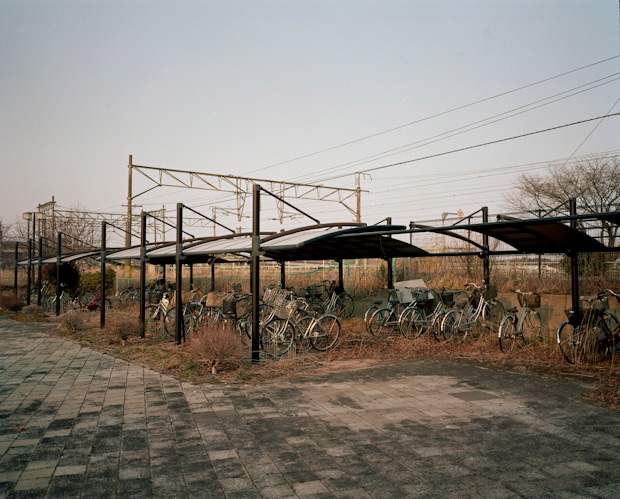 Abandoned bicycles remain as they were left on 3.11.11 at the train station in the town of Odahka, which lies about 6 miles from the Daiichi nuclear power plant. March 2014. 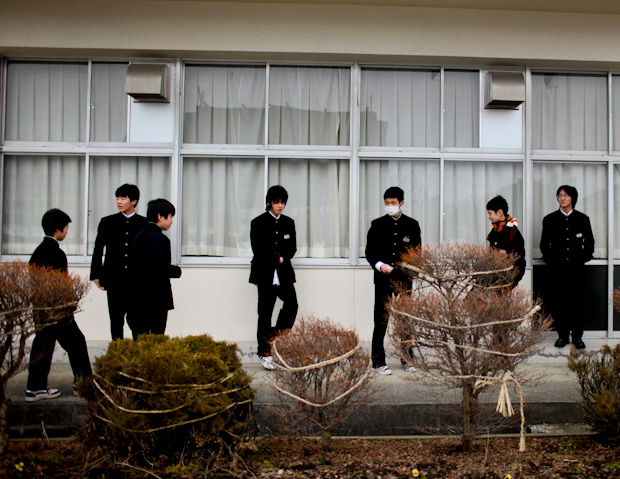 Students hang out in front of a Junior High School after graduation in the Onuma disctrict of Aizumisato, Fukushima Prefecture. There is a constant fear among young parents throughout Fukushima that the government is not providing truthful information about high levels of radiation in areas. Another concern for young families is discrimination against their child in the future. March 2014.