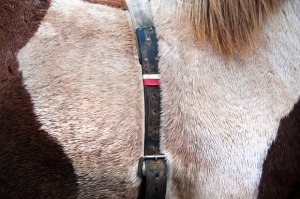 A strap used for tethering horses together is worn by an Icelandic horse at the Laufskálarétt round-up in Iceland on September 25, 2010. The strap is used to allow a rider to lead two or more horses while trekking.

Photo by: Lindsay Blatt/Herd In Iceland