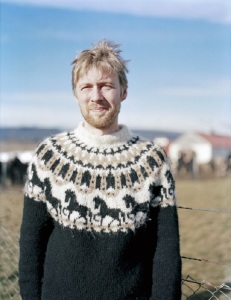 A local horseman wearing a traditional handknit wool sweater at the Víðidalstungurétt round up in Iceland on October 2nd 2010. Photographed with a 4×5 camera.
Photo by: Lindsay Blatt / Herd In Iceland