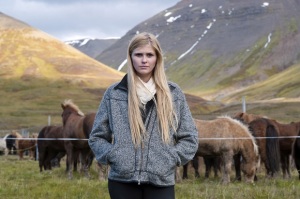 Kolbrun Yr Sturludottir helped to bring in the horses from Geitaskarð farm, on the way to the Skrapatungurétt round-up in northern Iceland on September 17, 2011.
Photo by: Lindsay Blatt / Herd In Iceland