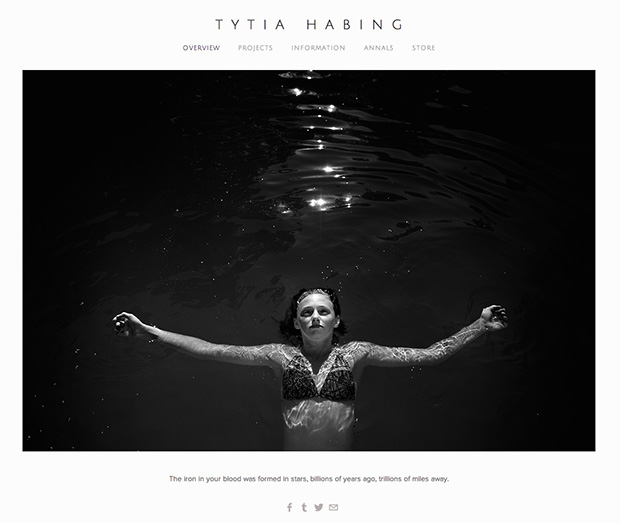 Tytia Habing has two different degrees, neither one of them photography. With an education in Horticulture and Landscape Architecture, Habing’s love of nature and the outdoors is present in every image, the world in constant bloom through her lush photographs. Growing up on a farm in the Cayman Islands, Habing now calls the Midwest her home. She documents the delights and surprises of motherhood in her series The Boy, capturing a life “filled with dirt, broken toys, shoes full of sand, mud, dinky cards and a never-ending sense of amazement at this foreign creature I brought into the world. This boy.” Published in The National Geographic and sites such as F-stoppers and Lensculture, her work has also been widely exhibited in the United States and abroad.

Habing’s portfolio is a vast mixture of rich black and whites with a punch of color thrown in for good measure. Habing used Squarespace to completely overhaul her site, using its simple drag and drop tools to create a streamlined place to present her work. Ever the perfectionist, Habing loves that she can make her website her own without complicated code or a team of expensive web developers. We asked about her process and what she likes best about her new site. 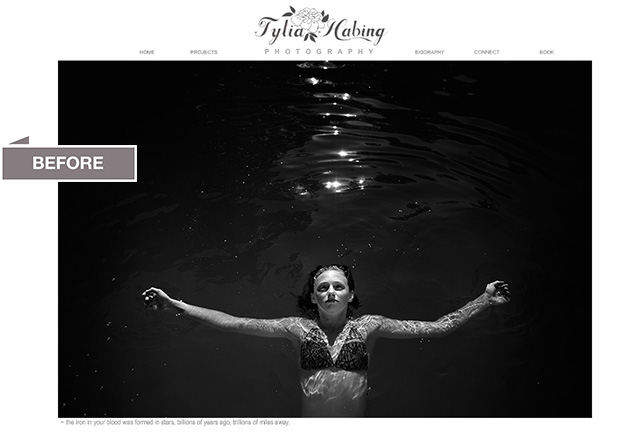 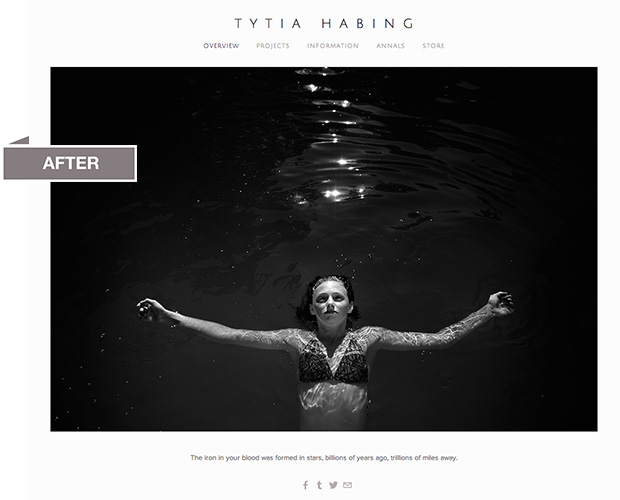 Why did you choose to keep the website looking almost identical to your old site? Was it easy to find the right template on Squarespace to make that possible?
“I didn’t intentionally start out to choose a template that looked so much like my old one, but after designing for awhile, I found I kept returning to the same layout. I loved the clean lines and easy functionality of it. While on the outside, the site looks very similar to my old site, the implementation was leaps and bounds easier. I had to design my old site pretty much from scratch and then design an entirely separate mobile site and try and make it match. My old site took me weeks to get it the way I wanted it and it had more glitches than I can count. Squarespace took me maybe two full days of work, which I broke up into about a week here and there. It was really easy, and has so many more pluses than my old site: commerce, great SEO, visitor stats, amazing customers support, a blog built in, drag and drop and so, so many more. I couldn’t be more pleased with how easily and quickly this site came together.” 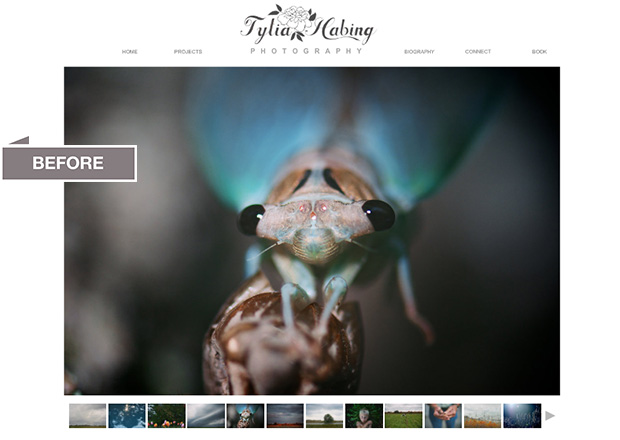 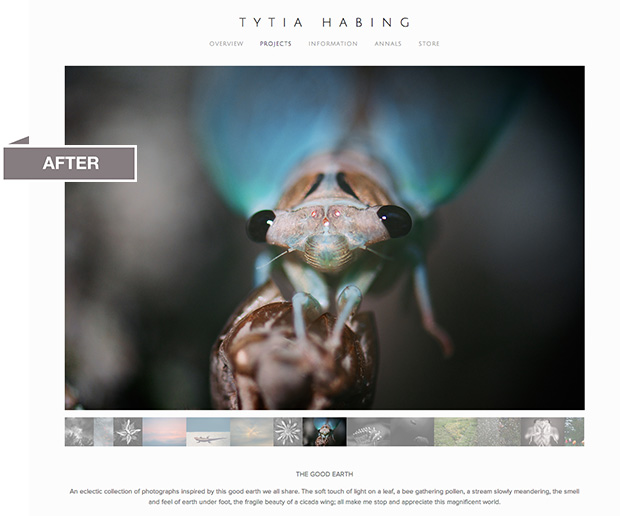 Which template did you use for your site? Did you customize anything?
“I chose Avenue, and did a little customization. I wanted large single images for my galleries with thumbnails instead of the smaller images down the page style, so I changed that. I also changed the blog page to full width with no sidebars. I did a couple other minor tweaks as well, but I mostly left the template as is. How great is that? Less work for me is always a good thing.”

What issues did you have with your old site?
“I had a lot of issues with my previous site. It was Flash based, so I really wanted to get away from that. It was a struggle to get good SEO. I also had to design my site and then design a whole separate mobile site. I don’t have time for that. Another big problem I had was it was too customizable. It almost sounds silly to say, but too many options can sometimes be a bad thing. At times, my previous site looked very amateurish because of that and I want a site that looks like a professional designed it, even though I’m the one doing the designing. You get that with Squarespace. It’s much easier to add and delete images from galleries too. Just drag and drop.” 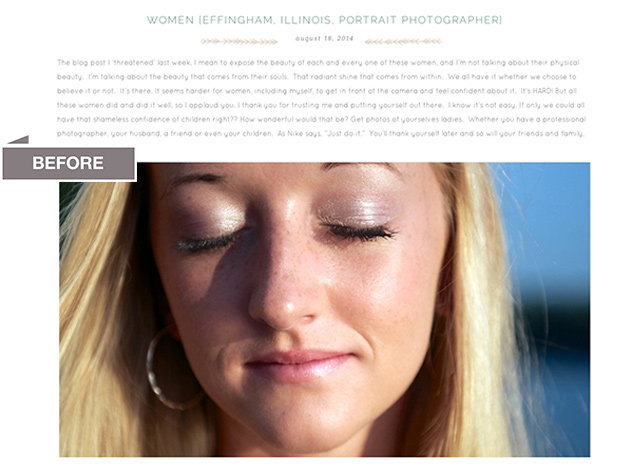 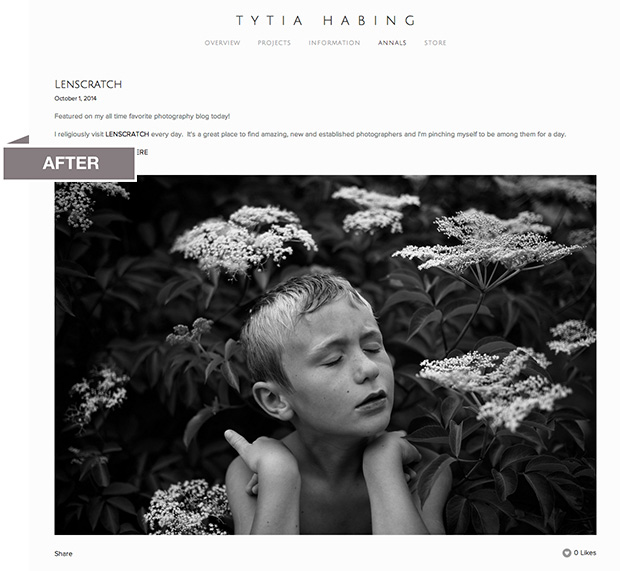 How did you want your new site to look / function?
“I wanted a very clean, minimalistic design that is easily navigated. I got just what I hoped for.”

How does the design of the new platform relate to your photographic aesthetic?
“Most of my images are anything but minimalistic and opposites attract, so I think this is the perfect platform for me. The minimalism puts the emphasis on the image, not the design of the site itself, which can be distracting.” 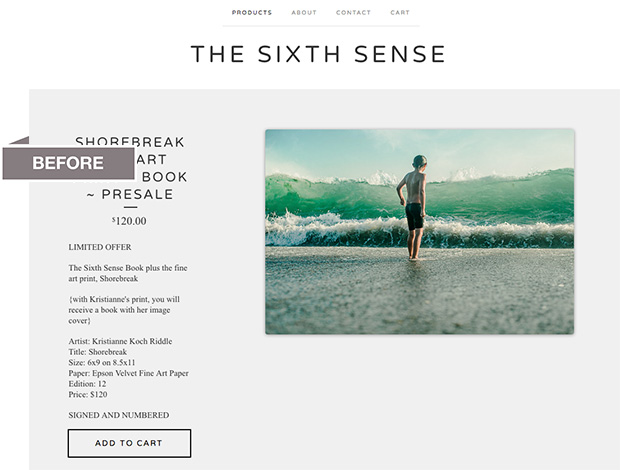 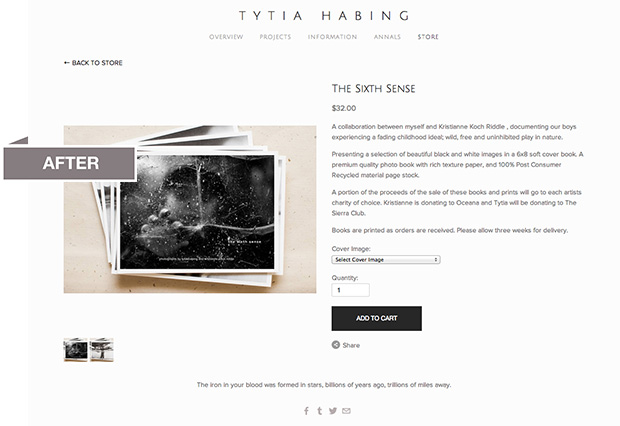 What are some of the advantages of using Squarespace?
“The ease of design is a big one. The amount of templates to choose from and the fact that I can change it at any time is another. I also love the clean, minimalist look that puts the images front and center, which is how it should be for a photography site. I also love the fact that I have a commerce site built right in. I’ve wanted that for a very long time to sell prints since I don’t have gallery representation yet.”

Why is it helpful to be able to control the look and function of your own site?
“The last thing I want to deal with is to have to contact and pay someone to make small adjustments to my site. Using Squarespace, it’s all in my hands, and since I’m a perfectionist it works out great! I have no doubt I’ll be tweaking things here and there in the future. It’s in my nature, and luckily this platform allows that.” 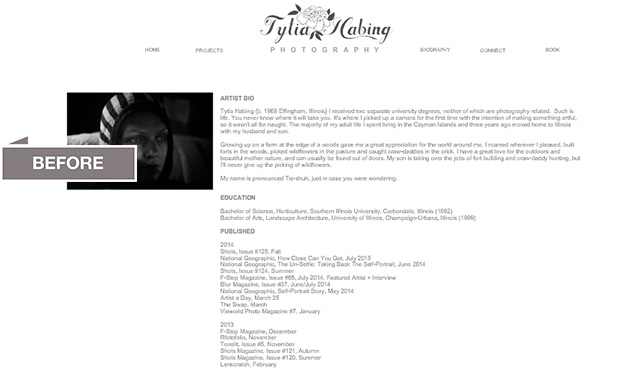 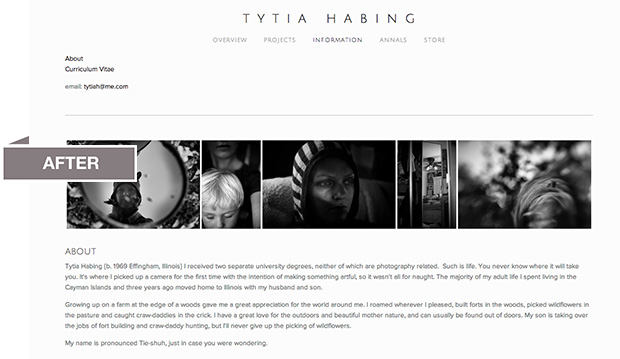 Squarespace  is a Feature Shoot sponsor.