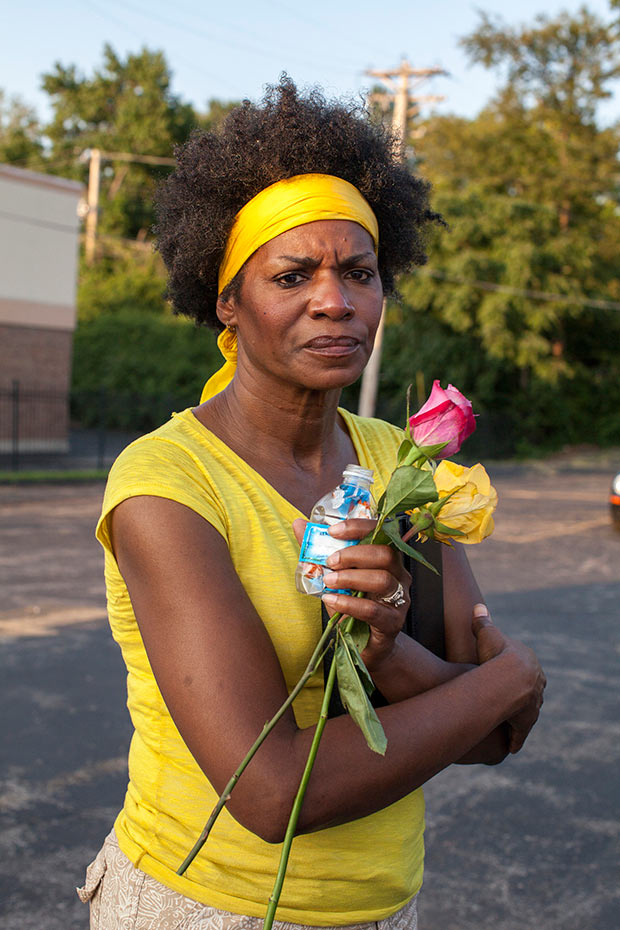 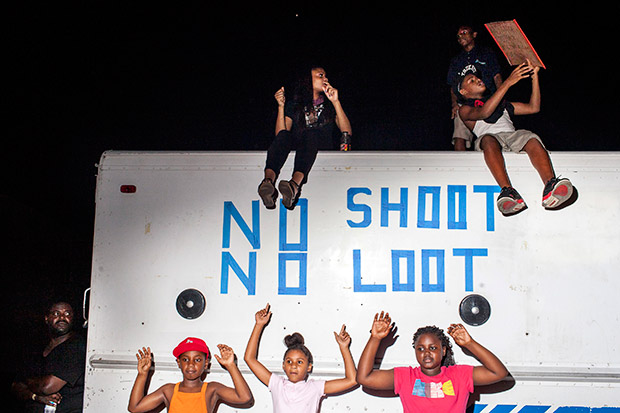 A group of children dance and play during a protest on West Florissant Avenue by a truck, blasting music, with on a sign on it which reads “No shoot, No Loot.” Moments later the police came and made them get down from the top of the truck and turn off the music. 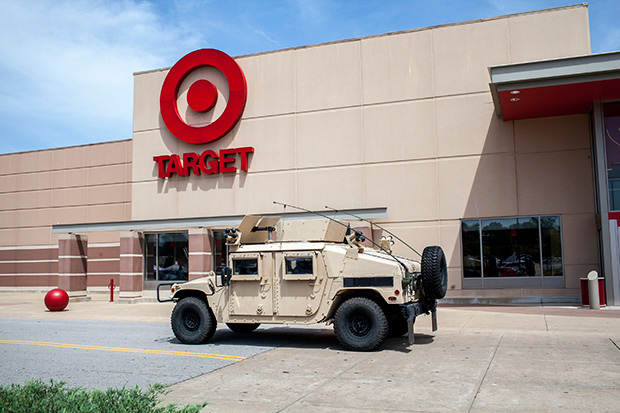 A National Guard hummer drives past a Target in Ferguson, next to a base the guard has set up in the shopping center parking lot.

On August 9th, 2014, the community of Ferguson, Missouri was shaken and irate by the fatal shooting of Michael Brown. Unarmed and only 18 years old, the teenager was shot by St. Louis Police Officer Darren Wilson in broad daylight. The people of Ferguson took to the streets in protest and met with tear gas and rubber bullets from local law enforcement. Curfews, tactical military vehicles, machine guns and an overwhelming sense of unraveling authority were rampant through the suburb’s generally quiet streets. The aftermath swelled for days afterward, leaving a town and a country haunted by age-old questions of racism in America. With media and reporters flooding Ferguson’s neighborhoods, photographer Natalie Keyssar was witness to the events that took place while on assignment for The Wall Street Journal. She spoke with us about her on-the-ground experience, the people that she met and the stories that stayed with her long after she left. 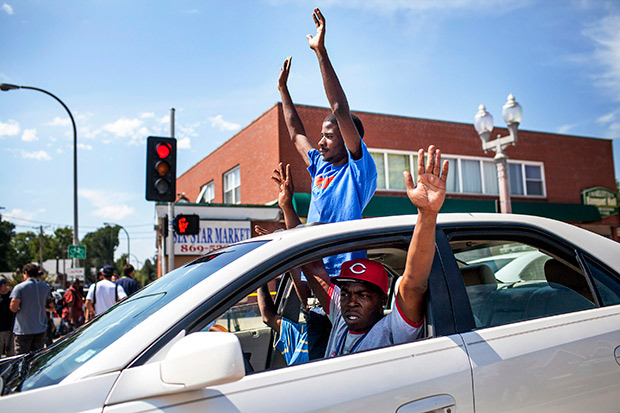 After police shot and killed a second unarmed man 2 weeks after the shooting death of Michael Brown, about 10 minutes away from Ferguson, young men driving by the new crime scene held their hands up in protest as a crowd gathered.

You were on an assignment for The Wall Street Journal to cover the events in Ferguson, Missouri. At what point did you arrive? How long were you there?
“I arrived in Ferguson around 5 AM on Tuesday the 19th. It was 10 days after Michael Brown was killed. I was there for the rest of that week, and had to leave the following Friday the 23rd. When I arrived the height of the clashes had just crested I think. Both law enforcement and protesters, while by no means restrained, were beginning to show some restraint. I think both sides were trying to figure out a way to avoid further violence and arrests to a certain extent.”

Describe the general emotions and atmosphere. Was it what you were expecting?
“I think what struck me about Ferguson above everything else was nature of the protesters themselves. I’ve covered a lot of protests, and generally there’s a sense of people doing a job among a lot of activists. There are planned chants. There are sort of professional political organizers leading the marches. You’ll see demonstrators giggling and chatting amongst each other and then when they see your camera they’ll put on their angry faces and shout slogans. I don’t mean to knock any activists; that’s just the reality of the theatrical aspect of a lot of political protests. There’s a sense of everyone – the police, the press and the protesters – playing a role.

“Ferguson had elements of this of course, and as the media presence increased over the time I was there, things took on a much more theatrical quality, but the protesters seemed very different to me in general. They weren’t making abstract, academic points about racial inequality or police brutality. They were desperate, and they were outraged, and it was very real and very emotional. They marched down Florissant Avenue shouting ‘Hand’s up, don’t shoot!’ over and over and over. Not all the time, but sometimes, there was a gut-wrenching tone in their voices, like they were really begging for their lives. You could see the resolution in their eyes, that they had had enough. The world was watching and listening to this previously voiceless population. ” 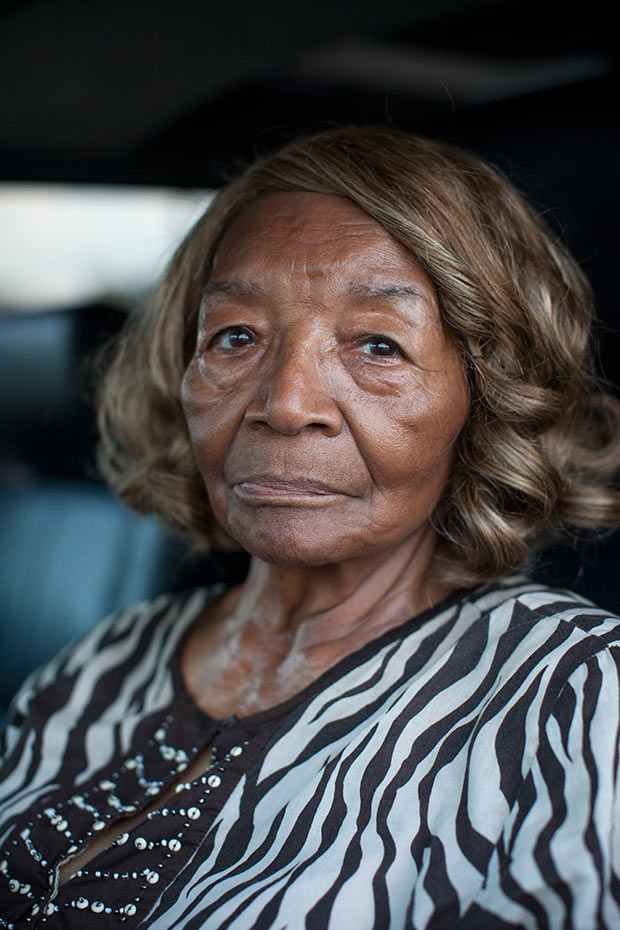 Clara Thornton, 87, of North St Louis. “I love peace and harmony and joy.” she said, ” And I’m praying for both sides; black and white, we’re all children of god.” 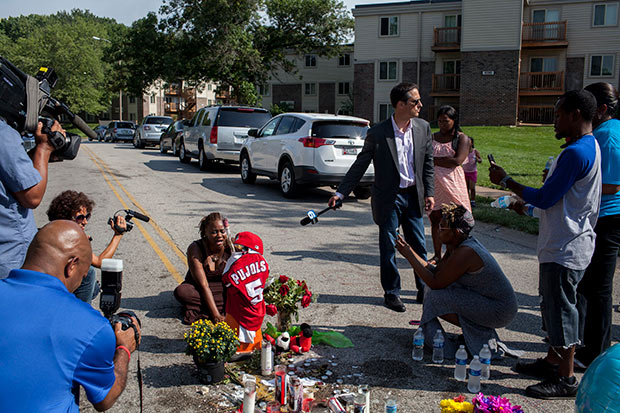 At the memorial in the spot on Canfield Road where Michael Brown was killed, a woman sings a song for the departed as media crowd around to record her.

You spoke with a lot of the people out on the streets. Was there any one interaction that sticks out in your mind?
“There were two conversations that really stuck with me. The first was with Donte Carter, who was one of the very first protesters I met upon arrival. He was at every protest I attended, and the frustration and determination was all over his face. He has ‘Heaven’ on his chest and ‘Hell’ tattooed on his stomach and he said the tattoo on his cheek was a symbol for freedom. When I asked him why he was protesting he said ‘One day, if I can’t get the money together to move somewhere else, my children will be raised in this community, and I never want them to be subjected to the kind of police brutality we are now.’

“I was also utterly charmed by the warmth and strength of Mrs. Clara Thornton who I photographed sitting in her car on Florissant Ave. She said, ‘I love peace and harmony and joy. And I’m praying for both sides; black and white, we’re all children of God.'” 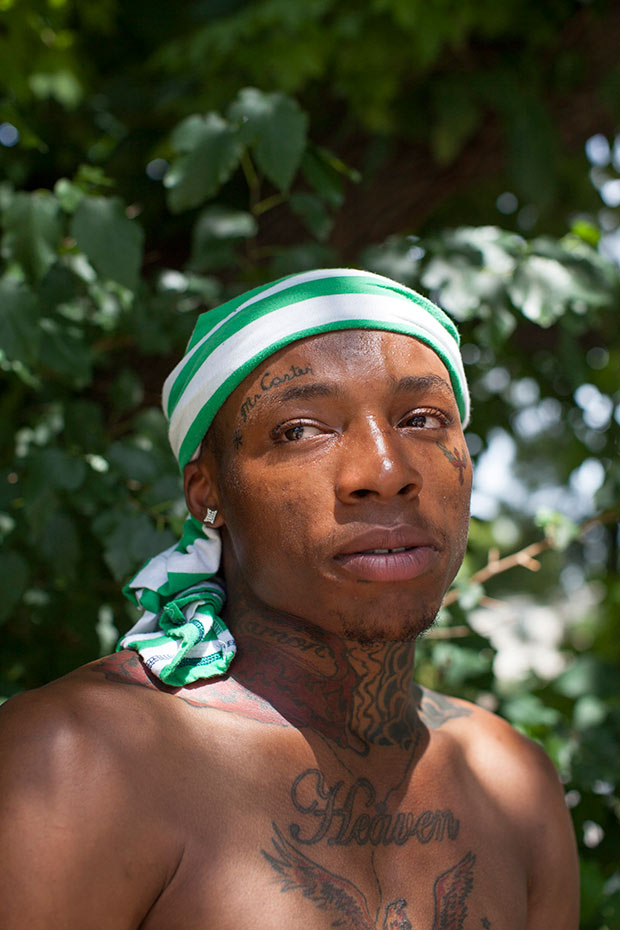 There were many stories about police aggression towards the media and photographers. Did you witness any of this first hand?
“I did witness some of these events. I think it’s important to not make the story in Ferguson about the treatment of the media by police, on the other hand it is important to note that there were some incidents that absolutely crossed the line of preventing the press from working freely. One police officer pointed a machine gun threateningly at myself and a group of other photographers during a protest, and verbally threatened a colleague of mine. We were threatened with mace repeatedly and blocked from photographing arrests, while clearly displaying our credentials.”

The events in Ferguson were all over the news and so much was said. Being in the midst of it all, is there something you felt was missed in all the reporting?
“I think a lot of great work has been done covering Ferguson, and I think the way this incident has been covered is showing a trend towards the media taking these types of police involved shootings more seriously. I did feel at a point that coverage of looting by the protesters, or poor treatment of the media by police, was overshadowing the real story, which is the violent death of a very young man and the community response to it, but as the situation in Ferguson has continued to unfold I believe the coverage has really refocused on the issues at hand.”

What did you take away from this experience?
“I think that when we look back on Ferguson it will be seen as a moment in U.S. history when the tides of public opinion finally began to change about the deaths of young black men (and women) at the hands of police in America. These incidents have been tragically common for my whole life, and Ferguson, as a community, seems to collectively be saying ‘we’ve had enough’, and for once, the whole world is watching.” 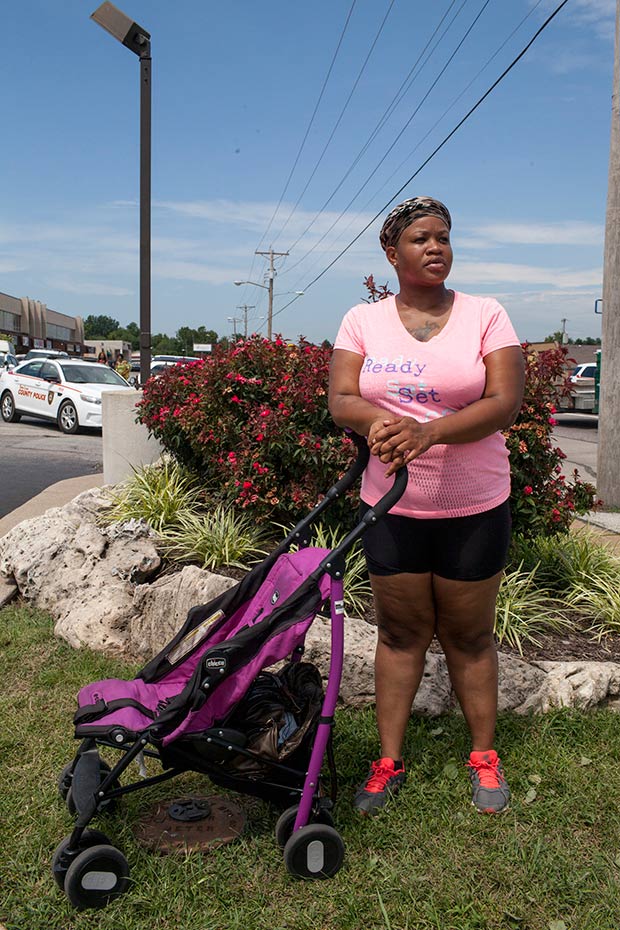 A young woman stood on West Florissant Ave with a stroller on Tuesday afternoon. 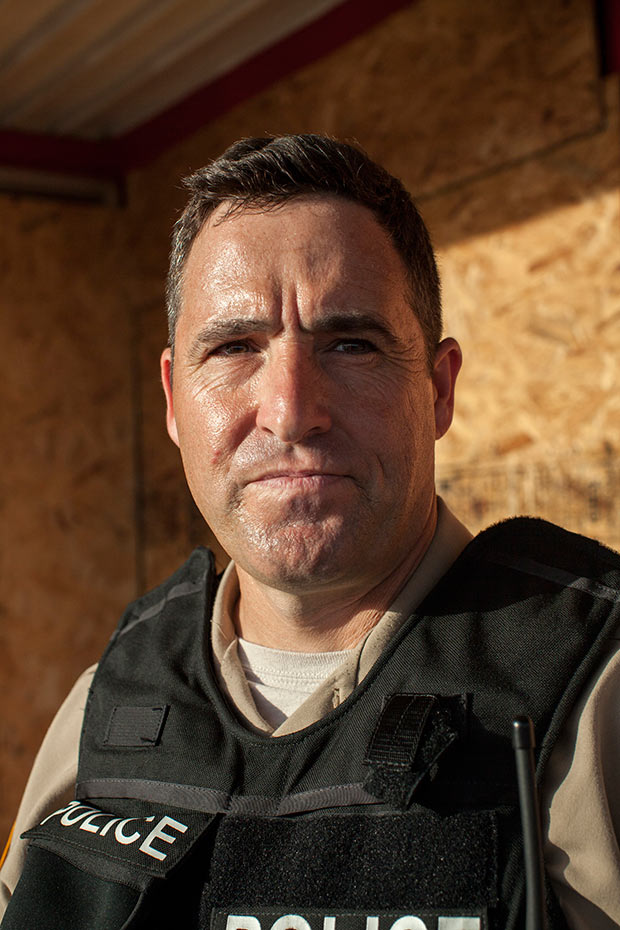 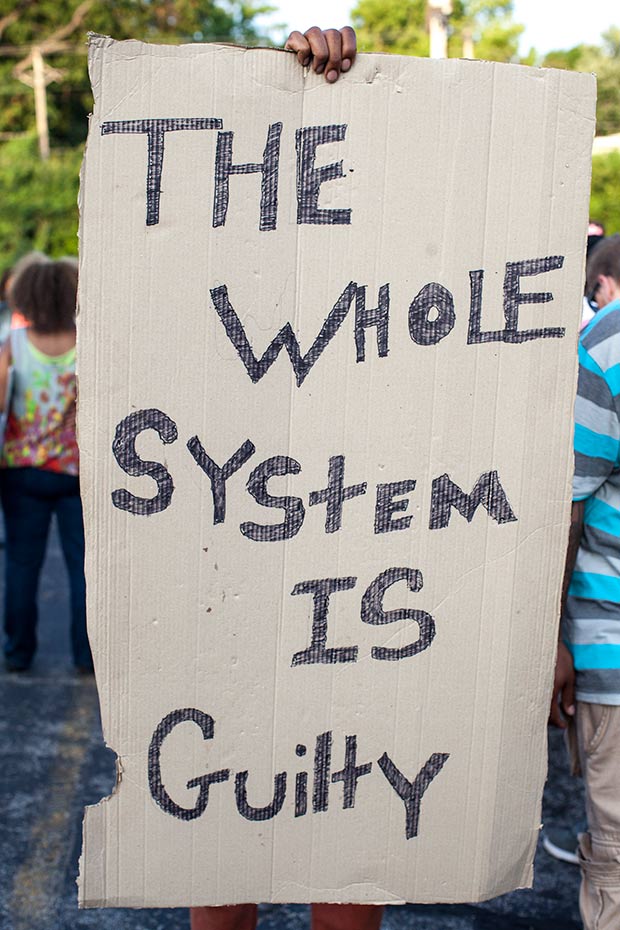 After a protester holding this sign was arrested, others pick it up and carry it. 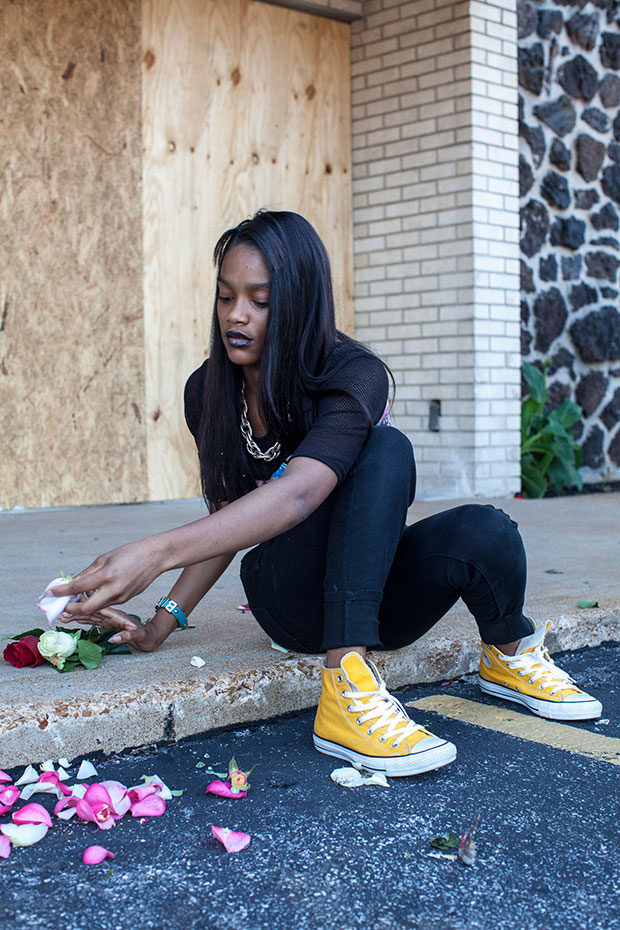 Grace Williams, 15, of Ferguson. “I think its sad that schools are closed. Kids need their education and instead they got nothing to do. Sometimes i come down here to protest, and see if any celebrities are around. 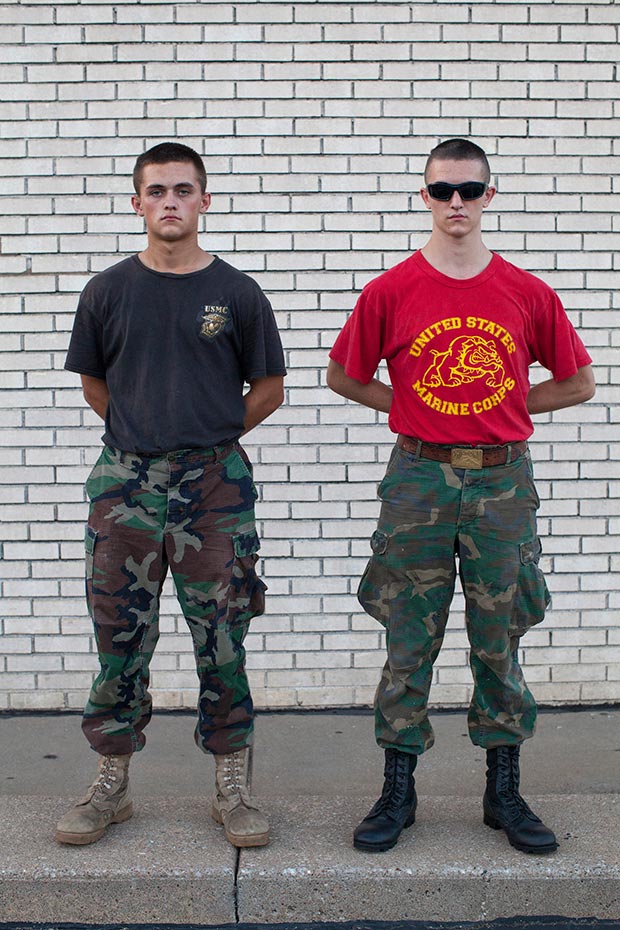 Left: Robert Popp 17. Right: Carl Popp Jr. 18, poses for a portrait on Thursday afternoon on West Florissant. He came to see the protests for himself. 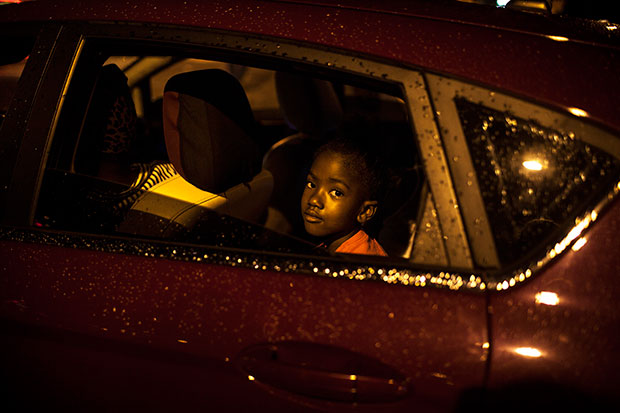 As the protests pass by on a rainy evening, a young girl watches from the backseat of a parked car. 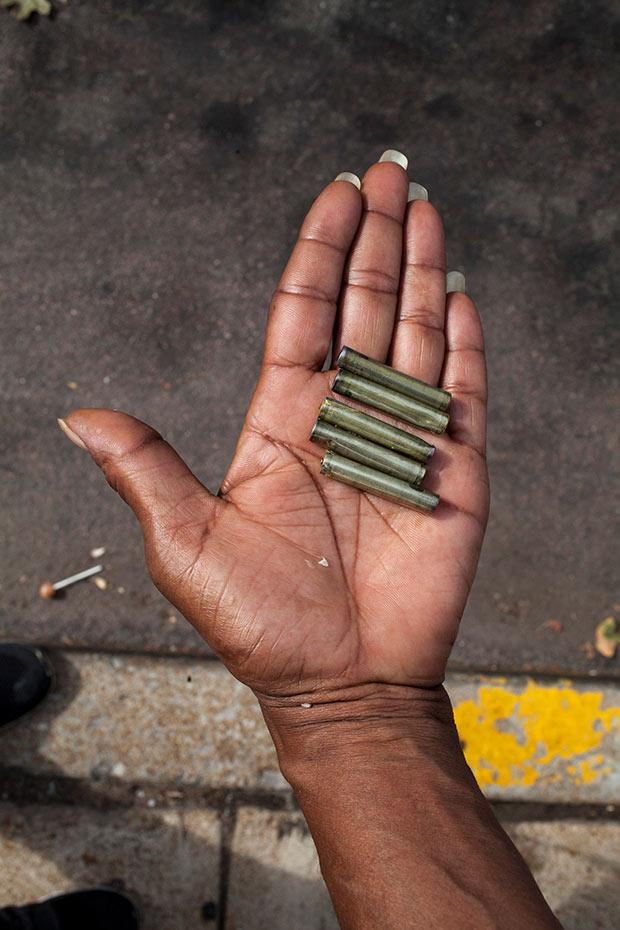 A protester holds out munitions casings she said she found on West Florissant Ave. 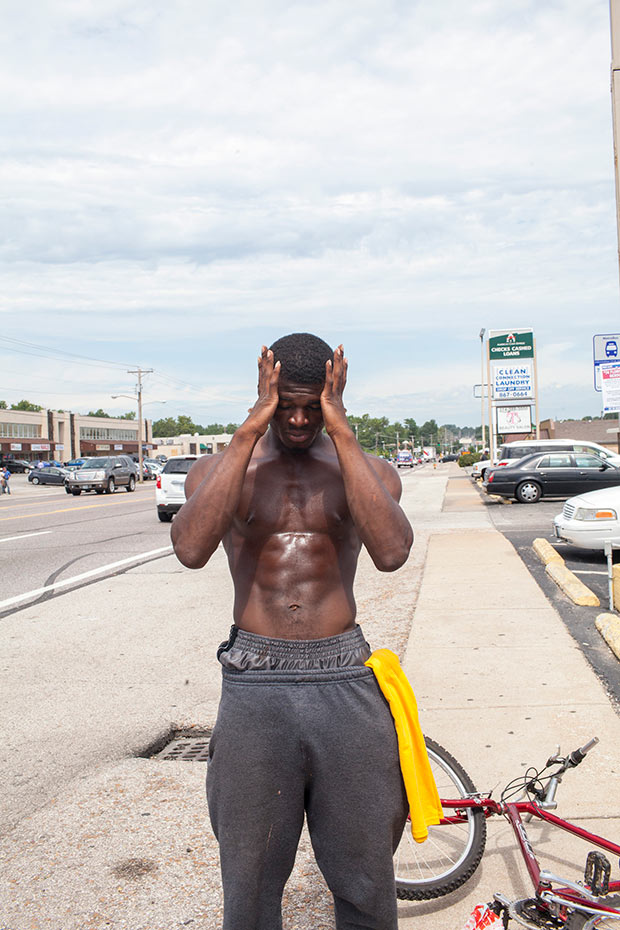 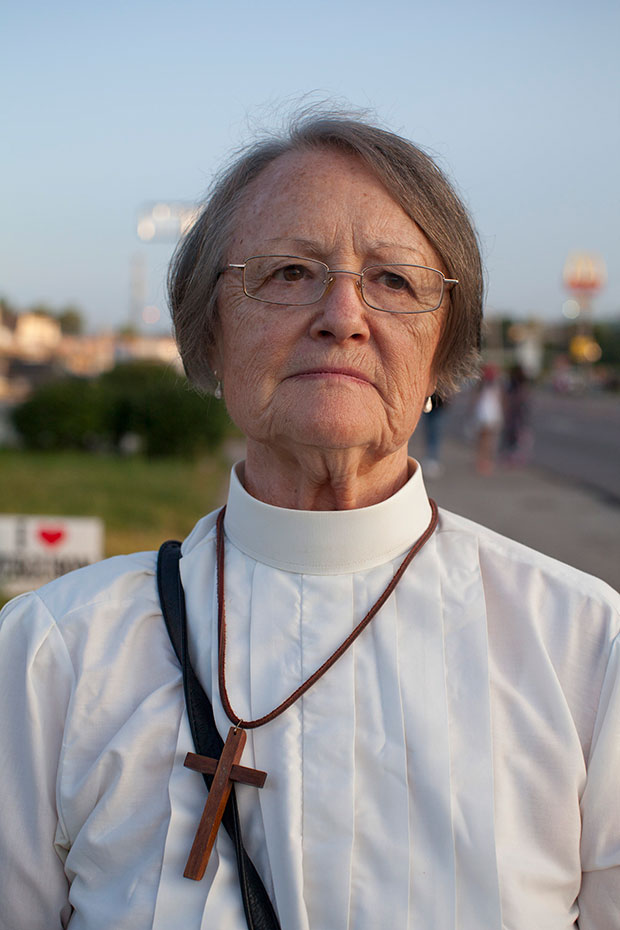 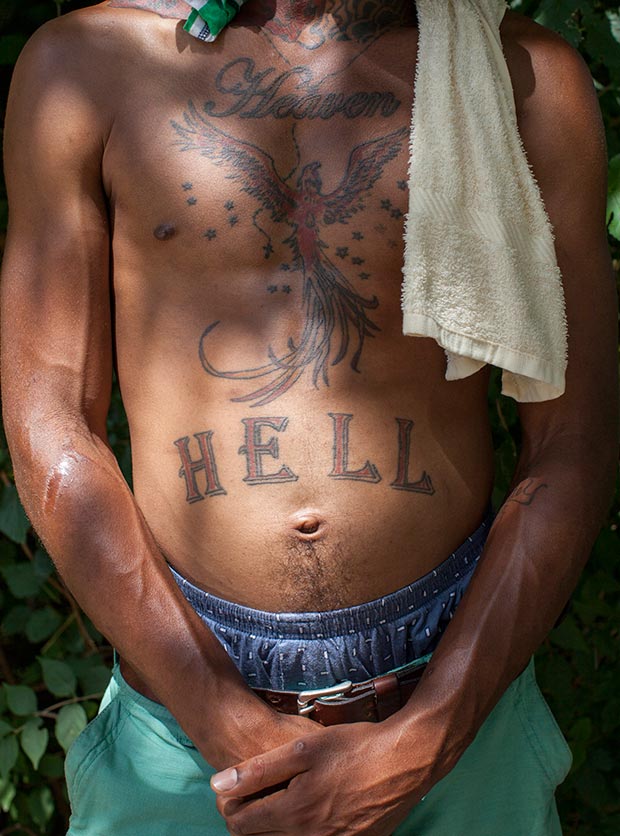 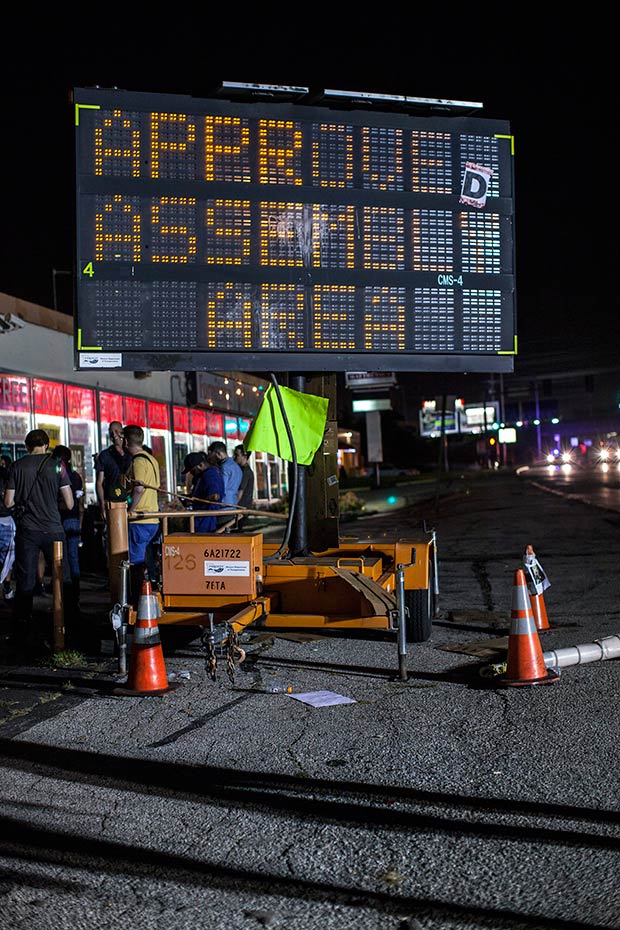