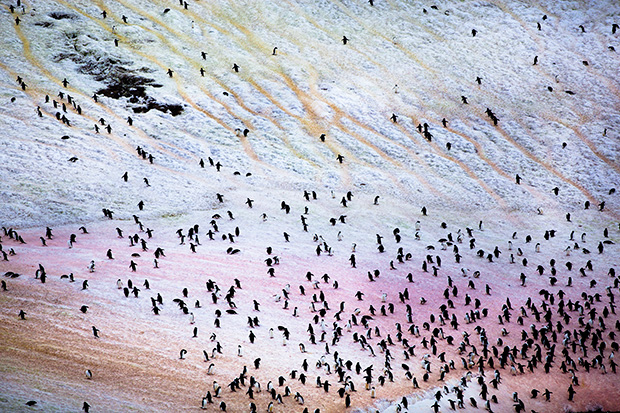 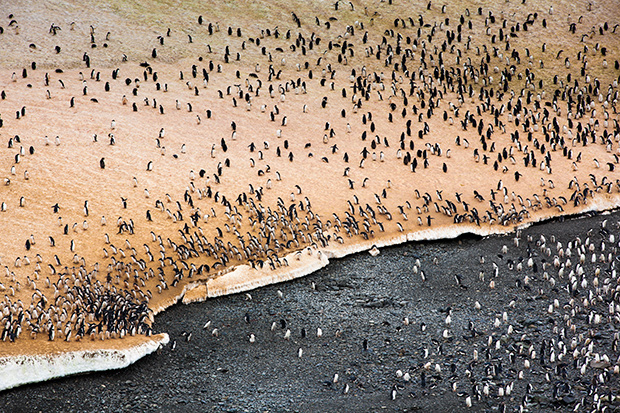 For his breathtaking series Penguinscapes, photographer Gaston Lacombe traces a colony of 250,000 penguins along the Esperanza research base in the Antarctic Peninsula’s Hope Bay. In summer, the penguins come ashore to hatch and care for their nestlings, often venturing onto the base itself. In his arresting aerial landscapes, Lacombe offers us a glimpse into the shockingly verdant terrain of Antarctica, an extraterrestrial wilderness whose appearance metamorphoses daily depending upon the activities of its native penguins. As this ethereal watercolor expanse becomes saturated with soft pinks and greens, we are reminded of the profound delicacy of these creatures who depend upon the landscape for generations to come. We spoke to Lacombe about his visit to the Esperanza base, his passion for wildlife, and the future of the penguins.

What inspired you to visit Antarctica and photograph these penguins?
“I was invited to Antarctica through an artist-in-residence program run by the Department of Antarctic Affairs of the Government of Argentina.  I had the unique opportunity to reside on the Esperanza base for nearly 2 months.  Esperanza is located on the Antarctic mainland, on the Antarctic peninsula.  When I submitted my application to the Government of Argentina my main proposal was to create a film on the human dimension of Antarctica, which I did, but I also ended up taking over 20,000 stills, mostly of the 250,000 penguins living on the base.  The majority were Adelie penguins, with a few thousand Gentoo penguins thrown in.”

Could you tell us a bit more about the Adelie and Gentoo penguins?
“Behind the Esperanza base, there is a large Adelie penguin colony of about 250,000 birds.  Right on the base, there is a colony of Gentoo penguins, of 2,000-3,000 individuals.  This makes for a very noisy environment, and a smelly one too.  The penguins constantly shuttle to and from the penguin colonies, crossing the base, and hopping over human-made obstacles all day long.  The penguins come to land from about November to February (summer), to hatch their eggs and raise their young.  The rest of the year (winter), they live at sea, at the edge of the icepack.” 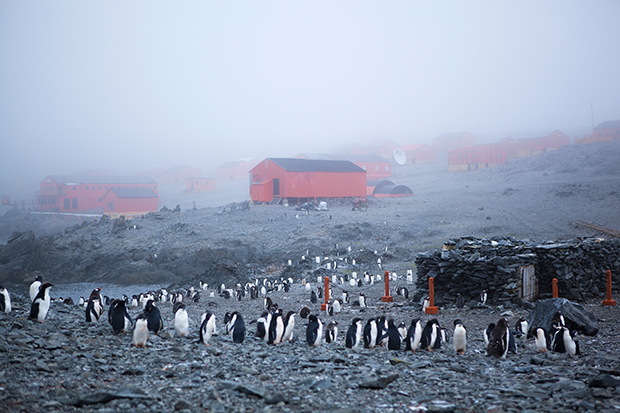 Could you tell us a bit more about the Esperanza Base and your visit there? How do the people and the penguins interact?
“The Esperanza base is very unique since it is the only one where families live. The Argentine soldiers stationed at the base (for one year at a time) are allowed to bring their spouses and children. So there is a school on the base, private homes, a clinic, a gym, etc. The spouses and kids were not there when I was visiting, since it was summer vacation, and that is why they had space for artists-in-residence there.

“The people there are not allowed to interact with the penguins, unless they are the biologists monitoring the colony. It is very important to not interfere in any way, so that the penguins do not feel threatened or stressed in this important nesting area. If penguins and humans meet, penguins always have the priority. The nesting colonies are chained off, and only people with special permissions are allowed to enter. The penguins, however, don’t always stay in the chained off area, and go wherever they want, and we have to respect that. I did most of my photography from outside of the chained off area, but I did get special permission to enter the colony a few times as well.”

Why did you choose to frame the penguins from above, in the context of this vast landscape?
“The answer to this questions lies in the search for a new way of seeing an old thing.  We all know what penguins look like; we’ve all seen the photos.  So when I was first taking photos of the penguins, I was not impressed with myself, since I was not seeing anything original.  Then I found a tall cliff behind the base where I had a great view from above of part of the Adelie penguin colony, the part where the majority of them ferry to and from the ocean.  Right away I could see that this was a more original view on penguins.  I was not taking photos of individuals, but looking at them as a mass.  I was also looking at how this mass interacted with and changed the landscape, through its movements, patterns, and the colors that the penguins drag around with them on the white surface of the snow.” 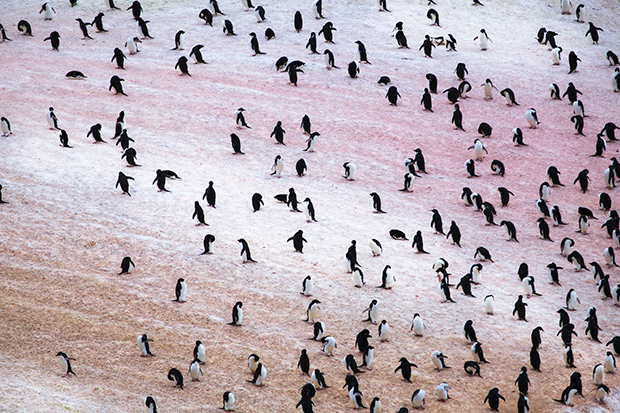 These photos are bursting with color. How does the terrain get its painted appearance?
“There are three main ‘colorants.’  Algae, dirt and… poo. Microscopic algae lives in the snow and ice all around the Esperanza base.  When the sun comes out in the summer and the top surface of the glaciers melts, these algae bloom in wide patches and long plumes of red and green.  It was a shock at first to see full glaciers turn a dark blood red.  I did my research and found out it was Chlamydomonas nivalis, also known as watermelon snow.  It would only come out for a few hours at a time, and then disappear in the snow again.  It was the same with algae that was in the green or yellow color range.

“Dirt of course gets blown up in the summer when patches of ground around Esperanza thaw.  Sometimes there are little dust storms that eventually turn the snow brown. The penguins drag a lot of dirt around with their feet [as well].  When they come out of the ocean and walk across the beach, they get their feet muddy, and trail some brown over the white snow.

“And penguins are responsible for the poo as well, which is pink.  Penguins eat krill, which is pink, so their poo is pink too.  The whole penguin colony is covered in pink sludge, and the penguins trace trails of pink on the snow when they leave the colony to go to the ocean. Then there are also the many different shades of blue, green and turquoise which already exists in the ice of the glaciers and icebergs.  So, Antarctica in summer is not a white place, at least around the Esperanza base. It is indeed a riot of colors.”

How does being a conservationist influence your photography?
I guess the main thing is that I don’t take photos just to get a pretty picture in a frame.  I want to tell meaningful stories with my photos, and I want them to have an impact.  I also want my photos to serve as educational and scientific tools.  For me, it’s not enough to have a great photos; it has to have a reason to exist.  In the context of the Antarctica photos, they have been used to educate and to trigger discussion on multiple platforms, exhibits, lectures, articles, and a book.  In 2013 I launched a lecture tour in Canada (where I am originally from), where I visited school children in 16 cities and villages.  I did 23 lectures to people of all ages to talk about penguins, the Antarctic, climate change, and the challenges facing the area.  So I am always looking for a way to put the photos to work and have meaningful impact. 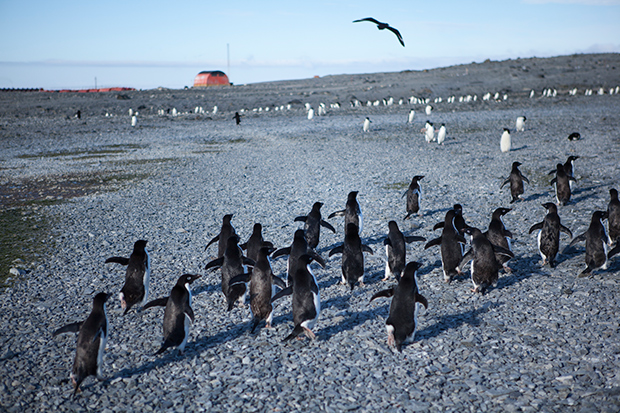 Is global warming affecting the penguins’ habitats? What can we do to help?
“The Adelie penguin colony at Esperanza is, generally speaking, in good health, but Adelie penguins in general are suffering greatly from climate change.  The population of Adelies has dropped by over 65% over the last couple of decades.  Adelies rely on dry rocky sites to nest and reproduce.  There aren’t many areas of Antarctica that thaw in the summer, so over the millennia, the Adelies have adapted to nesting on a few specific spots.  However, with climate change, there are two major problems for the Adelies.  First, climate change brings more precipitations to a continent which is essentially a desert.  But, more precipitations means that the Adelies’ eggs can get wet, either from the precipitation, or when the ground gets muddy from the melt.  Wetness and humidity is fatal to the Adelies eggs.  [Also], there are more warm days in Antarctica in the summer, which is another factor that affects the eggs.  If it gets too hot, the eggs can spoil.  So some Adelie colonies in Antarctica have completely collapsed in the last few decades.  Where there were hundreds of thousands nesting, not there are none at all. At Esperanza, there are scientists keeping a very close eye on the colony, in the hopes of keeping it thriving and healthy.

“It’s hard to think of something we can concretely do to help the penguins.  These global trends are so much larger than we are, but we all must do our best to better our planet.  First, learn more about climate change, and its affects globally, and put pressure on the US government to get their heads out of the sand and actually do something to help the planet.  The time for discussing climate change is over, it is now time for real action.  Second, do more yourself to prevent climate change, by looking into your regular habits, and seeing what you can change.  Third, look very carefully at what you eat and where it comes from.  Penguins are deeply affected by the extreme over-fishing of the oceans.  In general, our oceans are suffering greatly and fish populations are at a disastrous low.  I have stopped purchasing and consuming anything that comes from the oceans, and I wish more people did the same.  And lastly, please show your kids “Happy Feet” and “Happy Feet 2.”  If children learn to care about the penguins, then there are more chances they will do something to help them in the future.”