By Alyssa Coppelman on September 9, 2014 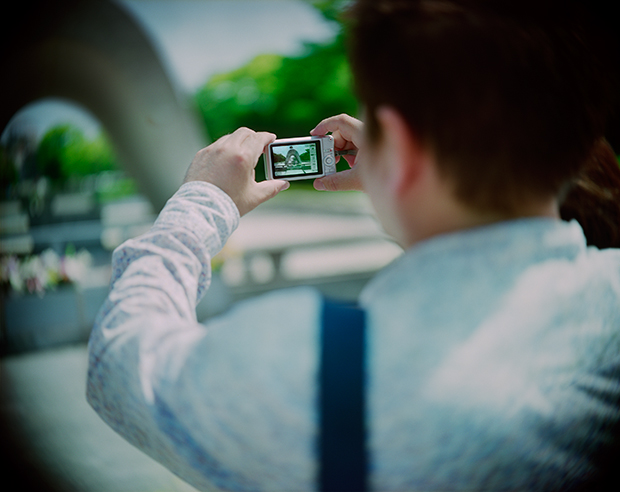 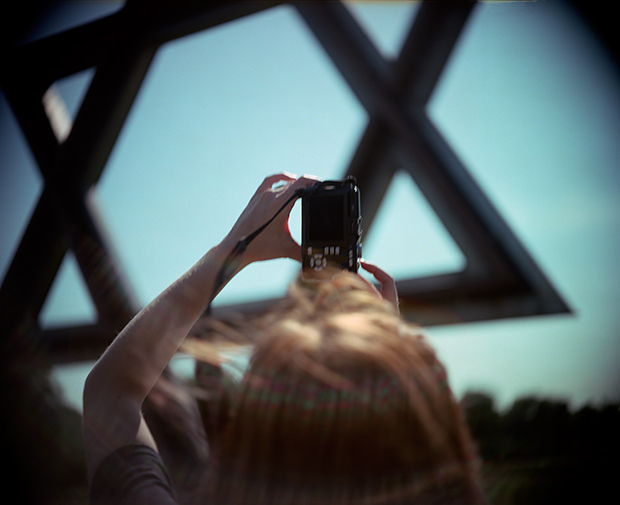 Tourists snap photos of all sorts, regardless of the surroundings. New York-based photographer Ben Altman‘s project Site/Sight brings attention to tourists taking pictures at sites of past atrocities, genocide, and war: for example: concentration camps, the Hiroshima atomic bomb memorial, Cambodia’s Killing Fields, and the World Trade Center site. In examination of this common human practice of taking tourist photos as a sort of proof you were actually in a place, that this extends to sites of the worst examples of human misbehavior is at least somewhat odd. Despite any question one might have about the impulse to take these pictures, Altman says practically everyone at the twenty-four sites he visited over a two-year span does it—and, interestingly, that his subjects almost never notice him taking a picture of them in the act of photographing. Altman answered some questions about his project.

It seems like a lot of your work focuses on the dark side of human nature—atrocity, genocide, mass murder. What is it about this topic that attracts you?
“I’m fascinated by how the darker events of modern history shape the world we live in. For example: underlying the current situation in Ukraine is the genocidal famine imposed on Ukrainians by the Soviet leadership in the 1930s; the Holocaust self-evidently constructs Israeli attitudes and policies; and Hiroshima stamped the image of nuclear destruction into world consciousness and power relations.”

“In our comfortable everyday lives these events seem distant. I focus on that disconnect, and in some ways, I embody it: I was born in England, with a Jewish father and an Anglican mother; in traditional terms I don’t even qualify as Jewish. Only some distant relatives of my father died in the Holocaust. But when we made a family trip to my Grandfather’s small-town birthplace in Belarus—a country from which Jewish life has been erased both physically and in memory—we were shown a large mound in the nearby forest, the 1942 mass grave of several thousand Jews. I’ve made my life in the United States, far from all of that. But, this country is built on slavery and the genocide of Native Americans. These kinds of histories, though often hidden or ignored, stubbornly endure and obtrude like that mound in the forest. That seems like something for an artist to dig into.” 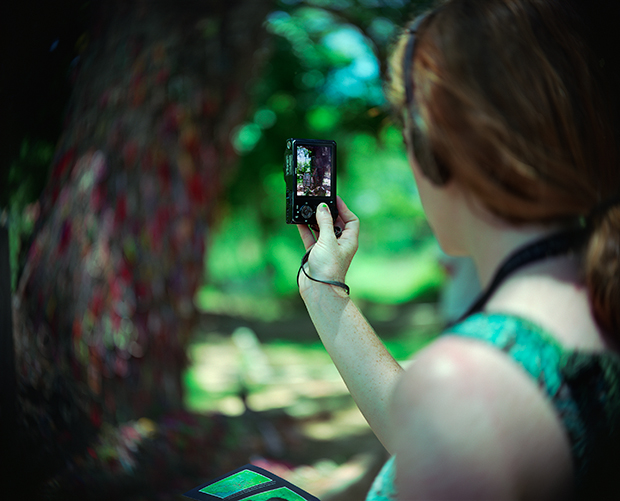 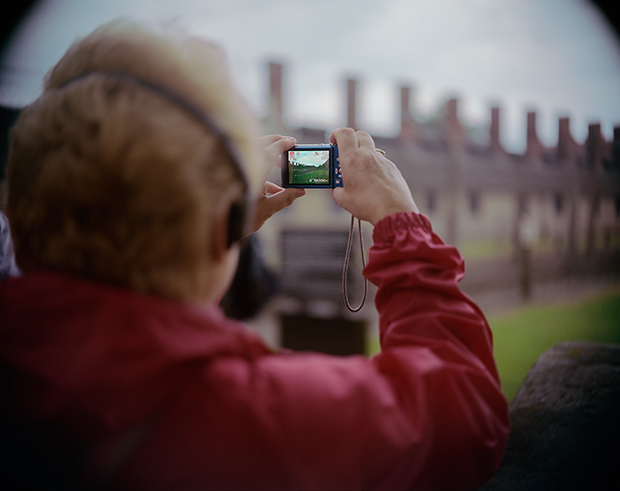 How did you come to focus on this ubiquitous presence of tourists snapping pictures at these sites of infamy?
“I grew up in a seaside holiday town in England, so I’ve always been a bit uncomfortable as a tourist. I get to travel accompanying my wife to conferences, so as a bit of a joke I began to make photographs of visitors photographing iconic tourist spots like the Eiffel Tower or the Brandenburg Gate. I became quite engaged with the project, even though I didn’t have a clear idea why. I used film as a kind of retro statement, in either Holgas or vintage medium-format folding cameras, but I wasn’t really satisfied with what I was getting.”

“Meanwhile, at home, I had been working on projects exploring the tension and disconnect I mentioned, between everyday comforts and histories of torture and genocide. When we planned a seven-month sabbatical trip for 2013, I realized I could apply my tourist idea to genocide sites. This would be an away-from-home counterpoint to the work I was already doing—but still with that tension between privilege and atrocity. I decided I needed a camera with better focus capability and higher quality, but I still wanted something like the Holga ‘look.’ That led me to a vintage press camera, the 4×5 Crown Graphic, using an undersized lens and the rangefinder for focus.” 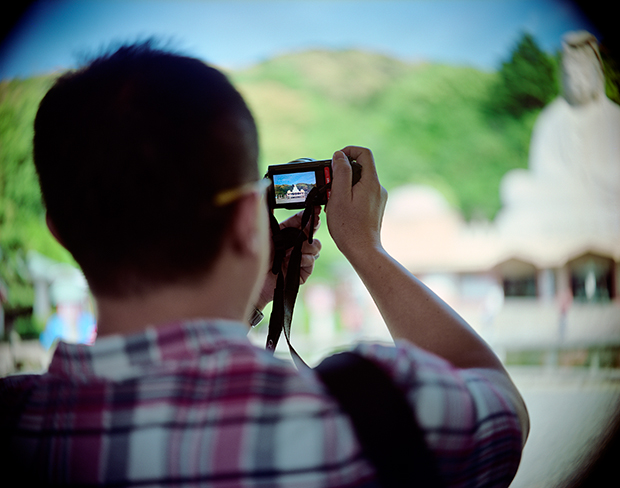 Ryozen Kannon Memorial to the Dead of the Pacific War. Kyoto, Japan 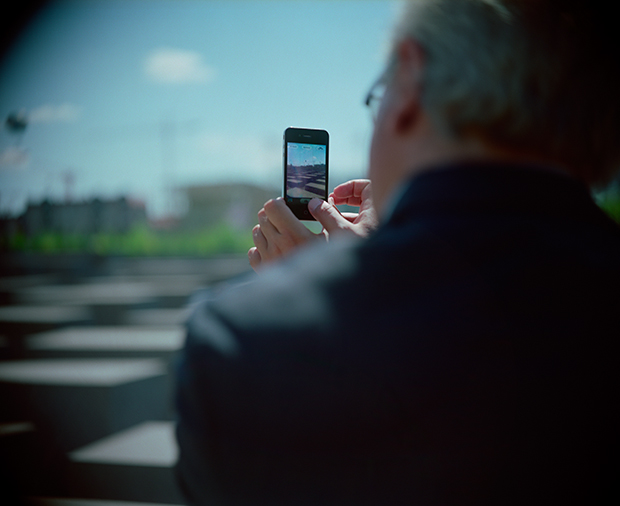 Memorial to the Murdered Jews of Europe. Berlin, Federal Republic of Germany

You visited 21 sites in a year (or what period of time?). What was the experience like of visiting so many of these places in such a short period of time?
“I visited 20 foreign sites in six months, the World Trade Center site later in the year, and a couple more US memorials this year. Although the foreign portion sounds like an intense schedule, it was embedded in more expansive and engaging travels that provided relief and also allowed me to see something of the present context of the sites. One of the impressions I came away with is how much many societies have recovered and moved on, at least domestically and on the surface. In Cambodia, where almost anyone you meet lost a part of their family to the Khmer Rouge, people seem good-natured and forward-looking. In thriving Japan, it’s difficult to realize that almost every city of any size was largely destroyed by US bombing, not just Hiroshima and Nagasaki. Bosnia-Herzegovina is different; the tensions there are basically unresolved, more recent, and are holding back development.”

“The sites themselves are a study in differences, from elaborate museums to clunky memorials to arty installations, with varying impact and effectiveness. They are complex places, attempting topreserve memory, to educate and exhort, to keep records, to provide burial, mourning, and closure. They can bring out a prurient interest in suffering, and their accounts of history may be suspect or missing. Being busy with my project and alert to these issues does not mean I was immune to them, or to the power and pathos of the sites. I am still processing the experience and intermittently reading more about these topics. Finally, I’d say that I’ve come to realize how often genocide happens.” 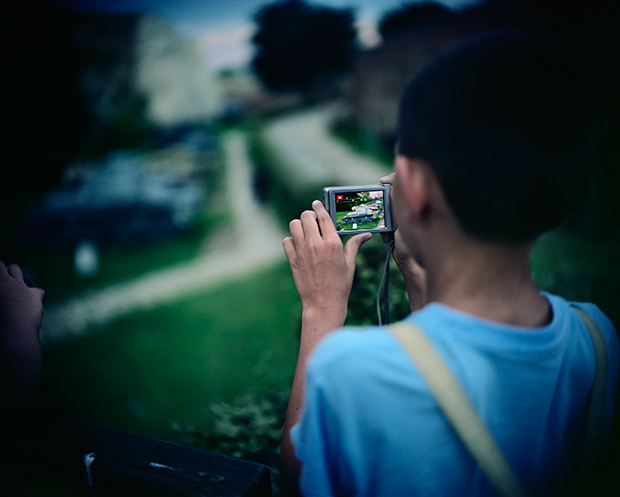 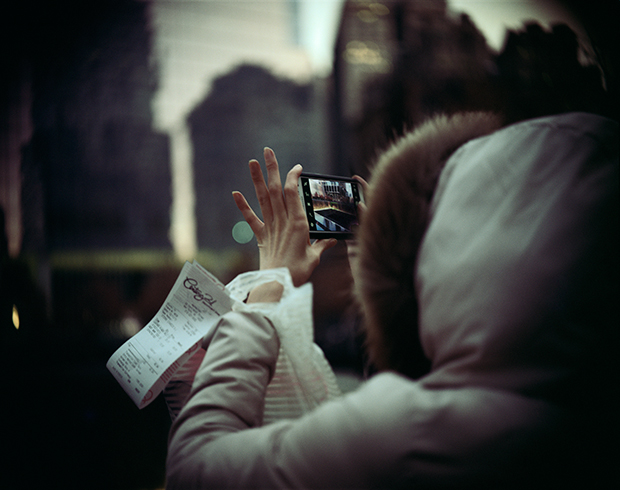 What was it like to focus so intently on this particular and curious aspect of human nature, the desire to record evidence of one’s presence in the places one visits, even at the sites of such terrible occurrences?
“Paradoxically, isolating this one action opens many questions. Why do we visit these sites, and how is it different if one has a personal connection? What are appropriate responses and behaviors when visiting? Which atrocities are memorialized, which are not, and why? What are the power relations built into such tourism? And, of course, what does it mean more broadly to compress experience into something the size of your hand, and have those images largely become your memories? Does this validate or debase the time and money one has spent to visit a place (or both)?”

“I see the impulse to photograph at a memorial as partly defensive—raising a camera puts distance between oneself and something overwhelming. I find myself quite sympathetic to this impulse as these sites can be hard to look at. And memorials themselves, again in parallel with photographs, have this dual function of presentation and distancing, focus and distraction.”

“I think my images point in two directions at once, to how visitors manage their impressions and to the emotional and imaginative power that inhabits these places. That power seems strong, however. I think many people feel it even in my photographs of photographs of memorials—effectively third-hand. I had a lot of time to observe my fellow visitors and their responses, which ranged from reverent and deeply affected to uncomprehending or even thoroughly crass. I came to realize that particularly when visitors are in a group, taking photographs is a socially acceptable behavior, and even a way of socializing within the group, in a place where it is somewhat difficult to know what the right behavior is. So it becomes a kind of refuge. The contemporary use of photos on social media is an extension of this idea to the virtual world, I think. In this context it was interesting to watch people struggling with themselves about whether to photograph at some of the most grim places, such as the only remaining intact Nazi gas chamber at Majdanek concentration camp. In the end, though, I’d have to say that other people’s motives for visiting these peculiar places and what they think and experience are still quite mysterious to me.” 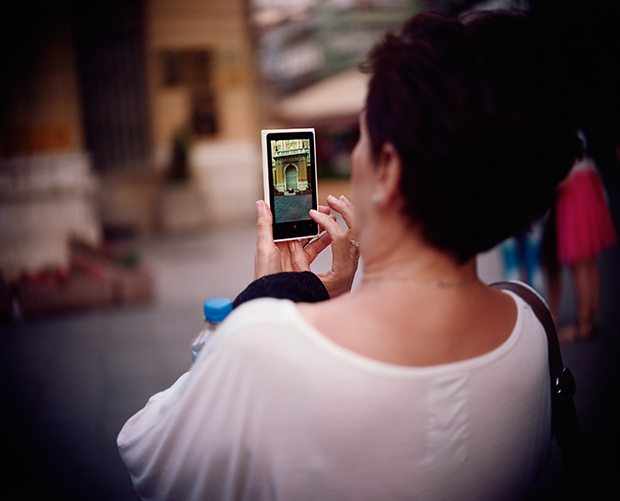 Eternal Flame Memorial to the Military and Civilian Victims of the Second World War in Sarajevo. Sarajevo, Federation of Bosnia and Herzegovina 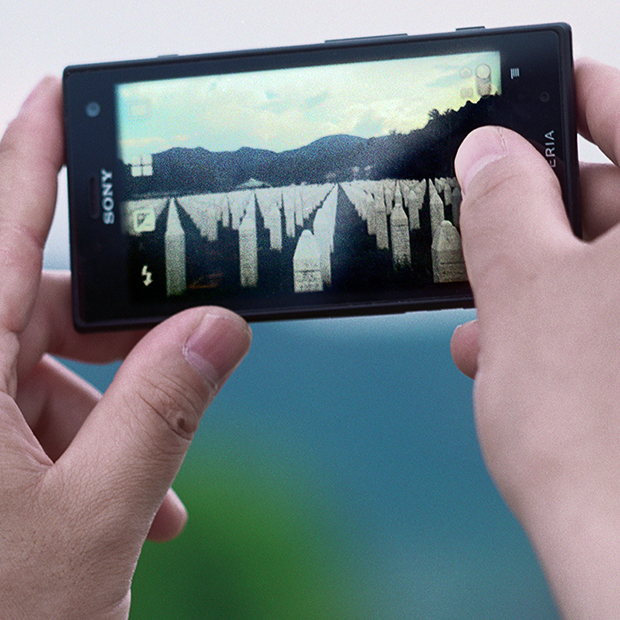 Srebrenica-Potocari Memorial and Cemetery for the Victims of the 1995 Genocide. Potocari, Federation of Bosnia and Herzegovina (detail)

All images © Ben Altman. Altman is a member of the 2×2 Collective. He will have work on view at the Filter Photo Festival in Chicago, opening September 5, 2014, at the David Weinberg Gallery.