It Felt Like I Knew You: Subway Commuters React to a Stranger Invading Their Space 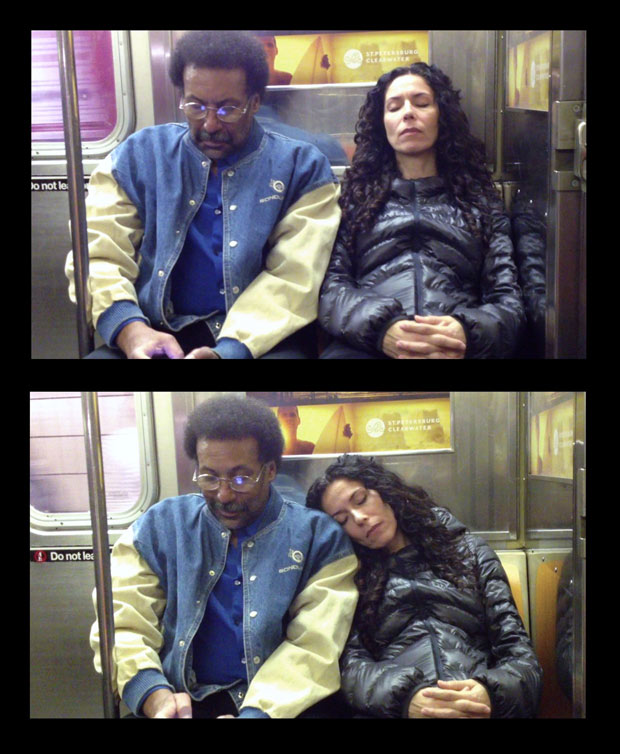 Part performance, part photography project, it felt like i knew you explores the space between two strangers on a crowded subway. Brooklyn based artist George Ferrandi, sees this space like a complex made up of societal norms, personal fears and loneliness. In an attempt to break down these barriers between strangers, Ferrandi awaits the moment where there is a palpable shift in energy, where the stiff and guarded space between two people is reshaped. She then gently rests her head on that person’s shoulder to see what happens next. 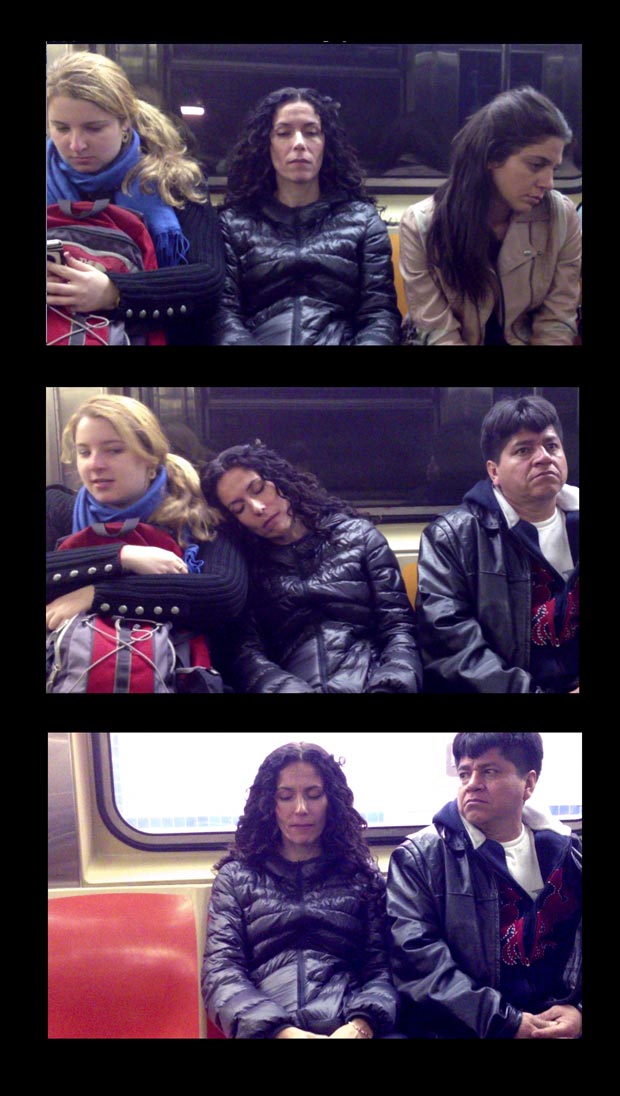 What triggered you to start this project? Why did you choose the subway as a place to interact with these strangers?
“It was a decision born of loneliness. In New York, it can be easy to feel ‘alone in a crowd,’ but even more so on a crowded subway. We’re often exhausted from the day and crammed together, making physical contact with many people, but not actually interacting in a caring way with any of them. More than once, I found myself on a packed train with my head an inch from someone’s shoulder, wanting so much the comfort of that human connection, but recognizing how transgressive that tiny gesture of intimacy might be. It’s a very specific and mysterious dynamic that I think is singular to, or at least magnified on the subway. On the bus, for example, it’s not so crowded, we face forward, we can look out the window; we are not removed from our lives or our living landscape in the way that we are underground, so people interact with each other more comfortably. The subway is primally scarier – we are under the earth, after all – so we feel more vulnerable and necessarily more protective of our bodies in that space.” 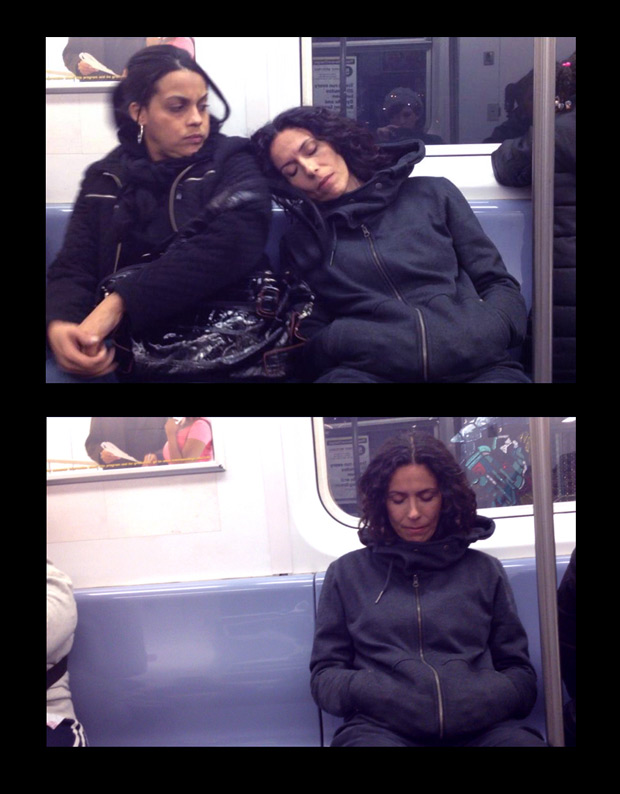 Do you lean on whoever happens to sit next to you, or do you seek out a specific person?
“Whoever the stranger was that happened to sit next to me. I like to think that we’ve invented the characters that we are for the stories that we are living. Sometimes it takes an interaction with a stranger for us to expand our character’s limits. We can be braver or bolder or smarter or kinder or sexier with strangers, because we can reinvent ourselves in their eyes.

I also think it’s easier for us to see the poetry in interactions between strangers – to recognize the broader metaphors latent in simple human exchanges.”

What is the most common response when you “fall asleep” on someone?
“Actually, I never think of what I was doing as pretending to fall asleep. My background is in sculpture and I am really trying to treat the space between me and this person next to me like a complex, invisible sculptural material – made of social norms and personal fears and limited time and loneliness – and reshape it.

But to answer your question, there has been a range of reactions. Some folks jiggle their shoulder immediately, presumably to ‘wake me up;’ some lunge dramatically away and move to the other side of the train car, or leave the car completely; some are more gentle in their nudging; and some just let me rest my head on them. I decided from the outset the person I lean on would determine the ending. Once, it ended after a very long time with my head on this person’s shoulder, when he finally said, ‘Miss…Miss… this is my stop.'” 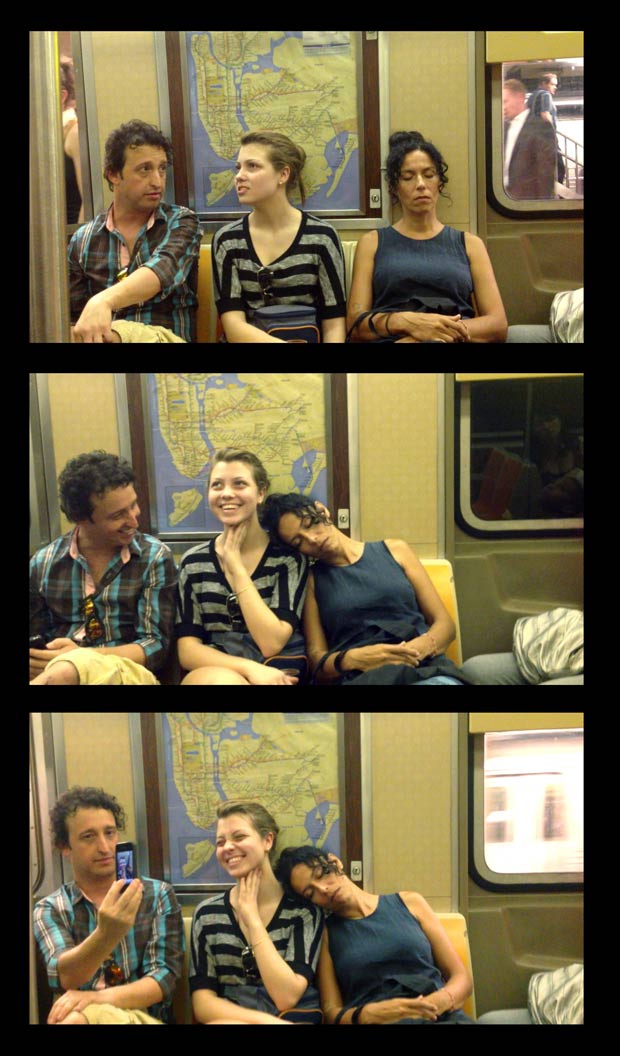 What is the most memorable encounter you have had with a fellow commuter?
“Before I actually started doing this project, I was just riding the train thinking about it and wondering whether I could get up the nerve to essentially love and trust a stranger enough to lean my head on them. The elderly man next to me had dozed off and I started ‘practicing’ – focusing on mentally reshaping that space between us to a more familiar one. I didn’t physically move even the slightest bit; I just convinced myself I knew him and loved him, and relaxed my body next to him, as if he were already my friend. In his sleep, he reached for my hand and rested his hand on my leg – not in a sexually charged way, just in a ‘gentle human contact’ way. After riding like that for sometime, he started awake and was genuinely mortified and apologetic, explaining what was happening in his life that might have made him need that comfort. He got off the train still apologizing, but I knew that I had cleared the path for that familiarity just by softening the space between us, and that there was the potential to experience something powerful through this project.”

What role does the camera play in this project?
“I ride with an assistant, Angela Gilland, who clandestinely records these fleeting relationships on her phone. She wears a headset and moves her thumbs a lot, so it seems like she’s playing a video game. (I’m pretty sure the guy on the 1 train was on to her, though. But I don’t think it occurred to him that we could possibly have been together.)

The camera allows the audience for these ideas to expand beyond the few people who actually witness the intervention/performance live on the train. It also helps isolate these interactions from the countless others occurring simultaneously on the train, and frame them into relatable narratives.” 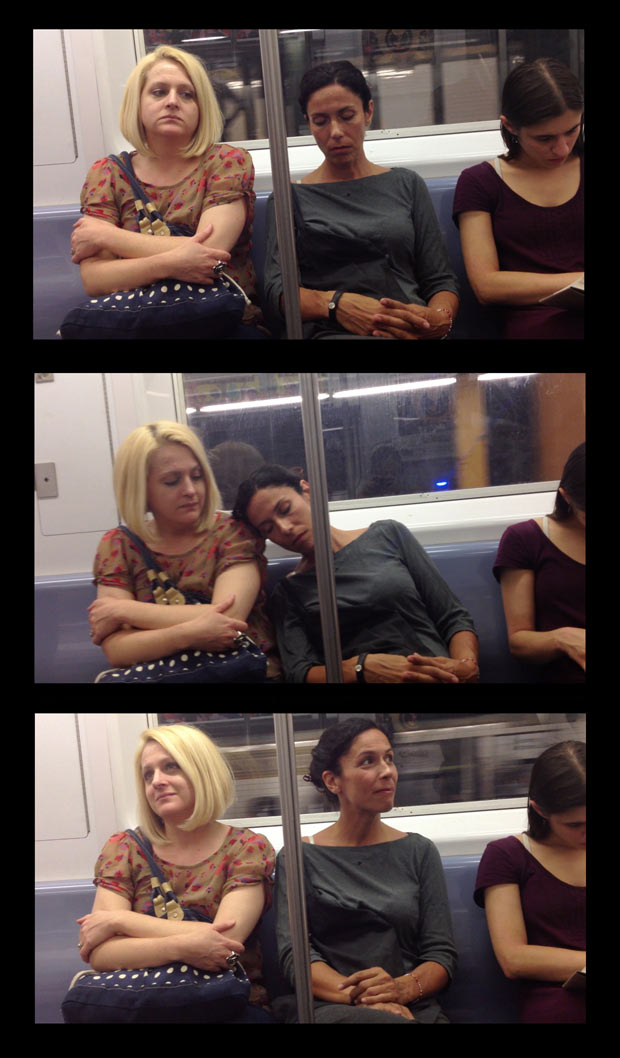 All images are stills from iPhone video shot by Angela Gilland