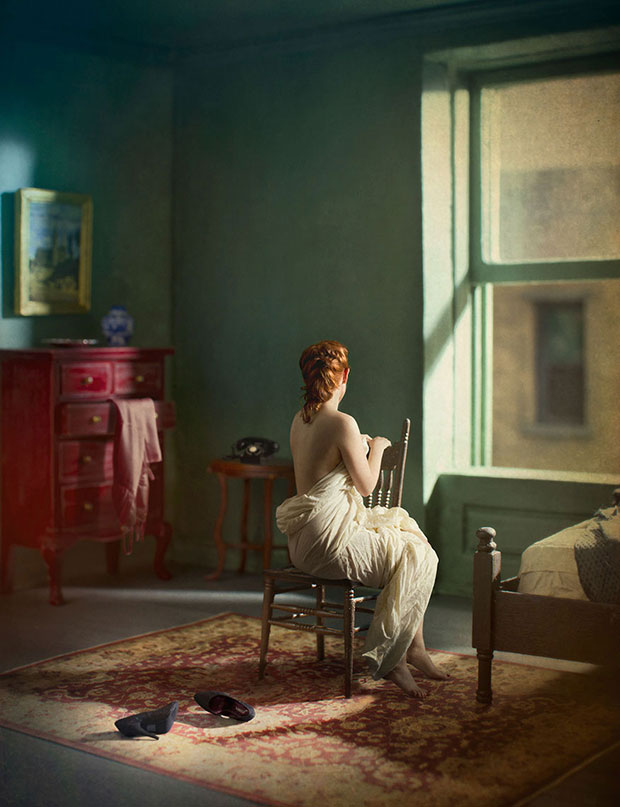 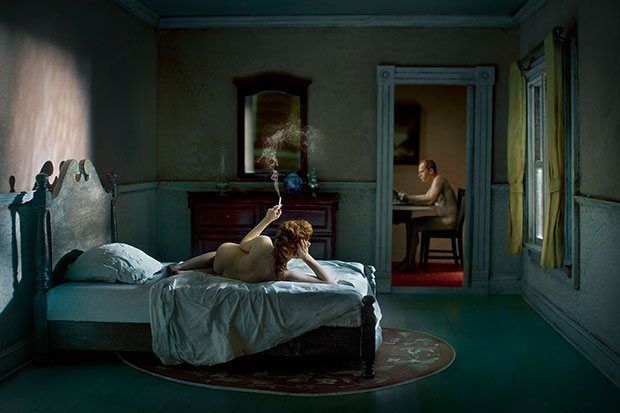 Imitation may be the sincerest form of flattery, but it can often go so wrong. Painter, photographer, and “assemblist” Richard Tuschman, set his sights on Edward Hopper for his series Hopper Meditations, resulting in a take on and a nod to Hopper’s command of mood, composition, tone, and hue, and an ode to his vision and unparalleled singularity. The reverse of “photorealism” (what could we call that?) occurs in this series, with Tuschman’s playful take on Hopperesque scenes, replete with apartment details, cityscapes, and the unspoken malaise of a woman too beautiful to be let out of the house. We asked Tuschman for details about this tonally arresting work.

How did you want to see Hopper’s work echoed photographically? And do you have a background in painting?
“I wanted to do a series of staged figurative narratives, somehow connected to past art, but also something I could take ownership of. The sets are all painted dollhouse size dioramas that I built and photographed in my studio. A lot of the furniture is standard dollhouse furniture, but some I made myself. I photographed the models against a plain backdrop, and then made the digital composites in Photoshop. This method gives me a great deal of control over every aspect of the process, and I can do it all in my small studio.

“The idea of digitally marrying dioramas and live models brings together several of the different working methods I have employed from the past 30 odd years. When I first moved to New York after art school around 1980, one of my first jobs was working in an architectural supply store. The model building materials there inspired me to make a series of miniature painted “stage set like” box constructions. The tone of these was surreal, and a human presence was often suggested by collage or painted shadows, or sometimes an actual painted clay figure. I worked this way for most of the 1980’s.

“The introduction of Photoshop in 1990 launched my (ongoing) career as a digital photo-illustrator. Since I have been working in Photoshop almost everyday ever since, I felt confident I had the digital chops to manage the technical part convincingly. I began seriously photographing live models several years ago for my book cover assignments.

“I love the physical presence of paintings, but for me, more than any other medium, photography is unsurpassed at describing and emphasizing the visual richness of our physical world; its poetry and its subtlety. I studied painting in art school, and made a series of attempts at being a serious painter intermittently from 1990 to about 2005. I love the process but unfortunately the results were mixed, at best. I consider myself a failed painter, but the experience was invaluable to my photographic work.” 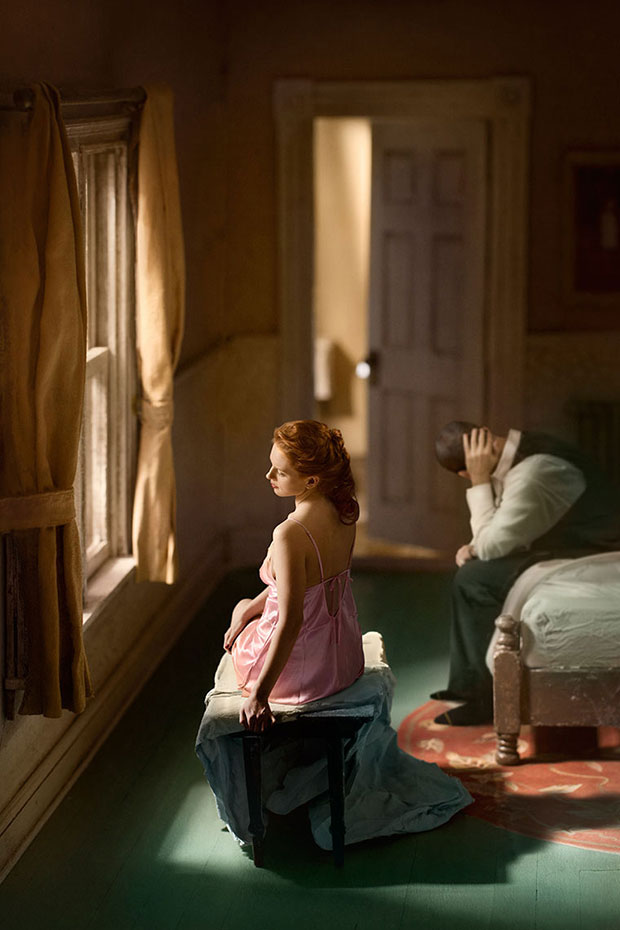 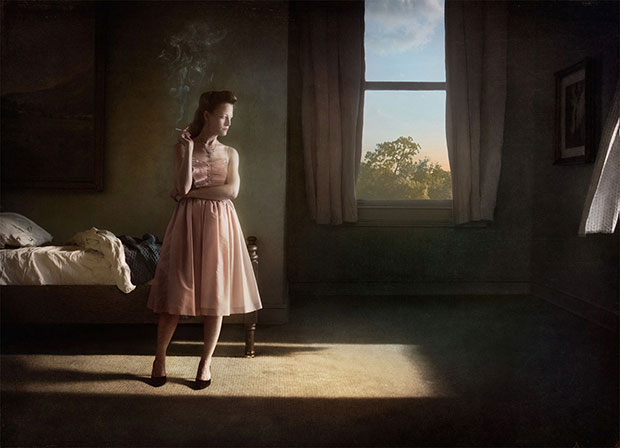 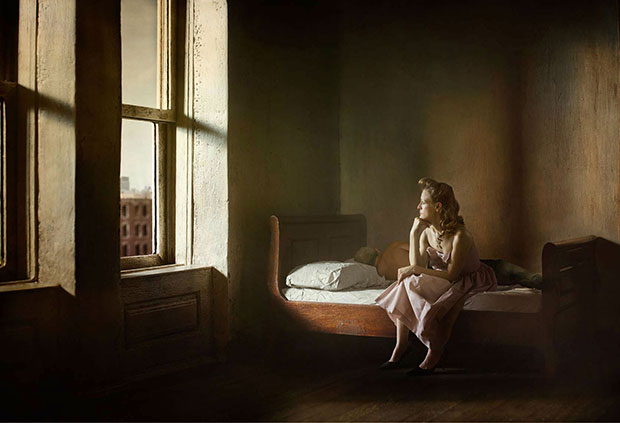 What is it about Hopper that inspired you to make this series?
“Why Hopper? First of all, Hopper was a master at using light to expressively illuminate his subject, especially sunlight through a window. Additionally, I have always loved the way Hopper’s paintings, with an economy of means, are able to address some of the psychological mysteries and complexities of the human condition. I love the humble nature of the works and their sense of quietude. The characters’ emotional states can seem to waver paradoxically between reverie and alienation, or perhaps between longing and resignation. I also liked that many of them seem to be set in New York City, which is my favorite city, and where I live.” 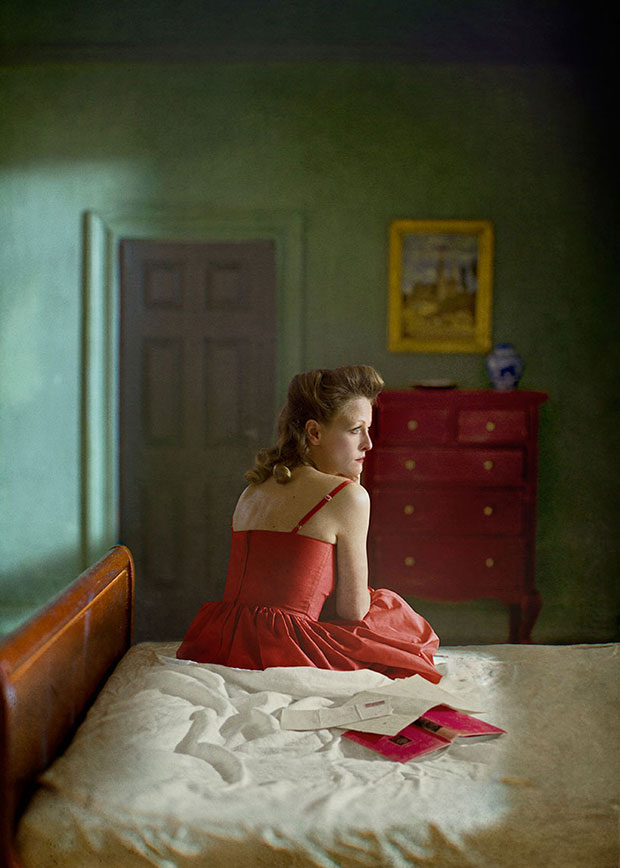 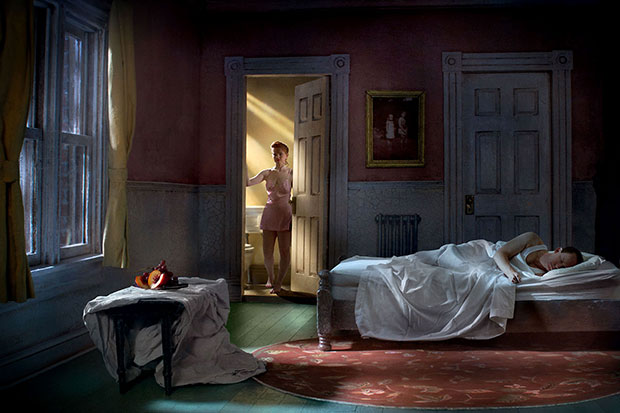 What did you learn about yourself (as a man/photographer) in the making of this work?
“Making the dioramas, I learned how much detail and complexity we take for granted in the full-size actual physical world. Photographing the models taught me that I still have a very great deal to learn about lighting and photographing people. Doing the post-production reassured me that I am pretty good at Photoshop, and I have a good eye for detail, but not as good as my printer, Tom White, who is always finding things that I missed.

“As an artist, it was gratifying to realize I could create a pretty complicated self-generated project from start to finish, after spending most of the last twenty five years in the commercial world, where in almost all cases the client is telling you what to make.” 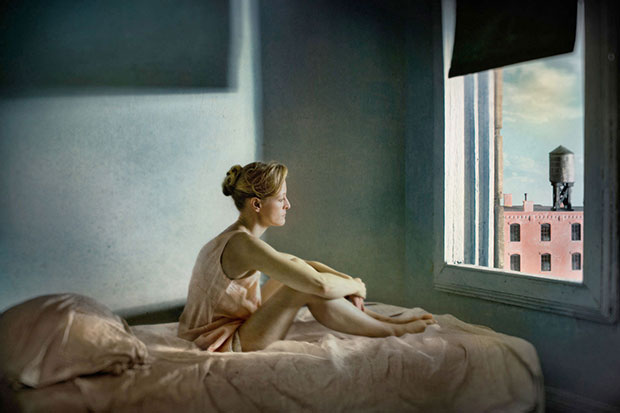 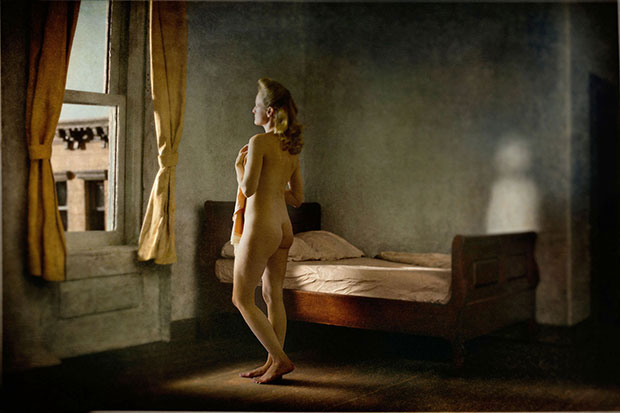 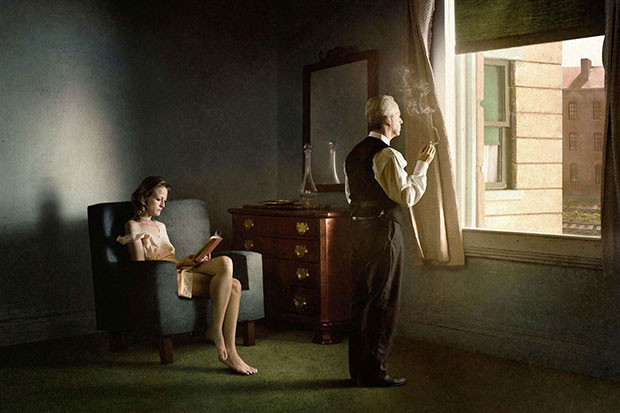