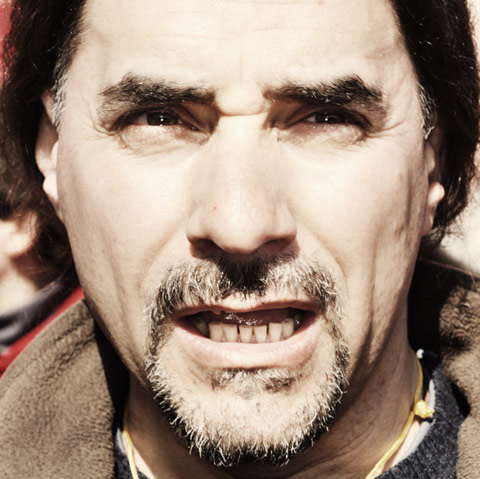 Rome – March 9, 2012 – L.A., 53 years old: “We play an important role in Italy and nobody cares about us. I’m here in the street with everyone to cry my indignation. There’s too much unjustness. I don’t see a good future for the workers; there’s still such a long way to go. It is a difficult moment but we have to stay together, be supportive and keep being what we’ve always been. Simple workers, but the first ones of all!”

Images of unrest around the world are plentiful. From the onset of the Arab Spring to Occupy Wall Street, photographers have been portraying the strength and vulnerability of ‘the crowd’ in diverse and captivating ways. For nearly a year, Stefano De Luigi, a Milan-based member of VII, has captured the faces of unrest during social protests in Italy in his series Screamers. Italy has been in the midst of an economic recession for the last three years, resulting in a dramatic restructuring of the country’s systems and politics. Reframing each of the faces in a compelling shift from the wide shots of some of the more rote methods of traditional photojournalism, De Luigi compiles a collective identity of outrage. We recently asked him more about the project and about what’s going on in Italy. 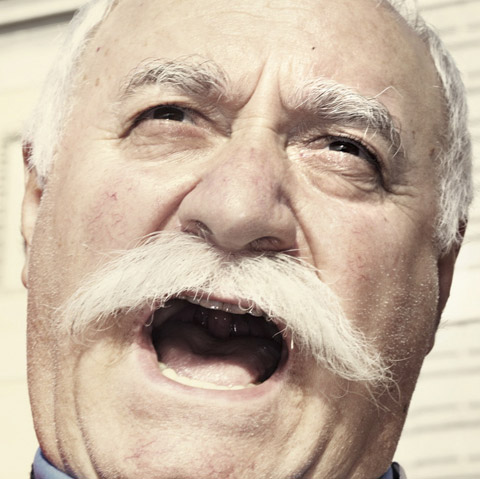 Rome – October 28, 2011 – D., 65 years old: “I’m angry. I’m outraged at how things are going, especially for us, the retirees. I’ve been retired for 10 years now, and have always received the same amount of money. The government cannot take advantage of us, the poor ones!”

Give us a bit of context here, which protests did you mostly attend? Can you describe the feeling in the air?
“I worked extensively for about a year on the social protests erupting in the country. Italy has been facing an economic recession for about three years now and the crisis is reaching its peak. What I tried to photograph is the terror felt by the middle class who are losing all the conquered certainties they have acquired over the last 50 years in Europe—this includes widespread wealth, secure jobs, free and high-quality education, and one of the most efficient healthcare systems in the world.” 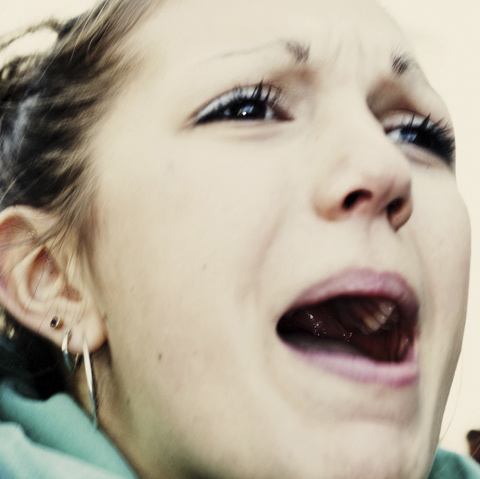 Milan – November 17, 2011 – C., 16 years old: “To be outraged means to be tired of everything that we have to face, because we are not pawns to be moved on a chess board. We have freedom; well we should have it. We are autonomous, we do not need people to tell us what to do. We are tired! Tired of putting up with all this!”

Regarding the image format, why did you choose to focus on faces only and not the wider scene?
“I deliberately decided to focus on expressions—sometimes very dramatic ones. Images of masses in protest are not able to convey this sense of social discomfort affecting many citizens in Italy, and broader Europe. These frozen faces in a screaming expression of rebellion, terror, and sometimes anger better reveal the drama that many are facing.

Are you still covering European unrest? In what capacity?
“The project continues. I will soon cover other countries including France and Spain.” 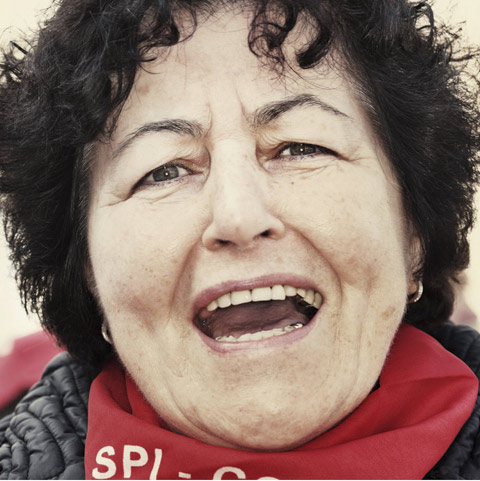 Rome – October 28, 2011 – R., 60 years old: “I’m outraged at everything that is happening. It is a shame to have a government that we do not deserve at all. Especially for those of us that have fought for many years. We do not deserve it and neither does the younger generation.” 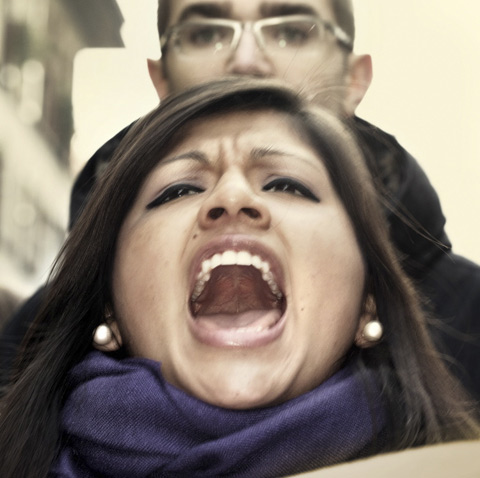 Milan – November 17, 2011 – J., 17 years old: “They use our money to save the banks and not our own rights. If they want to save our future, in the end they have to invest in the young generation and not on the banks.” 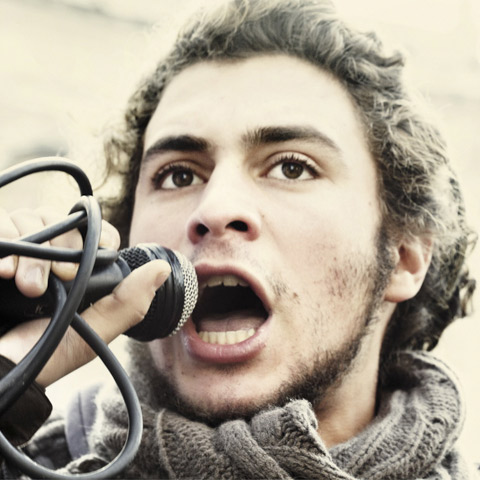 Milan – 17 November, 2011 – A., 18 years old: “I’m outraged because it is absurd to think that we can solve the situation by cutting funds to all sectors that contribute in the formation of conscious citizens (school, culture, welfare). They can’t reduce funds aimed at health and education to save the banks, to pay a debt we are not responsible for.” 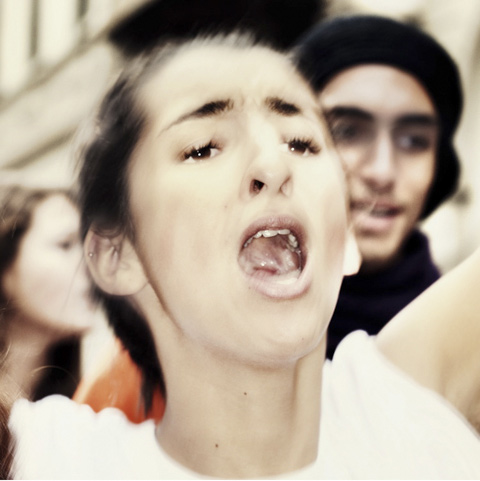 Milan – 7 October, 2011 – J., 15 years old: “We want a future. Unfortunately our government does not permit it, but we will not permit them to let us live in ignorance. We are not like them. We are the young people of today, we are the future. They need to understand that it is in our hands and not in theirs.” 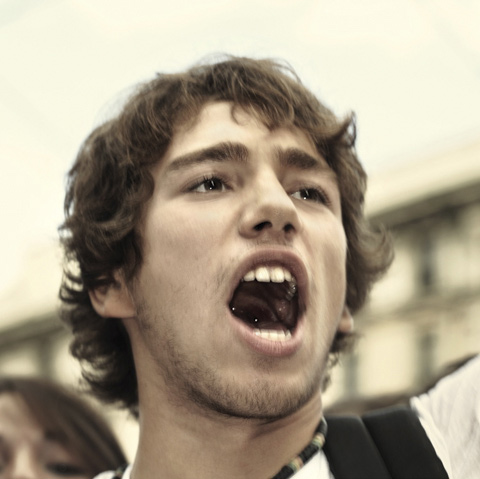 Milan – October 7, 2011 – M., 16 years old: “Outraged?!? I’m against the government, against Berlusconi. Because it’s unfair—the money that should come to us students is spent for an army that is only causing harm, and the country is not earning anything.” 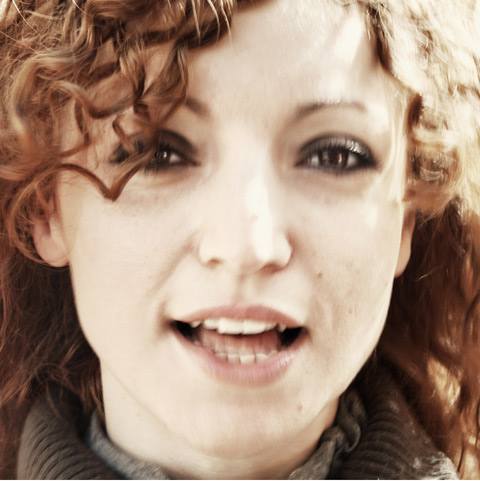 Rome – March 9, 2012 – F., 34 years old: “To be outraged means to regain my dignity and hope to spread this message to as many people as I can. Like never before, it’s important to let them know that we are here and we can still do something to change.” 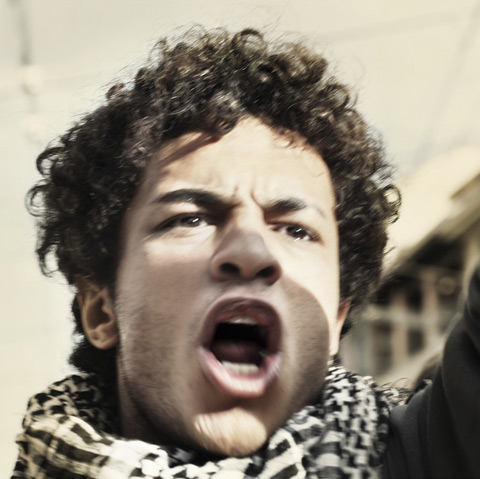 Milan – October 7, 2011 – S., 18 years old: “I’m outraged because the government has cut funds to public schools, while it continues to finance the Afghanistan mission which kills women and children. Shame on you! Gelmini, Berlusconi you are disgusting.”