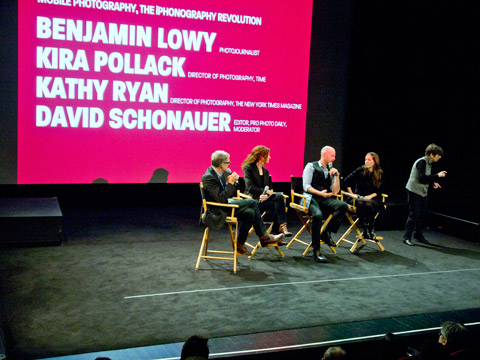 Smartphone photography: it’s fast, low-key and fun, and a quick look at Instagram will tell you that photographers are increasingly using it for artistic and journalistic purposes. But what kind of future does the technology have, and is it changing how we see the world? Do assigning editors take it seriously?

These questions were addressed recently at the panel iPhonography, as part of ‘Big Talk,’ a half-day conference organized by American Photography and American Illustration at the SVA Theatre in New York City. To tackle the issues, American Photography’s Pro Photo Daily assembled an impressive panel, from prominent photo editors Kira Pollack [@kirapollack] of Time and Kathy Ryan [@kathyryan1] of the New York Times Magazine to photographer Benjamin Lowy [@benlowy] and David Schonauer, editor of Pro Photo Daily, who moderated the panel.

Ryan and Pollack began by speaking about different ways in which their publications have used smartphone images in the last few years. For a 2010 New York Times Magazine cover story about twentysomethings, Ryan said, she commissioned smartphone images because she felt they fit the subject matter. “We never had any objections…we see it as one more way of making pictures,” she said.

Pollack recalled Time‘s 2012 coverage of Hurricane Sandy, when photographers in the field were assigned to send images directly from their phones to the magazine’s online feed. Not only did this allow for instantaneous reportage, she said; it also provided a safeguard in case power outages prevented image uploading from computers. Also, she pointed out, the photo feed is a way for Time to reach younger readers. “The vehicle of Instagram is amazing and revolutionary,” she said. “It gives us access to a whole different audience.”

After Hurricane Sandy, when the New York Times Magazine was doing a cover story about the storm, Ryan chose a smartphone image for the cover over images shot on D-SLRs. “It was an artful image, we used it for that reason,” she said. “We didn’t just do it to make a point.”

Lowy, who was one of the photographers contributing to Time‘s Hurricane Sandy feed, echoed the idea that smartphone photography was “just one more tool” in the photographer’s box. However, he pointed out, iPhonography is subtly changing the way he works. “When you’re making an image someone might look at on a phone screen, you can’t have a tiny figure because people wouldn’t see it,” he said. The act of photographing is different, too, he said: “Both eyes are open, you’re holding the phone up in front of you. You’re experiencing the world without a shield.”

Instant uploads and feedback mean that, as a photographer, you have “your own distribution channel, your own magazine,” said Schonauer. Lowy said how important this has been for him: “You already have an audience that wants to hear what you have to say.” Ryan, who has her own Instagram feed, called it “a crazy communication medium. Because I’m a visualist, I love it. It’s intoxicating.”

When it came time for audience questions, one woman wanted to know if Ryan and Pollack had ever hired photographers based on Instagram images. “Yes,” said Ryan, citing the case of stuntman-photographer Mike Escamilla, whose high-octane action images had impressed her on Instagram. A few months later, when commissioning a story on the new high-speed yachts sailing in the America’s Cup race, Ryan thought of Escamilla. “I’d never seen his work anywhere else. Instagram can be a great way to discover new work, because you can do it at home at night,” she said—which is more relaxing than trying to evaluate work in her “very intense” office, she said.

Bottom line? “Instagram does matter, it’s something I think everyone should be on,” Pollack said. “Your audience can grow so fast. It’s a good thing to do; you should take it seriously.” Lowy gave the audience—largely composed of visual art students—a handy tip for boosting their visibility on Instagram. “Look up what the top ten trending tags are, and use those tags on your work. You’ll get more viewers.” However, he pointed out, nothing lasts forever and photographers should be ready to move with the times. “Instagram is hot right now, but will it exist in two years?” he wondered. Whether or not it does, it seems iPhonography is here to stay. 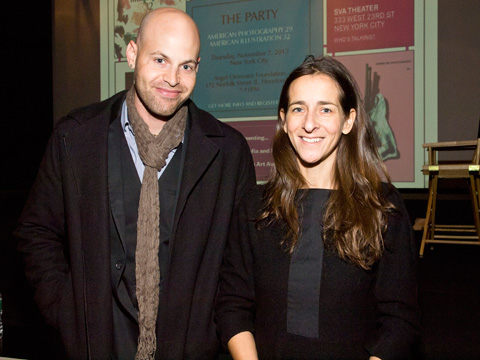 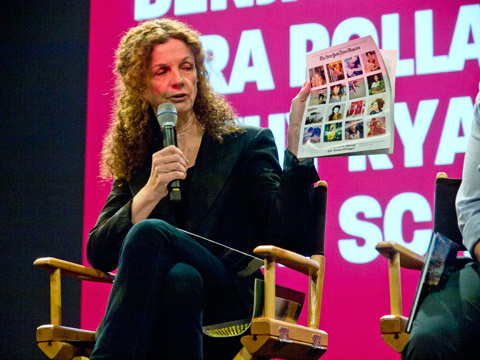