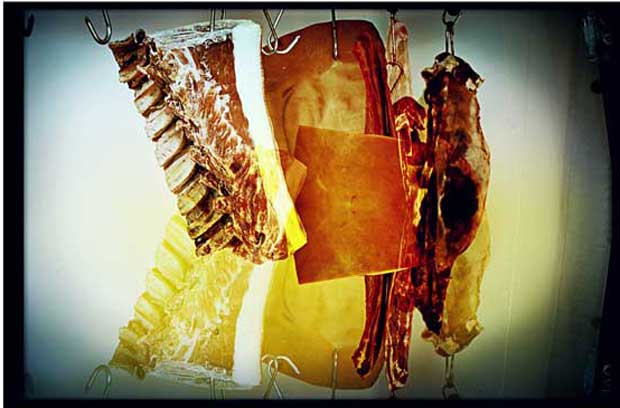 The British photographer uses old-school cameras, smartphones, and apps to create unique compositions that encourage the viewer to look just a little longer, discovering more about the piece as they dissect its layers.

His new series entitled Food for Thought employs this technique, the results of which are on display at London’s new The West Contemporary art space at the iconic Kerridges Bar & Grill at the London Corinthia Hotel (the restaurant is owned by the double Michelin star chef Tom Kerridge).

The pieces exhibited there were inspired by a day spent with Tom and his culinary team in his first restaurant (The Hand and Flowers) and taking shots both in the kitchen and the surrounding areas in Marlow and inside the hotel.

According to Barker, the collaboration with Tom Kerridge redefines the way we see art, encountering it in a place where we don’t often encounter and stop to appreciate it. He told Feature Shoot: “The hope is that people who view my work are engaged by it and see an otherworldly expression of the everyday. Another way of seeing the world we live in.”

You can check out the rest of our interview with Barker as he talks more about his new series Food for Thought. 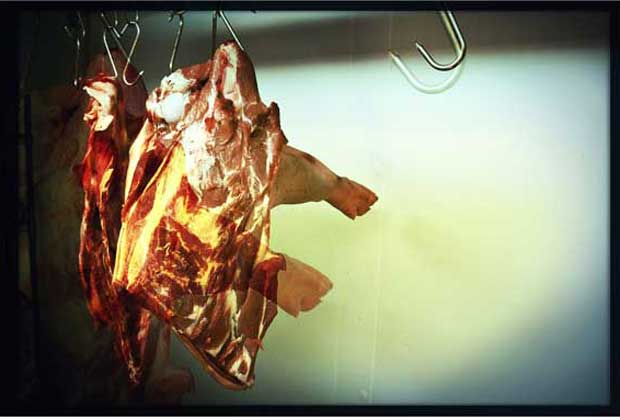 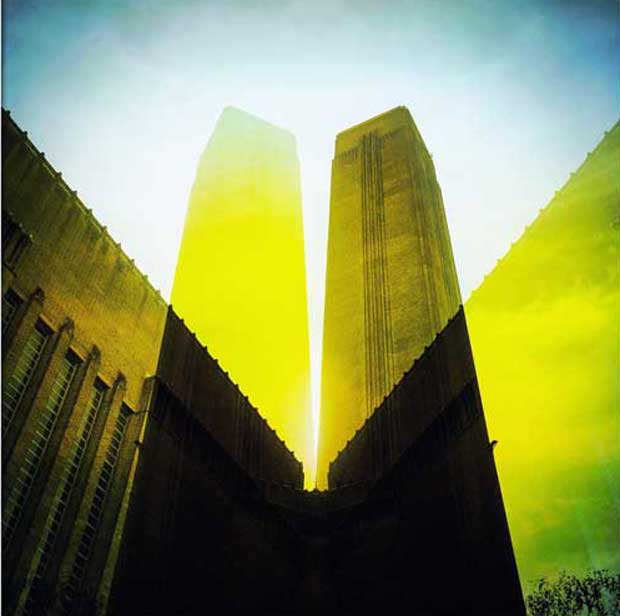 How did you get into photography?
“I was originally interested in cinematography. When I first moved back to London I worked in film and television. First as a runner and then later as a clapper loader and camera assistant on various commercials, TV idents and a couple of short films.

“I then drifted away from the industry and became interested in photography initially using an old Polaroid SX-70. When the iPhone came out I became interested in the use of various apps to play around with images and started using my phone as my primary tool for capturing and manipulating images. This is what first got me noticed as an art photographer and got me commissioned work from the likes of Microsoft, Becks and Spurs Football Club.

“I now shoot mainly on DSLRs and mix my post-production process between iPad/iPhone apps and Lightroom to produce the finished pieces.”

How did you discover or develop your style? And how would you describe it?
“My photographic style when it comes to my art images is to use multi-layered and mirrored images saturated in colour or layered with textures on the black and white images. Much of my work has a surrealist element using layered real-life images to create something more dream-like.

“Using apps allows me to get real-time preview ideas for the final images and gives me some guidance as to how I want to shoot the subjects. It also allows me to experiment while shoot which often ends up informing the final piece. I tend to render at least 3-4 versions of the shots before narrowing down my final choices.” 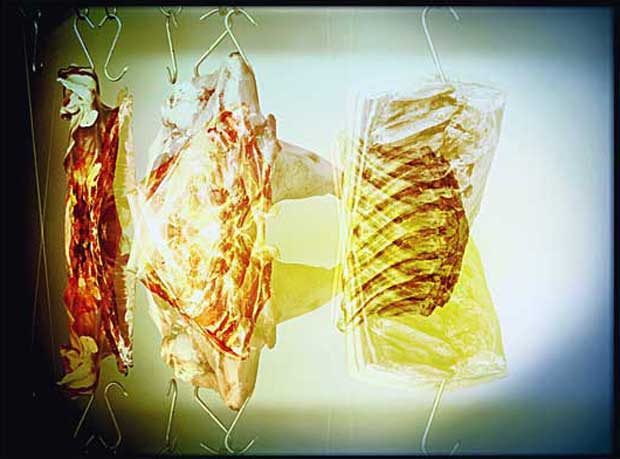 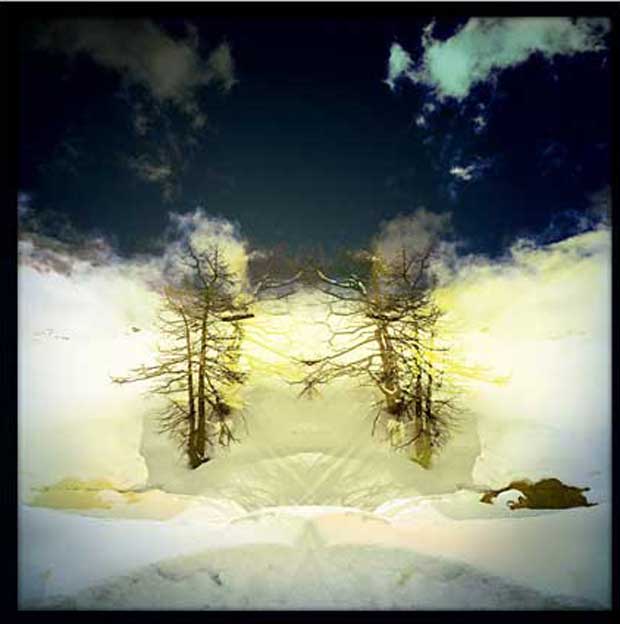 “As this was a commissioned project it was important that each piece be relevant to Tom as a chef and that they each connected to his heritage in Marlow and the sites that first brought him to prominence as a chef. As such I looked at the key tools he used such as his set of knives and his dedication to sourcing the best quality ingredients such as incredible cuts of meat. Tom kindly gave me full access to his kitchens in the Hand and Flowers, The Shed and the Butcher’s Tap.”

What reaction do you hope your work will generate?
“The hope is that people who view my work are engaged by it and see an otherworldly expression of the everyday. Another way of seeing the world we live in.”

What’s your dream creative project? And what are you working on next?
“I am looking to work with a surgeon friend of mine to take pictures during some of his surgeries. I am fascinated with the mechanisms of the human body and this is an exciting opportunity to explore this.” 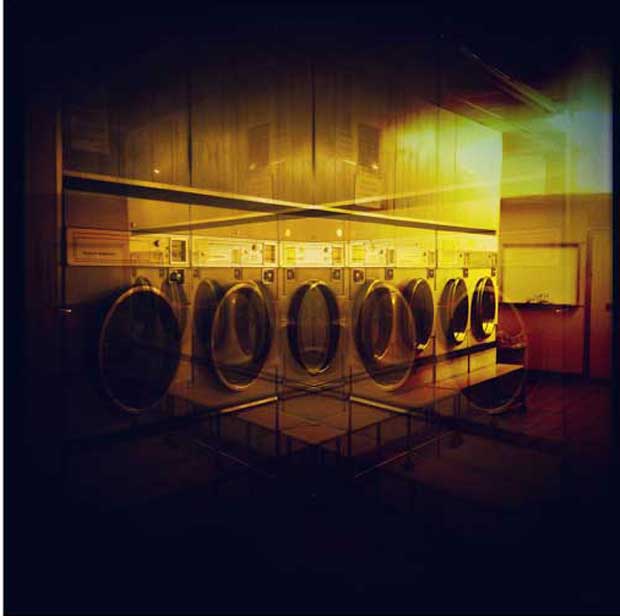 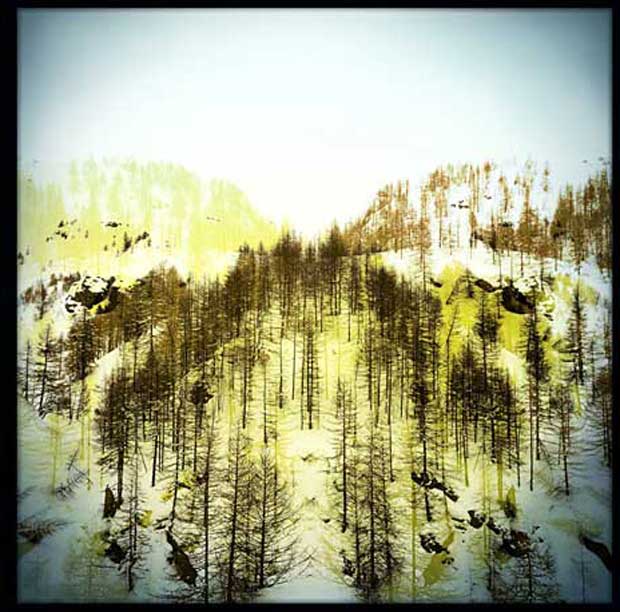