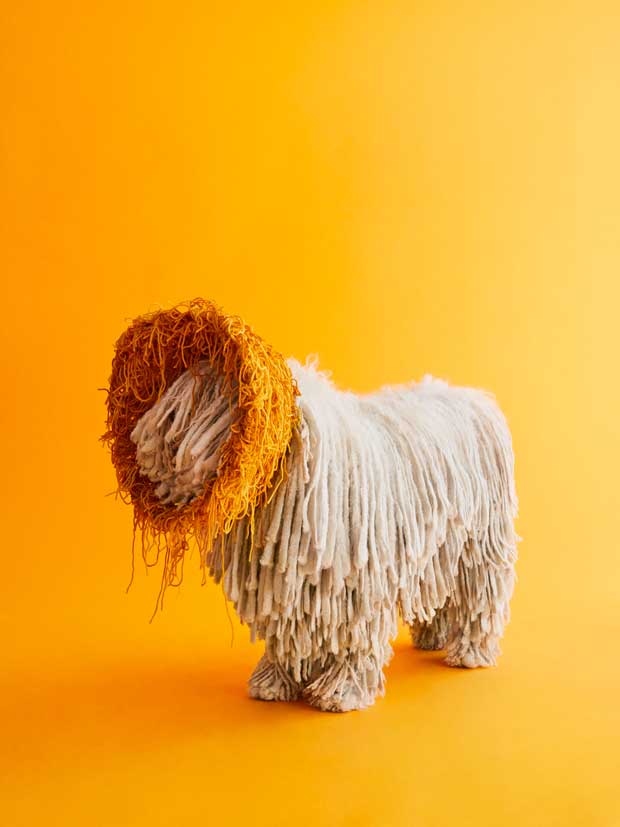 The portrait series, simply called Cone of Shame, features the amusing reactions of different dogs to wearing the conical contraptions. The cones were reimagined by costume designer Marie-Yan Morvan as functional sculptures, eschewing stiff plastic for other materials like feathers and eggshells, and turning them into designs inspired by cotton candy and sea urchin, to name a few.

According to Au, she came up with the idea for the series to show her love for dogs, as well as turn a stressful experience into a more dignified one. She told Feature Shoot: “With this series, I wanted to take that sad moment and twist it into something beautiful and majestic to take the shame out of the cone. In creating these images, my goal was to highlight and help raise money for rescue dogs who have urgent medical needs.”

We recently caught up with Au to find out more about her and her work. 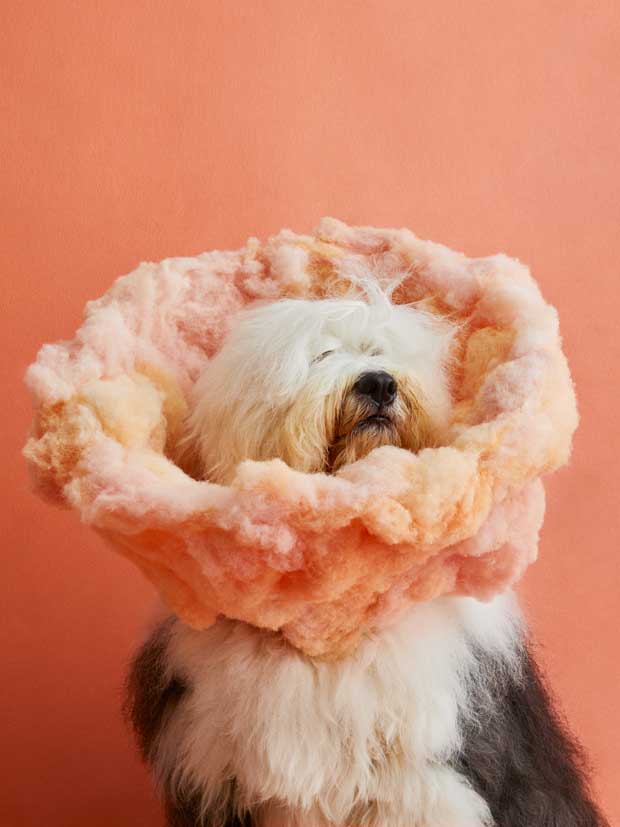 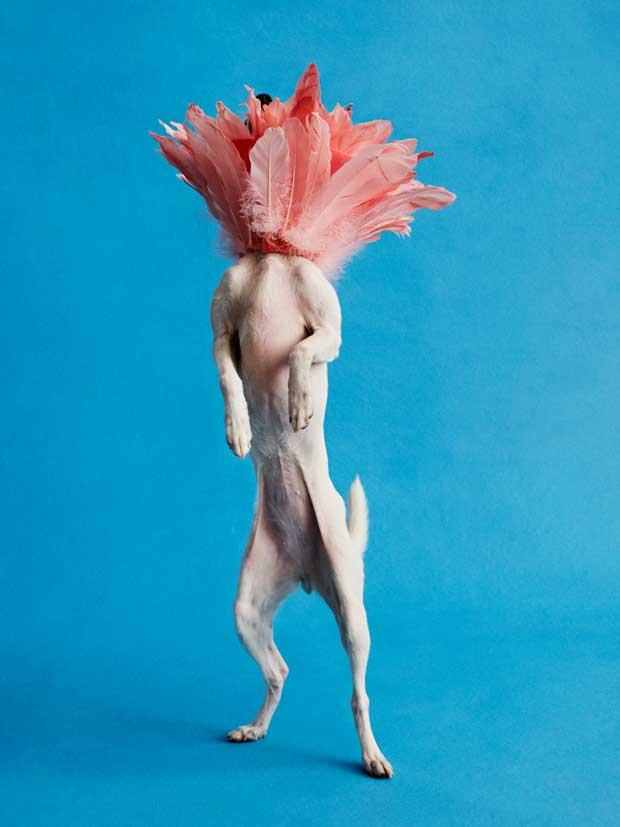 Tell us a little about your background – what path led you to becoming a photographer, and to doing what you’re doing today?
“I was a yearbook photographer in high school, so I learned the basics of photography by shooting and developing black and white film and photographing everything from football games and cheerleaders to the tennis team and mathletes. I wasn’t great at sports and I wasn’t popular, so photography helped me get out of my skin and see a side of high school that I probably would have skipped had I not been involved.

“I then studied communications and advertising at Boston University (because I loved infomercials and wanted to make infomercials), but about halfway through my program, I realized my true passion and natural talent was in photography. My photojournalism teacher Professor Peter Smith had a background in journalism and commercial photography, and he was really the one who let me know that photography could be your full-time job. I didn’t even realize that it was an option until he mentioned it. I had always imagined myself in a career that was full time and practical, like an engineer or scientist.

“Professor Smith suggested I consider photography as a career path, so I got a photography internship with commercial photographer Joshua Dalsimer. Josh is an amazing photographer, wonderful person and still one of my good friends and mentors today. I learned the professional side of photography from him – how to load medium format film, use strobes, run a clip test, etc. We had a lot of fun working together, and after that internship, I was hooked. I saw a field where your job doesn’t feel like a job, and that was (and still is) pretty appealing.

“Rather than change my major, I took as many photography and visual arts courses as I could, and I got another internship at BBC Good Food magazine in London. By the time I graduated college, I started studio managing and assisting for Joshua Dalsimer and a few other photographers in Boston. After a few years of working, I wanted to expand and learn from more people, so I moved to NYC, where I landed a job as a studio manager and digital tech full time for one year for Richard Corman. Digital photography was just taking off, so I got to see and learn all the fun quirks of working with a developing technology.

“From there I became a freelance digital tech and ended up working for tons of photographers and photo studios and rental houses around NYC. In the blink of an eye, I found myself turning 30 and realized I had come to New York to be a photographer, not a great digital tech or assistant. So I saved my money, fired myself from all my assisting clients, and got work at showing my portfolio and marketing it. I didn’t have work for about six months, but slowly little jobs trickled in. Within a year I was shooting full time, and within a couple of years I signed with the agency This Represents, and I’ve been shooting and repped by them ever since. I photograph people, animals, food, and the spaces where these things live.” 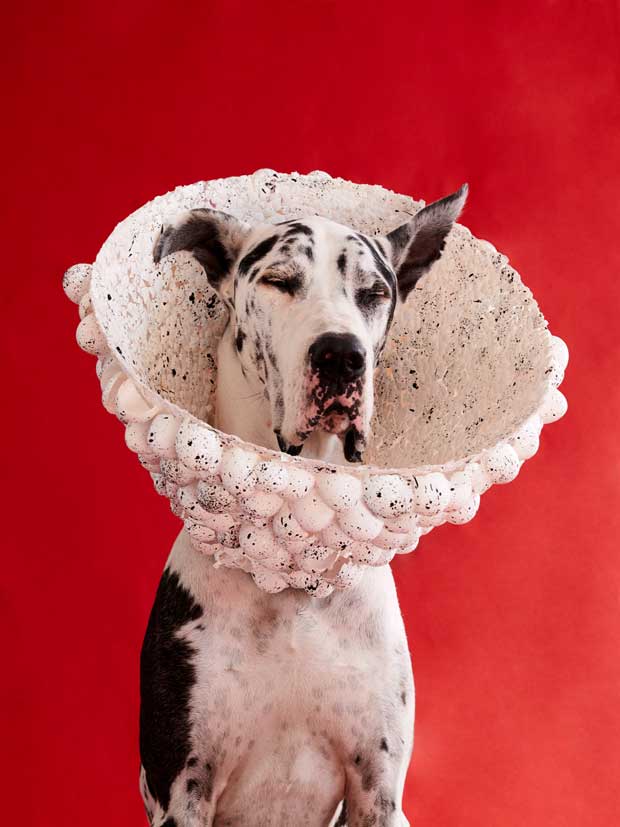 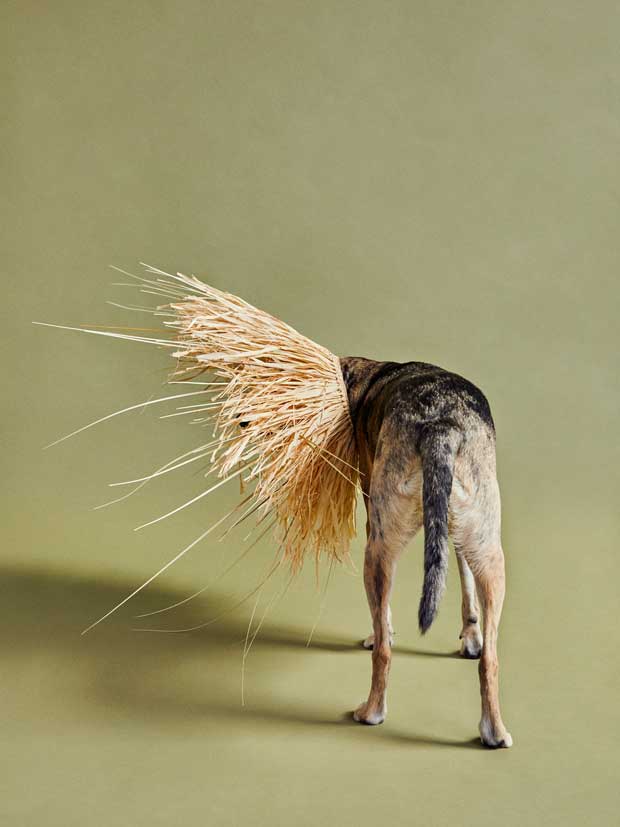 What inspired you to make a photo series based on dogs and their cones of shame?
“I had this series in my head for many years prior to me actually shooting any images for it. I’ve always noticed how comical and ridiculous dogs work when they’re wearing a cone, so that image and shape were sort of burned into my brain. Think of a Rorschach shape but instead of ink blots, my brain was seeing dogs wearing cones. With this series, I wanted to take that sad moment and twist it into something beautiful and majestic to take the shame out of the cone. In creating these images, my goal was to highlight and help raise money for rescue dogs who have urgent medical needs.

“I had a beautiful corgi named Tartine who very sadly got throat cancer not super long after we adopted her. We spent many difficult months in and out of hospitals, and during that time I learned the crazy high cost of medical care for pets. It’s terrible to have to make a medical decision based on finances. We had pet insurance so luckily we didn’t have to. But I want to help other dog owners and animal rescues find the cash for urgent care when they need it. Animal Haven is a no-kill shelter I am working with whose Recovery Road fund specifically gives funds to their rescues with medical needs.

“I recently funded a Kickstarter campaign to print a set of notecards featuring the series whose proceeds will be donated to Animal Haven’s Recovery Road fund. Anyone who is interested in pre-ordering the notecards or purchasing a print can buy them here.” 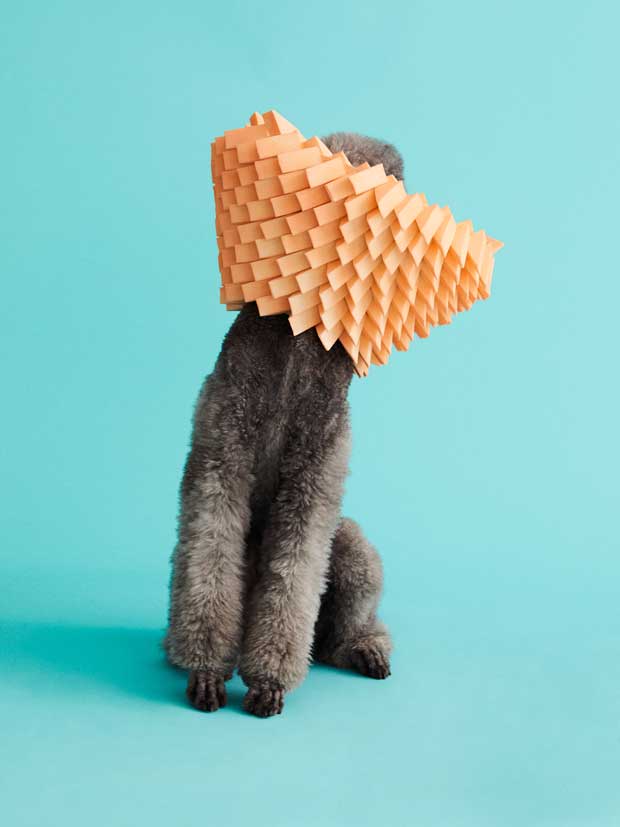 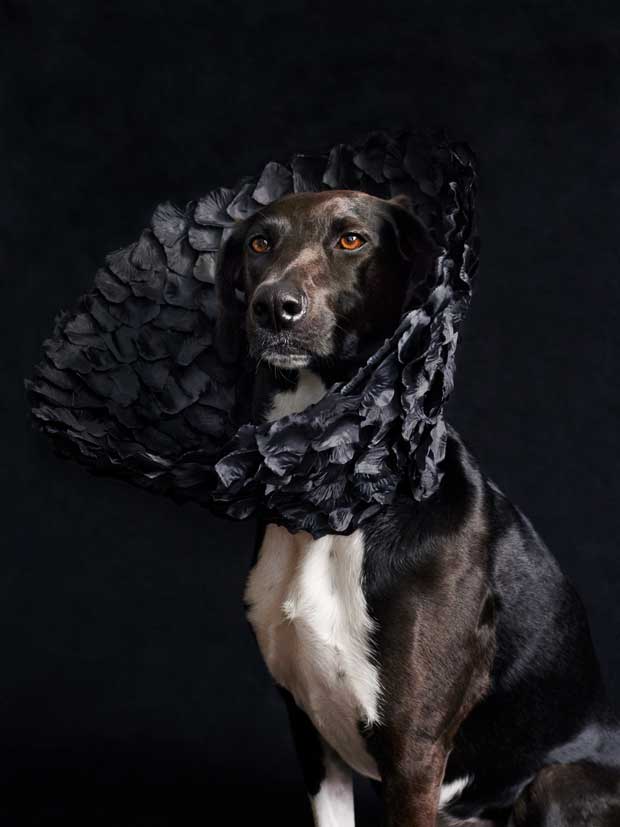 Can you give us a little insight into the creative process involved in the making of Cone of Shame?
“I worked with designer Marie-Yan Morvan to create the cones. I basically would come up with a concept for each shot – usually I either had an idea for a cone and we matched up a dog with it, or I had a specific dog in mind and we matched a cone to it. For example, for Penelope’s cone the inspiration was an image of a white sea urchin. I sent Marie-Yan some sea urchin photos and a color palette, and then I would ask her, how can we make this into a cone that is safe for a dog to wear and looks like this?

“She came back with a brilliant execution, which was to create the cone out of drinking straws. It had the same form and color as a sea urchin and worked perfectly. Marie-Yan designed each cone and created each one based on whatever inspiration I sent her or that we discussed. For example, with Calvin the Komondor (the moppy looking dog) – we wanted to create a cone that mimic-ed the dog’s fur texture. So my moodboard had different yarn and fuzzy fabric textures on it. We would print out thumbnails of the backgrounds, colors, dogs, and textures to see what work best together. So ultimately the design was something I collaborated on with Marie-Yan, and she did all of the building of the cones.”

We read that you’re a dog owner too. Did your dogs make a cameo in the series?
“I have a beautiful basset hound named Clementine – she’s a rescue. She was a puppy mill mom in Ohio. The mill was shut down, and she ended up in foster care with Tri State Basset Rescue, where I found her. I fostered her for a week and then adopted her, she was just too squishy and lovable. Huge foster fail.

“Clementine helped out with our Kickstarter campaign (she has a cameo at the end of the video), but as much as I love her, she is just too nervous and skittish around movement and therefore would hate a studio photo shoot. I think if I can set up a special shoot for her one day in my house it would work, but she is not super comfortable in new environments with noise and movement so for now, she is a Cone of Shame supporter, but not a model yet!”

Do you plan to make a cat version of this too? Please say yes.
“Ha! I love that idea. I’ll think about it… only if it involves meeting a Maine Coon!” 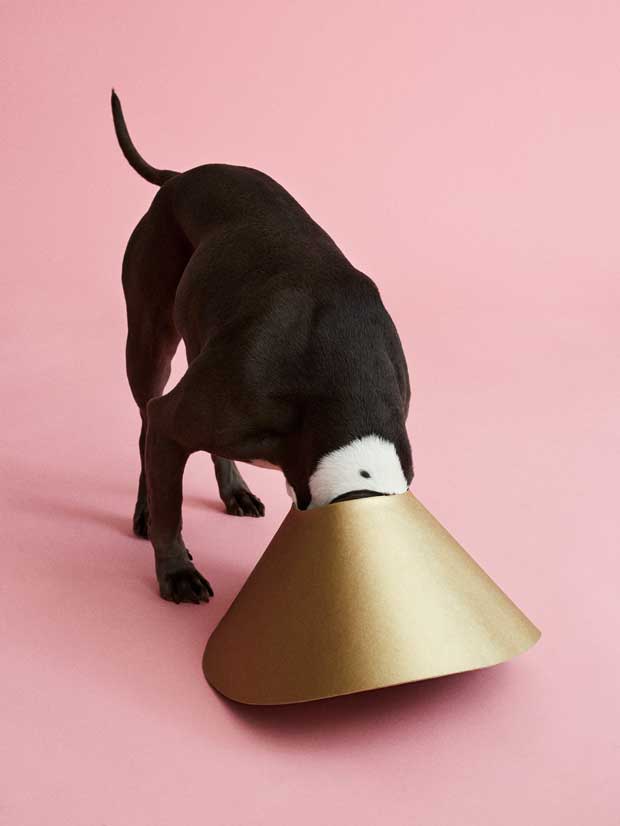 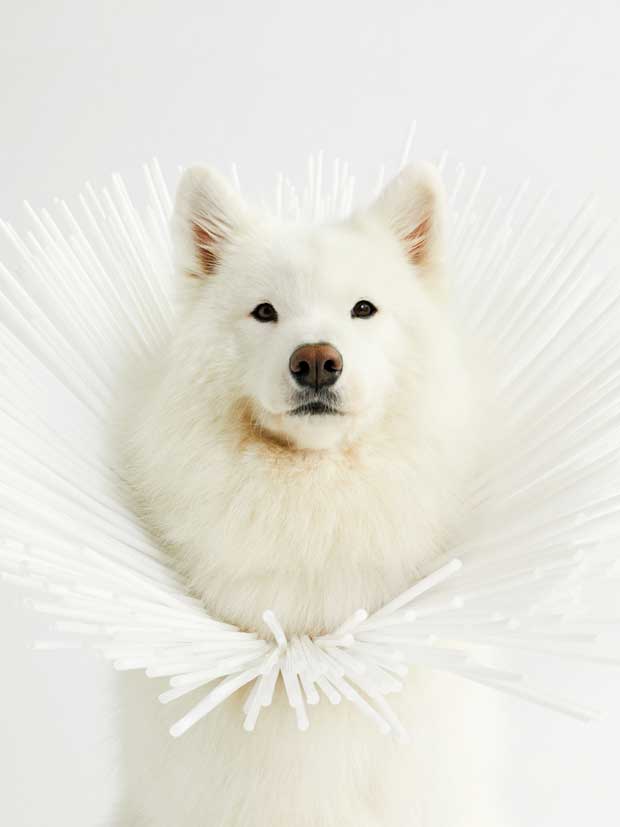