Photos of 65 Iconic Artists In Their Bathtubs 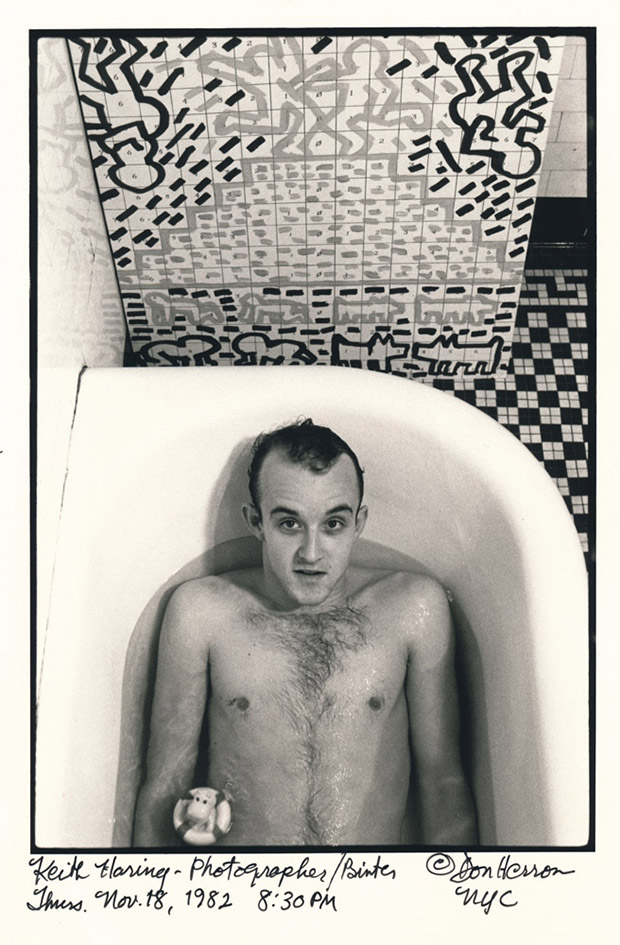 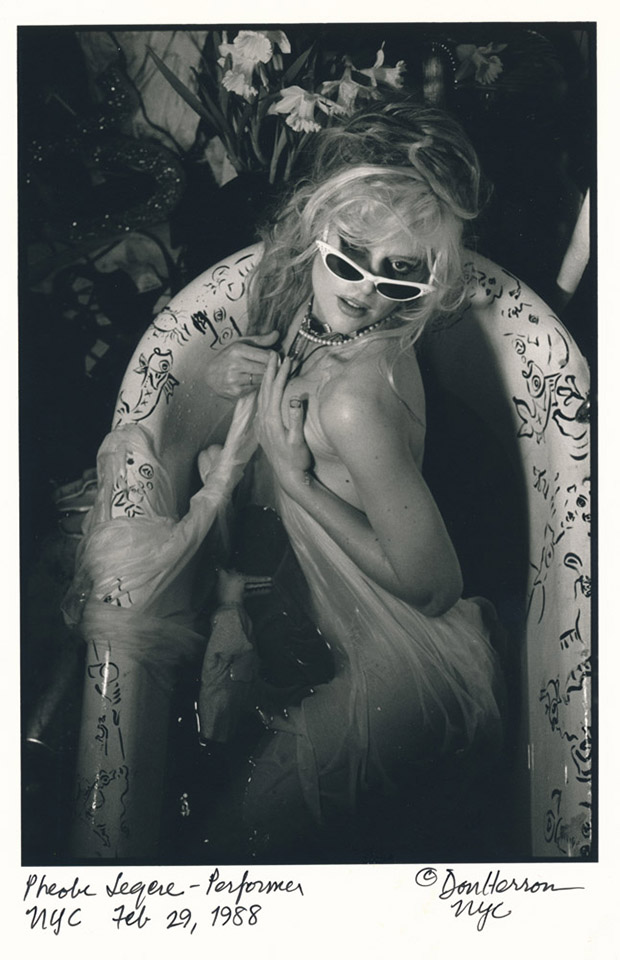 The East Village, 1988: Phoebe Legere was preparing to pose in her bathtub for photographer Don Herron. The 25-year-old songwriter had signed to Epic Records—one of the most powerful in the world back then—and they poised to make her into some combination of Madonna, Barbra Streisand, and Liberace. At the same time, Legere says, Michael Jackson had reached huge commercial success, Cindy Lauper was past her prime, and few female singers or artists were depicted as strong or powerful figures in stardom. Not to mention there was a booming yet wholly male-dominated art renaissance emerging quite literally around the corner in New York, according to Legere. Even Keith Haring was showing at the now-iconic FUN Gallery just half a block away from Legere’s apartment, where she still resides today. “It was a boys club, no question about it,” Legere tells me. “Girls were not welcome, except as maybe a muse or a drug dealer.”

A few days before her photo shoot with Herron, however, Legere had an idea. The up-and-coming musician could use the session to reveal another one of her talents: painting. Using black bathtub glaze, she adorned her bathtub in paintings of fish—which she calls her “totem animal”—and voluptuous women. She didn’t think her beauty alone was enough to would hold anyone’s attention. By the time Herron arrived, after he climbed 80 stairs to Legere’s fifth floor walk up, the paint on the tub had not yet dried and the water had turned black.

According to Legere, Herron’s process as a photographer was one of compassion and intimacy. “If you look at the photo you’ll notice I’m quite shy,” she tells me. “I held up a sheet from my bed and I’m turning away from the camera. I was crippled by my own shyness and even put glasses on to sort of cover my face.” Legere adds that she is grateful that Herron captured this moment in her career—the moment in which she was beginning to emerge from her chrysalis, she says.

This story is just one of almost 100 ‘Tub Shots’ taken by Herron from 1978 to 1993 showcasing black and white portraits of underground luminaries in their bathtubs. From emerging musicians like Phoebe Legere to iconic figures like Keith Haring or Ethyl Eichenberger, Herron collaborated freely with his subjects to construct each set. Some simply sat in their bathtubs; others played games, wore costumes, or exposed themselves freely. Collectively, this series paints a picture of the complex landscape of the New York bohemian creative community in the 1980s, from the art renaissance in the Lower East Side to the AIDs epidemic sweeping the city.

“I decided to do a series of photographs of people in containers,” Herron stated simply to The Village Voice in 1980. “The bathtub was the logical container to use. I started with friends and it grew from there.”

In 2012, Herron passed away near his home in Newburgh, NY. Over the years, images from this series have been published in New York Magazine, The Village Voice, and Art Forum. From Sept. 13 to Nov. 3, a selection of 65 vintage ‘Tub Shots’ will be exhibited at Daniel Cooney Fine Art in Chelsea, New York. On Sept. 29, the gallery will host a panel discussion about Herron’s work and living and making art in the 1980s, moderated by Sur Rodney (Sur) with Jon Kelly, Phoebe Legere, and Agosto Machado.

“Although this series only shows one generation of a long history of creative people living in New York—and a little bit of San Francisco—people can get a look into the backgrounds of their predecessors,” says Gallerist and Curator Daniel Cooney. “This is a large body of work that covers an important time in cultural development.”

Charles Busch, another one of Herron’s subjects, tells me about his experience with the photographer. It was 1987 and he had struggled for almost a decade to make it as an actor and playwright. He spent most of his twenties as a solo performer, doing dramatic monologues, and figuring out how to break through. But when he stepped into the Limbo Lounge—a funky art gallery quasi-performance space on the Lower East Side—things started to change. He was performing in a new Off-Broadway show called Vampire Lesbians of Sodom. The show was an overnight success. It was also the first time Busch wore drag, which he considers an early peak in his career.

He recalls: “I was still living in a very crummy apartment on West 12th Street. The bathroom was dingy no matter what you did to it, but I think the picture looks rather grand. I’m kind of an amateur art director, so I moved a potted palm tree into the bathroom to dress it up. Then I got in. Don was delightful. And it was kind of sexy. After we finished the sixth close up he climbed in the tub with me. Since I had been doing so much drag, it was very appealing for me to photographed as a boy in a somewhat more sexualized way.”

This “early peak,” as Busch describes it, is another key element of Herron’s ‘Tub Shots.’ More than just capturing the camp, the joy, and the tragedy of New York’s creative community during this era, many of these images showcase his subjects at a time when they were just beginning to taste success—they reveal the passion and wonder people radiate when finding new hope after years of deep struggle.

“Even my deep-rooted pessimism couldn’t spoil the feeling that everything was working out in my life…a wonderfully exciting moment of new found confidence and great hope for the future,” Busch writes about his portrait.

It’s hard not wonder how this series would look if Herron continued his work today. Cultural landmarks of the East Village have undergone commercial renovations. Tourists take selfies on every corner. Urban Outfitters sells tee-shirts for 50 bucks. Would it have been possible for Herron to continue his ‘Tub Shots’ in our modern version of New York City?

“I think he would still be connecting to creative souls, who are still very active in New York even if the location is different,” says Cooney. “A lot of people try to say ‘artists can’t survive in New York anymore,’ but I know a lot of young artists and performers who do.”

Thirty years later, creative people trying to make it in New York are living different narratives in a familiar story. The East Village has become Bushwick. The Avant Garde is now hipster. The AIDS epidemic gave way to the Opioid Crisis. Female artists are still fighting for representation equal to that of their male counterparts. And Phoebe Legere’s bathtub was never repainted.

Maybe the struggle, the passion, and the idiosyncrasies of New York’s creative class will never wither. Maybe the culture will evolve but never truly change. And maybe soaring rent prices will someday drive artists out of Brooklyn.

But if one thing is certain, it’s that the work of Don Herron continues to give artists hope for the future. 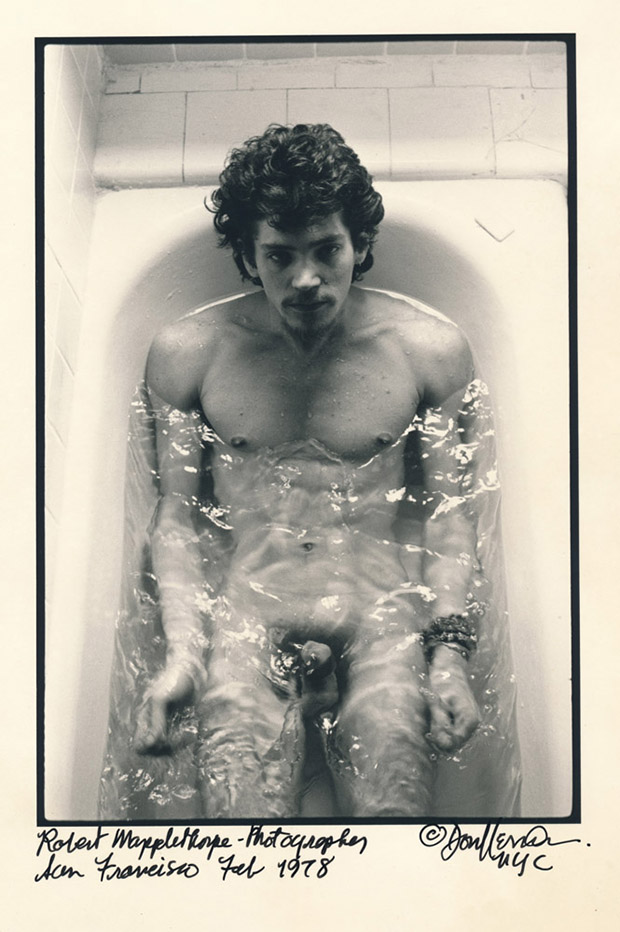 Robert Mapplethorpe, 1978. “I was to photograph Robert at 3pm in his hotel room, but at 3 Robert wasn’t in his room, so I waited in the lobby. At 3:15 he walked in and apologized: he had forgotten all about the shoot and was just getting in. As I photographed him in his bathtub he kept saying that he couldn’t remember much about his opening the night before, or much about our conversation at the gallery, but if I was willing to photograph him in his current condition, he was willing to pose. I took 18 shots and they all look exactly alike, he just lay in the tub and occasionally blinked.” – extracted from a letter from Herron to a friend. Mapplethorpe (1946-1989) died of AIDS at the age of 42. Photo © Don Herron, courtesy Estate of Don Herron and Daniel Cooney Fine Art 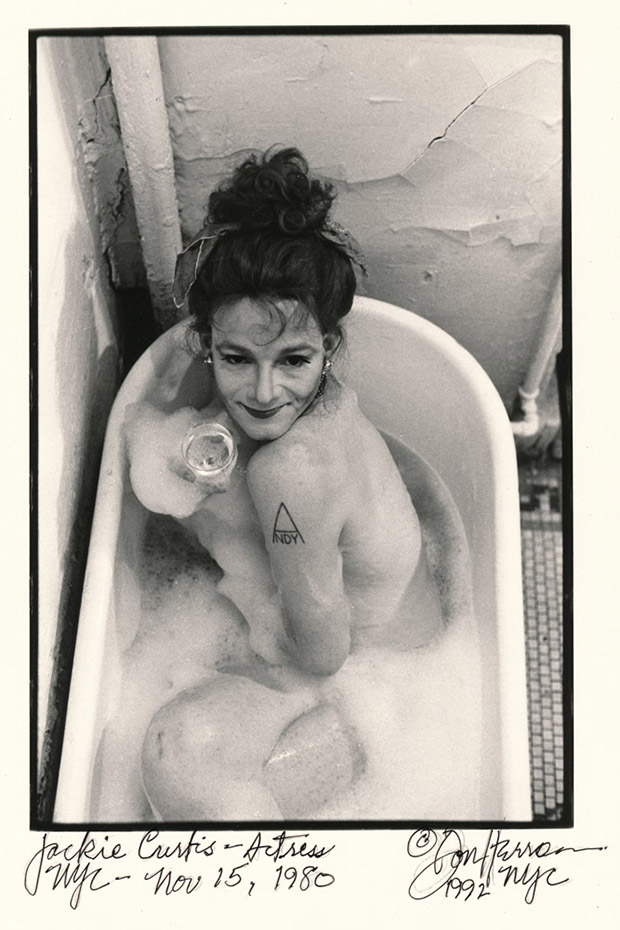 Jackie Curtis, 1980. Jackie Curtis (1947-1985) was a playwright, director and performer known as one of Warhol’s Superstars. Curtis came to prominence at The Factory along side Holly Woodlawn and Candy Darling. Curtis died of a heroin overdose in 1985 at the age of 38. Photo © Don Herron, courtesy Estate of Don Herron and Daniel Cooney Fine Art 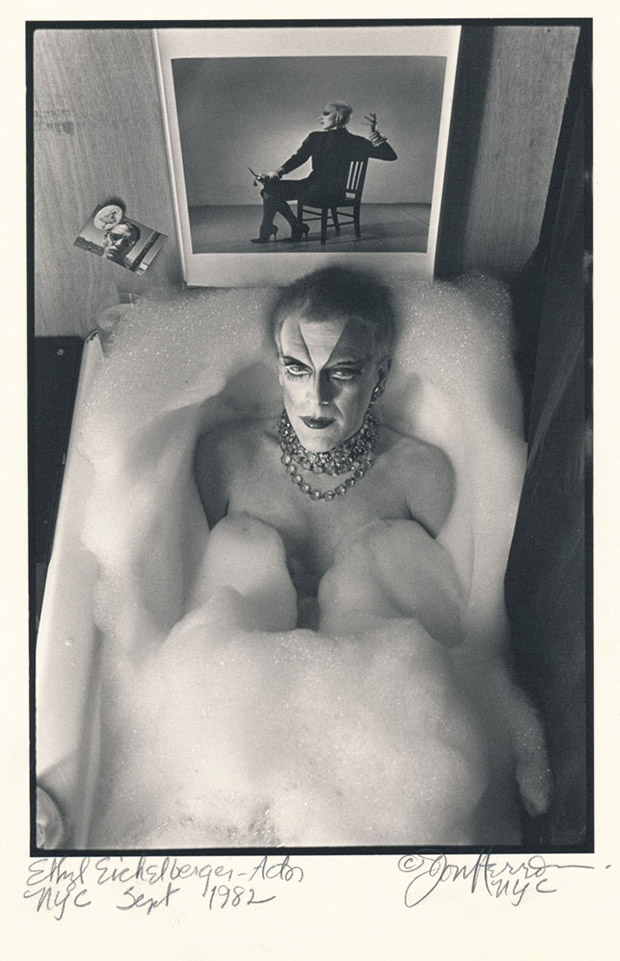 Ethyl Eichelberger, 1982. Ethyl Eichelberger (1945-1990) is seen here with his 1981 portrait by Peter Hujar. Eichelberger was a legendary performer on the New York theatrical scene in the late 1970’s and 80’s. He was best known for his many roles and various wig designs for the Ridiculous Theatrical Company. In 1990 Eichelberger was diagnosed with AIDS. Unable to tolerate the medications he committed suicide at home in Staten Island. He was 45. Photo © Don Herron, courtesy Estate of Don Herron and Daniel Cooney Fine Art 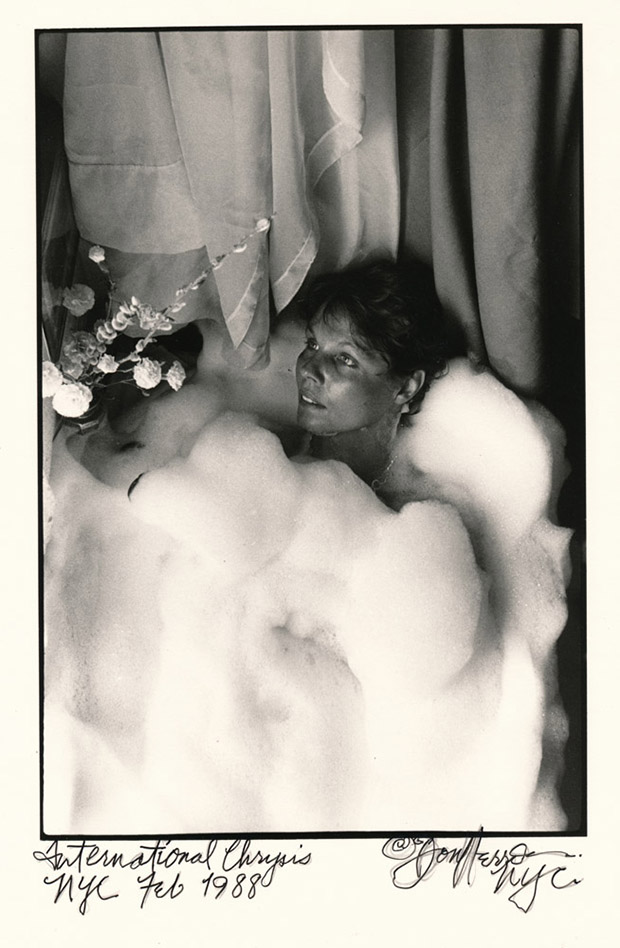 International Chrysis, 1988. International Chrysis (1951-1990) was a transgender performer who had long red hair and an engaging smile. Friends compared her to Rita Hayworth and some say she more closely resembled a plump Raquel Welch. Chrysis’s breasts, which she christened Johnson and Johnson, helped bring about her death in 1990 at the age of 39. They were injected with wax that hardened into painful lumps and eventually seeped into her bloodstream. Along with her unregulated use of female hormones, that seepage contributed to a fatal case of liver cancer. Photo © Don Herron, courtesy Estate of Don Herron and Daniel Cooney Fine Art 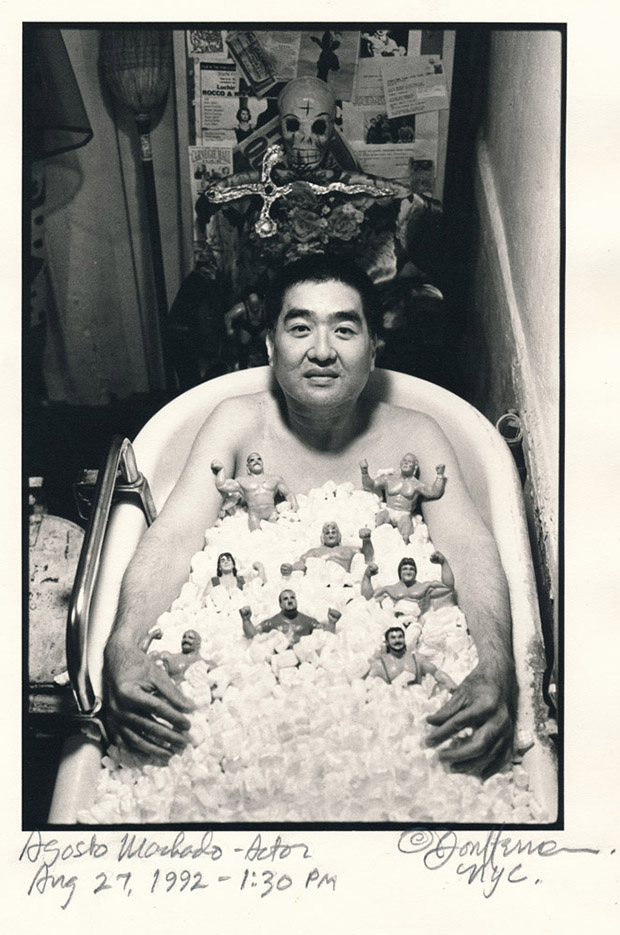 Agosto Machado, 1992. “Don was so generous. He told me to present myself in the way I wanted to be remembered. I chose to cover myself diplomatically ‘above the tits’ with packing peanuts and muscle men figures that are my protectors and my fantasy.” Photo © Don Herron, courtesy Estate of Don Herron and Daniel Cooney Fine Art