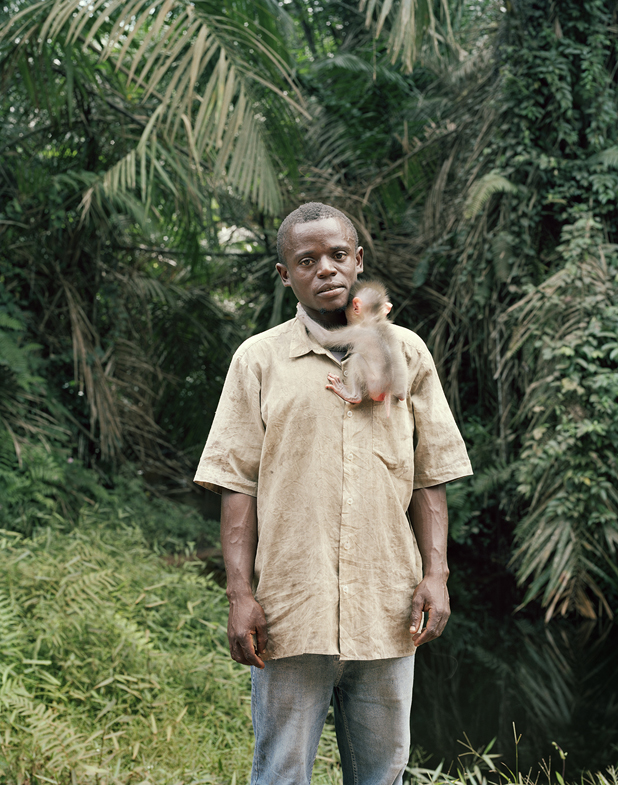 Man with an orphaned monkey 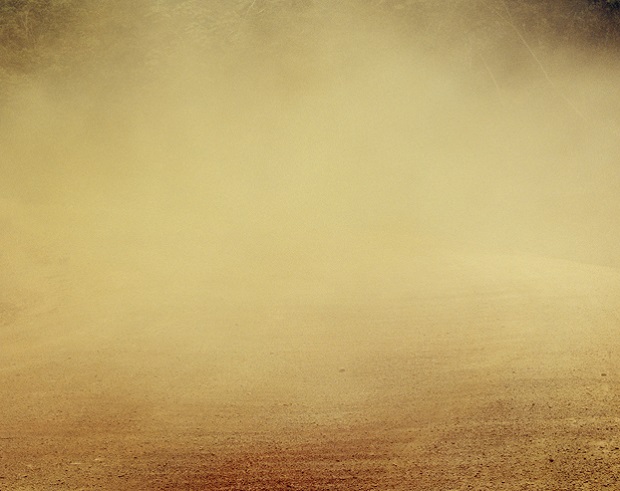 After receiving an invitation to partake in a project, Brooklyn-based photographer Sasha Bezzubov suddenly found himself deep in the rainforest of one of the world’s most precious ecosystems in the Republic of Gabon, photographing the odd and unexpected mix of people inhabiting the place.

Faced with a flurry of ethical dilemmas and walking head-on with his camera into dust storms churned up by passing trucks on the logging roads that weave through the jungle interior, Bezzubov has emerged with Republic of Dust, a project he admits is very different from the one he set out to do. In these images, where apparitions of dust fill Bezzubov’s large-format frame, he draws a portrait of the forest’s arresting beauty and its inevitable destruction.

How did you find out about this place, and what motivated you to do a project based upon it? Had you visited the place before you started this project?
“I had hardly ever heard of The Republic of Gabon in Central Africa until I received an invitation by this strange and interesting man, named Josh. Josh is a filmmaker, National Geographic Explorer and, in general, a sort of Conradian character. On behalf of the first lady of Gabon’s foundation, Josh invited me and five other photographers to each create a project that would coincide with 50th anniversary of Gabon’s independence.

This was an amazing opportunity, but I knew right from the start that it would be problematic. First off, all of the organizers and artists, including the first lady, were white and of European descent. This felt strange given that Gabon has a predominantly black population, as does the rest of the continent. Even before I got there, I had a sense that I was stepping into some troubling neo-colonial territory. I had worked on a number of projects in the developing world in the past. I’ve always been aware of the troubled history of representing “the other”, especially through photography, and my projects were, in one way or another, a critique of that trope. The long and the short of it is that I didn’t want to pass up this chance to work on a fully-funded project in Africa, but I realized all along, and even more so now, how compromised the project was from its conception. And that was just the beginning.” 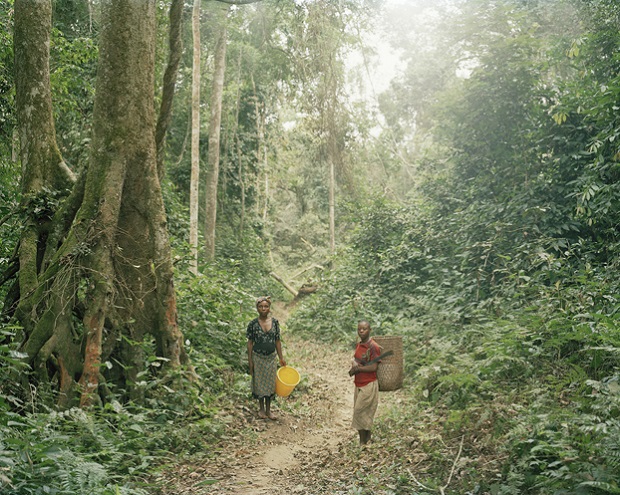 Pygmy women on the way to fish in the river 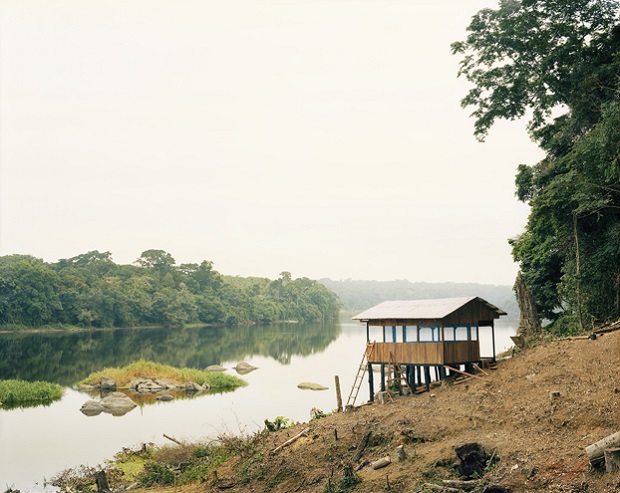 How were you welcomed as a photographer – were people generally open to you photographing them?
“When I make portraits I have a simple rule, which is never to pay my subjects. It’s a very convenient rule, that also happens to be very affordable. Instead, I try to involve my subjects in the project, letting them know what I’m doing and why, with the hope this dialogue will result in trust and engagement. At the very least, it’s voluntary and consensual.

As it turned out, my experience in Gabon was radically different. Upon arrival, I was handed a very large envelope full of cash. It was explained to me that payment for photography would be expected in Gabon by almost everyone. This made me extremely uncomfortable, went against my rule and better judgment, but I went along with it, not knowing what else to do. And that, in itself, was another deeply problematic aspect of the commission — in spite of having spent a year researching this country, I was pretty ignorant of this place, it’s people, customs and subtle social dynamics.

Our arrival in a typical village was met with a mixture of suspicion and excitement. Almost everywhere a meeting was held, at which the entire village was present, and a deal was struck between my guide and the chief of the village. My guide offered a certain amount of soap, wine and money – and so began a set of negotiations, haggling and arguing in a mixture of Fang and French between my guide and the chief. Before long, the entire village would participate in these negotiations. Being both an outsider and instigator in all this was super strange. A typical negotiation would last a couple of hours, but at the end a deal was struck and we could photograph almost anyone. For reasons I never understood, there were always people who refused to have anything to do with us and would make themselves scarce.” 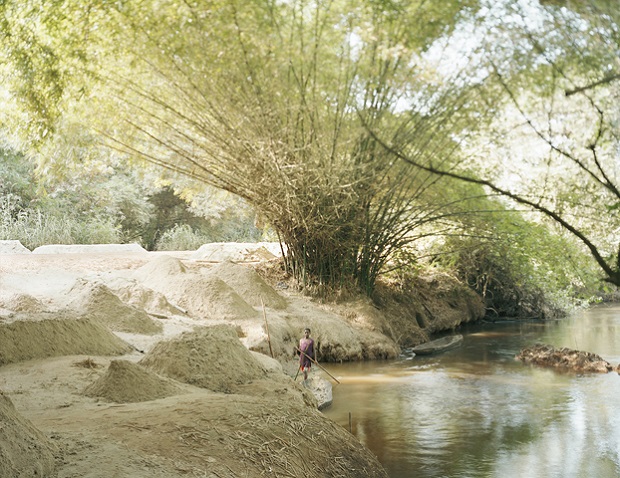 Boy gathering sand from the river-bank 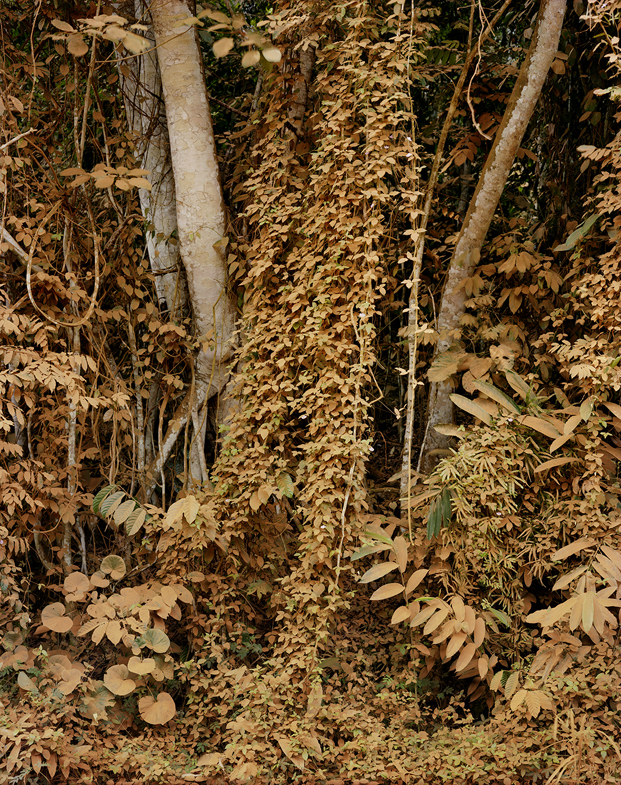 You mention there are a lot of tensions between the tourists and locals, can you explain the basis of this tension?
“The rain forest in Gabon where the Republic of Dust was made, is home to a number of groups and interests that co-exist, sometimes with great tension. These groups include Gabonese villagers, the indigenous Pygmies, and migrants from neighboring countries in Africa. They also include people from Europe and North America working in extraction industries as well as scientists, environmentalists and plain old ex-pats. Then there are Chinese and East Asian firms and their employees, building roads and extracting everything from rubber, to manganese, to immense trees for world markets. There are farmers, hunters and poachers, national park police and last but not least, a trickle of tourists. Some tourists come to take part in traditional ceremonies that involve eating Iboga, one of the most potent hallucinogenic roots, and spent weeks in a kind of trance while undergoing various purification rites performed by local medicine men. All these people have different ideas about what’s right for the forest, and these ideas sometimes clash.

“It was really surprising to learn that such an out of the way place, so remote and under the radar (at least to most Americans), is in a way a center for all these disparate geographies, agendas and peoples coming together – a microcosm of globalization.” 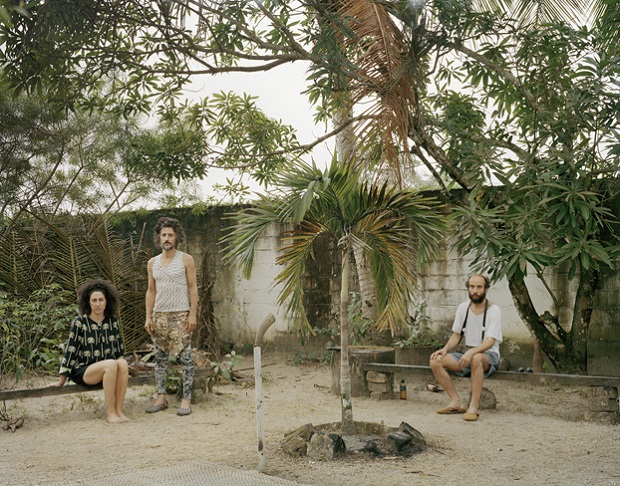 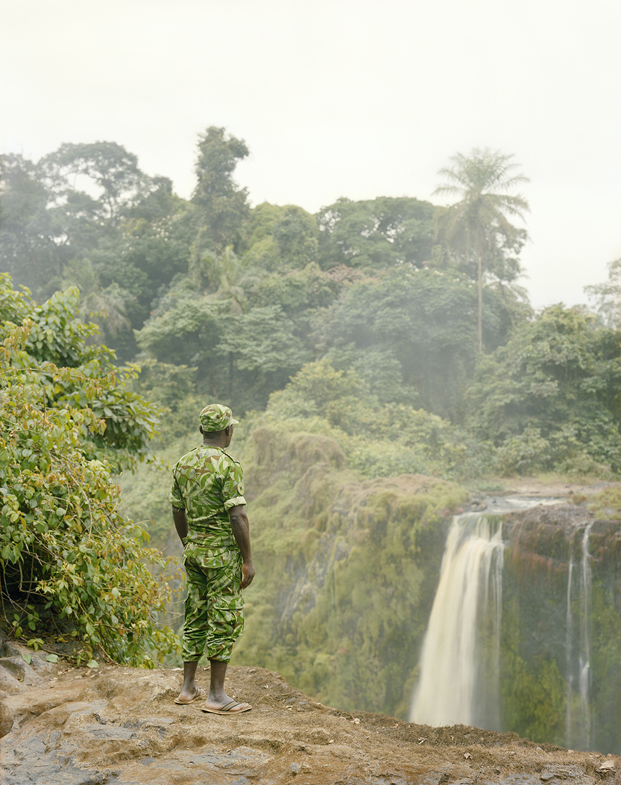 Why is there so much dust and what is the significance of it in your images?
“Gabon is a country the size of England with a tiny population of 1.5 million people, half of which live in its capital, Libreville. The majority of the country – some 85% – is a thinly inhabited rain forest. The only way to get anywhere in the country is to drive through the rain forest along one of the dirt logging roads that snake through it and connect the country’s towns and villages. These roads are primarily used by trucks involved in extraction industries – from timber to rubber to metals of all sorts. Each truck that drives by deposits a layer of fine African soil on the otherwise lush green forest. So the forest you see when you stand in the middle of the road is completely covered with dust.

I made two types of dust pictures for this project. The first kind is a still life made with an 8×10 camera and printed very large, where every leaf is precisely rendered. It was important in these works that scale approaches life scale, so that the viewer can experience the dust-covered forest not as a picture, but as an environment. The second approach involved jumping into the middle of the road immediately after a logging truck and photographing the cloud of dust in its wake. These were done with a medium format hand-held camera.

In these photographs, the rain forest, no longer pristine but covered with a layer of dust, is both fact and symbol. The dust covering the forest, although very specific in this case, simultaneously represents for me the destruction of natural environments and habitats in other parts of the world through other means.” 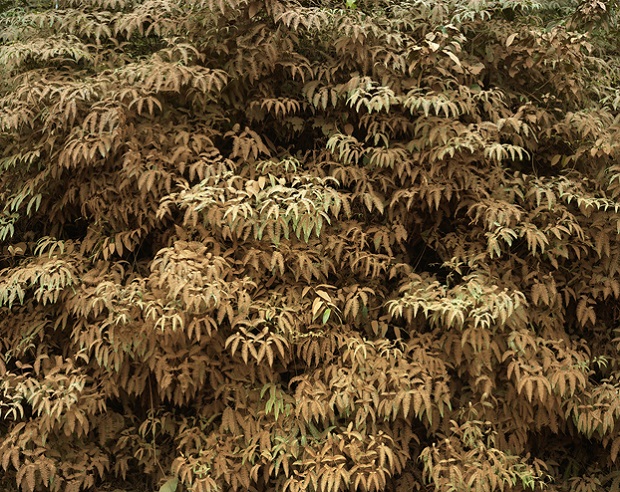 Can you describe for us the overall environment in the National Park – what is the future for this rainforest do you think?
“Gabon’s National Park system was established in 2002 by the former president Omar Bongo. There are 13 National parks now, covering 10% of the country. That’s an enormous commitment to preservation. I only went to Ivindo National Park, saw one elephant and a lot of elephant poop. It was beautiful. Yet, the parks are difficult and costly to reach. The government has been trying to develop an eco-tourism industry, but poor road infrastructure and the ridiculously high cost of travel in Gabon are obstacles in a competitive tourism market. Being beyond the budget of most tourists, it’s hard to imagine how the National Parks can generate sufficient income to maintain conservation. The parks seem to be more of an aspiration rather than a successful wildlife management plan that takes into consideration the needs of the local population, as well as the environment.

Outside of the parks, I saw a lot of mining and logging in unprotected rain forest. The reason I ended up working on The Republic of Dust is that this pristine and incredibly rich rain forest, along with its inhabitants, feels so imperiled. The forces of profit are really strong and if the only means to profit from the rain forest remains destructive – there’s only so much of it a forest can bear before it’s completely buried under a layer of dust.”