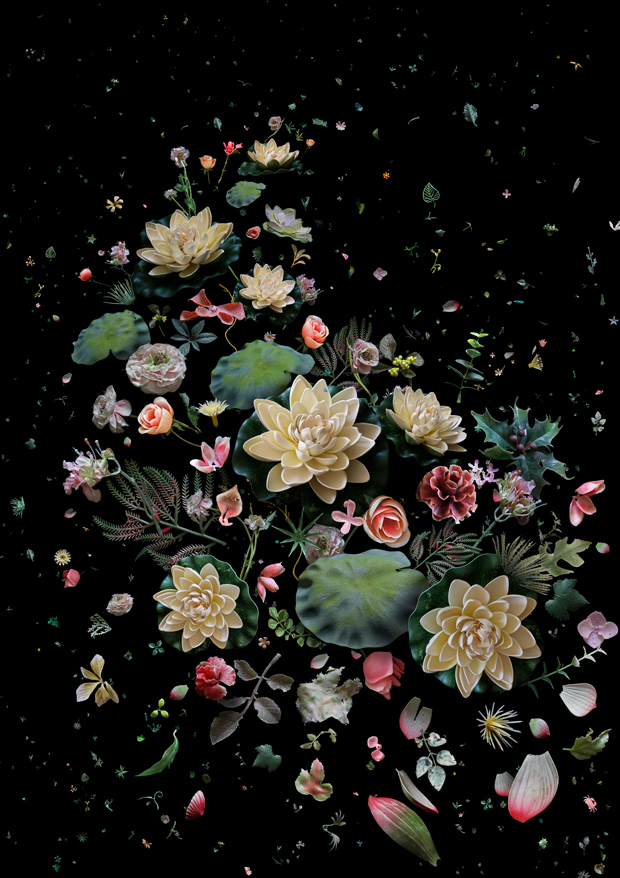 A collection of different species of discarded artificial flowers that would not exist at the same flowering time in nature and should not be found in the ocean. The lotus flower reflects early connotations of beauty in China. The flowers are part of a collection recovered from various beaches over the past 3 years.

“Photography is not what we see; it’s what we make others see,” says Leeds-based photographer Mandy Barker.

In 2012, Mandy Barker set sail on a yacht to partake in a month long research trip across the North Pacific Ocean. During the voyage, she collected waste from thirty different beaches in Hong Kong. Although her work focuses exclusively on marine plastic waste, nothing prepared her for the sights she witnessed on the voyage. Condoms, ice lolly packets, syringes, antibiotic IV bags, and dolls were among the infinite array of plastics washed ashore on Hong Kong’s islands.

When she noticed how quickly people lost interest in her images of rubbish, Barker realized that she had to do something to hook and reel-in the attention of her viewers. Photographed against black backdrops, Barker has grouped waste items recovered from the ocean and displayed them in beautiful mesmerizing forms, which contradict sharply with the disturbing content of the images.

Composition plays an important role in her series – lighters are arranged in the form of a dolphin pod; in ‘Lotus Garden’ flowers are positioned in a way that they could be mistaken for a traditional Chinese oil painting, but are in fact a collection of artificial flowers found in the ocean. On closer inspection, the reality surfaces and entire galaxies of waste come to light.

“My goal,” says Barker, “is to make the public aware of facts concerning the detrimental effects of marine plastic. I hope by presenting this issue in an accessible way, it will bring the problem to the attention of a wider audience and in some way help inspire change.” 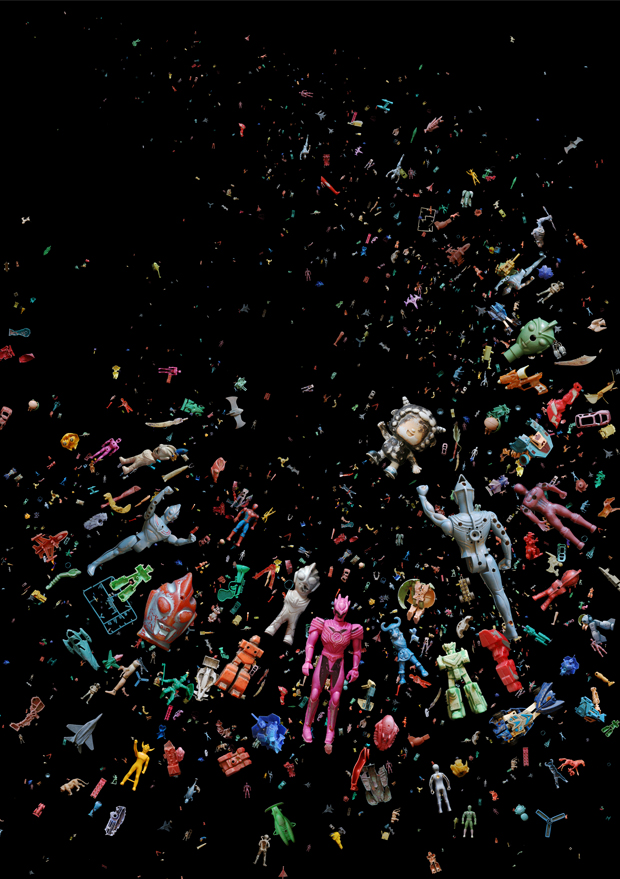 Recovered transformers and action figures reflect the inadequate disposal of children’s plastic toys. This group sends the message to TRANSFORM the habits and behavior of the younger generation in Hong Kong, with the emphasis being to take ACTION. Part of a collection recovered from various beaches over the past 3 years. 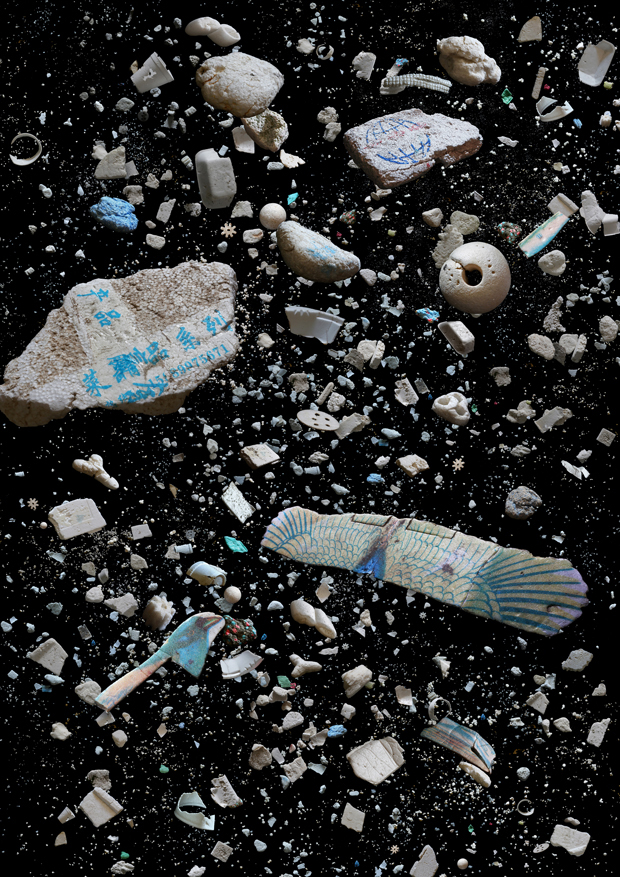 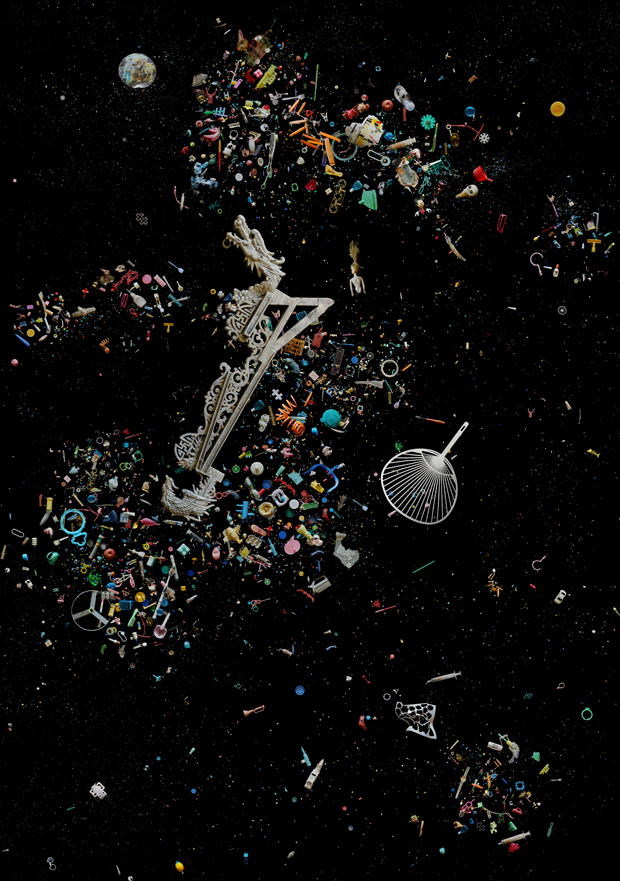 What motivated you to start this series?
In 2012 I was awarded The Royal Photographic Society’s Environmental Bursary that enabled me to take part in the Japanese Tsunami Debris Field Expedition. The opportunity involved working alongside scientists and educators on a month long research trip aboard a yacht sailing across the Pacific Ocean. During the trip, each crew member gave a presentation of their work and one of the team (Tracey Read from the charity organization Plastic Free Seas in Hong Kong) showed their relentless efforts to clean up the plastic-covered beaches in Hong Kong. The amount of debris was on a scale I had never seen before; I knew there and then that this would be my next project. After the trip I was invited to Hong Kong to speak at a conference and it was during this time I collected most of the debris for the series.

Also my motivation came from the fact that it is estimated that 8.8 million tonnes of plastic debris enters the oceans every year, and 2.4 million tonnes of that comes from China, so this was a part of the world that I wanted to focus on.

Where did you collect the waste for your images?
“I collected the plastic from over 30 different beaches in Hong Kong. In some cases, I could have collected what was needed in a single afternoon and from one beach, but I wanted to represent the fact that plastic debris exists on every beach in Hong Kong and over a wide ranging area.”

How did you create the images?
“To make the images I scattered the recovered, unwashed and unaltered plastic onto a black background to reflect how the debris was found randomly in the ocean and on the shoreline. I took images of the different sizes of plastic, from the smaller particles to the larger pieces and then sandwiched them together. The amount of layers varies with each image, usually from between 2 to 8. The objects are lit with natural light and from one direction to represent the light shining down from the sea’s surface.”

Is there anything being done currently to combat the waste problem in Hong Kong?
“Yes – the Plastic Free Sea organisation in Hong Kong is doing an amazing job in creating awareness, organizing beach cleans and connecting with the younger generation of Hong Kong about changing habits at school and in the home about the consumption of plastic and the consequences. They also teach classes aboard their floating sea classroom.”

Did you learn anything new while working on this project?
“I learnt about the problems of waste disposal in Hong Kong and that their 3 landfill sites will reach capacity before the end of the decade, so something has to be done to engage with the consumer habits of Hong Kong’s people. The title of my series, ‘Hong Kong Soup:1826’ is based on facts from The Environmental Protection Department, Hong Kong – Waste Statistics for 2012, which showed that 1,826 tonnes of plastic waste goes into landfill EVERY DAY in Hong Kong. Also the image ‘Hong Kong Soup: Polystyrene’ is based on the same statistics, which detail that 52 tonnes of polystyrene (styrofoam) dining ware goes into landfill in Hong Kong EVERY DAY.” 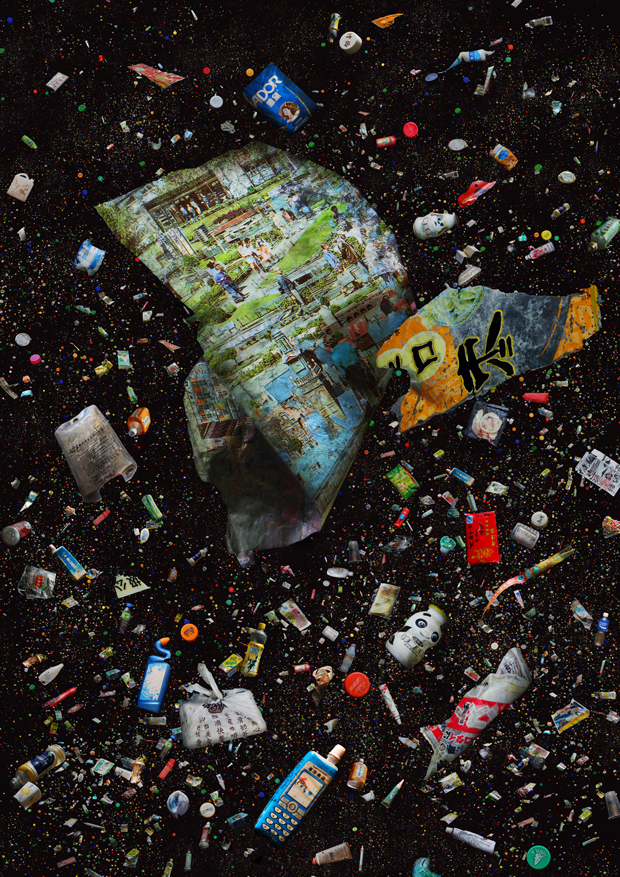 Plastic packaging from household products mixes with medical and hazardous waste. Take-away food packaging lies next to a bottle of bleach and a confectionery phone packet implies communication in the need for change. Includes: bottles & tops, gift-wrap from Shenzhen miniature village, condoms and an IV antibiotic bag. Recovered from Tsing Lung Tau and Port Shelter Beach. 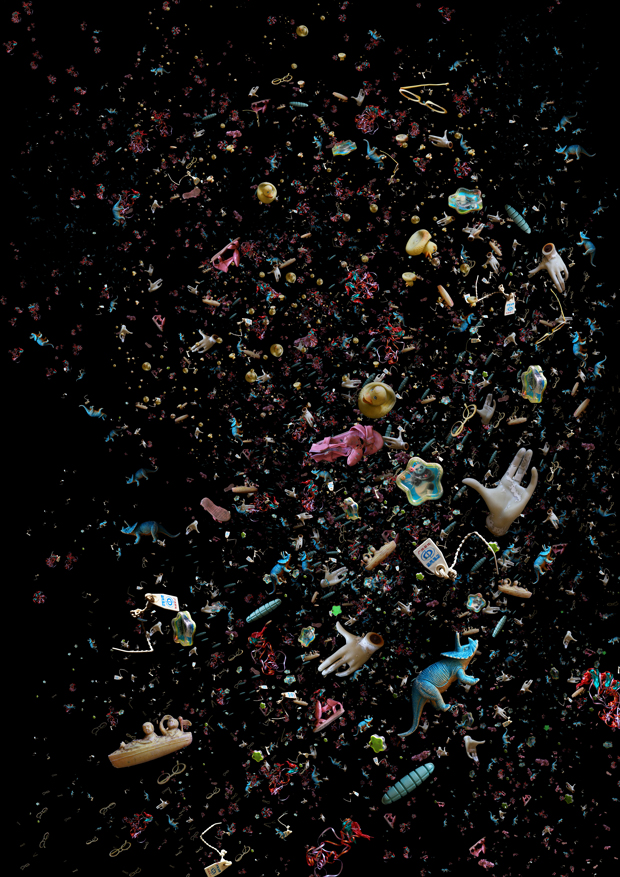 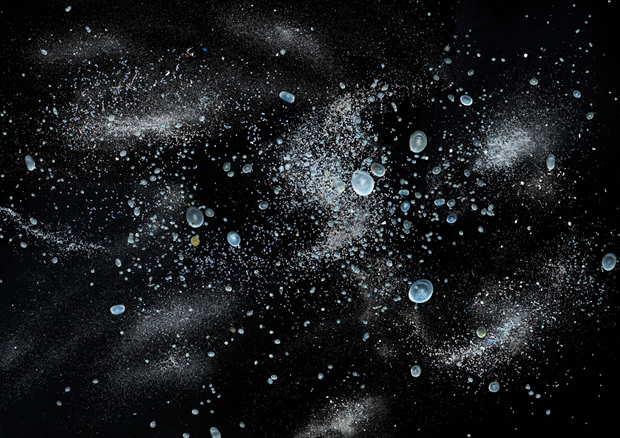 Representing 150 tonnes of nurdles, (pre-production pellets) spilled from 6 cargo containers during Typhoon Vicente on July 23, 2012, adding to Hong Kong’s waste issues in its sea’s and on its beaches. The image mirrors the night sky on the day of the spillage and depicts a collection recovered from six of the worst affected beaches soon after the incident. 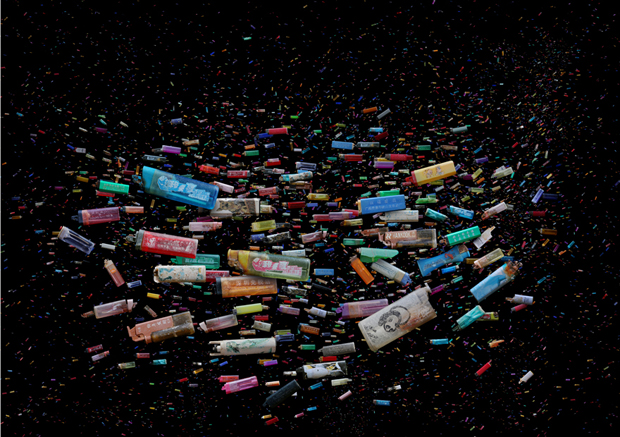 Discarded cigarette lighters make reference to our single-use, “Throw Away” society. The Panda motif, an endangered species and national emblem of China, faces away from the group, representing Mother Nature turning its back on man’s inability to take ownership of its waste. This serves as a metaphor for the future and ultimately our own mortality. Recovered in Hong Kong over 3 years. 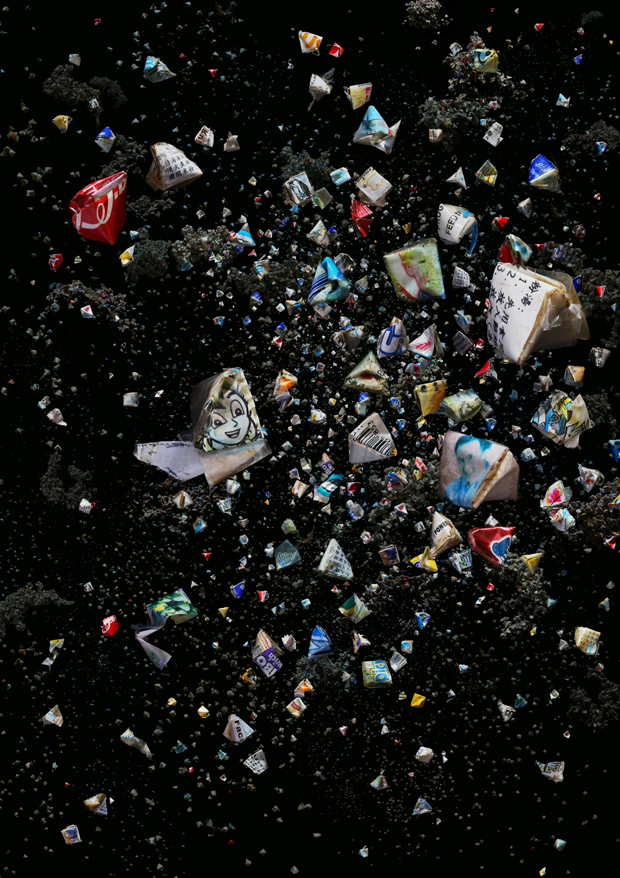 Miniature plastic imitation sticky rice packages found in the sea. Zongzi, or Zong are traditionally made from bamboo leaves and thrown into the sea as part of the Dragon Boat Festival in Hong Kong. Recovered from Tai O beach, Lantau Island. 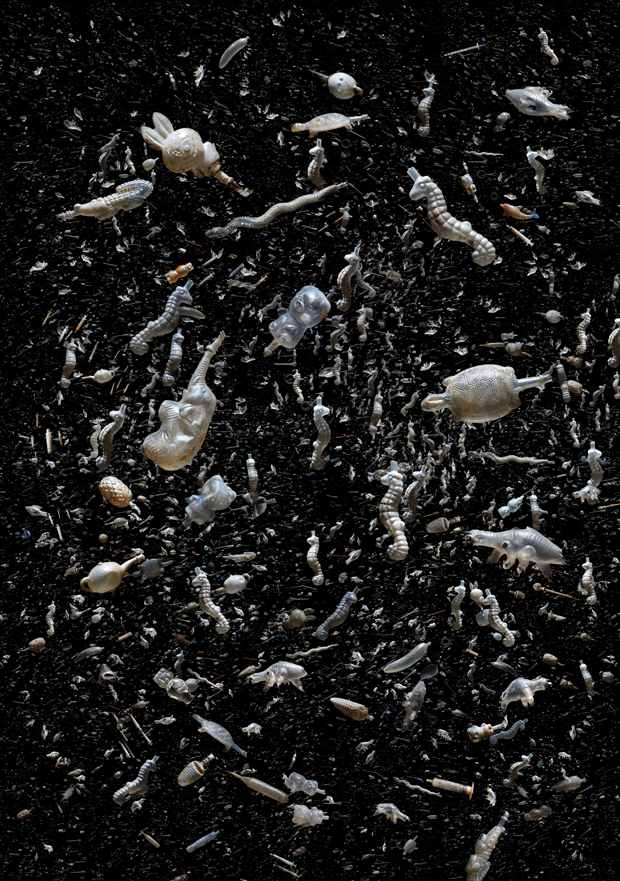