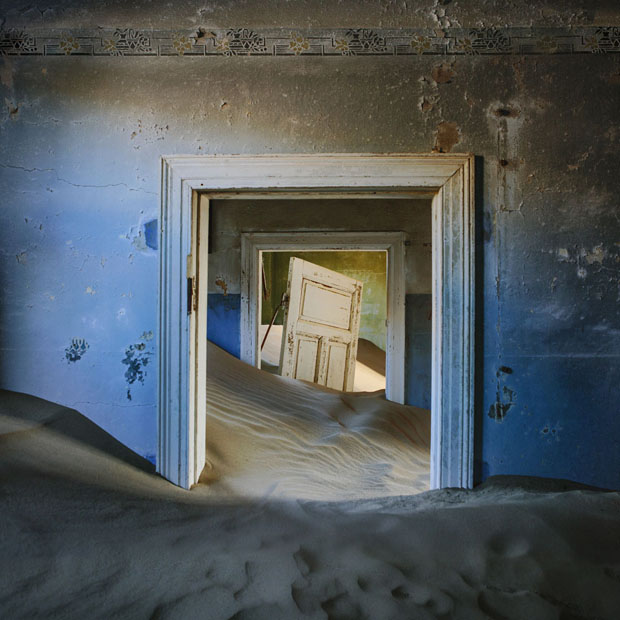 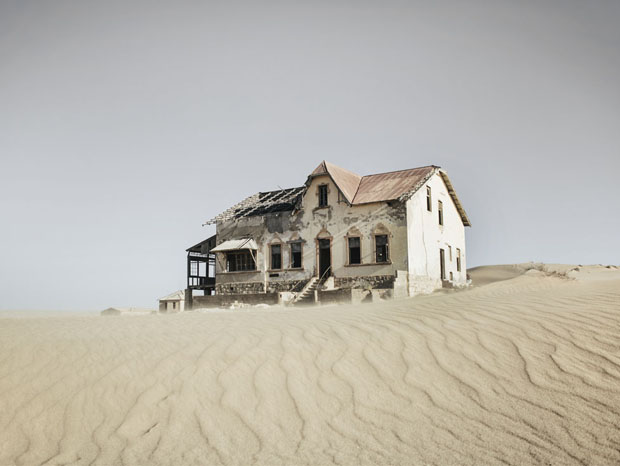 When a glinting stone came into the hands of a railway worker in the Namib Desert of southwest Africa, his supervisor August Staunch instantly recognized it as a diamond and obtained a prospector’s licence for the land. Out of nowhere, a town materialized to accommodate around 1,000 German miners and their families and for decades, Kolmanskop’s inhabitants lived a life of luxury. However when the diamond supply reached exhaustion in the 1950s, the miners packed up their belongings and left, leaving the town to be reclaimed by the desert sand.

Melbourne-based photographer Emma McEvoy recently travelled to Kolmanskop to photograph the eerily beautiful interiors of the leftover houses. Sneaking into the town to avoid the tourists, McEvoy was able to catch the golden light of dusk and dawn which permeates the vacant spaces of her Sand Castles series. Beneath the beauty however, is a reminder of the brutal human tendency to take from earth and move on only when its resources have been drained entirely.

On returning to Melbourne, McEvoy had the idea to exhibit the photos in a rundown house mimicking the empty sand-filled dwellings of Kolmanskop to give her viewers a sense of being transported to the indomitable African desert. 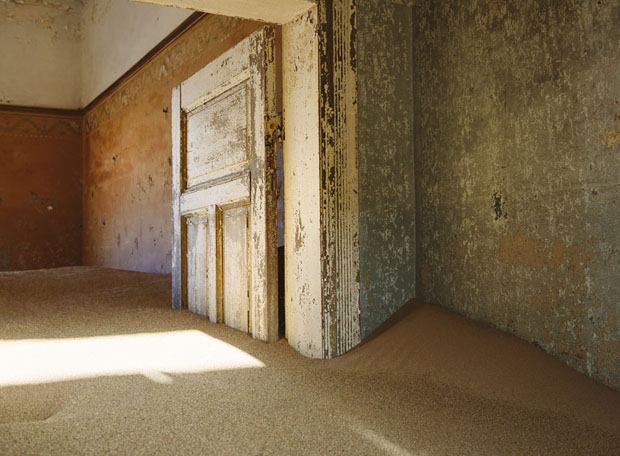 How did you discover Kolmanskop?
“I first came across images of Kolmanskop five to six years ago online in an article about surreal places of the world. As a photographer obsessed by nature and unusual places, it grabbed my attention and was immediately added to the bucket list. I was traveling in Lesotho and South Africa last year and realised Namibia was basically next door, so I decided to make the trek over pretty much just to visit this town and photograph it. Before I arrived, I didn’t know if it would develop into a series or not, but as soon as I stepped foot in there I was so overcome with emotion, I knew I had to do something more with it.

You get there by travelling in a really small plane and you literally land on a tiny runway in the middle of the desert. It’s an amazing place. The place is quite popular with photographers, so I was worried about getting there and the rooms being full of footprints in the sand. Luckily there had been severe wind storms for a few days prior to my arrival so the footprints had all vanished. I was also worried about being surrounded by tourists, as access to Kolmanskop is limited to a few hours in the middle of the day by permit. You can get a photography permit to access it out-of-hours, but the place was closed when I visited, so I had to sneak in to capture the images in the beautiful golden light at dawn and dusk on my own. It was an absolutely magical experience.”

To someone who has never been to this place before, how would you describe it?
“The place is bizarre. This little abandoned town in the middle of the African desert. You feel like you are in the middle of nowhere, even though it’s not too far out from the town of Luderitz. Everything around is so bleak and barren – the outside of the houses are dull and the facades quite unremarkable – but you step inside and the rooms are so colourful and vibrant, each room has a different wallpaper and the German architecture is really beautiful. There are a number of different buildings still accessible and each building has multiple rooms; some rooms are full of more sand than others. You can literally spend hours wandering through the different buildings.” 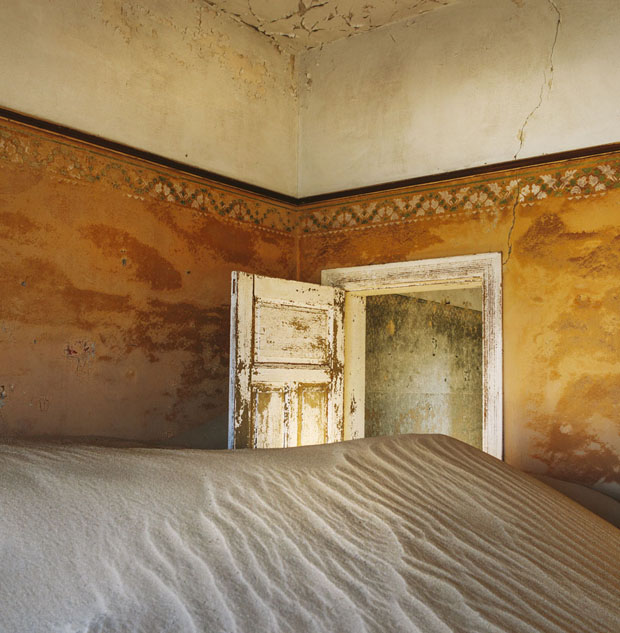 Can you talk us through how you set up the installation?
“I knew finding a house in inner city was always going to be difficult, and it took a while for me to find one. For months I walked the streets of Melbourne dropping notes in letterboxes, putting ads on gumtree, writing to a real estate companies, and I even paid for title information on a number of abandoned properties to try and find out who owned them. I finally found a suitable house but soon realised it was occupied by squatters. It was tough… Then one day I was walking home from work and spotted an old rundown house with a huge sign out the front. I realised it was for a Fitzroy development company (Milieu). I decided to contact them just to ask if they knew of any rundown houses in the area, explained what I wanted it for and showed them my work. I didn’t expect to hear back from them at all, let alone to hear that they had the perfect house and were willing to let me use it! They have been absolutely amazingly generous and supportive of the whole thing!

When I went inside the house for the first time I nearly had a heart attack it was so perfect, so many eerie resemblances of the houses in Namibia. The walls were cracked, peeling and covered in cobwebs, the wallpaper was the perfect colour, the old doors off their hinges, the bathroom a perfect mint green colour, and there was an orange kitchen! It was amazing. I was thinking I would have a lot of work to do to the inside of the house to make it look older and more weathered, but I didn’t have to touch a thing. I just made the decision to paint the exterior of the house a sandy cream colour to make it look more like the outside of the houses in Kolmanskop. It was also a weird act of serendipity to find out that the house was due to be demolished very soon after my exhibition. Having a pop-up exhibition in a house due to be demolished, tied in really well with my whole concept surrounding the impermanence of everything.

The biggest job was getting the sand inside. I used 9 tonnes of sand. Two truckloads, hundreds of wheelbarrow-loads, and a bunch of awesome strong mates and we got it all inside in half a day! I then just left it for a few days to dry out and then got in there with shovels, brooms and a leaf blower to spread the sand throughout the house and build it all up the walls. I then hung my framed photographic pieces throughout the 4 rooms and hallway, so people were able to walk throughout the entire house. It was amazing.” 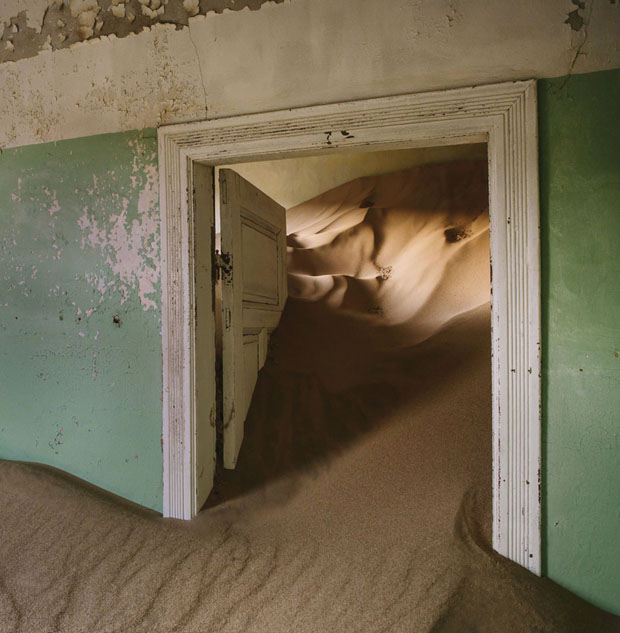 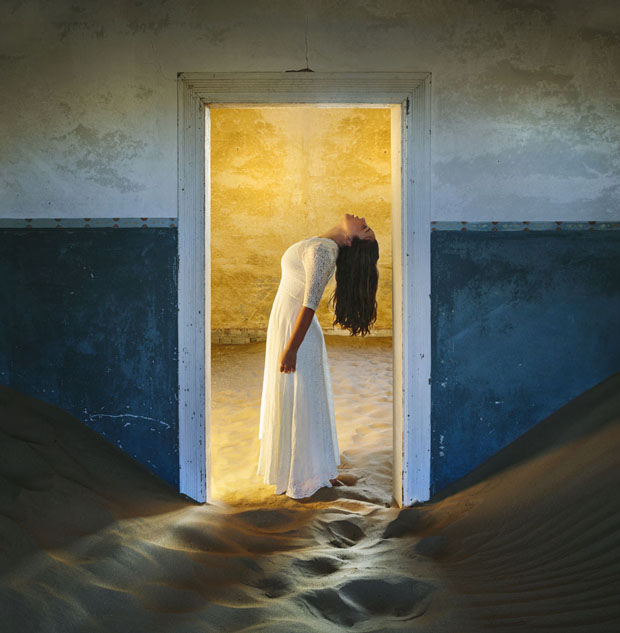 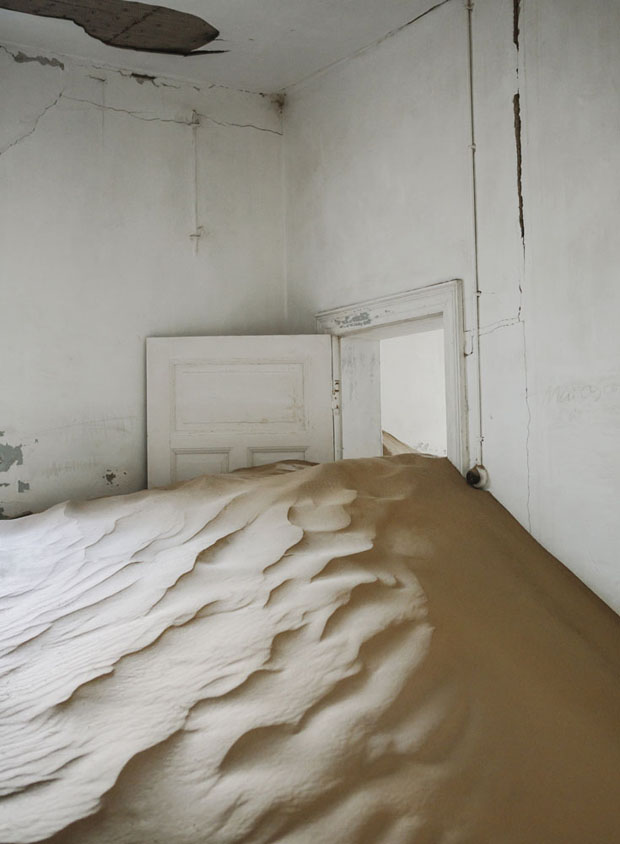 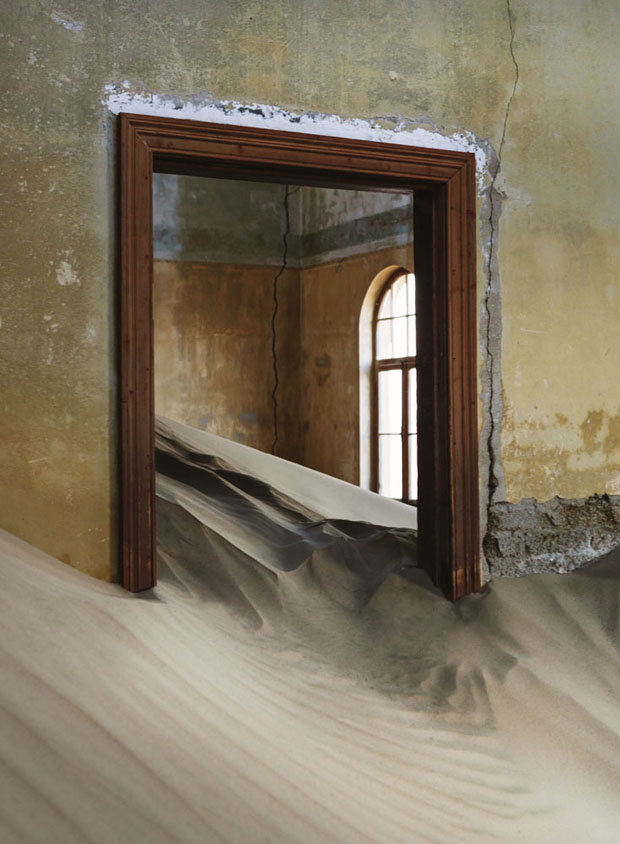 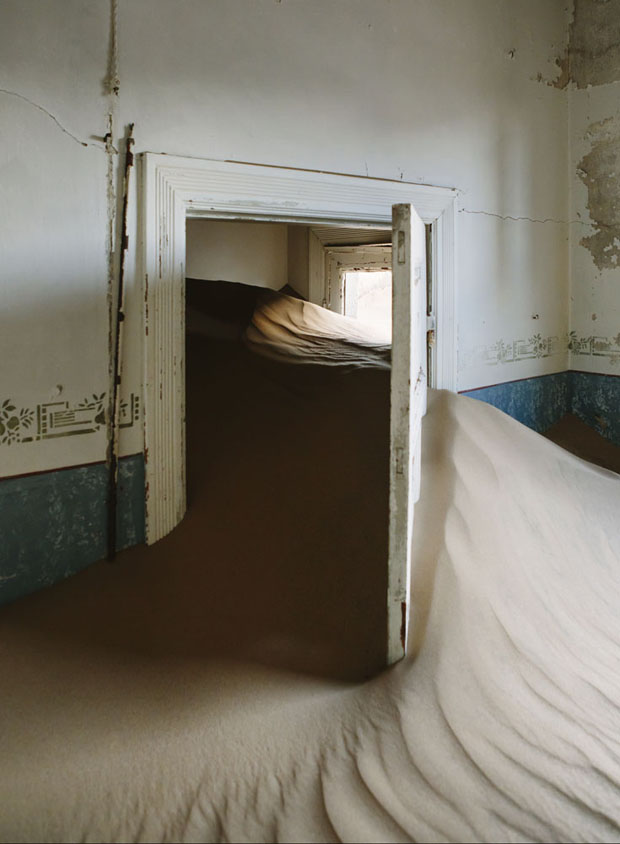 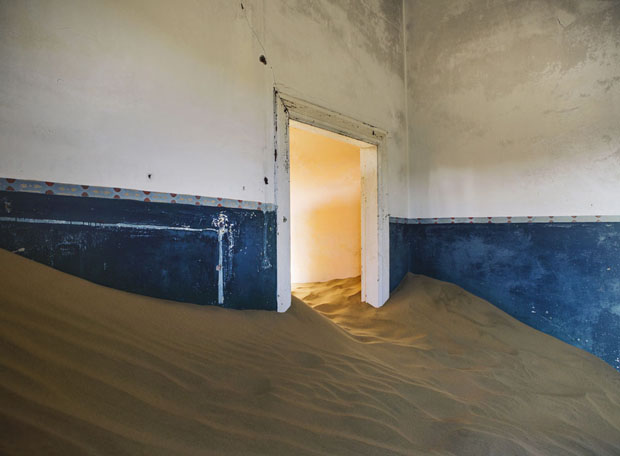 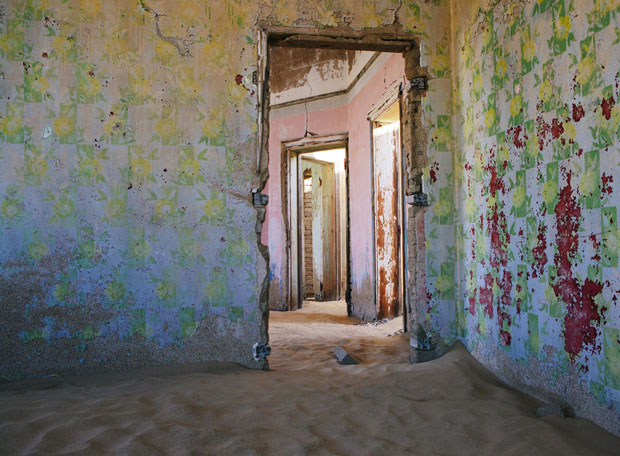 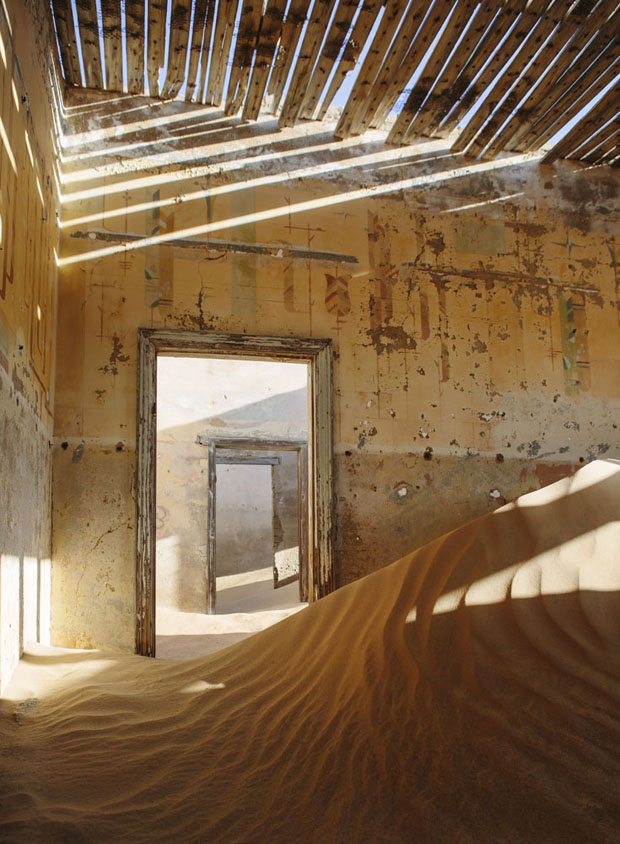 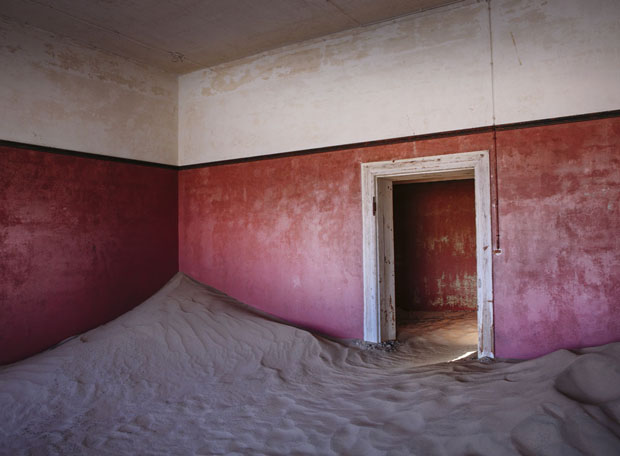