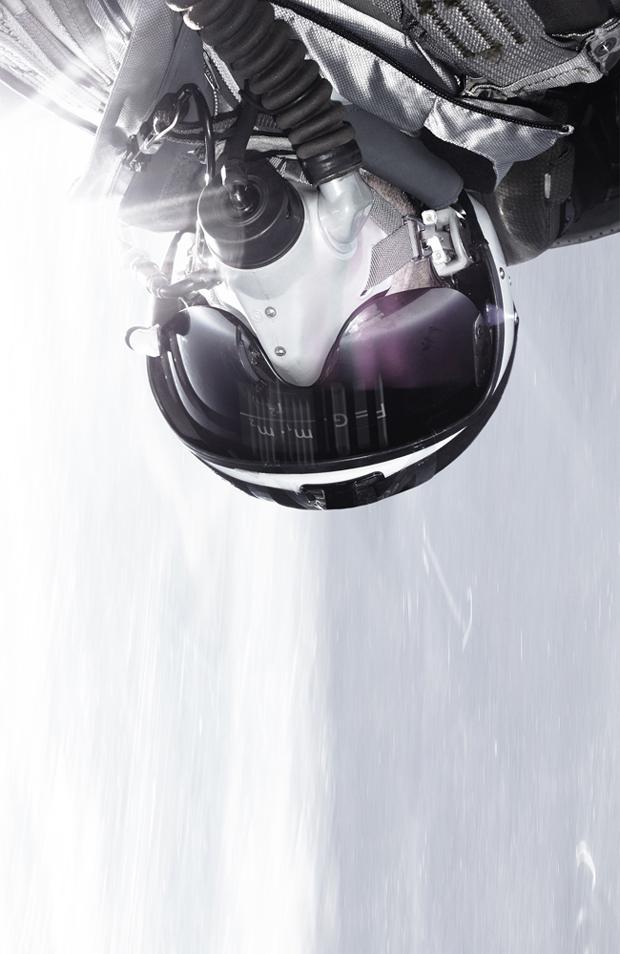 gravitational stress at the edge of space, 2013 © Michael Najjar/Courtesy of Benrubi Gallery, NYC.

This work was photographed during an edge-of-space flight in a Russian MiG-29 jet fighter, which was part of Michael Najjar’s cosmonaut training. Seated in the jet fighter, the artist was catapulted with supersonic speed into the stratosphere, reaching a height of 19,500 m. The artwork evokes the loss of orientation caused by enormous acceleration and crushing g-forces. The image is a self-portrait of the artist taken at 19,500 m at a speed of 1,800 km ph, and illustrates how totally dependent the human body is on technology for survival in such an extreme environment.

Sealed inside a Russian MiG-29 fighter jet, German visual artist Michael Najjar presses the shutter release on his camera and captures a self-portrait as he travels at 1,800 kmph in an edge of space flight. This stratospheric flight is just one of many steps aspiring cosmonauts must take in order to complete the intensive multistage space training course in Russia’s Star City. Since embarking on the training in 2012, Najjar has been documenting his experiences on camera, revealing to us a world that before seemed beyond reach and inaccessible. Scheduled to board SpaceShipTwo in the near future, Najjar hopes to be the first artist to fly to space.

In his futuristic ‘outer space’ images where astronauts dangle on umbilical cords in vast tanks of water, and where landscapes of Iceland’s glacial regions are superimposed with space probe shots of one of Jupiter’s moons, reality and fiction become ambiguously entwined. We speak with the artist to find out more about this fascinating series.

When did your interest in space training begin?
“When I bought my ticket with Virgin Galactic. I was very much interested in how professional astronauts have to prepare for a flight to the International Space Station (ISS).”

Where did you find out about SpaceShipTwo’s mission and where is it headed? Also how did you get a space on it?
“When I started the ‘outer space’ series in 2011, it was quickly clear that I wanted to fly into space myself to have ‘first hand’ experience. After doing some research I got in touch with Virgin Galactic. With the help of three of my collectors, I was able to buy ticket to become one of their Pioneer Astronauts.” 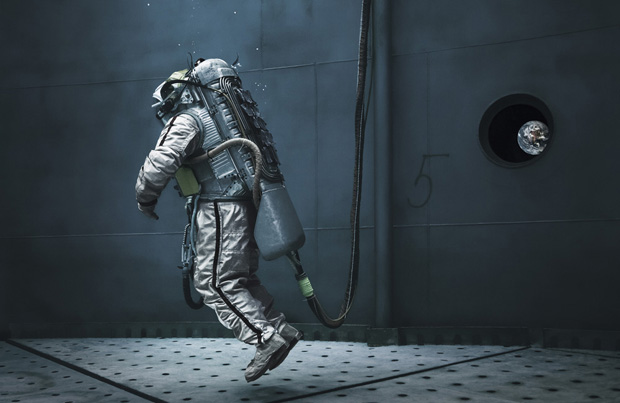 The work draws on a cosmonaut training session taken by Michael Najjar in December 2012 at the Yuri Gagarin Cosmonaut Training Center (Star City, Russia). The principle of simulating weightlessness in a huge tank of water is known as “neutral buoyancy” and was first developed by Buzz Aldrin in the Gemini project. Since then, the hydrolab has been a vital part of training for all cosmonauts and astronauts. liquid gravity explores the relationship between space, gravity, and the human body.

Why did you decide to take the additional training?
“As already mentioned I wanted to go to the limit and learn how professional astronauts prepare for space travel. Also the performative aspect has become an equally fundamental part of my work process.”

Typically how long does it take to qualify as an astronaut?
“If you want to fly to the ISS you need about two years of nonstop training. Sub-orbital flights like the one with Virgin Galactic requires much less training, but it’s important to be physically in perfect shape and train as much as you can. This is because our bodies are not made for a weightlessness environment or for withstanding high g-forces.” 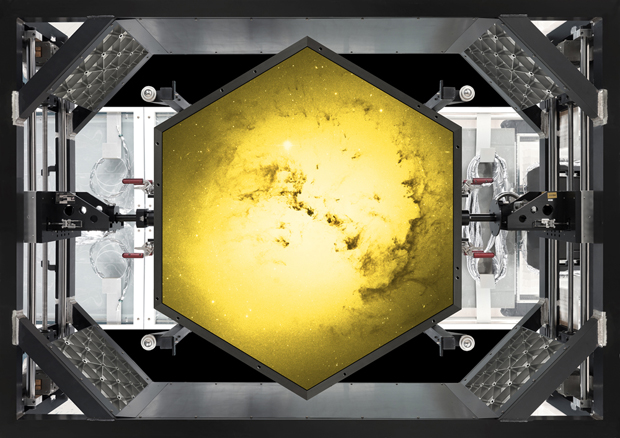 The work shows one of the golden mirror segments of the James Webb Space Telescope (JWST) to be launched into space in 2018. Its primary scientific mission is to search for light from the first stars and galaxies that formed in the universe after the Big Bang. The telescope’s primary mirror is a beryllium reflector with a diameter of 6.5 m and a collecting area of 25 m2. The data collected by this golden mirror in orbit behind the moon will change humanity’s understanding of the formation of the universe and the origins of life.

What stages must you pass in order to pass the space training course in Star City?
“I put my body through a grueling series of training sessions including a stratospheric flight in a MiG-29 jet fighter, zero gravity flights, centrifugal spins, underwater spacewalk training in a heavy astronaut suit, and a HALO Jump from 10,000m altitude. The edge of space flight was certainly the hardest part to do, but it was extremely important to see how the body reacts to extreme acceleration and constantly changing heavy g-forces.” 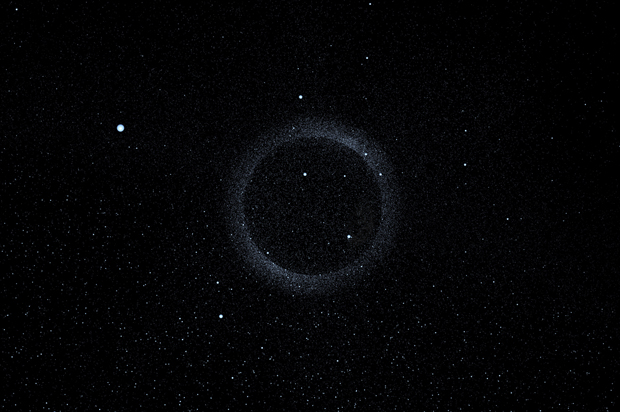 The work visualizes the population of waste objects resulting from explosions and collisions that are now in orbit around the earth. Each spherule in the picture represents a real object orbiting in space. These objects are orbiting at a speed of approximately 28,000 km ph and pose a serious threat to satellites, space stations, and space flights. The visualization was realized in collaboration with the Institute of Aerospace Systems/TU Braunschweig, Germany, the world’s leading authority on the tracking of space debris.

Can you describe what it was like sitting in the cockpit of this stratospheric flight?
“The key experience is that you lose entirely your sense of orientation during the manoeuvres. The extreme g-forces – up to 7 g – are hard to cope with, and I was several times very close to a black out. But having reached the altitude of 20.000 meters you look into the black sky and you see already the curvature of the earth – this is a sublime moment.” 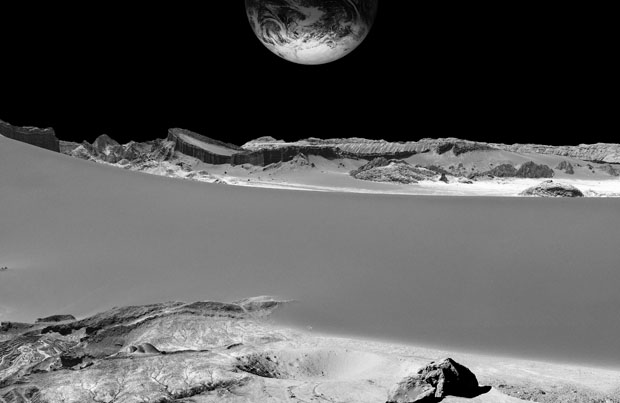 moon mining visualizes the importance of the moon as a future source of energy. Our moon possesses an abundance of helium-3 (two protons and one neutron). One ton of it could supply the electricity of a city the size of London for an entire year. Helium-3, which is part of the solar wind, is blocked from reaching us by the earth’s magnetic field. Both NASA and the China National Space Administration CNSA are gearing up to compete for the rich resources of the Moon.

The major part of the composition, “moon mining,” is taken up by moon sand, known as regolith, in which the helium-3 gas is embedded. The small moon base is a concept designed by the architect Norman Foster for the European Space Agency ESA, in which housing would be constructed from regolith using 3D printers. The work is composed of photographs of Moon Valley in the Atacama Desert and original shots of the moon’s surface taken by the Apollo astronauts. 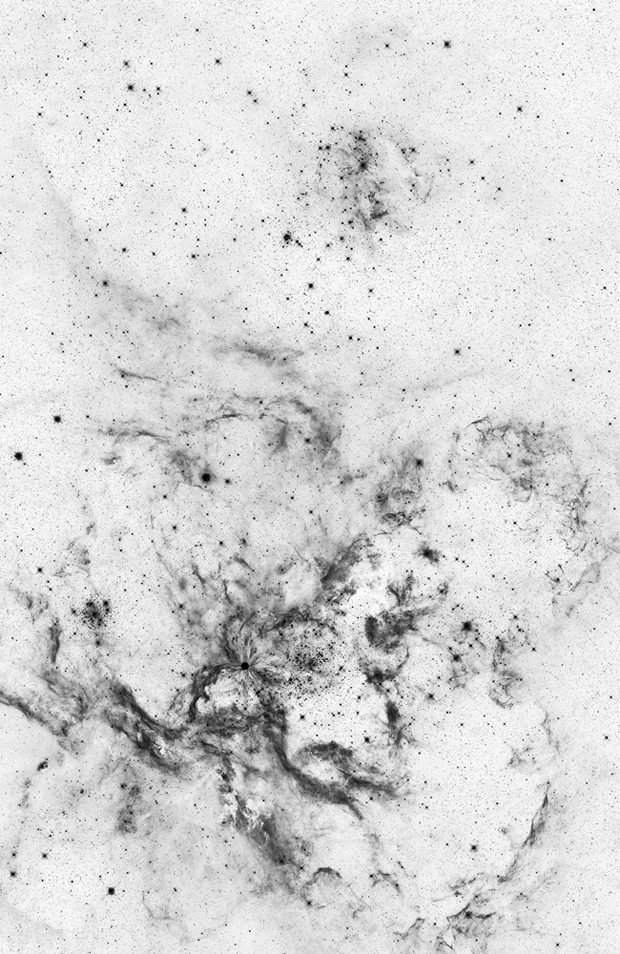 oscillating universe, 2014 © Michael Najjar/Courtesy of Benrubi Gallery, NYC.
The work is a visualization of the so-called Big Bounce theory describing the birth of our universe. According to the oscillatory universe theory, the Big Bang was simply the beginning of a period of expansion that followed a period of contraction. This suggests that we could be living at any point in an infinite sequence of universes, or conversely the current universe could be the very first iteration. The composition is based on super-high-res data visualization taken by Hubble Space Telescope. Several parts of the Universe have been stitched together to form a new fictive Universe. 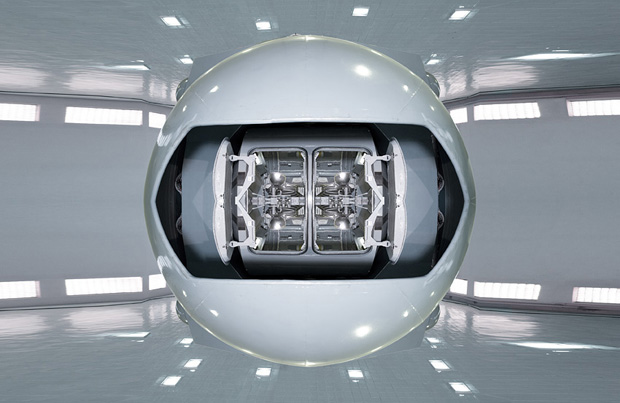 gravitational rotator, 2013 © Michael Najjar/Courtesy of Benrubi Gallery, NYC.
gravitational rotator shows the world’s largest centrifuge at the Yuri Gagarin Cosmonaut Training Center in Star City, Russia, considered the “mother” of all centrifuges. Centrifuge TSF-18 (its radius is 18 m) has been used since 1980 for the selection and training of cosmonauts. It effectively simulates the bad factors of space flight such as longitudinal g-load, physiological micro gravity, low cabin pressure, and the different temperatures, humidity, and gas composition of the cabin air. 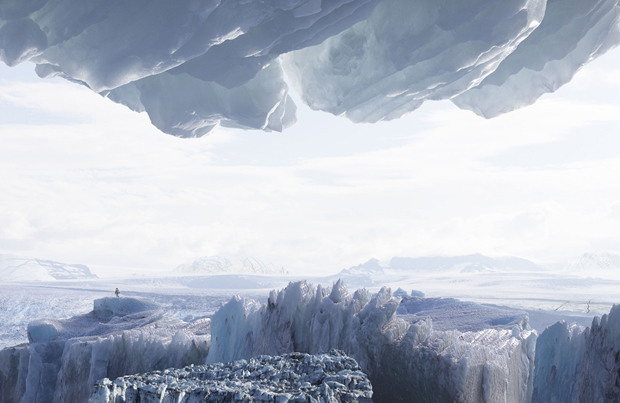 The work is a visualization of the surface of Europa, one of Jupiter’s moons, and one of the most likely places to find life in our solar system. The entire surface of Europa is covered by a thick ice shell several kilometers deep. The American Jet Propulsion Laboratory, which also built the Mars Rover, has now for the first time showed scientific evidence that there is an ocean under the ice shell. The hybrid composition fuses landscape portraits photographed in a glacier region of Iceland with images of the surface of the Europa moon taken by the flyby Galileo space probe. The work also conveys humankind’s irrepressible urge to discover new worlds and learn more about the origins of human life.

Michael Najjar will be presenting his work for the first time in the United States at Benrubi Gallery, NYC from March 31st to May 14th.