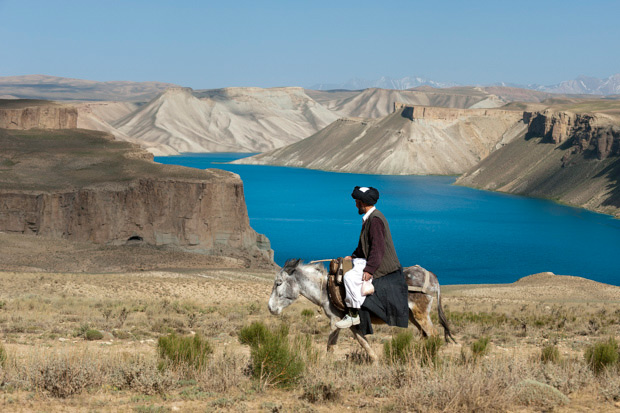 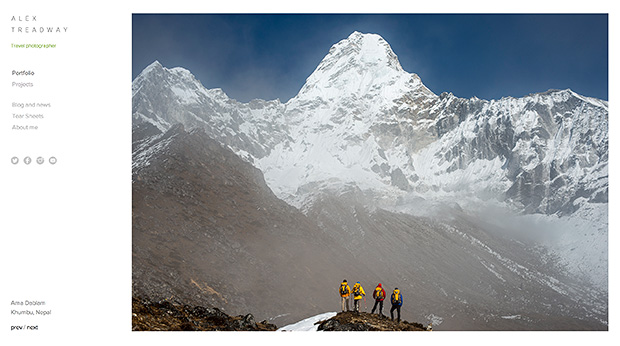 With an insatiable desire for travel and remote destinations, National Geographic’s Alex Treadway explores the wide and wonderful world with camera in hand. The British photographer has travelled to dozens of countries on assignment, including four years in Nepal where he worked on Base Camp, a series of sweeping images at the foot of Mount Everest. Aside from shooting extensively for National Geographic, Treadway’s client list includes GEO Special, Outside, Action Asia and many others. Whether trekking through Pakistan or hiking up a mountain range, Treadway not only photographs exotic locations, but truly experiences the land, culture and people who live there. We spoke with him about his favorite adventures and why Squarespace settles all of his anxiety about building his own website. 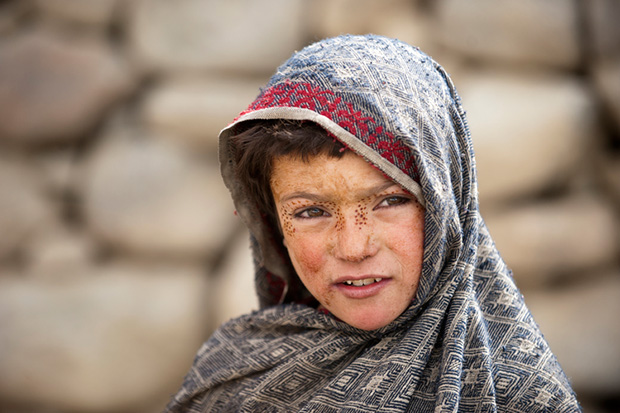 Describe your photographic philosophy.
“I have always (and still do) enjoy photographing people the most. I think for any photographer working with people, having a philosophical approach and an openness to generate a connection with the subject is at the heart of intimate portrait work. Robert Capa once said ‘if your photos aren’t good enough, you’re not close enough’. I love that quote, and it’s always been present in my approach. I rarely work with long lenses, especially for portrait work. 50mm and 85mm is where I like to be. I want to be up close and personal. I love the challenge of developing a relationship and intimacy with the people I’m shooting, so I can get their trust but mostly so I can get the truth.”

How long have you been working as a photographer? How did you make your way into the business?
“My Dad was a Marketing Director and a pretty good photographer. We had a dark room at home and I always wanted to be in there when he was processing prints. It was the most exciting thing in the world to me to see images develop right before my eyes. It was like magic and my imagination used to run wild wondering what images would appear next. I chose to do photography at school and Dad bought me my first real camera; a Chinon with a Pentax lens. The first picture I ever took was of two people mid-tackle in a hockey match. The ball was just off the ground and that was so exciting to me to see a moment of time that I had captured. I was hooked and it wasn’t long before Dad was asking me for permission to enter the dark room.

“Upon leaving school I decided to become a graphic designer and went to art school in Falmouth and then Denmark. I came back to London and spent ten years working in design studios. In 2007 I decided it was time to rekindle my passion for photography. I closed down my little design company in London and bought a second-hand Nikon FE2 and went to India. I spent a year in India traveling from one corner to the next photographing and writing my own travel journals. I ended up in Nepal and found photography work for travel magazines and NGO’s (Non Government Organisations). In 2012 my first book was published called ‘Life in the Himalayas’.” 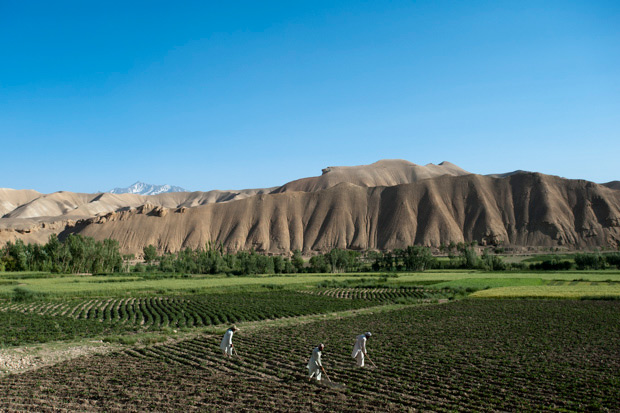 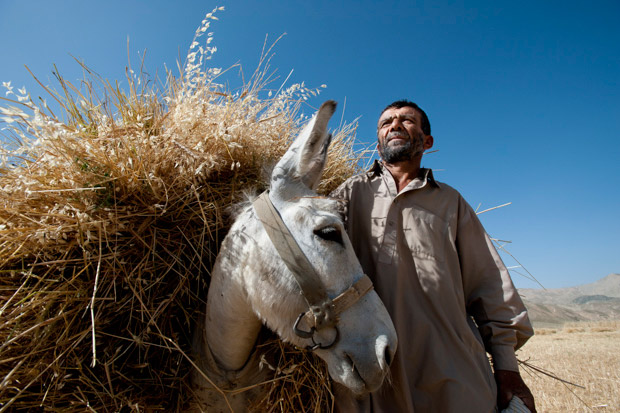 How do you gain access to such remote locations? And what is your process for planning a trip?
“I spent three years living in Nepal which gave me enough time to work with a variety of NGOs and magazines. The assignments would gain me access to all sorts of interesting places throughout the Himalayas. I would also simply just go myself. I spent a lot of time in the mountains getting to know the climbing community. I was lucky enough to stay at Everest base camp a number of times with expeditions and made things happen that way. There’s no magic words of advice for aspiring photographers to get work. Go somewhere that excites you and then be prepared to spend a lot of time getting to know the surroundings and developing connections and relationships.” 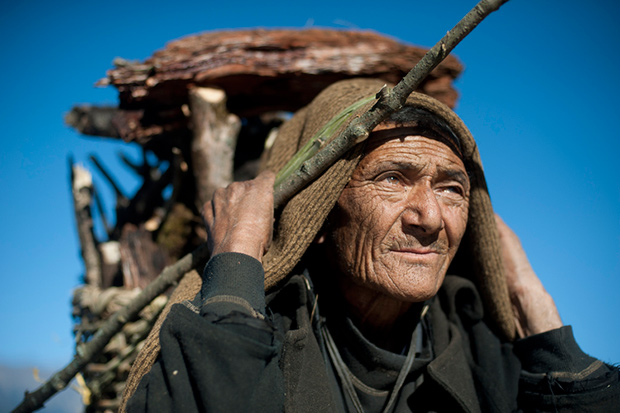 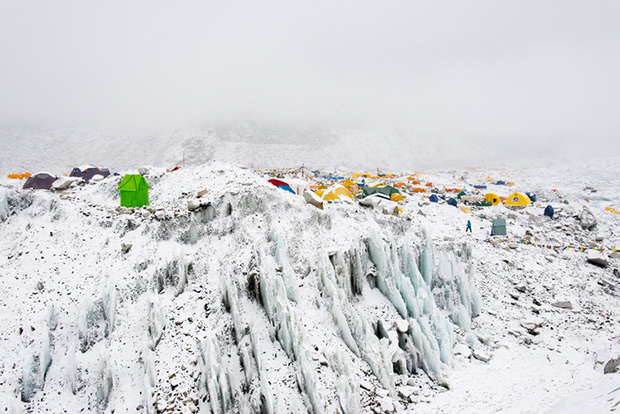 Most of these areas you’re traveling to aren’t for the novice explorer. Have you had any close calls on any of your expeditions?
“Some of the places I travel to certainly pose challenges. However with the right planning and care most trips go without major incident. I remember something my diving instructor said to me when I first learnt to dive. I asked him how he prepared himself to be down there so long and he said, ‘that’s simple, I make damn sure there’s enough air in the tank’. Simple but essential are the key things to remember if you’re planning to travel somewhere with security issues. With good planning you’ll have a far better chance of getting good shots.

“I got hit by a big landslide in Ladakh once. A bolder the size of a fridge-freezer hit the roof of the jeep seconds after I managed to jump out. We ran through a bombardment of flying stones and spent the night sleeping in a hut at 4500m. I also got lost in the snow trekking across a pass in Pakistan and spent a night freezing in a log cabin. Of course things don’t always go to plan but that’s part of the excitement.” 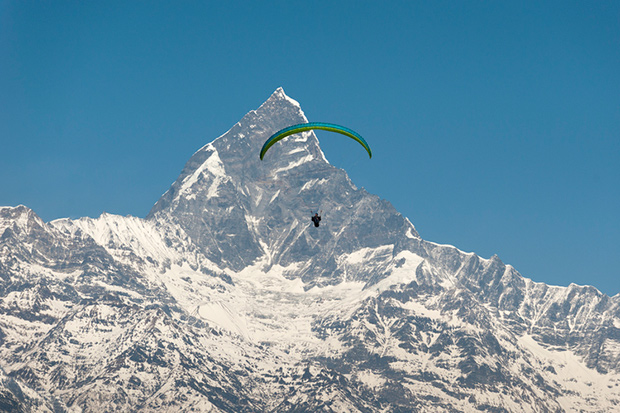 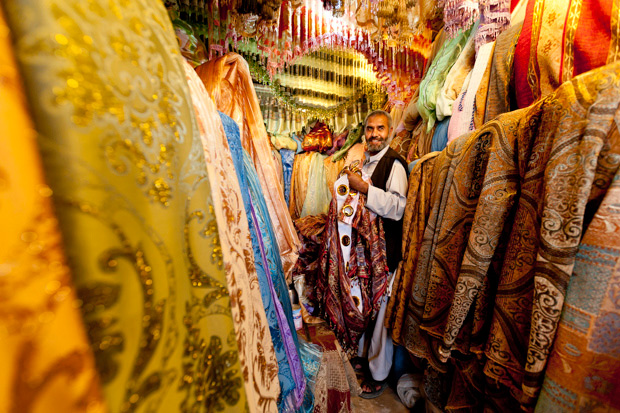 Your portraits are so gorgeous and I am sure your subjects’ stories are interesting too. Please describe one fascinating encounter with one person you’ve photographed.
“I spent most of my time in Afghanistan photographing people, and everyone I encountered had an interesting story to tell. I spent a week in the Panjshir valley which is where some of the most intensive fighting occurred between the Soviets and the Mujahideen during the Soviet war between 1980 and 1985. All the elders I photographed there had interesting stories to tell. One man I photographed had lost his entire family and fled to Herat to work making ammunition. Thirty years later he finally returned to the farm he grew up in and started growing apricots. Even today land mines are still a big problem and there’s hillsides just 1km from his home he dare not risk walking. He has no family left but he says he’s just happy to be home at last.” 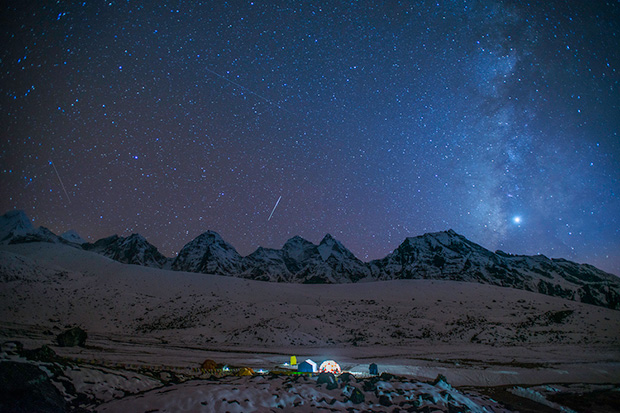 It’s the dream of so many to work with National Geographic. How did you make it a reality? And what is it like working on commission for the company?
“I was staying at Everest base camp for the duration of the climbing season working on a personal photography project to show the before and after effects the expedition has on the mountaineers. I didn’t really consider beforehand that by being there during the night I would have the opportunity to photograph base camp under galactic night skies. As well as the project I was working on I took a series of pictures of climbers making their way out of camp at night, through the glacier and up the icefall. After the expedition had finished National Geographic were running a piece on Everest and they contacted the expedition leaders looking for images from that season. I was staying with Russell Brice who was also facilitating the filming of a program called ‘Everest Beyond the Limit’ that year. He runs the biggest operation up there and is well known to National Geographic. One of my night shots was chosen as a double-page spread and from there I began to forge a relationship with them.”

If you could journey back to one place you’ve visited, where would it be and why?
“Madagascar. It’s an extraordinary place. It’s huge and endlessly diverse. I was very young when I went there, it was the first time I’d ever really travelled alone. I’d love the opportunity to go back and explore more.” 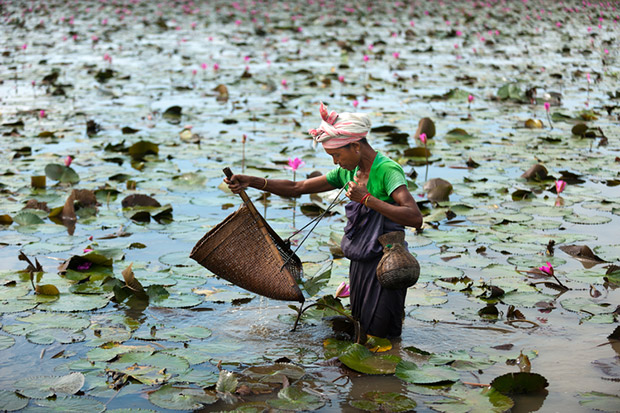 Is there one place you are dying to photograph that you haven’t yet visited?
“There’s more than one really but if I had to choose it would be Micronesia. I’ve spent a lot of time working in the mountains but I’d really like to explore the underwater world more. In Micronesia the local people have developed extraordinary techniques for fishing and living almost entirely on the water. There’s whole villages where the houses are built on stilts and people rarely go ashore.”

What projects are you most excited about currently?
“I have been to all eight countries in the Himalayan region and one thing that still eludes me is the Snow Leopard. They’re such beautiful creatures and I’d love to see one in the wild. It’s not easy though and sadly they’re getting even rarer. We may well lose them altogether in the coming years which would be a tragedy. I saw their skins for sale in a market in Pakistan once which really hit home how serious a problem poaching is. I’ve been planning a trip to Ladakh to photograph Snow Leopards at night.

“I’m on assignment in Nepal in October to document a trip to Langtang and a pass called the Ganja La. I also have a trip planned in November to go to Argentina and travel south from Mendoza along Route 40.” 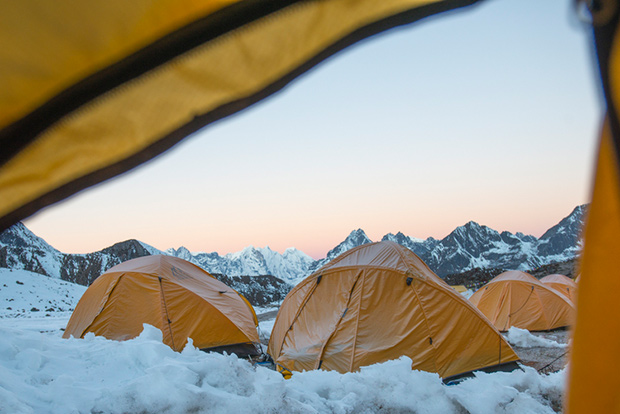 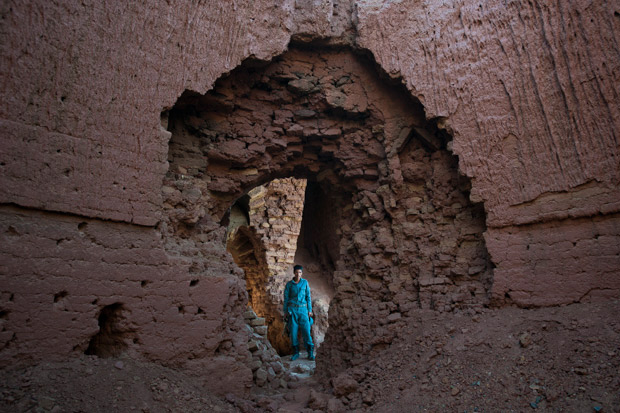 What do you like most about working on the Squarespace platform?
“It’s great to be in control of the site myself. More than that I like the fact that the technology is constantly being improved and updated by Squarespace meaning that my site isn’t about to fall over because it stops working on a browser upgrade or something. The team at Squarespace are always working to make sure it meets current standards.”

Did you make any customizations to it? And if so, what were they?
“Not beyond the Squarespace system, which is quite enough for me. There’s tons of ways to customize it with very easy-to-use tools. The word ‘code’ just makes me shiver.”

How did this template correspond with your photographic aesthetic?
“I wanted to see the pictures big which this offered me. I also wanted to be able to show projects in sets of images. I also just really liked the super-clean look. I want the website to be about the pictures and not be distracting with logos, colors or design.”

Did you find it easy to integrate your blog and portfolios all in one place?
“It’s pretty easy but like learning any language it takes time to become fluent. It’s a fun journey though and I am very impressed that Squarespace have built a platform which is intuitive and enjoyable to use.” 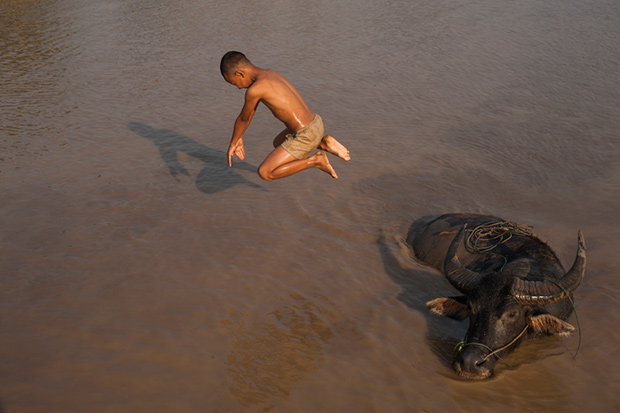 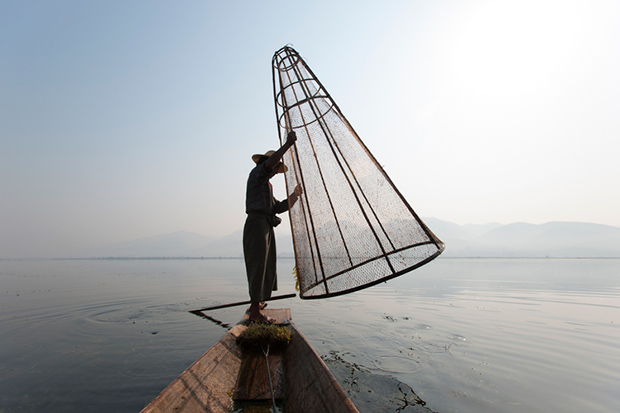 Squarespace is a Feature Shoot Sponsor.