Gavin Watson Looks Back on His Childhood as a British Skinhead 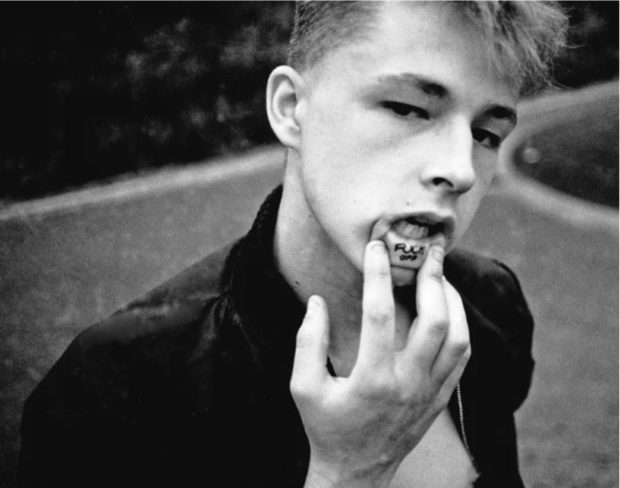 Long before the UK skinhead scene was co-opted by right-wing movements it was a culture created by the working class looking to forge a connection across the races. If first emerged on the streets of London in 1969 in response to the self-indulgent pretensions of bourgeois hippiedom. Forged in the council estates and East End slums, skinhead culture combined the style and sound of the Windrush generation with the back-to-basics aesthetics of post-war Britain. It was reborn again in the late 1970s and 80s, just as photographer Gavin Watson came of age.

By the time Watson left school at age 16, he had shot some 10,000 pictures of his friends in High Wycombe, documenting the poignant beauty of their daily lives, finding inspiration and solace in the space where rebellion, style, and self-actualization meet. In Oh What Fun We Had! (Damiani), Watson delves into his archive for a fresh look at a vastly misunderstood and misrepresented culture before the right-wing infiltrated it and spread disinformation through the mainstream media.

Beginning in 1994, with the publication of his first book skins, Watson has been on a mission to reclaim his roots and culture from those who have disrespected it. Here he shares his experiences and insights into the truth about skinhead culture — a history that can only be told by an insider.

How did you get into photographing skinheads in High Wycombe?

“The purity of it, the grassroots of it, which we are so lacking now. Obviously, it gets tainted over time but the roots of it were pure. It’s a shame that there’s been so much bullshit written about it, used to target anyone.

“Everything was very compartmentalized going right down to the years at school. The punk thing had come along and it wasn’t our generation’s thing, but it was still very much in the environment and the atmosphere. I got to 14-15, and Madness the Two Tone movement came out of punk but it went back to the roots of the skinhead Jamaican music. It spoke to me after I saw Madness on TV.

“I suppose it happens to all kids, whether its Led Zeppelin or Jay-Z. When something gets you and grasps you — and to watch something grow organically. I had no idea there were skinheads in the ‘60s; I thought it was all brand new. It grew organically from the ‘60s, went away and came back with another generation of kids.

“We had grown up with all the West Indian kids, we were divided in the ‘70s a lot more but by the ‘80s came along we had grown up together, unlike our parents who had no immigrants in the country. Black and white, we made our own bands and tried to do something about race relations, that was soon stomped upon – and that was the zeitgeist I came into in puberty.

“It all combined with me discovering there was a world out there with chemistry going through my system — girls, basically, from being unpopular to cutting my hair and being a part of that very brief zeitgeist before it was kidnapped by the powers that be and made into something they could weaponize, which was the right wing element – which was very small actually. But they’ve got their narrative.

“You can’t deny. This wasn’t meant to exist. I feel like an anomaly. They’ve got their narrative and very few of us get through those cracks. You’ve got the narrative that skinheads are big tough Nazis, and the rest of it, and that was what was sold. Then my book comes out and people were like, ‘These look like little kids to me.’

“I was so young and pure myself. It was so small: my council estate and my gang of mates you can count on. It was just my mundane life but I photographed it in a way that makes it look like I lived in a movie, but it was just as boring as anyone else’s childhood.”

The media demonized skinheads as an extension of Nazi and fascist organizations, when that wasn’t the case at all. The movement had been hijacked and suddenly no one in journalism thought to do any research into who these kids really were.

“The narrative was totally and utterly contrived. There was a small bunch of mercenaries that they put in a squat in London, and they did continuous stories on ‘Nazi skinheads.’ Then that goes abroad and idiots pick it up as if it’s real.

“What happened is a lot of the right wing skinheads in Germany and France, when they found out where it was from, they went off to become ska skinheads because they realized there was more to it than being right wing and scary. That’s what make it really sad. We were demonized and at the bottom of the pile. Such easy targets.

“The working class are on the front line of all this political stuff. They are the ones who have to live together. They have to get on with each other, while a lot of people in glass houses throw stones at them. They hate the working class with a vengeance. It’s been like that all my life.

“The punks were in their cellars and everything was collapsing around us. The promise of the new world was totally destroyed by the late 70s and 80s. All we had was our clothes and our anger to express ourselves in. Then we got demonized for that. But that’s brilliant — you’re a rebel so fuck it. It’s kind of sweet, it’s kind of cute, innit. We used to think it was edgy, but it just looks like Gap fashion now.

“If a bunch of pictures of innocent kids rile people, up, good. That’s what art’s about. So it should be. If it was a picture of a loaded Goth, no one would give up a fuck. It stirs up thoughts and feelings. Even though it was unconscious to me art the time, I’m proud of that fact.

This is your world – everyone is having fun.

“You find your group. We are a tribalized species. We find our people and tend to speak with that. We are all the artists, all the kids that didn’t quite fit into anything and we found our home within punk or skinheads, and it gave us protection within the group.

“Where you find a solid, healthy working class environment, you will find ska and skinheads: Mexico, Indonesia, Guatemala. It’s deeper than politics; it’s deeper than the music. There’s a mystery part of why skinhead speaks to people the way it does. It’s a lifelong thing.

“There was never a problem until it was all engineered. Nothing has changed. It’s got a lot more solidified. I used to feel isolated about how much bullshit was out there that we saw through at an early age. We had to rebel. It seems like more people are catching on to the fact that their lives are manipulated and socially constructed.

“People lost their lives over their lies. I wonder how many skinheads have been stabbed to death because of the lies told about what they are. I didn’t want this book to be about it but there’s no way it can’t be. There’s brutal honesty in there. It brings all these things up.

“We would never get in the newspaper. They made up stories about us. I remember when me and my mates went to school like, ‘Where are these Nazis they are talking about?’”

Your photographs set the record straight. This is the opposite of everything the media would have had us believe when they were trying to sell newspapers with disinformation. Your photographs capture the innocence of youth, that often gets lost in the traumas that poverty can induce.

“I am a romantic. I have always been one. I photograph romantic pictures. I’m still a romantic, to my detriment. I created something evocative and beautiful tn them. I was seeing people knocked over going through my book looking for a pair of white laces to explain what they are indicative of. They’ll go past the Black guy and the Pakistani and they’ll go through it all to find a Swastika in a bad bit of graffiti in the background. We’re dealing with 30 years of brainwashing.

“I now understand why we hated students. We had a natural aversion to all these privileged fuckers who will never doing anything physical with their hands get people like me and my mates to fit their tires and clean their toilets, and then demonize and attack us for being the worst people on the planet. That always got me. ‘Oh, they killed the messenger!’ Yea, well the messenger is from the enemy.

“What’s crazy to me is I took so many — thousands upon thousands of pictures. I just took them and took them and I ended up taking at least ten thousand. From a little kid on a council estate with no money, I can’t believe it. I have this massive archive for no real reason, except I enjoy taking pictures.

“I always feel there is something bigger than me behind me doing this, a force that I don’t quite understand. It’s natural. I hadn’t even left school when most of these photographs were taken and I left school when I turned 16. I was kicked out. most of this stuff is before that. Me looking at it as a 53 years old man is unbelievable because I’m not this kid anymore.”