Tragic, Heartfelt Photos from the Streets of Poughkeepsie 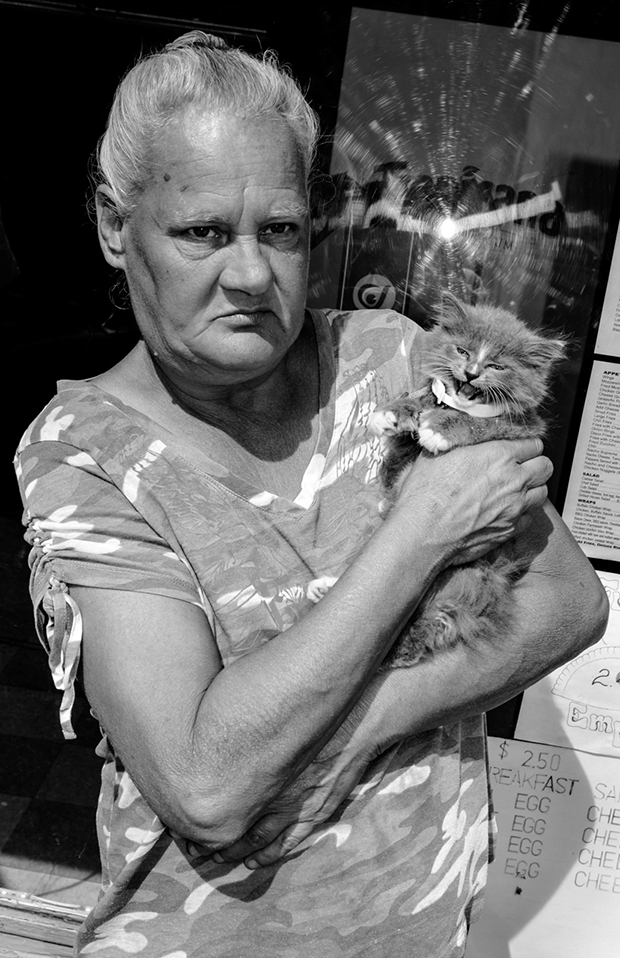 During his junior year at Vassar College, the photographer Caleb Stein passed through Main Street in Poughkeepsie, New York every day on the way to his internship with Bruce Gilden. He stopped for the first time when a group of basketball players caught his eye. He took out his camera, and he spent time talking to them. Over the next year, he made a point to visit Main Street and travel back to campus by foot. “ I started to see the same people in the same places,” he remembers. “And they started to recognize me.”

Stein learned to see Poughkeepsie through the eyes of its residents, whose local economy suffered with the completion of the Poughkeepsie Galleria Mall in the 1980s and the downsizing of IBM in the early 1990s. These days, 19% live below the poverty line; the photographer has met people who have battled drugs, turned to sex work, or lived on the streets. Jimmy, the son of a woman who appears in Stein’s photographs, died from a drug people referred to as “elephant tranquilizer.” There had been others present, but no one helped him.

While the photographer says there isn’t much hope in Poughkeepsie, he has found sources of joy.  “The [locals] mention the little things that make it worthwhile, like Kennedy Fried Chicken, the Hudson River, the historic architecture,” he explains. “A lot of these people love the fact that when they walk outside they know everyone; Poughkeepsie is more a village than a small city to those who have always lived in it.”

Stein lives and works by some simple rules: he always asks permission, and when it’s possible, he shares his photographs. Sometimes he can’t give out files or prints because his subjects might not have reliable internet or a permanent address; in these cases, he shows them his images right on the street. “There’s this moment of recognition or disbelief that happens when someone is confronted with a photograph of themselves,” he writes.

Susan Sontag believed Diane Arbus took pictures because she longed to “violate her own innocence [and] her sense of being privileged.” As a 20-year-old starting out, Stein might have been driven in part by a similar impulse; he admits that Vassar students, his former self included, tend to see Poughkeepsie “as a dangerous and inaccessible place. ” But somehow, he’s found more than he bargained for on Main Street. Instead of uncovering the secrets of strangers, as Arbus would have wished, he’s stumbled into a sense of belonging.

When Stein walks that three-mile stretch today, he’s not looking for “the unknown”; he’s looking for familiar faces. The ordinary moments shine the brightest. In one photograph, Nikki, a friend and subject, looks for a bug in her boyfriend’s eye. It’s a surreal and magical picture, and Stein thinks it looks like something out of Nosferatu. “Now that I’ve graduated, I’m living right off Main Street, on North Cherry,” the artist tells me. “ It’s starting to feel like home.” Below, Stein shares some of the stories behind his images. Follow the artist on Instagram for more. 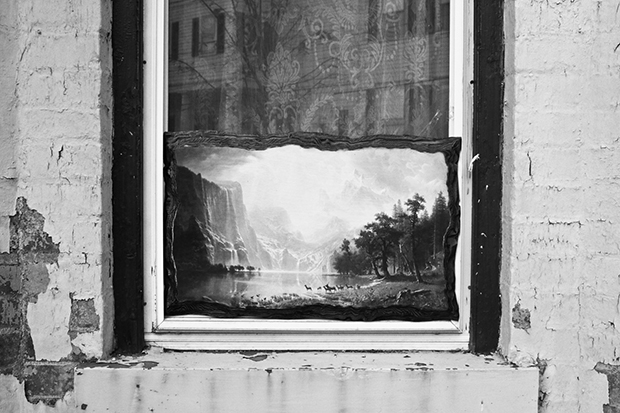 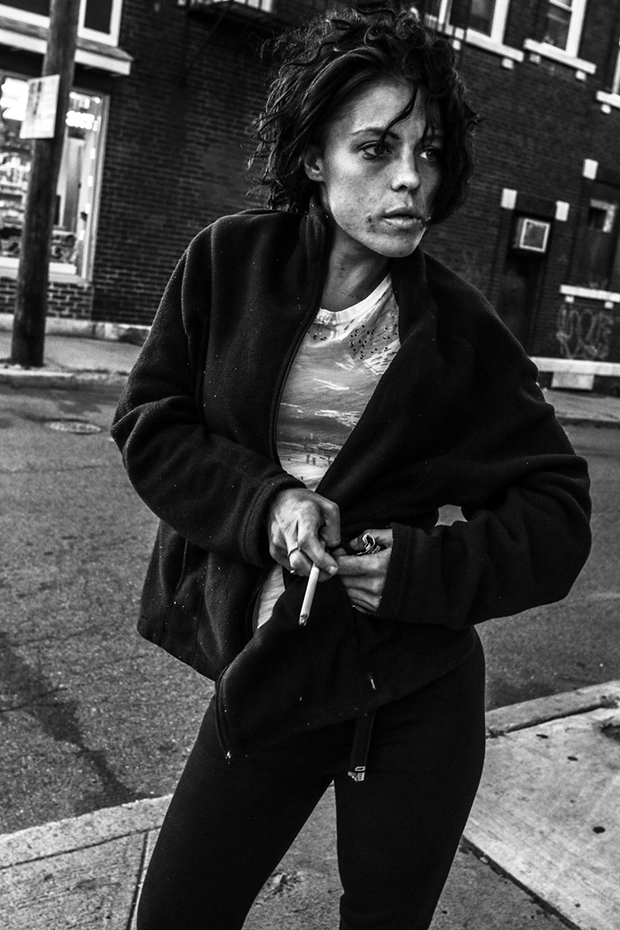 “Nikki, a woman who is featured in a lot of the pictures in this series, came from a home where her mother was a drug addict. She hasn’t seen her family in years, including her daughter, and spends most of her time doing drugs or trying to figure out how to get them. She’s been to jail – where she got clean and put on some healthy weight – but when she came out it only took two weeks for her to start taking the drugs again. She’s told me that prostitution and drug addiction have become a vicious cycle for her – she does sex work to buy drugs but she can’t do the sex work without being on drugs.

“This one time I showed Nikki the photo of her hair blowing in the wind as she stands on a street corner. I remarked that she looked like a Vogue model, but a drug addict – and she laughed, and agreed. She didn’t take offense. I’m not a tough guy – just a privileged white guy with a rather slight build – but I like to speak my mind and some people appreciate that.” 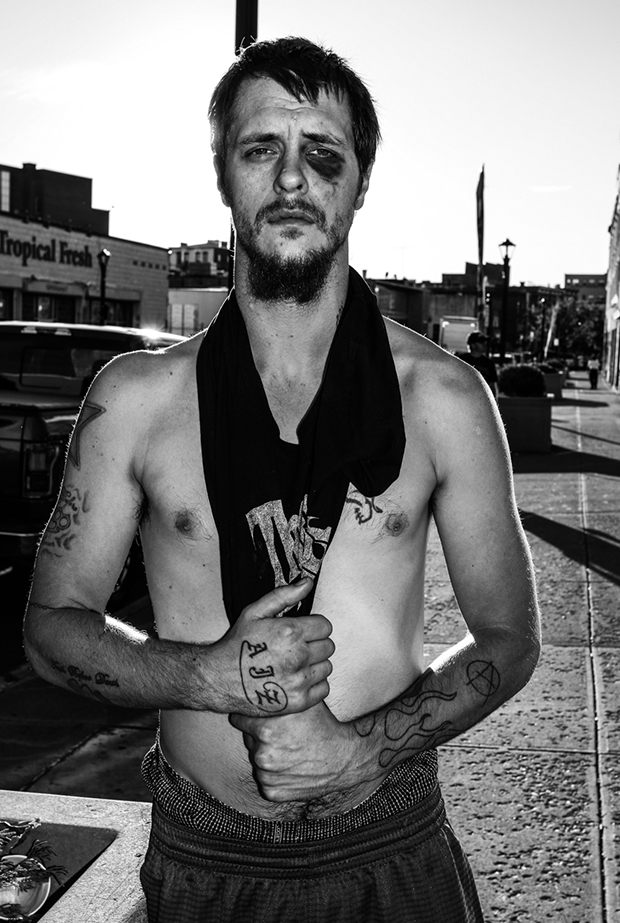 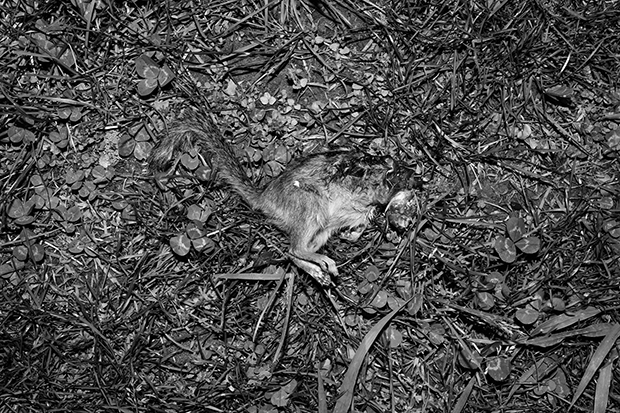 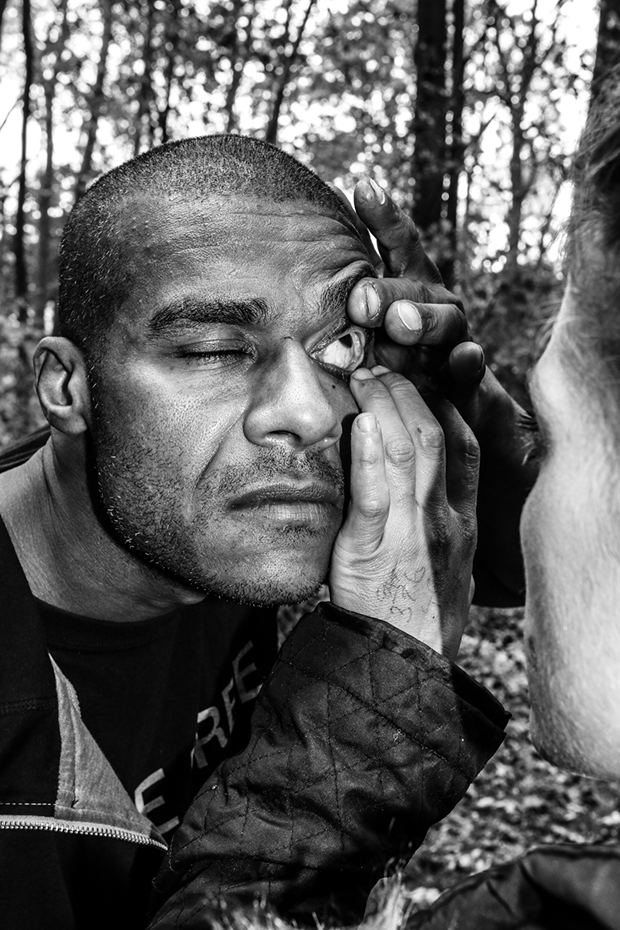 “Jose has been addicted to drugs since he was 15, and he’s 42 now. He’s been a drug dealer, a thief, a dishwasher, and a hustler. We talk about books, economics, crime, street art, a whole range of stuff. I have to say, and I’ve said it to him, that it’s sad to see someone who is clearly so intelligent but has continued to take drugs for so many years. He told me that I’m not the first person to tell him this.” 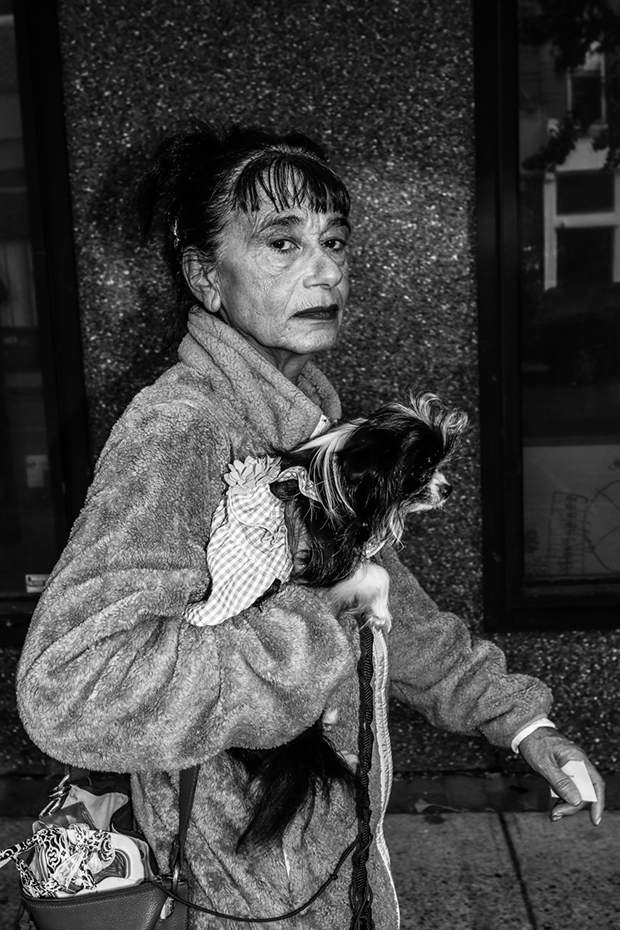 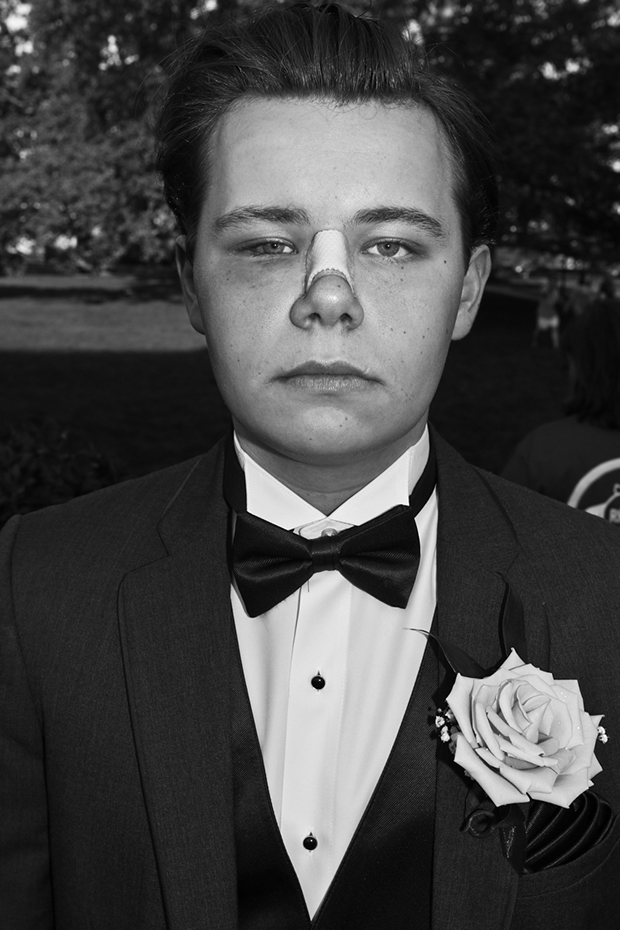 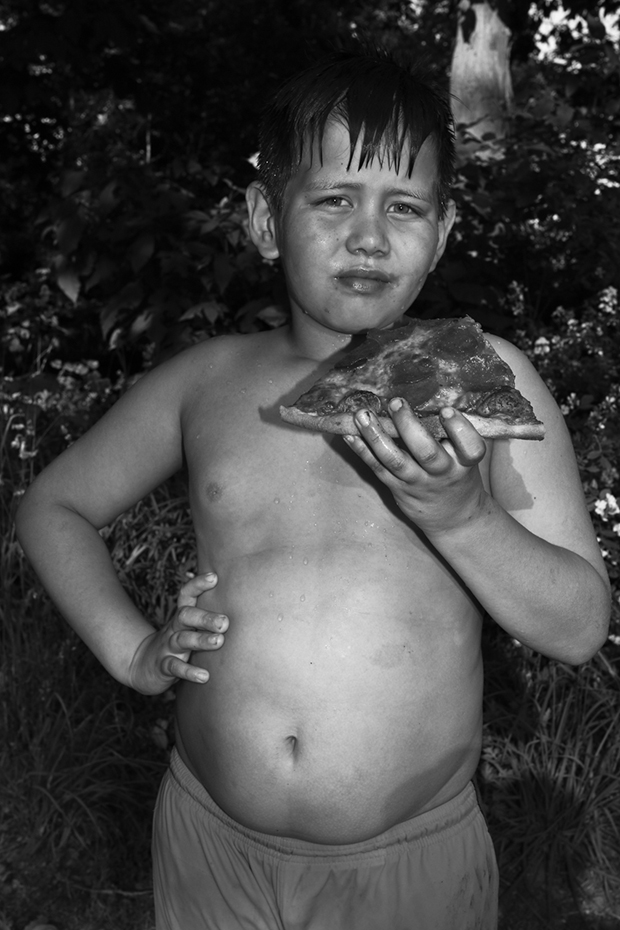 “[Not] everyone in Poughkeepsie struggles with drug addiction. Over the summer, I met a wonderful family while swimming at a watering hole by a drive-in movie theater. Everyone went to this watering hole, White Gate, to cool off on hot days. You can swing from a rope tied to a tree that jutted out into the water. Kaleb and I bonded over our similar names, he showed me his fishing trophies, we played catch together. At the end of the day, and the next time I saw them, too, I sent his mother all of the pictures.

“I was really touched when, one night, they even stopped by the restaurant while I was working to say a quick hello. In that picture of him with a piece of pizza in his hand, I’m drawn to the tension between his vulnerability and his hard, controlled expression – in some ways he’s older than his years but he’s still a kid.” 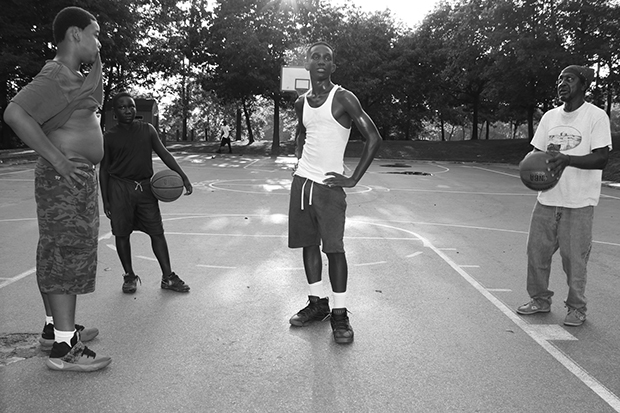 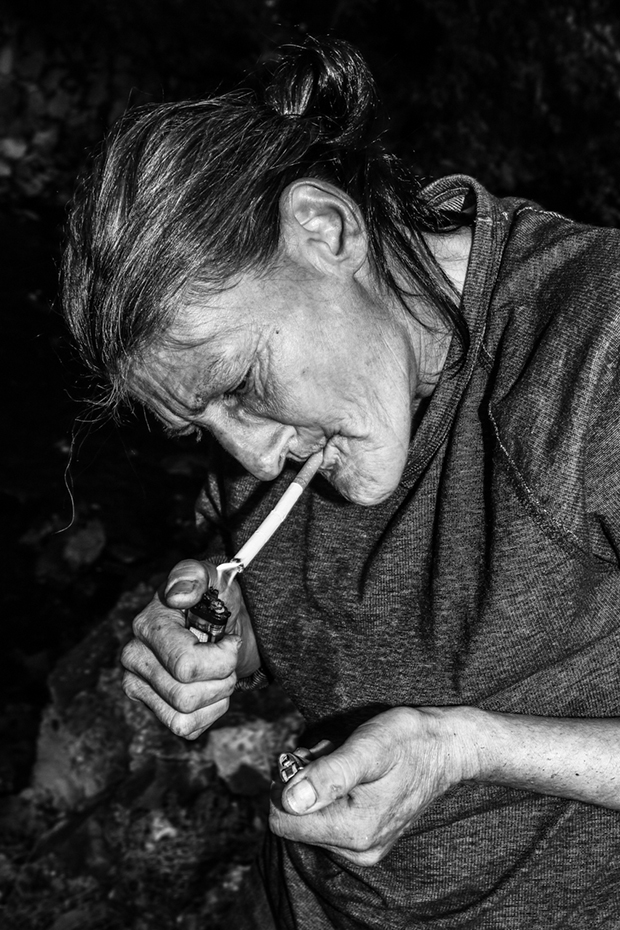 “Virginia has been addicted to heroin for decades. Her entire family has died of overdoses. She describes herself as a hippie child and a wild child rolled up into one. When I first met her she was telling me about how she goes down to Malcolm X Park, by the creek, and makes rock pools by gathering rocks and directing the stream into a closed-off area. She sits there on hot summer days. She tells me about her collection of four-leaf clovers, and the picture she took with a disposable camera of the moon – full and orange and big. I got the sense that she was a very creative person, without the resources to express that creativity in a more ‘traditional’ way (e.g., painting, drawing, sculpture, photography, etc).” 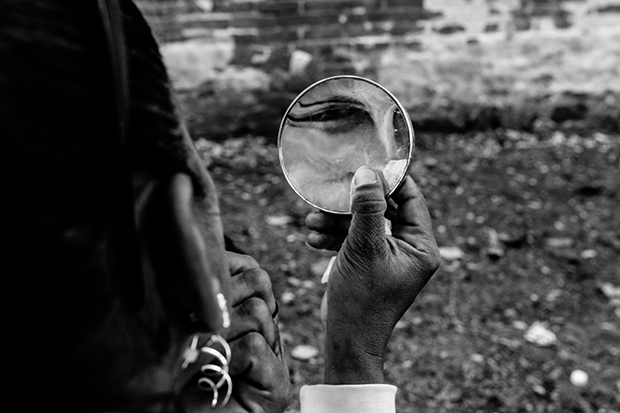 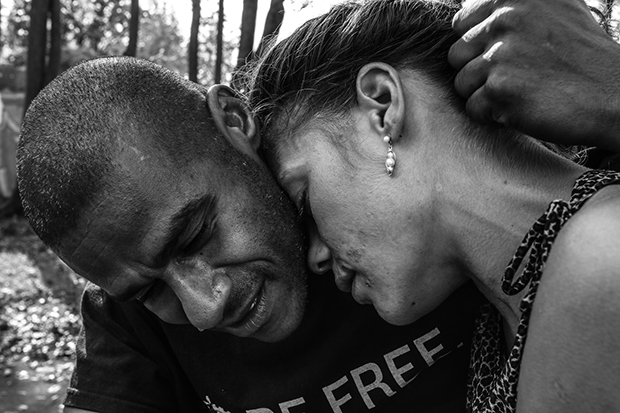 “A little over a week ago I spent the day with Nikki and Jose – from 10:00am to 6:00pm. I watched them get high while arguing over money and which drug dealer to call. We talked about an old Jewish cemetery from the 18th century and spent some time looking at the gravestones together. We talked about our lives, and I asked Jose about his childhood. He told me that his mother was a drug addict and that he was in foster homes from the age of 6 onwards. He told me he was sexually and physically abused from a young age by his foster mother.

“Later that day we were sitting in a park. Since neither of them have smartphones – even flip-up phones seem to be a rare commodity amongst certain groups of people in Poughkeepsie (no one seems to be able to hold onto a phone for long as it either gets lost, sold, or stolen) – they asked me to play songs for them on YouTube. So we’re sitting there listening to their favorite music and you could tell that this simple pleasure was transporting them to another place – however temporary that might be. They asked me to play their favorite song. They closed their eyes, held each other, and began to cry. But it was, all things considered, a cathartic cry, not a gut-wrenching one. It was sort of cleansing. And then Jose said to me ‘We’re just having a hard time right now. We’ll pick ourselves up again.’ I told them that I really hope that this is true, and that I wish them nothing but the best.” 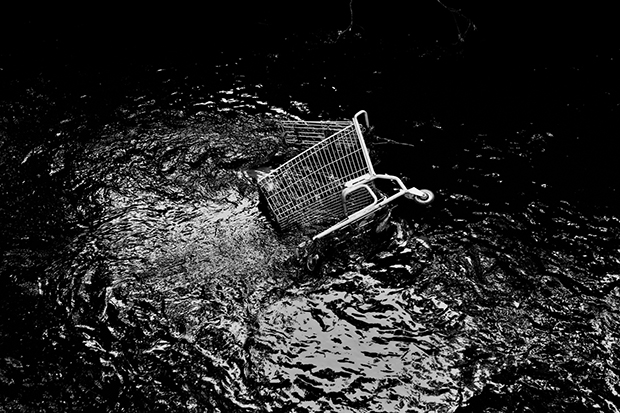 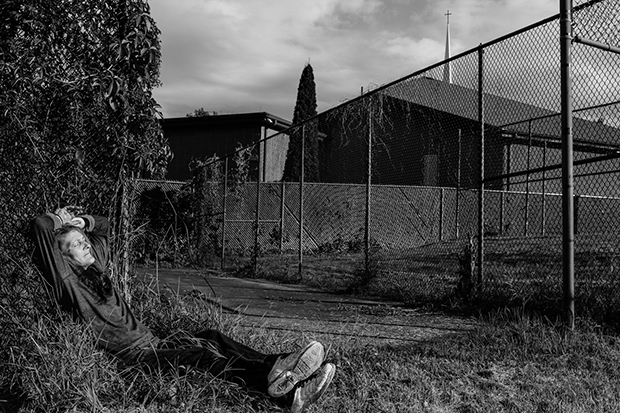 “I asked Virginia if I could take her picture by the rockpool; I wanted to take a picture of her near something she loves. We walked over there together, and when we arrived, a couple told her that her youngest son, Jimmy, had just died of an overdose. She broke down and cried. Her husband and her oldest son were already dead, also because of drug overdoses. She was inconsolable, but I stayed with her for another hour until her cousin and her best friend arrived. I wanted to help in any way I could, although there was little I felt I could do.

“What struck me was that she was crying one minute and cracking a joke the next. I guess life isn’t as clean, neat, or simple as in the movies. She kept apologizing to me, saying ‘I’m sorry, I know that this might make a good photograph, but it’s not how I want to be seen,’ and I kept telling her that the moment she found out the news I’d completely dropped the idea of photographing her that day. I told her there’d be another day and that we’d take the photograph when she was comfortable. All of this is by way of saying that I want to make strong photographs without making other people feel like shit. A couple weeks later we saw each other again, and I made a photograph of her, after she’d shot up, as she’s basking in the late afternoon sunlight in a dilapidated basketball court.”

All images and captions © Caleb Stein