Daily Life of a Luk Thep Doll in Thailand 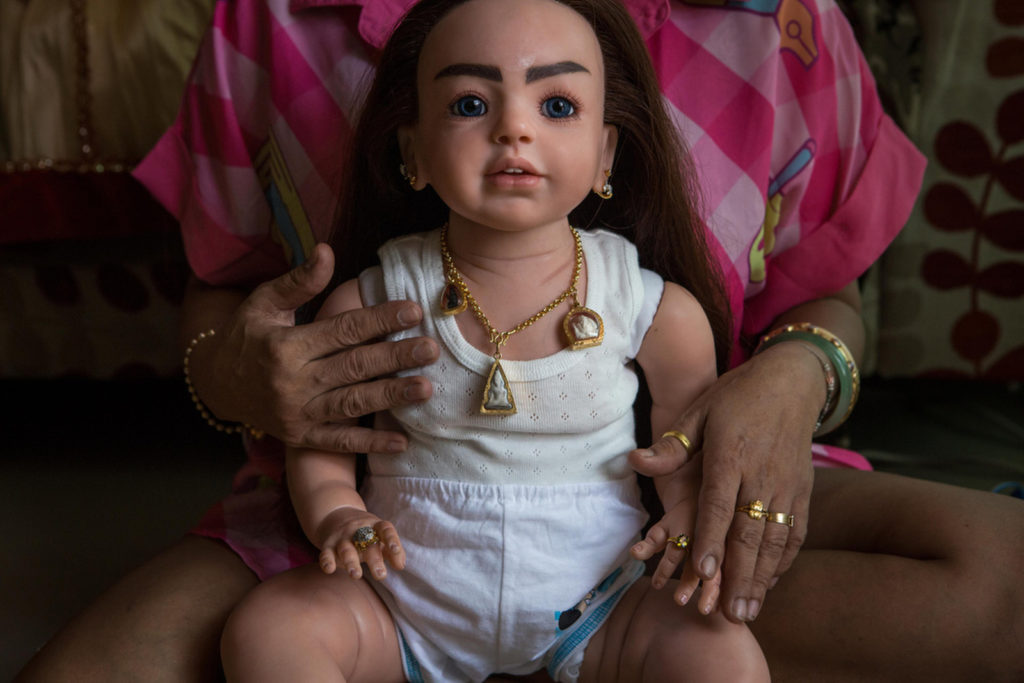 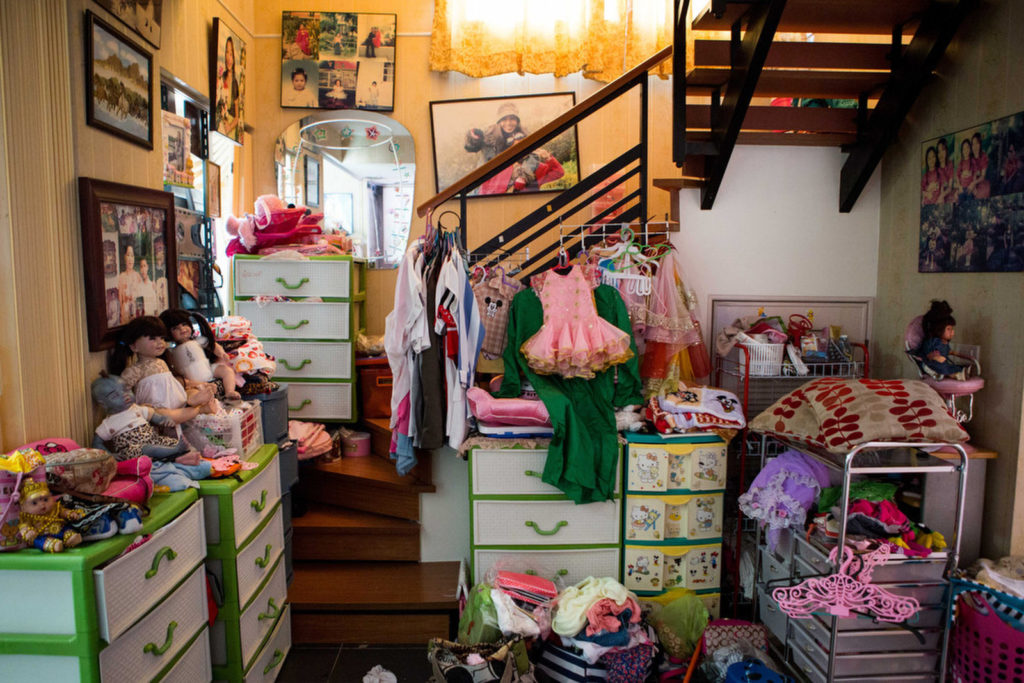 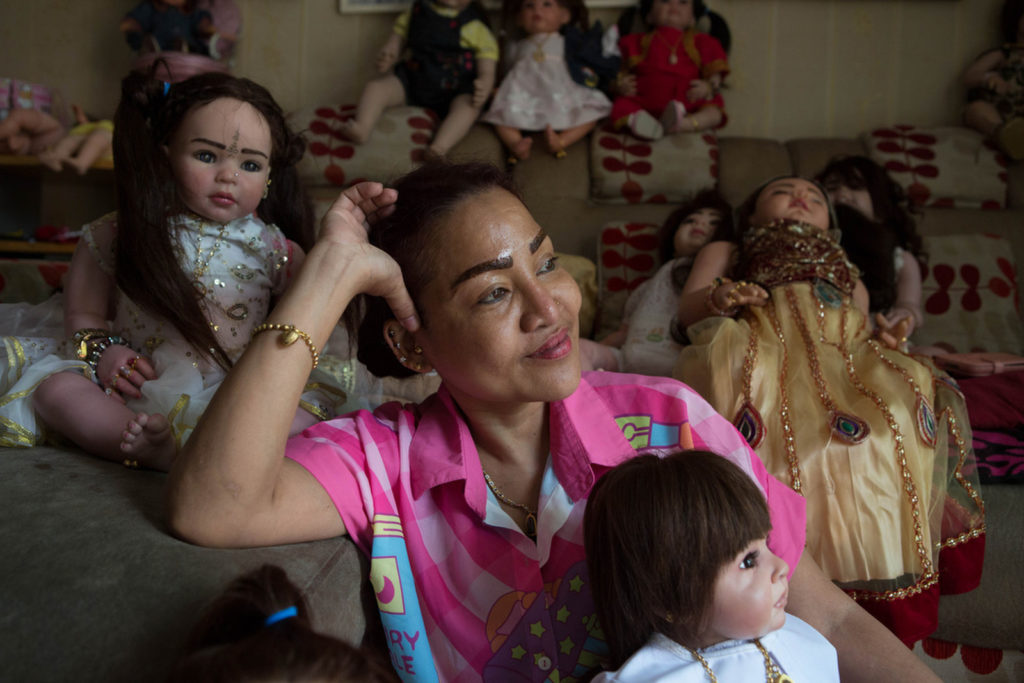 Petch is Thailand’s first known Luk Thep doll – a plastic doll manufactured in the way any doll might be. The only difference being that the doll has a living soul, believed to change people’s lives; in Mama Ning’s case, it was the spirit of her son. One of the earliest mentions of the Luk Thep dolls can be found in a 2015 article on Coconuts.co – an online magazine that publishes a fascinating array of stories from South-east Asia. In an interview with Mananya ‘Mama Ning’ Boonmee, the writer introduces us to the very first Luk Thep doll, created in west Bangkok.

The Luk Thep dolls have since become a large part of peoples’ lives in Thailand and a world-wide sensation. In January 2016, the media almost lost its mind learning that Thai Smile Airways would now permit the purchasing of a seat for a Luk Thep doll. They issued a staff notice, advising flight attendants to treat the dolls like children; owners could also buy the dolls a meal on board the flight. By the time this news made headlines globally, the Thai people were already providing a home to Luk Thep dolls around the country.

Two years before this, the independent photojournalist, Amanda Mustard, had just moved to Thailand from Cairo. She noticed, with time, that there was a gradual increase in the number of people carrying these dolls to markets, restaurants and malls, much like they would a human child. This piqued her curiosity and she began to dig deeper. “There was a massive shift in [the] attitude towards them after that, and they were ridiculed and laughed at in [the] local news,” she told me. Over the course of the year, she began to meet with owners and share some deeply intimate moments with them. This became her photo story, titled, ‘Luk Thep’ Spirit Dolls.

Every family that Mustard met with had their own reasons for ‘adopting’ a Luk Thep doll, but many reasons stemmed from a therapeutic sensibility. Often they brought home a Luk Thep doll to bring financial fortune, to soothe the pain of an empty nest, or to help with addiction. “There’s a ton of superstition in Thailand, and some just kept up with the latest supernatural trends. I wasn’t there to judge, as everyone has their ‘thing’ that gets them through their days.” The more they cared for their dolls, the better their fortune could get.

“Most owners were reluctant to talk cost,” Mustard said, “since the dolls were now ‘human’.” She saw people with cheap plastic dolls sold at a corner toy store, all the way to completely custom-assembled doll for hundreds of dollars. They could be very small, or the actual size of toddler, but usually were somewhere in between. The dolls were also available in higher quality, with human hair and imported parts from the US from companies like Reborn, who produce dolls with as much realism as possible.

In Mustard’s photographs, you notice the touch, between the owner and their Luk Thep doll, often held close to the chest or bundled between their arms. Frames are flooded with their little faces looking out from the image, quietly sitting in the background, or detailed. The families she photographed welcome the gaze as they continue with their daily rituals – in feeding, worshipping, dressing or just resting. At times, one has to look for the doll, they seem woven into the image, blending easily into the gold and yellow that tint each picture, mirroring the religiosity that plagues the many Thai superstitions and practices, some more absurd than others. In one image, the Luk Thep doll is photographed ‘experiencing’ a breeze blowing through her hair, almost life-like. Mustards photographs have a certain quality that could easily place them in a family photo album – they do not impose a voyeuristic gaze, but are moments from the day in the life of a family in Bangkok. In many ways, her approach toward this subject has a kindness that underlies each image. 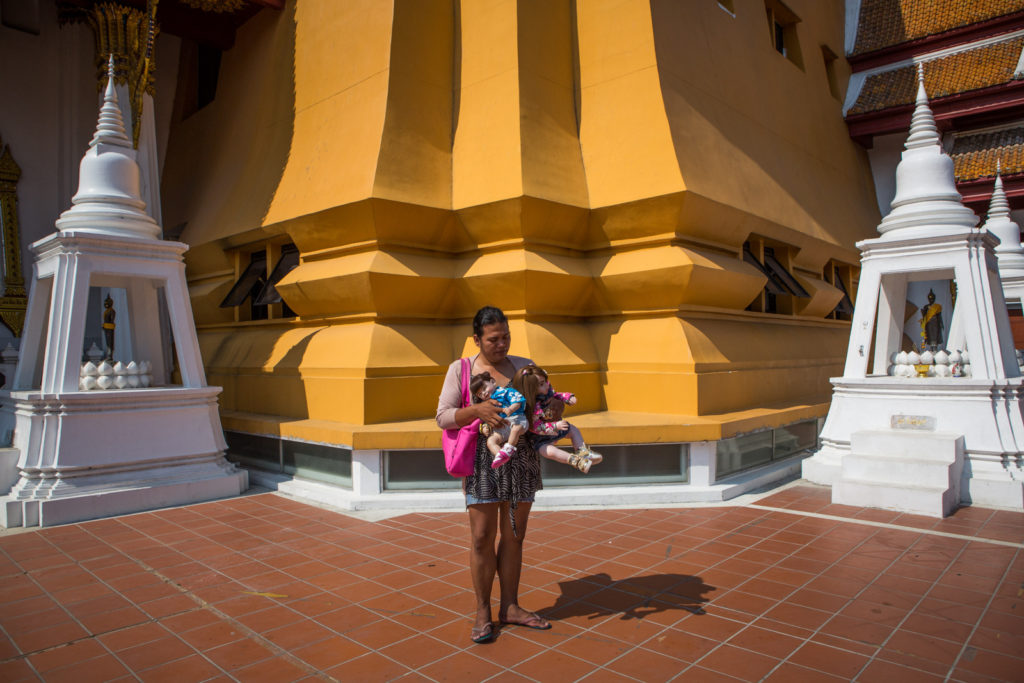 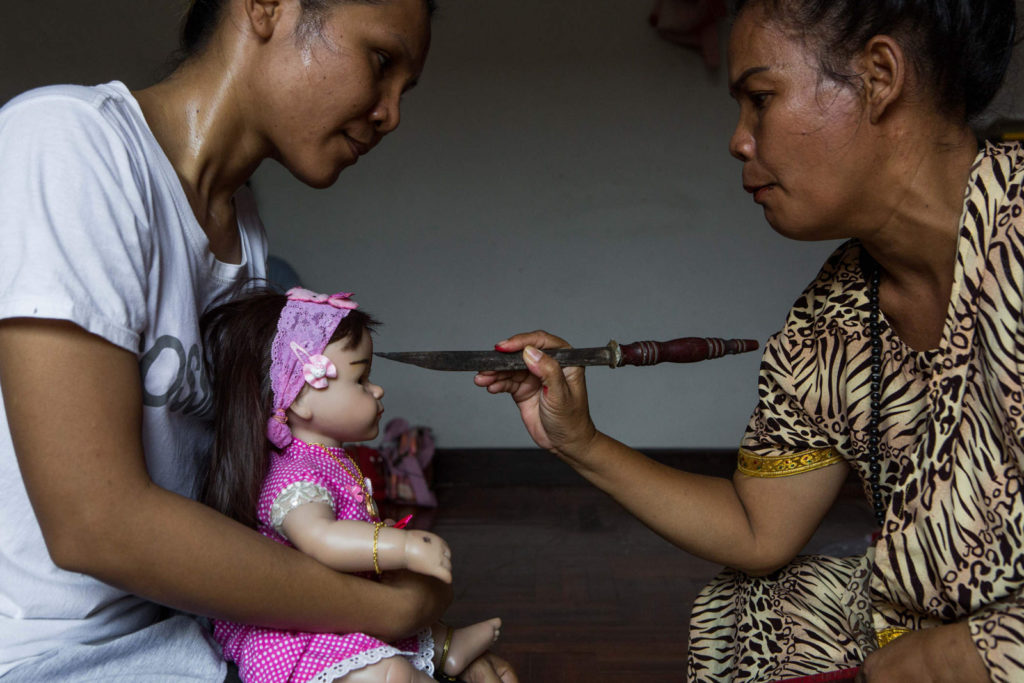 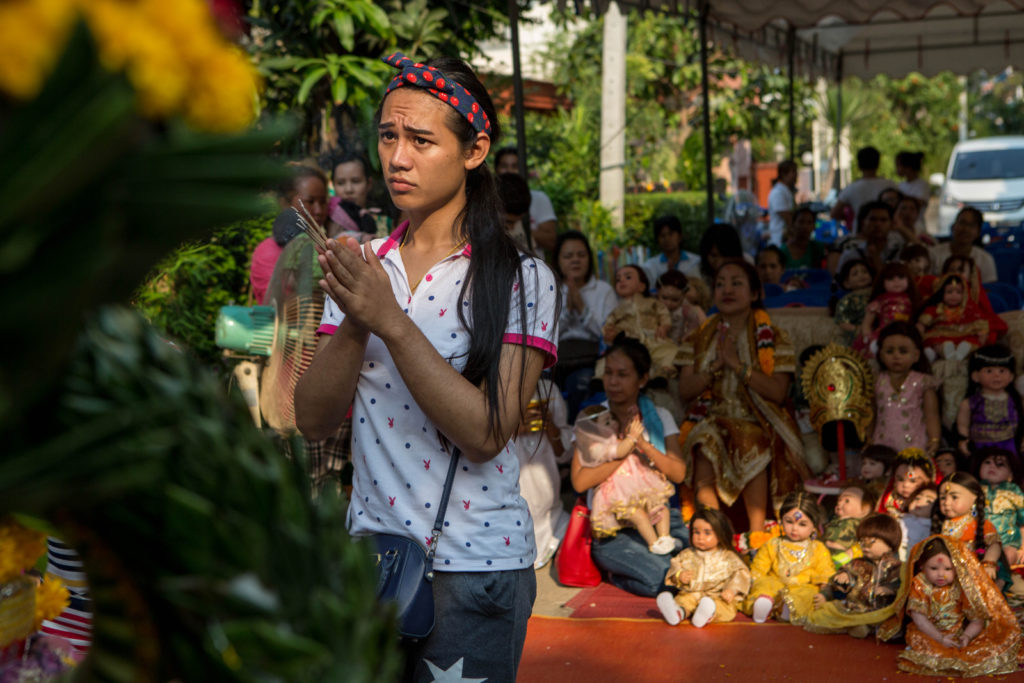 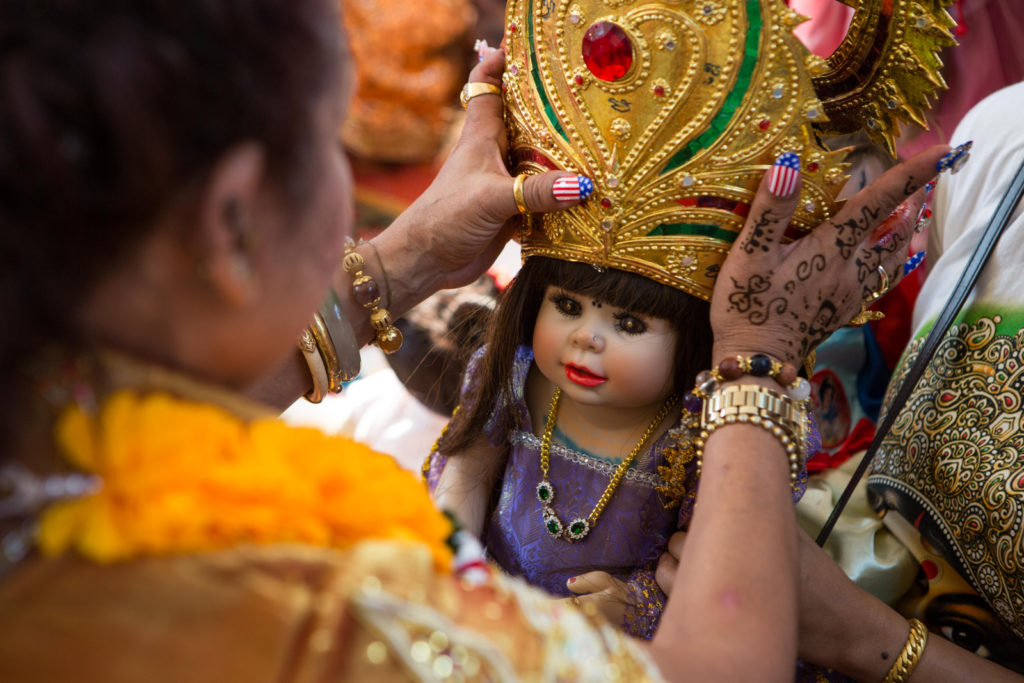 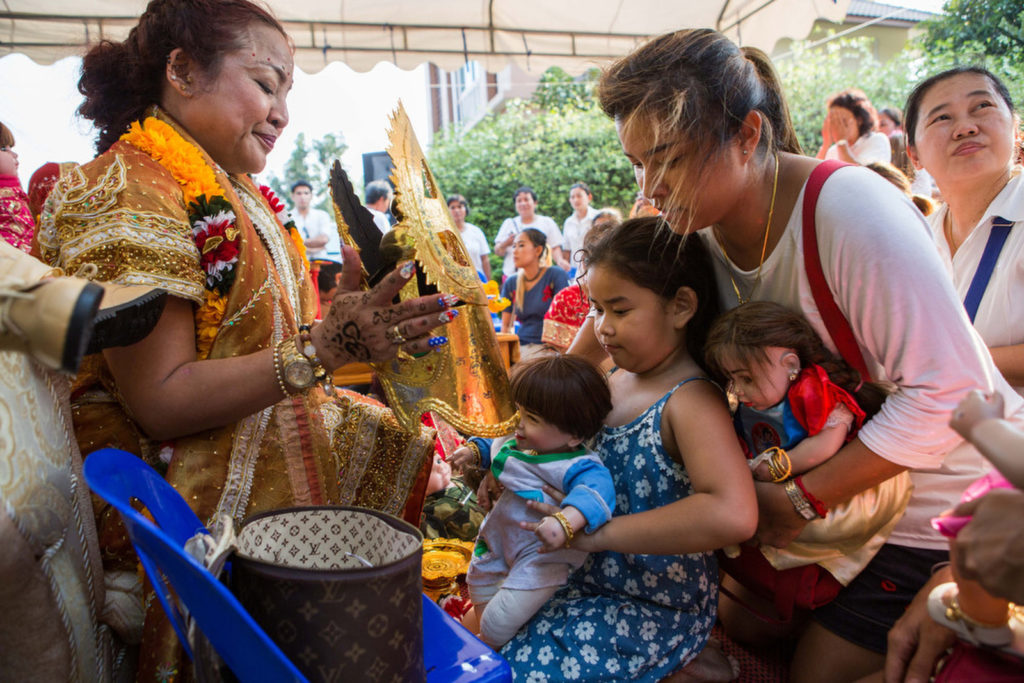 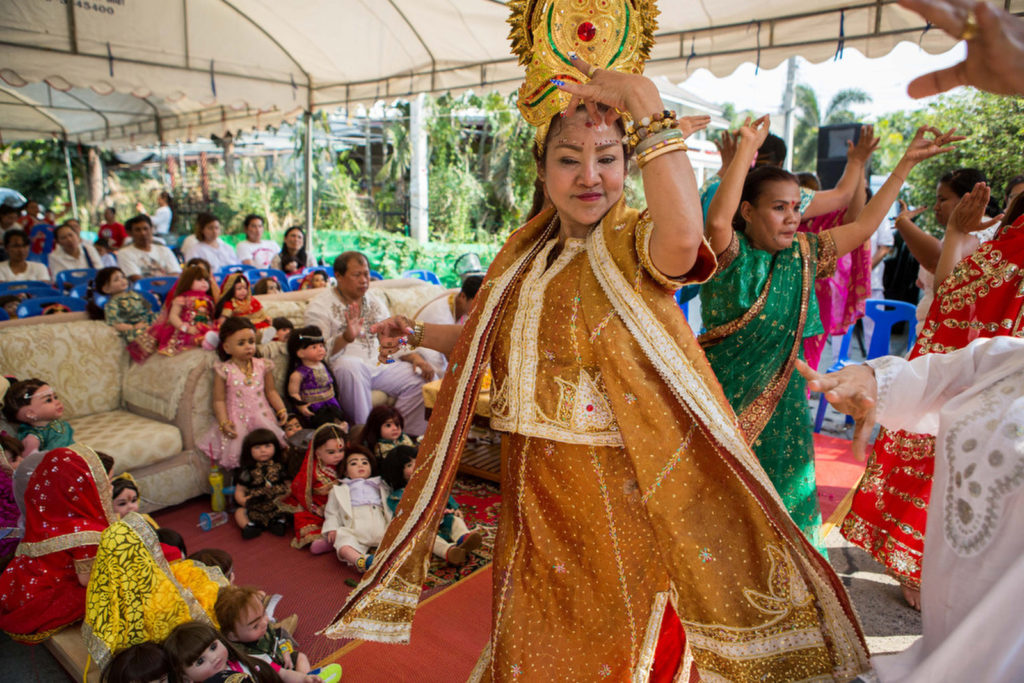 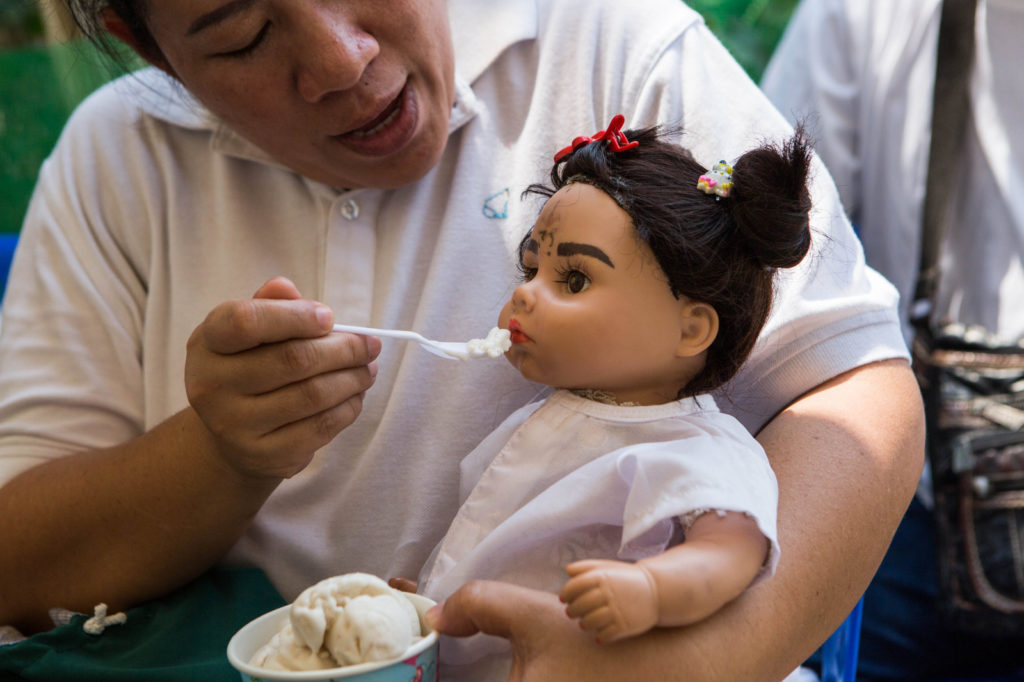 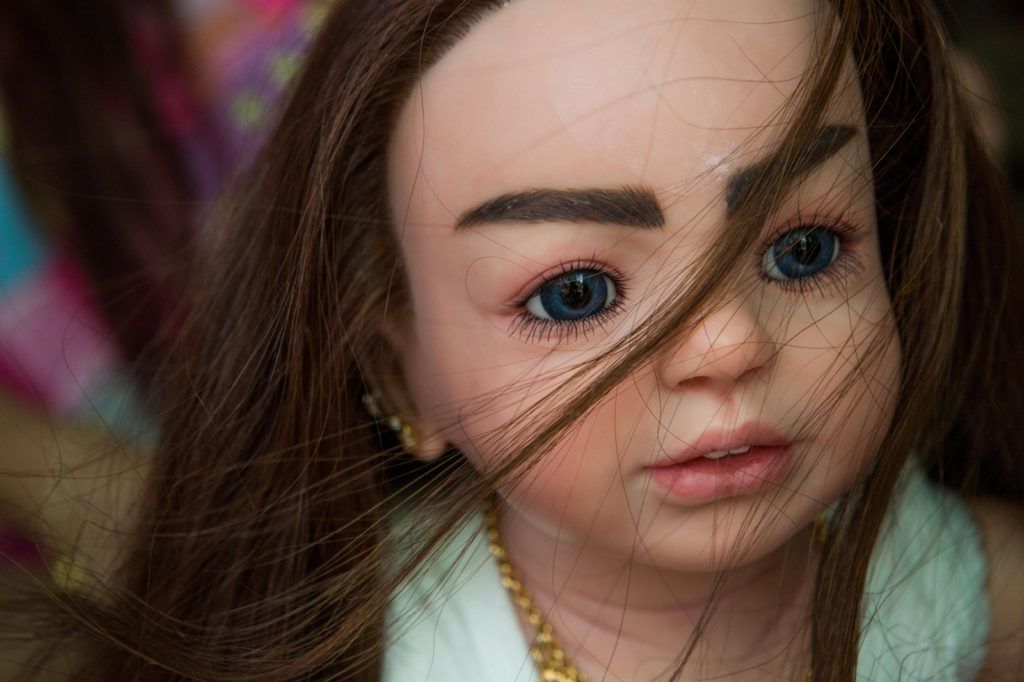 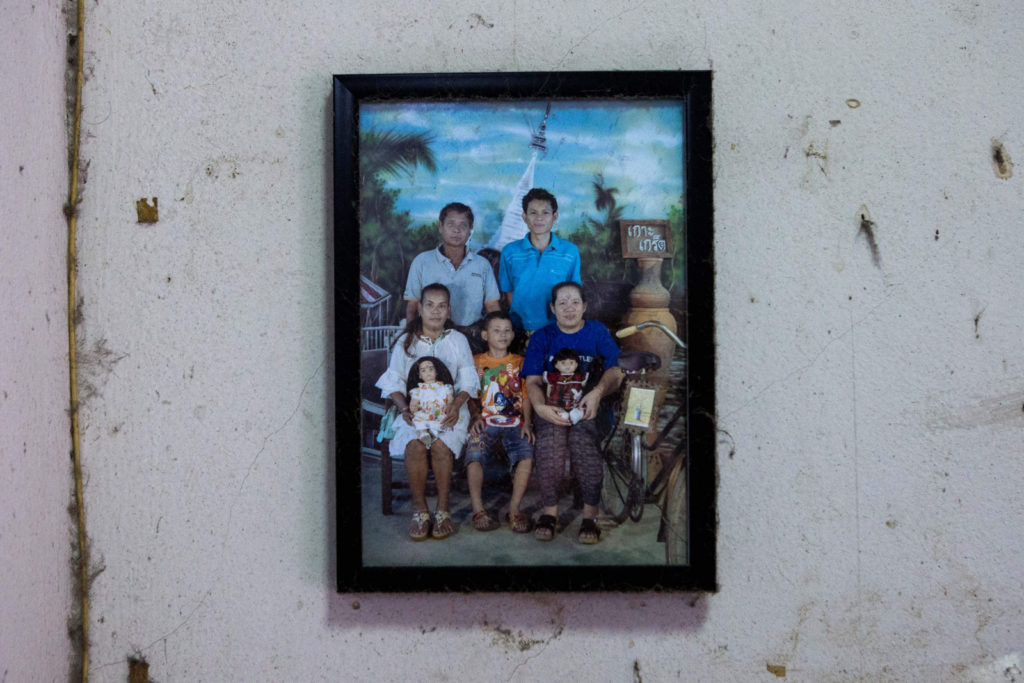