A Rare Look Behind-the-Scenes at Veal and Dairy Farms 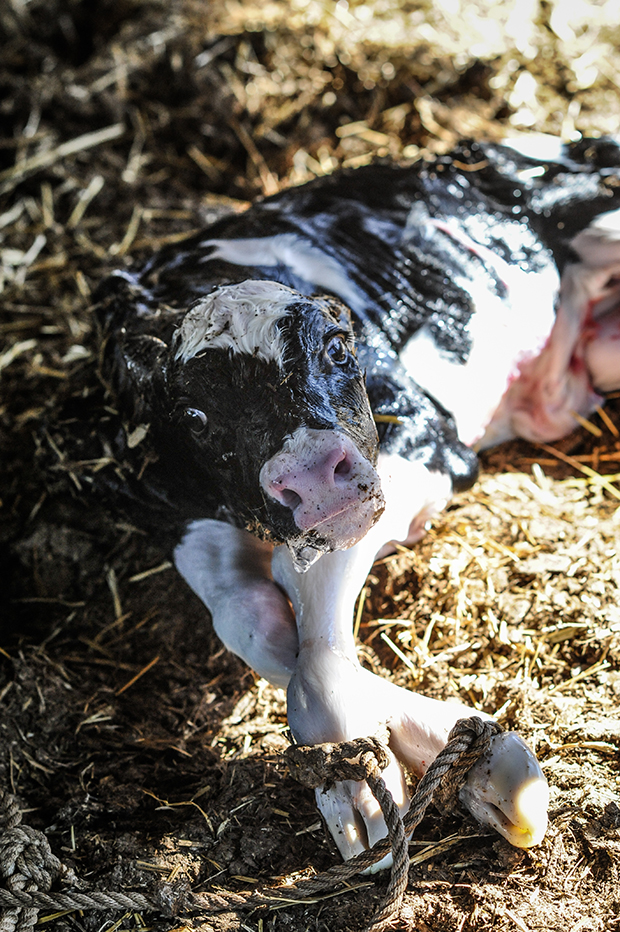 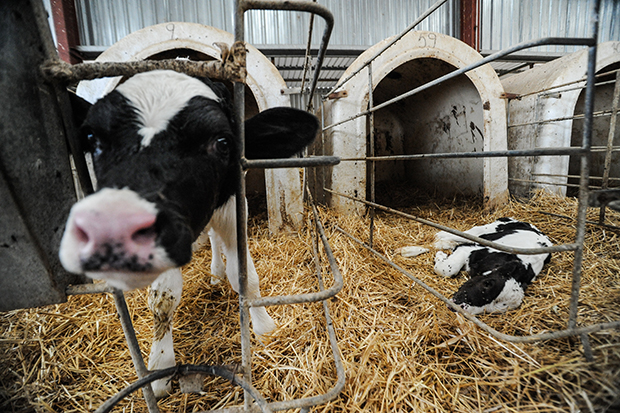 A calf strains his head outside the bars of a crate enclosure while another lies dead next to him. © Jo-Anne McArthur / Animal Equality

In 2010, photojournalist Jo-Anne McArthur took a tour of a dairy farm in Spain. She saw farmers pull a calf from her inside her mother, and when the young cow was just 20 minutes old, she saw the young animal placed in a wheelbarrow and separated from her mother. The farmer named the newborn calf Jo-Anne, in the photographer’s honor.

McArthur visited this organic family farm alongside the animal rights group Animal Equality (Igualdad Animal), and she was given full permission by the owners and workers to photograph the daily lives of the cows.

Dairy and veal farming usually exist side-by-side; some babies, often the males, are given a short life in confinement before being killed for veal. While they are alive, they will be crated, unable to run or to play. Many of the females, on the other hand, will grow up and will be used to produce milk for human consumption, like their mothers were.

Those who become dairy cows will have a longer life, but for McArthur, that’s often the worst destiny of all. A dairy cow will be inseminated about three to five times in her first three to six years of life. She will pay a large physical toll.

The emotional toll is harder to quantify. When a calf is born, the mother cow licks her off and nuzzles her body for a brief period of time, generally a few minutes or hours. After this, the mother and baby are separated. Evidence suggests that mother cows, like humans, bond to their young. Female cows sometimes follow their calves as they are taken. McArthur has seen it herself.

In some cases, cows have been reported to moo and call after their children. There are also incidents of mother cows, on their second, third, fourth, or fifth baby, attempting to hide their young from humans for fear of losing them.

Sadly, one calf died when McArthur was at the farm near Madrid. She doesn’t know exactly what happened, but the baby was too sick and weak to shake off the flies that landed on her body. By the time she succumbed to illness later that day, she was covered.

Although cows in farm animal sanctuaries can live into their thirties, dairy cows are usually sent to slaughter when they are unable to produce large quantities of milk. This usually happens between the ages of three and six. People in the industry use the term “spent” to refer to a female cow whose body can no longer keep up with the demand for milk.

In the end, McArthur says, “This is the price of a glass of milk or a piece of cheese.”

Back in 2010, McArthur wasn’t able to find out what would happen to the cow who was named after her, but she has since learned that Jo-Anne became a dairy cow and not a veal calf. When I asked the photographer how Jo-Anne the cow was doing these days, she responded, “She’d be dead now. She would have been killed.”

McArthur has witnessed hundreds of thousands of animals in terrifying situations. When she thinks about the individual creatures, like Jo-Anne, whom no one was able to save, she says she doesn’t quite know how to grieve for them. The only way she can cope with the past is to hold fast and work towards a kinder future.

This post is the third in a series of seven stories we will be publishing about photojournalist Jo-Anne McArthur and the We Animals Archive. Read the first one on pig farming here, and the second on fur farming here.

Hundreds of pictures from the We Animals Archive are available for free to charitable and educational organizations.The project relies on donations from the public. Make a one-time donation here, and if you’re interested in contributing monthly, you can do so here. Find the book We Animals here, and find McArthur’s new book, Captive, here. 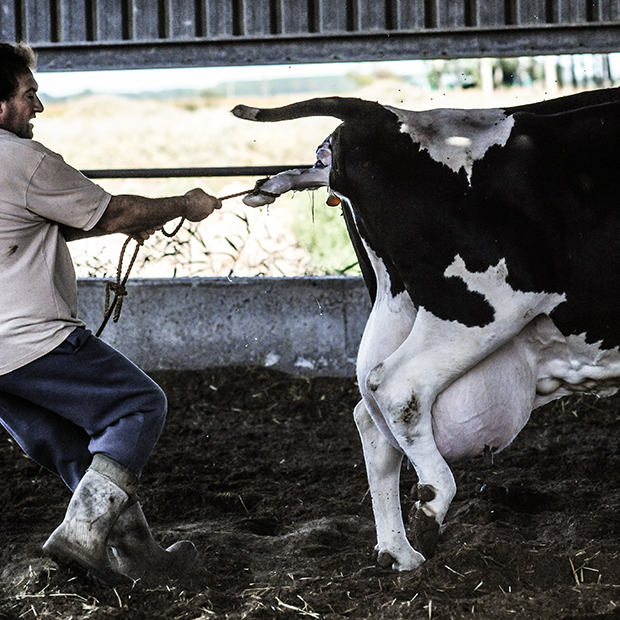 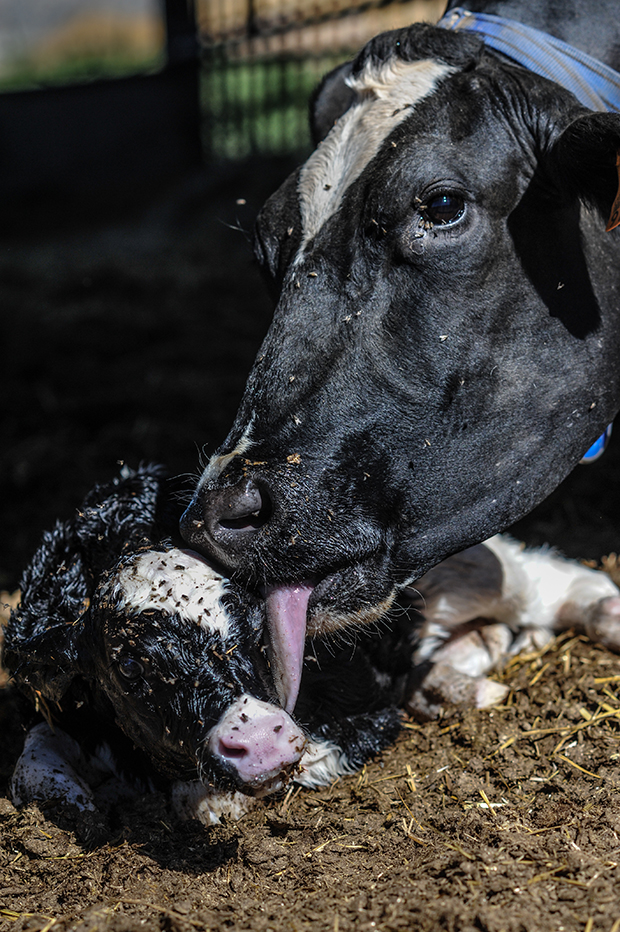 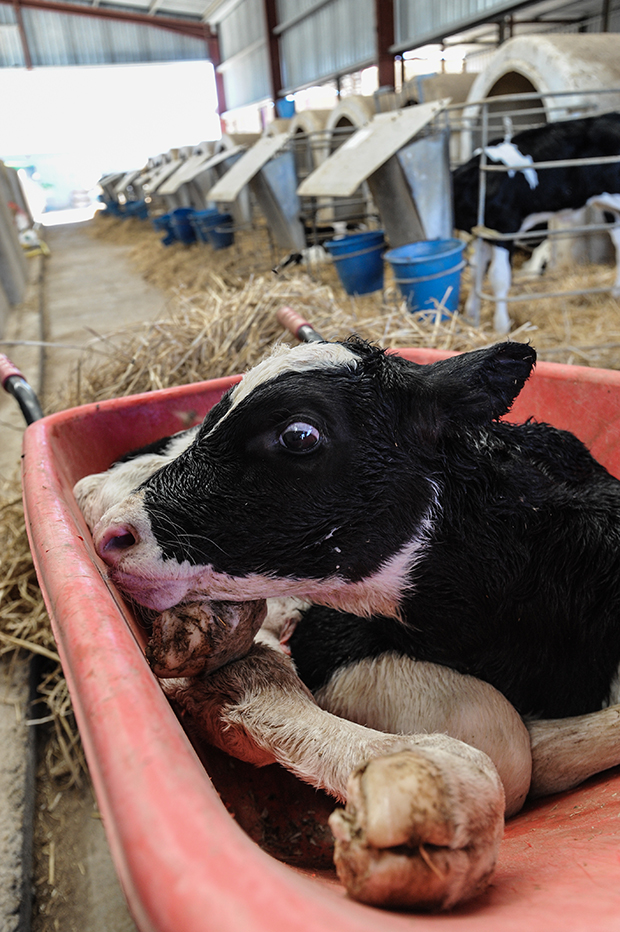 A wide-eyed calf looks around at her new life. © Jo-Anne McArthur / Animal Equality 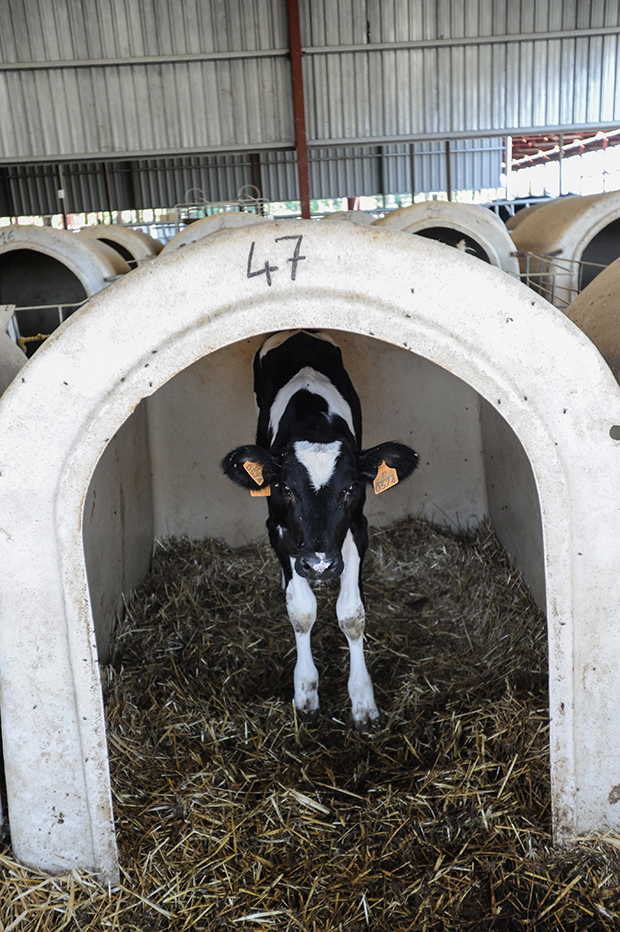 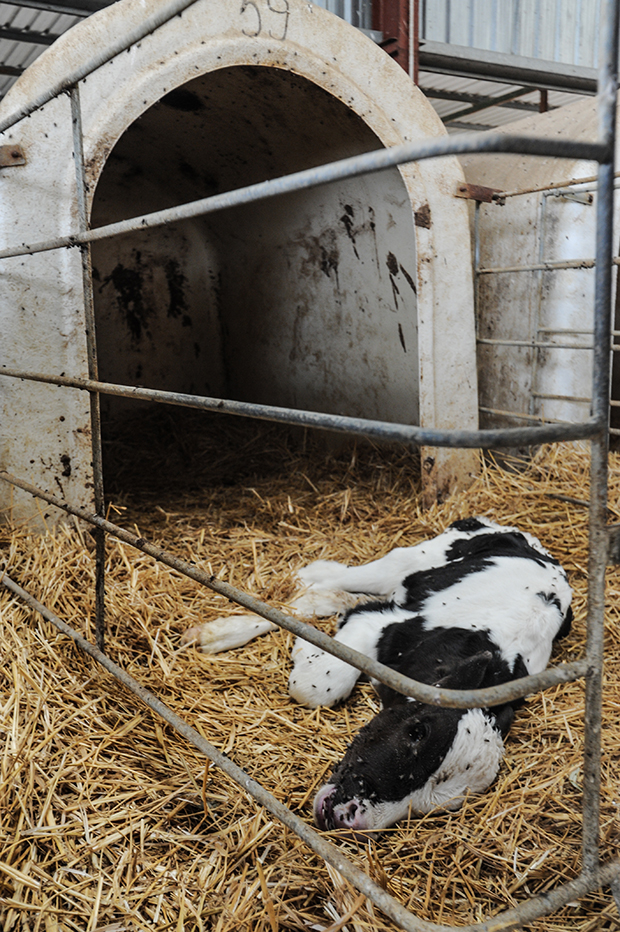 A small calf dies of sickness outside his crate. © Jo-Anne McArthur / Animal Equality 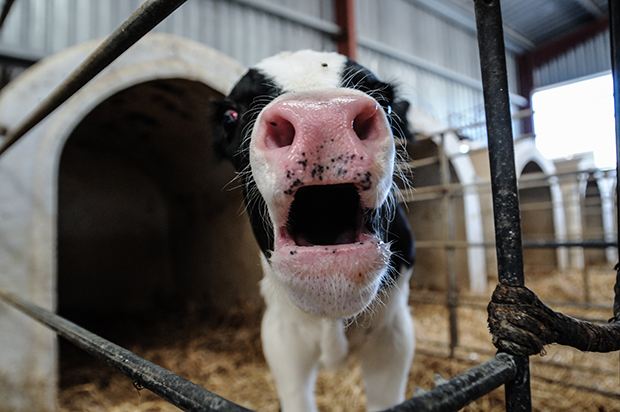 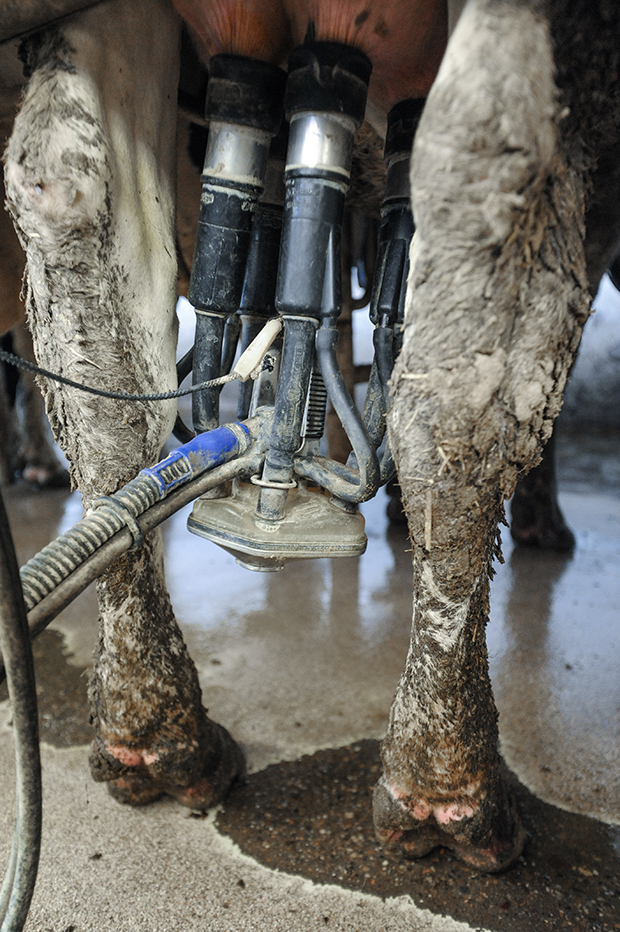 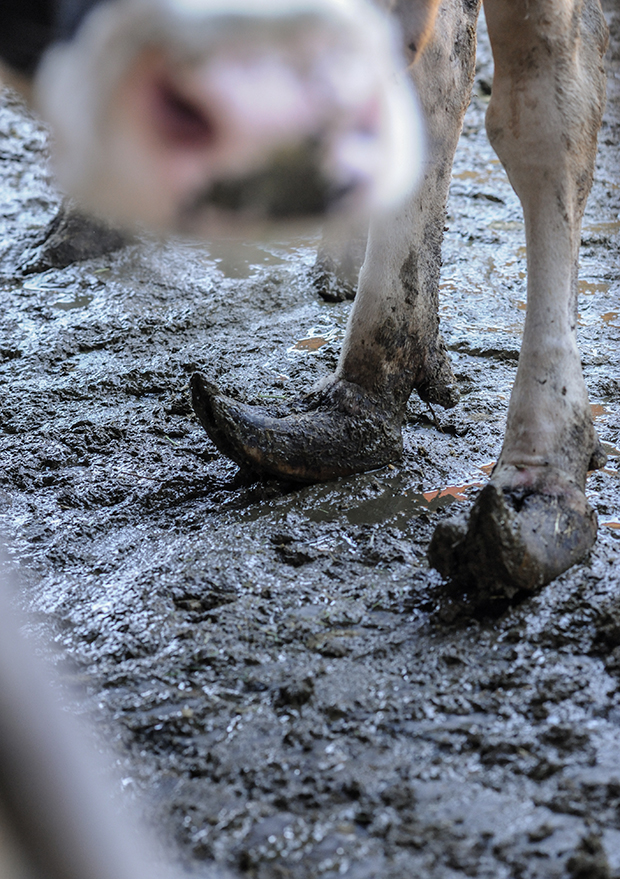 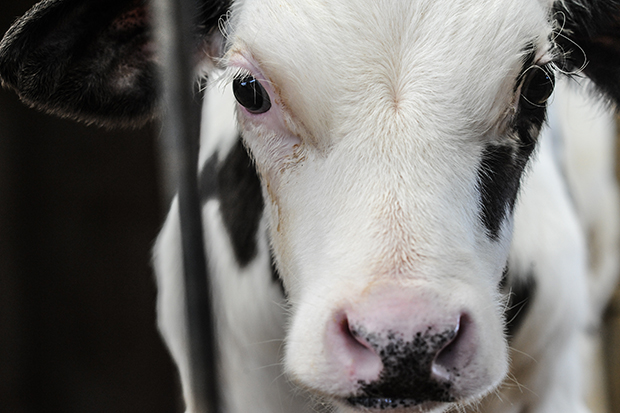