Hanged, Stabbed and Abandoned: the Horrific Fate of Greyhounds in Spain 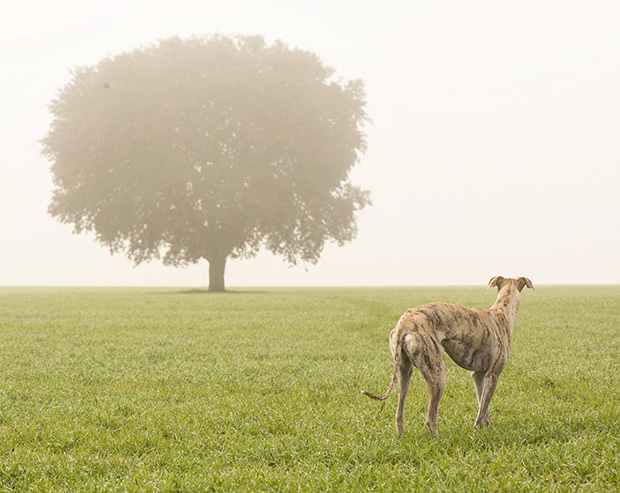 It is not difficult to find people who remember that, after the hunting season, galgos were hanged, rotting in the sun, in dozens. Nobody took them down, they were nobody, and weeks would pass. 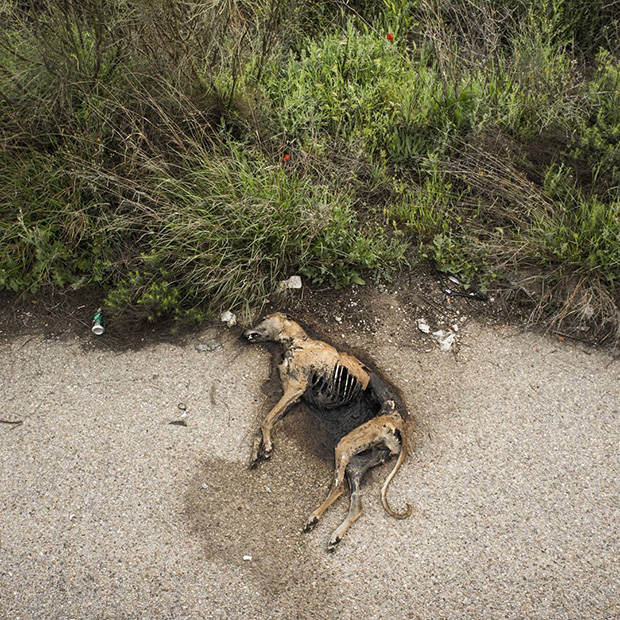 All galgos go to heaven. That might be true. But it is a real hell what many galgos live on earth. Individuals left alone, invisible. Trained, traded, stolen, bred and killed in ways I wouldn’t believe were true when I started the film. Or maybe I didn’t want to as it was too hard to acknowledge that collective failure. A society that allows so much cruelty dressed in a sport robe, in tradition and ritual. Galgos are hung, stabbed, burnt or abandoned to die.

Filmmaker Yeray Lopez Portillo has a Spanish greyhound named Bacalao. She rides with him on a cargo bike everywhere he goes. “In a way, she saved my life,” he says, referencing a period of depression she helped him overcome. As it happens, he probably saved her life too.

Every year, somewhere between 50 and 100 thousand dogs just like Bacalao are abandoned or killed. Some estimates place that number at 200 thousand. When hunting season ends, the greyhounds, known as galgos in Spain, are hanged from trees, dropped down wells, and left by the side of the road without access to food or water.

Portillo calls it “a yearly genocide,” and most people turn a blind eye. Owners remove the dogs’ tracking chip so they can’t be found, and many dogs die somewhere along the countryside without ever being found.

Three years ago, the filmmaker made the trip to Spain to meet a galguero, or breeder. There were six puppies, and Bacalao was the only girl. He took her home to Denmark, where he was living at the time, but he never forgot about her brothers. When he returned to Spain, he tried to track them down without any luck.

“Most of them are probably dead,” Portillo says, “Many of the male galgos are discarded when they are puppies, in favor of their sisters who run faster and whom they can breed off.”

With his own dog in mind, the documentarian set off to make Yo Galgo and tell the story of the Spanish greyhound. For the film, he spoke with galgueros, who bred the animals for hunting, as well as rescue organizations, who take in neglected and abused animals, provide them with medical treatment, and try to find them loving homes.

Once they are saved, the dogs have a hard time getting adopted. One rescue in the film took in a thousand dogs, and some remained for years.

The making of Yo Galgo has been emotional for Portillo. He’s met dogs who have been stabbed, burned, and run over by cars. Some could not be saved. He’s wept over footage, and there have been times he considered stepping away from the project. The dogs and the people who care for them always brought him back.

“The things that I have seen will make you question what kind of world we are living in, when there are humans capable of doing these things to defenseless animals,” the filmmaker writes. But these dogs have also taught him something about forgiveness. The dogs he met were gentle and kind, and some went on to become therapy dogs in hospitals, helping humans to cope with trauma.

A year ago, while Portillo was working on the documentary, he got a call about a puppy who was found forsaken with the trash. He agreed to take the dog for a few days, but after meeting her, he couldn’t let her go. He adopted her. The puppy, named Tzatziki, has become a best friend to Bacalao.

“I have many times asked myself what would have happened to Bacalao if she wasn’t with me,” Portillo says. Yo Galgo is his way of answering that impossible question.

Hunting season ends in February, meaning thousands upon thousands of dogs will be abandoned this month. Today is World Galgo Day.

To support Yo Galgo, spread the word about what’s happening to the Spanish greyhound. Donate to the film via PayPal or purchase items at passingpanda.com. All proceeds go towards the making of the film. “My hope with this documentary is to make a difference for the galgos and also other hunting breeds,” the filmmaker writes. Find more details here. Stay updated via the Yo Galgo Instagram. 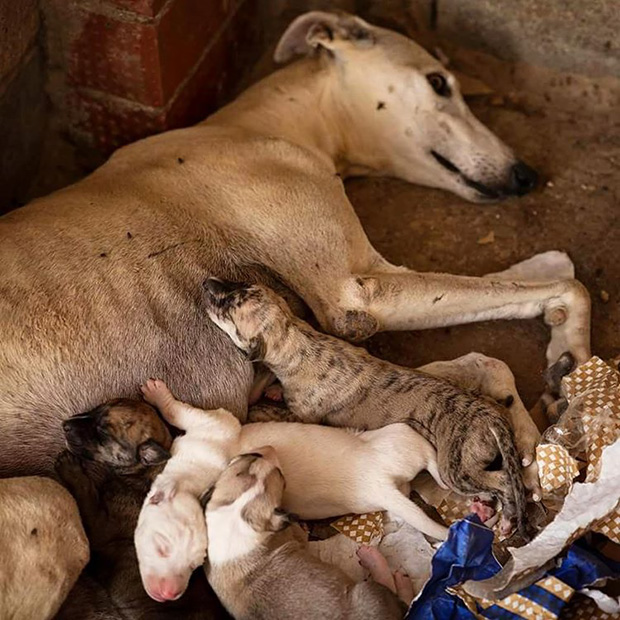 Bacalao was the only female in the litter. Here, the film started, and I fell in love with sighthounds forever. 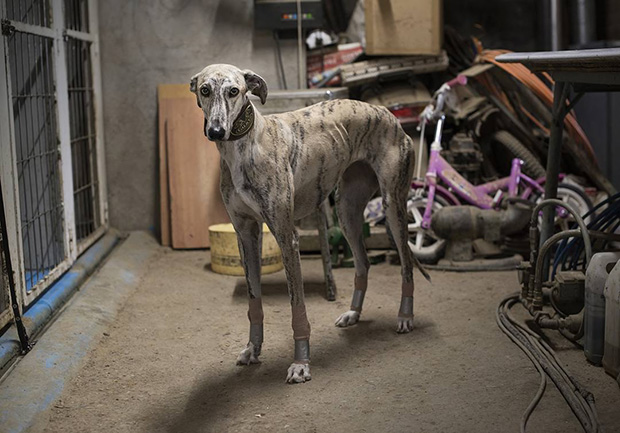 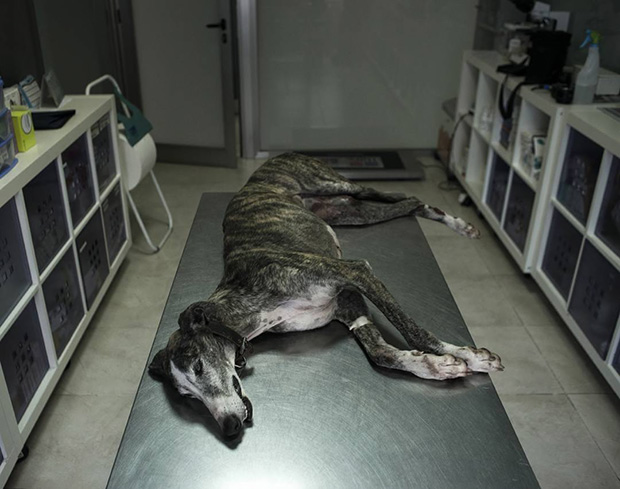 She was very weak when when I got there. She was hit by a car the night before, and there was little the vet could do. Her owner wouldn’t come. “Keep her,” he said on the phone. She didn’t survive. 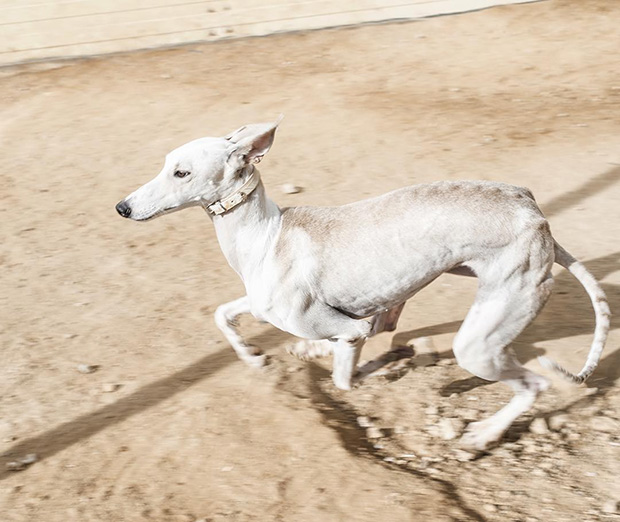 She was curious, fast, but impossible to touch. She reminded me of the galgo my sister rescued. It took me more than a year before she allowed me to get close. 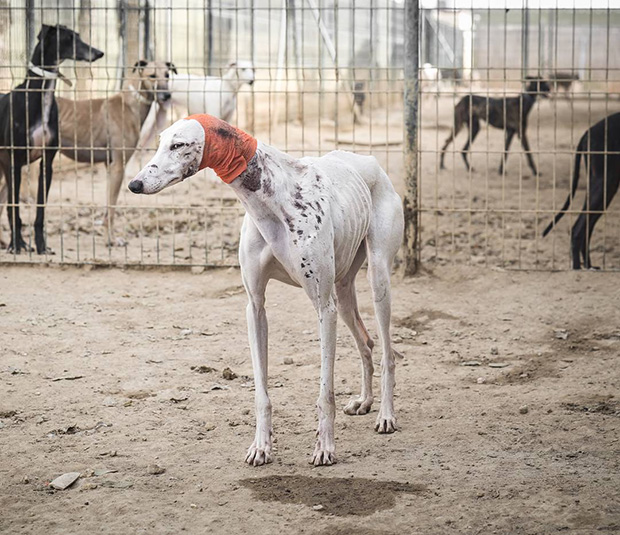 Although rescue centers do a great job allowing galgos to have a second chance, covering areas where the public administration should be, I wish for the day in which they are no longer needed. The more I travel for the film, the more I see that massive breeding is a critical factor in this equation. These centers have finite resources, but they have become an easy way to dispose of galgos that are not wanted anymore. It is a very dangerous circle. 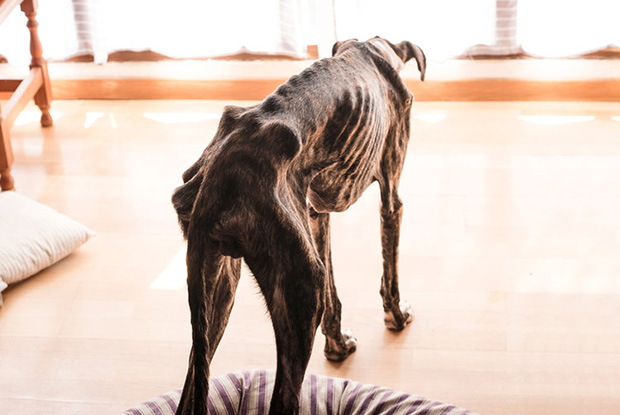 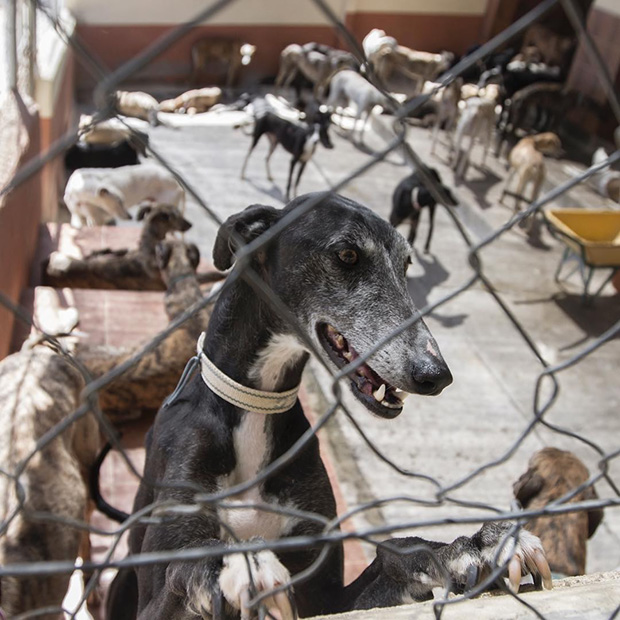 This photo sums up pretty well what is happening in many rescue centers in Spain right now. They are overcrowded with discarded galgos and also podencos. And every single year, the situation repeats itself. 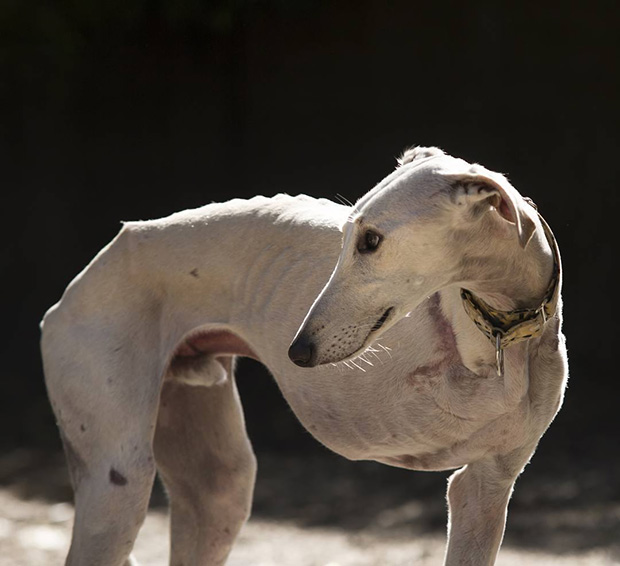 I feel compelled to tell the story of Arlo, a Galgo taken from a public perrera by a young couple. Arlo had been there for two days with no medical attention, bleeding, infected and weakening quickly. His right leg was gone and in the left one most of the skin had been taken away too, showing the bone in a strange manner. He had bites all over the body, big ones, and he was very afraid. Arlo was the first galgo used in sparring that I saw alive. He was lucky to be found by this couple who patiently work on his recovery.