Portraits Reveal a Subculture of African American Cowboys (and Girls) 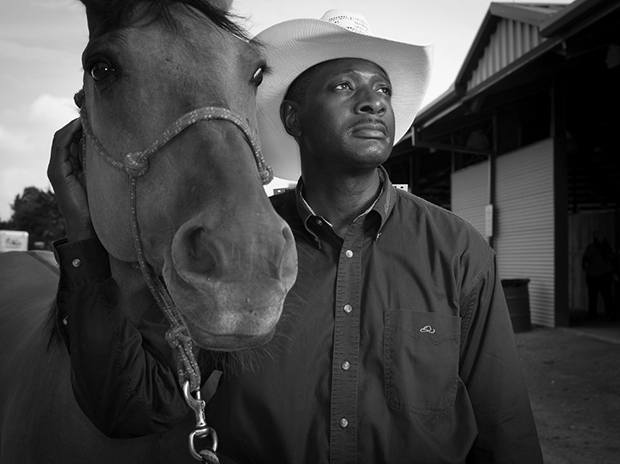 Derry L. Pierce traveled from Sauk Village, IL to the Bill Pickett Rodeo in Atlanta, GA on August 2 & 3, 2014. Derry is a police detective, and this was only his third rodeo. He planned to compete in calf roping. 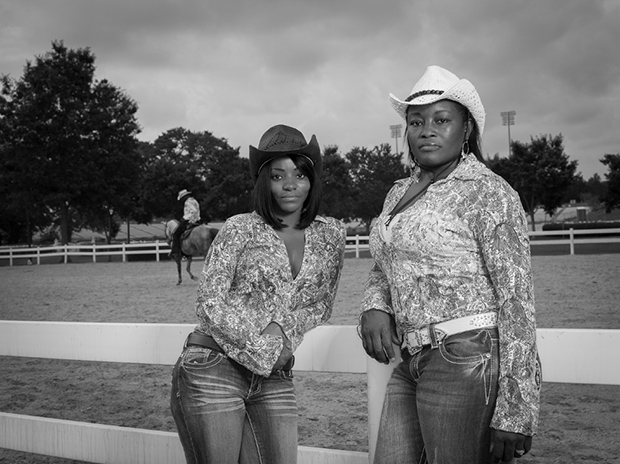 Melissa Ellison is a nurse, and Melissa Brown works in accounting for a forest products company. They’re trail riders and were attending the Bill Pickett Rodeo in Atlanta, GA on August 2 & 3, 2014.

Atlanta-based photographer Forest McMullin stumbled across African American cowboy culture by chance when a student of his mentioned her husband’s love of horses and rodeos. Throughout the country, he explains, individuals and communities are working to preserve the oft-overlooked history and heritage of the “black cowboys,” the men and women of color who are responsible for much of the country’s Western expansion. With Black Cowboys (and Girls), the photographer hopes to contribute to the unraveling of centuries of storytelling and media coverage focusing solely on the figure of the white rancher, illuminating the forgotten histories of generations of African American families.

On the same night that he first heard about a local rodeo dedicated entirely to African American enthusiasts, the photographer embarked on his own research, learning to his astonishment that as many as a quarter of the individuals who tamed the Wild West were black cattle herders and ranchers who had been erased from the textbooks and made white for films depicting the era.

In the place of the historians and the filmmakers, ordinary citizens have told their own stories by organizing rodeos showcasing the talents of black horsemen. Beneath the surface, McMullin discovered an intricate network of black men and women working with equines through trail riding groups and community programming. From there, he went on to photograph onsite at the Bill Pickett Rodeo in Atlanta and Memphis, founded in 1984 and named after the first person of color to join the Rodeo Hall of Fame, as well as the Southeastern Rodeo Association, LLC in Birmingham.

The rodeos, notes McMullin, captivated him from the start, but it wasn’t only the athleticism of the riders and their horses and the excitement of events like roping and barrel racing that kept him yearning for more. The people themselves, he says, were unfailingly warm and open. Not one has turned down his request to sit for a photograph and share a piece of their personal and cultural history. After each event, he takes down every person’s contact information so that he can send them the file of their portrait as a gift. Often, his sitters will post the images on their social media networks.

The bond between the horses and these people, suggests McMullin, runs deep, even if it hasn’t been acknowledged or recognized by the masses. These are athletes who have put their hearts and souls into their animals. 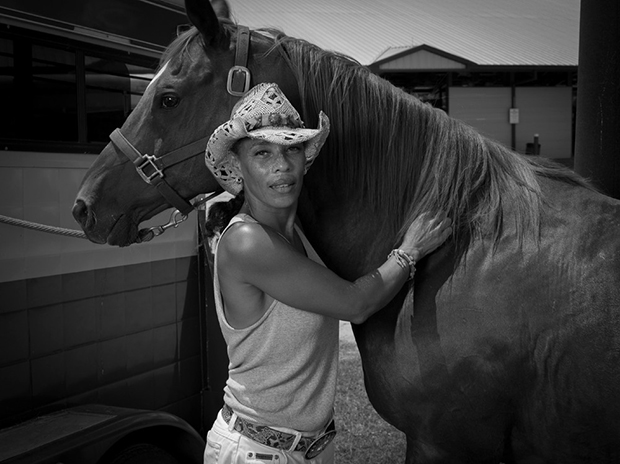 Rennae Isles is a rider from Canton, OH. She had recently arrived in Atlanta looking for work as a driver in the film industry. She was attending the Bill Pickett Rodeo in Atlanta, GA on August 2 & 3, 2014. 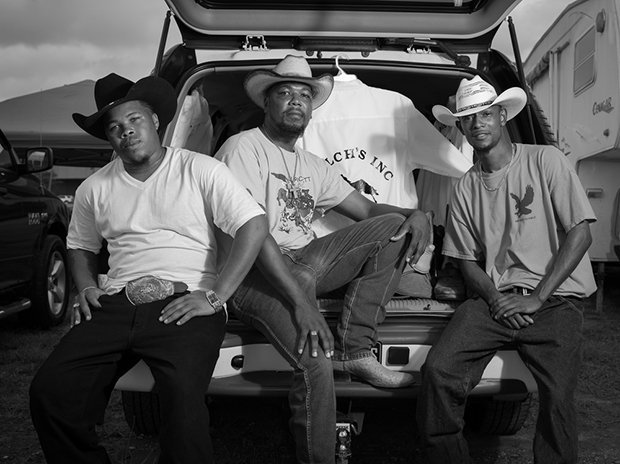 L-R Quentin Welch Jr., Rico Welch, DT Welch. Quentin and DT work for Rico on his horse farm near Talladega, Alabama. They were photographed when they attended a rodeo in Birmingham, AL on June 27, 2015. 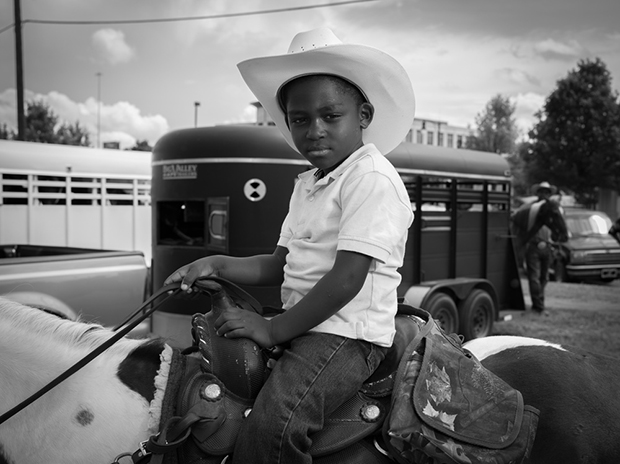 Joseph Green was attending a rodeo in Birmingham, Alabama on June 27, 2015 with his parents. 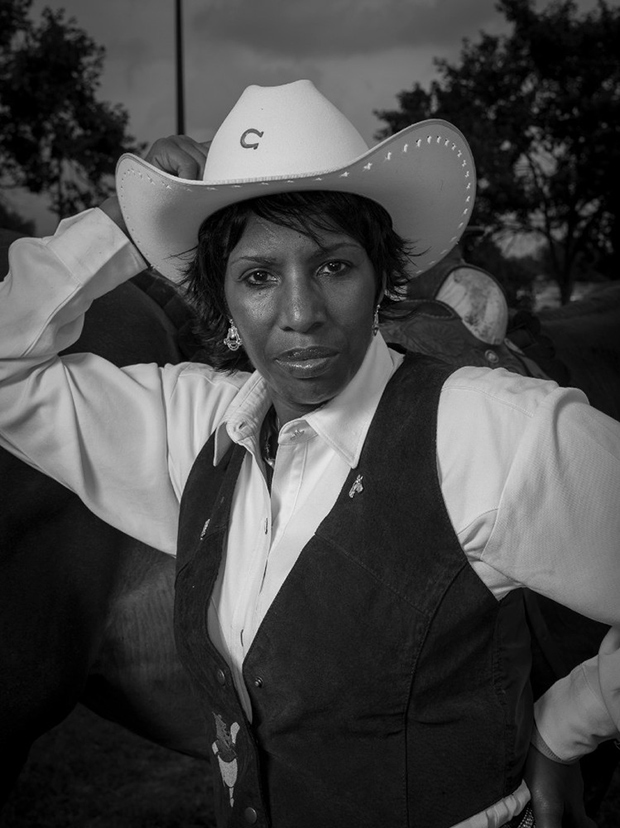 Sharon Darden is an avid trailer rider and would be riding in the grand entry at the Bill Pickett Rodeo in Atlanta, GA on August 2 & 3, 2014. 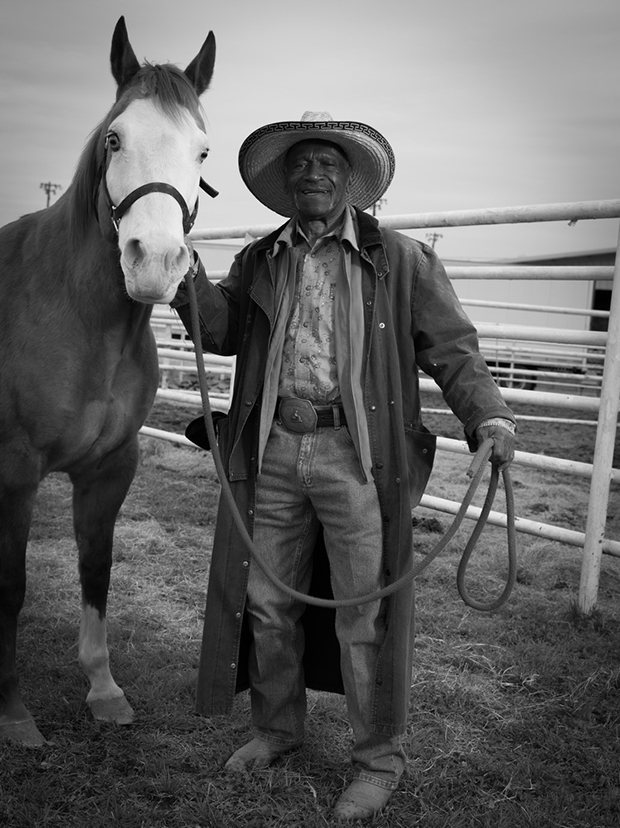 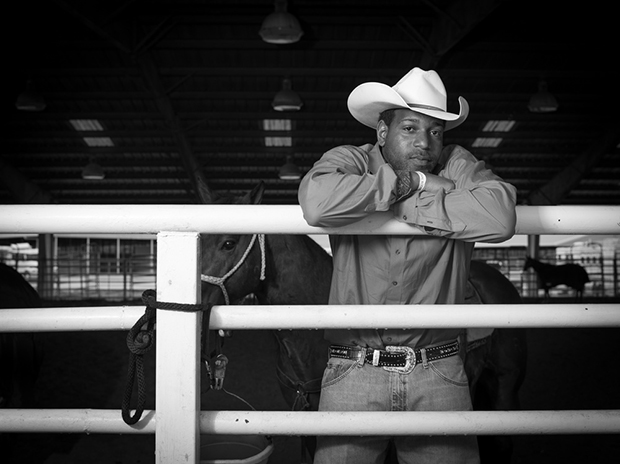 James Taylor from Tulsa, OK has been competing as a steer wrestler for twelve years. He was photographed at the Bill Pickett Rodeo in Memphis, TN on March 28, 2015. 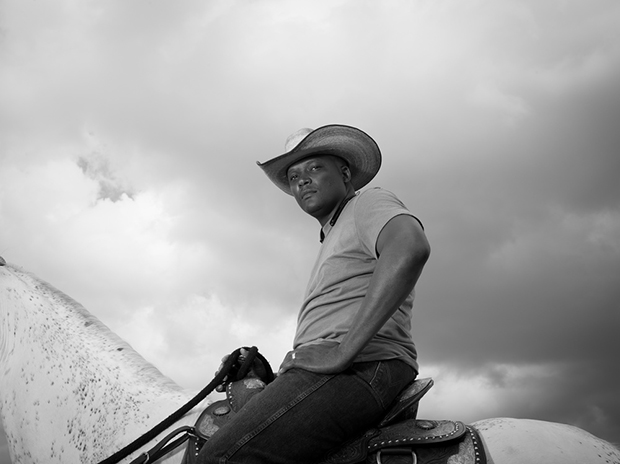 Todd Morris is the communications manager for the SE Rodeo Association, promoters of the rodeo in Birmingham, Alabama on June 27, 2015. 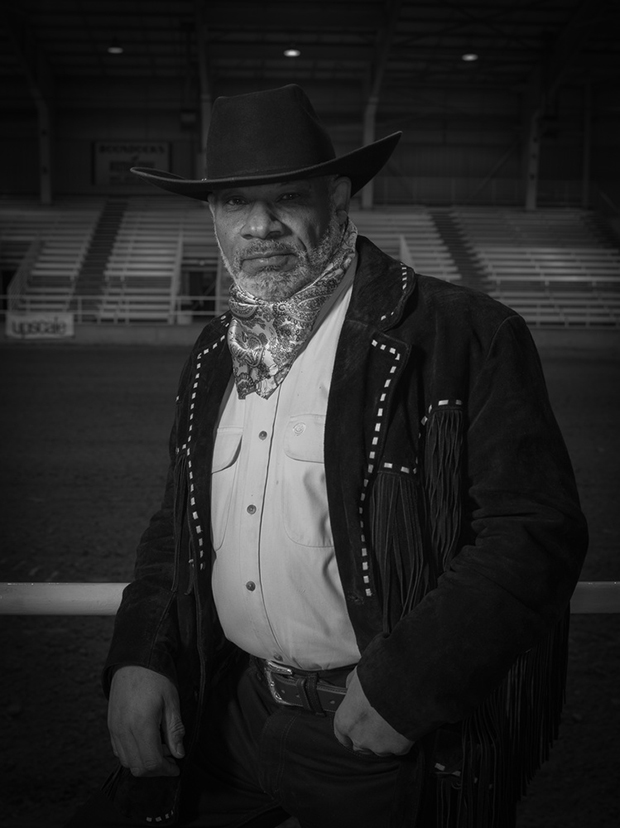 Bruce Clark, AKA “Doc”, AKA “Doc Holliday,” rides his Tennessee Walker with the Sunset Saddle Club in Memphis, TN. He was photographed at the Bill Pickett Rodeo in Memphis, TN on March 28, 2015. 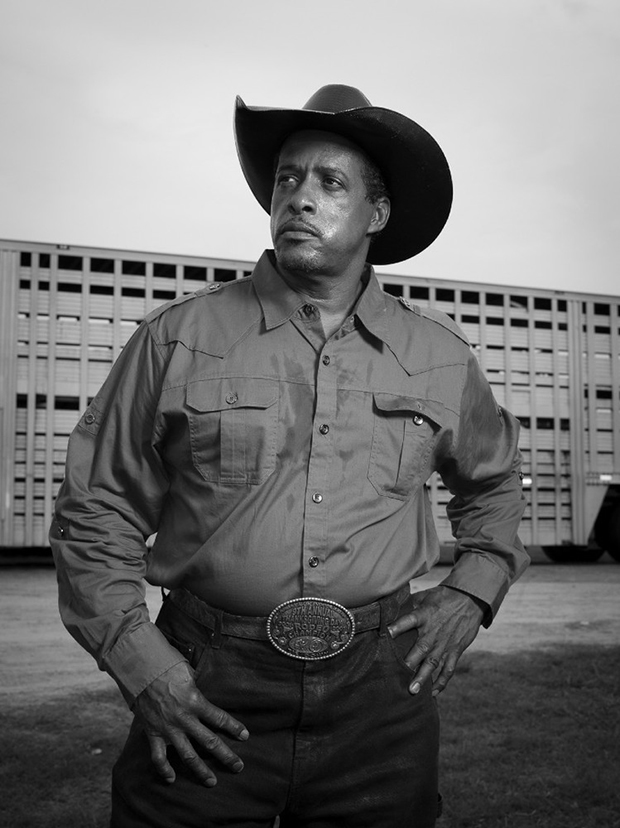 Darrell Thomas’ father founded the Anahuac Saltgrass Cowboy’s Association in Texas in the 1960s as an all black rodeo group. Darrell rode in rodeos for 16 years, competing in bull riding. He now lives in Atlanta where he works in construction. He was attending the Bill Pickett Rodeo in Atlanta, GA on August 2 & 3, 2014. 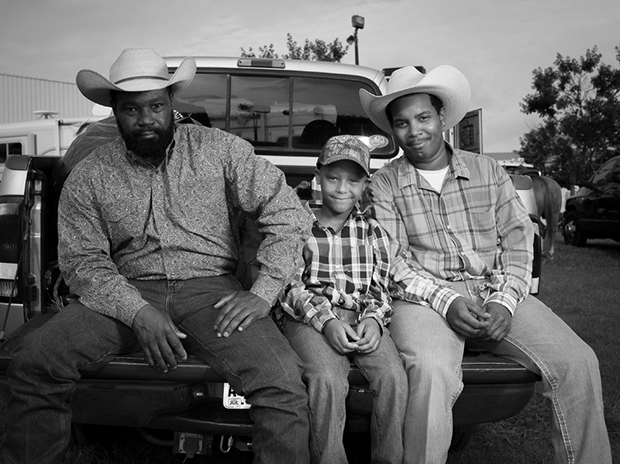 Thad, Tyler, and Thaddeus Heard are three generations of cowboys. Thad, a retired fireman, has been riding in the rodeo since 1994 in the steer wrestling competition. Thaddeus is a cook at Waffle House and plans to start competing in the rodeo when Tyler is a little older. They were photographed at the Bill Pickett Rodeo in Atlanta, GA on August 2 & 3, 2014. 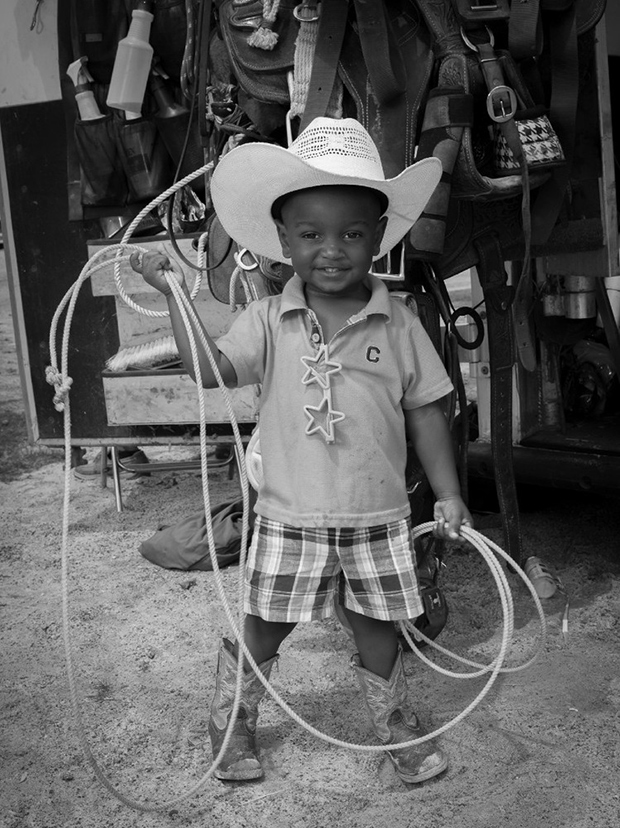 Harrel Williams Jr. is two years old. He traveled with his family to the Bill Pickett Rodeo in Atlanta, GA on August 2 & 3, 2014. His parents both compete in the rodeo, and Harrel is learning cowboy skills already.