Portraits Reveal the Bodies of the Heavily Tattooed 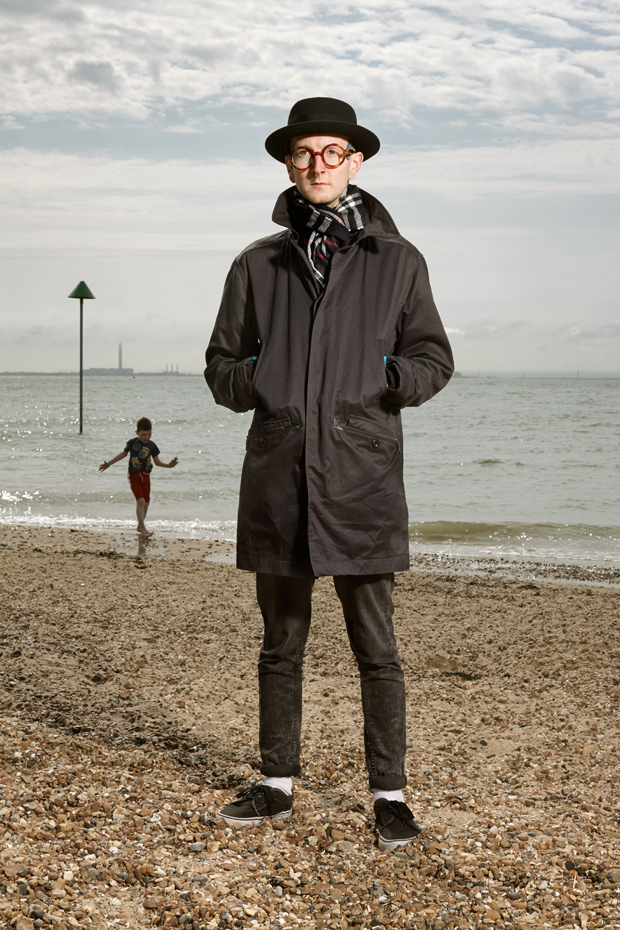 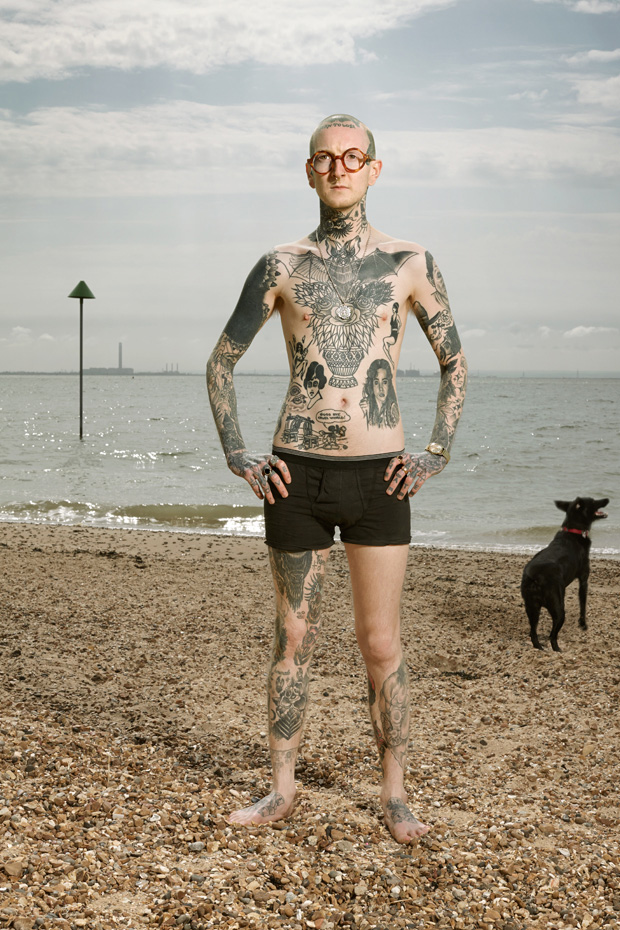 “I was 17. I hid the first few from my parents for many years and by the time they found out they knew this was going to be my life.” Philip, 27, Southend-on-Sea

For some of us, says British photographer Alan Powdrill, our skin isn’t simply the largest organ of our bodies but “an ever-changing canvas” that can be transformed and molded with ink. COVERED is his homage to those who take this idea to an increasingly popular extreme, adorning their flesh with a tapestry tattoos before secreting them behind layers of clothing. The character of each subject is revealed in two images— one dressed, and the other bared— that together paint an often contradictory but never inconsistent portrait of a single person and his or her story.

Though Powdrill himself has no tattoos (yet), he admits that body art has always held for him the irresistible allure of things unknown, rebellious, and daring. Over the past years, notes the photographer, tattoos have moved from the realm of the outcast or outsider to embellish the bodies of one in five British citizens. An estimated two thousand parlors operate throughout the United Kingdom. Powdrill met his subjects at tattoo conferences and via social media; once word spread, he found dozens of people eager to expose the intricate designs penned across their bodies. All were shot outside the sitters’ own houses.

What astonished the photographer most about working with serious tattoo enthusiasts was the financial and physical sacrifices each made to have the ink of their dreams. Hours of excruciating pain and countless funds went into the creation of the pieces, and all felt that the expense was worth it. One of his subjects, a thirty-something woman named Victoria, had previously had two complete body suits, each of which had then been removed by laser, a process even more agonizing than the inking itself. At the time of her portrait, she was in the process of getting her third, meaning that the new ink would go over the scars of her first two.

While Powdrill acknowledges that the contemporary photography world is in many ways fixated on the tattoo trend, he hopes to cut through the superficial glamor and pizazz of the art form to touch on something more essential about what it means to be inked. The question of whether the nude or the covered figure is more vulnerable or “real” remains ambiguous, allowing each figure to be revealed only through the doubled portraits. These tattoos all mean something; they aren’t simply ornamentation but an assertion of selfhood and independence. In some cases, they serve as an act of defiance, while in others, they become memorabilia of important events, places, and people. Together, they tell the tale of a life, allowing their wearers to trace their histories long after their flesh begins to age, allowing for the tattoos to evolve with each passing year. 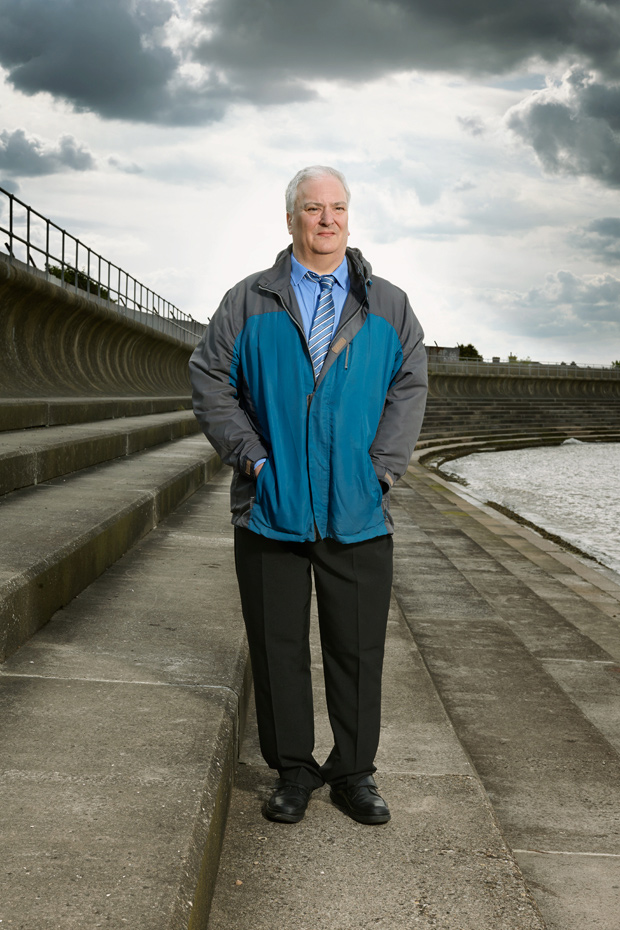 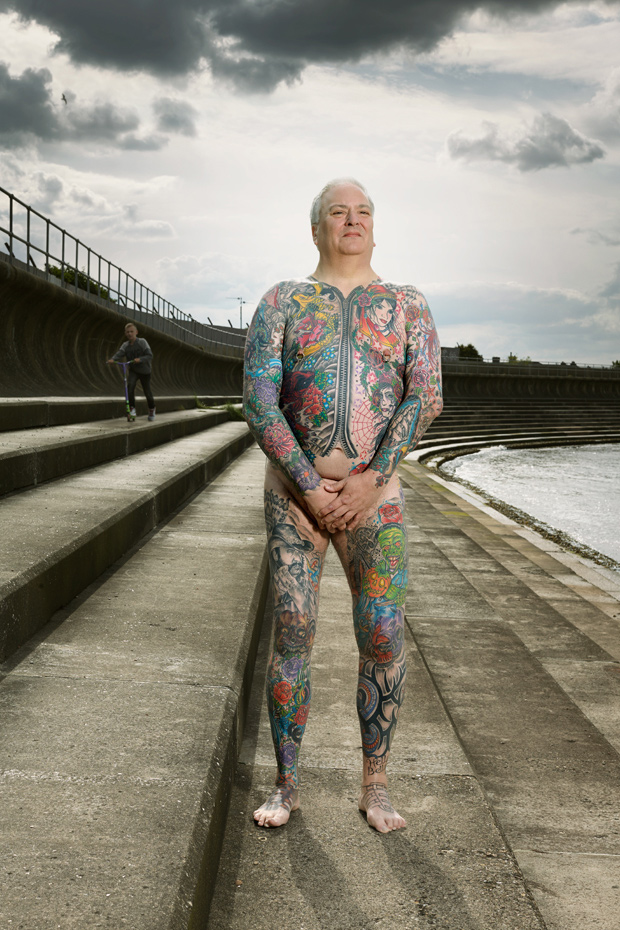 “I was 51 when I started and my father was already dead and my mum didn’t say anything as she was in the early stages of dementia” Graham, 58, Cleethorpes 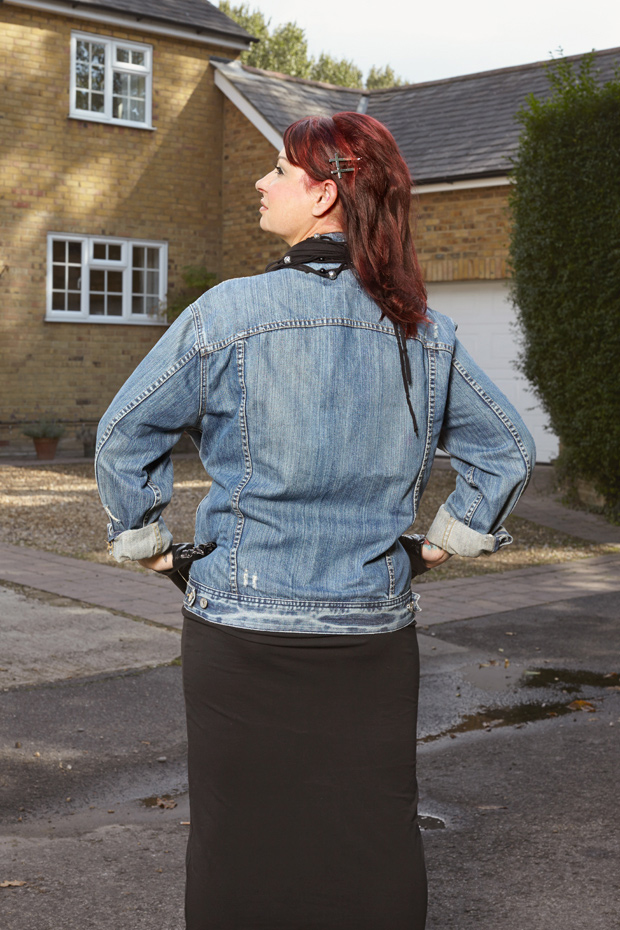 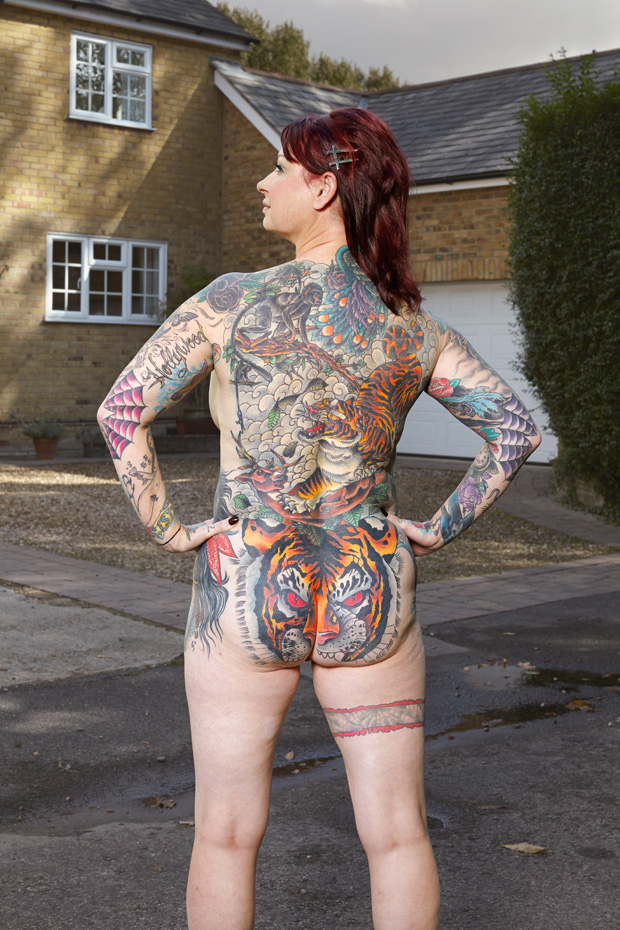 “I love being different and everyday I’m asked about them. Good tattoos aren’t cheap, cheap tattoos are not good.” Izzy, 48, Maidstone 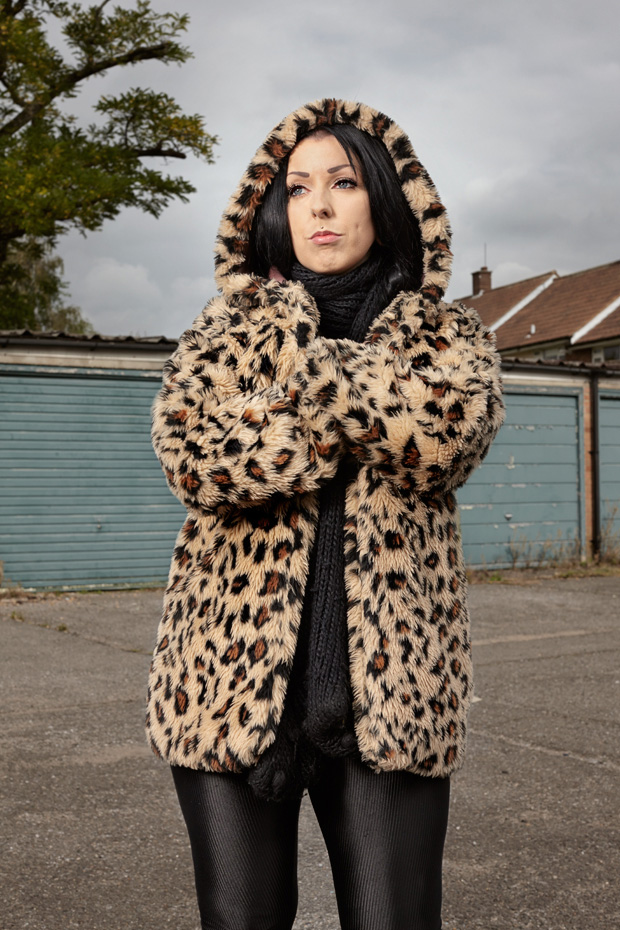 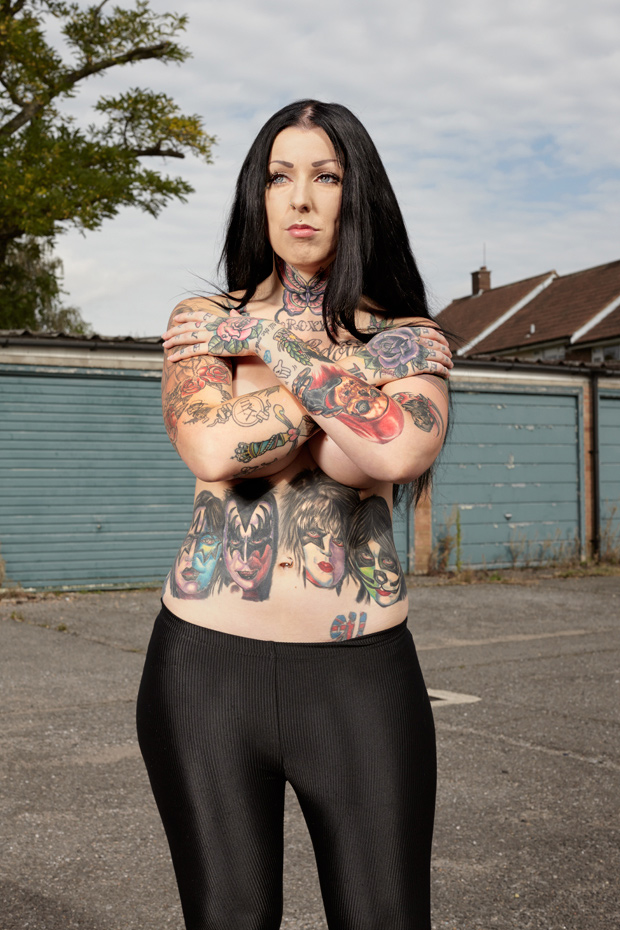 “My Kiss tattoos are my favourites, the pain was incredible but it feels good to show my ultimate dedication to the band.” Kimmy, 29, Ruislip 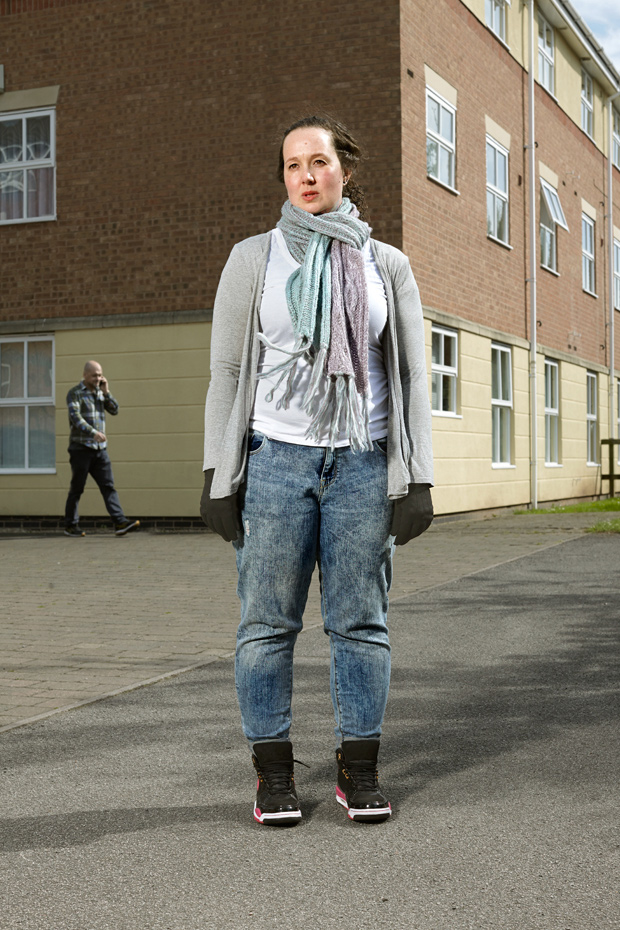 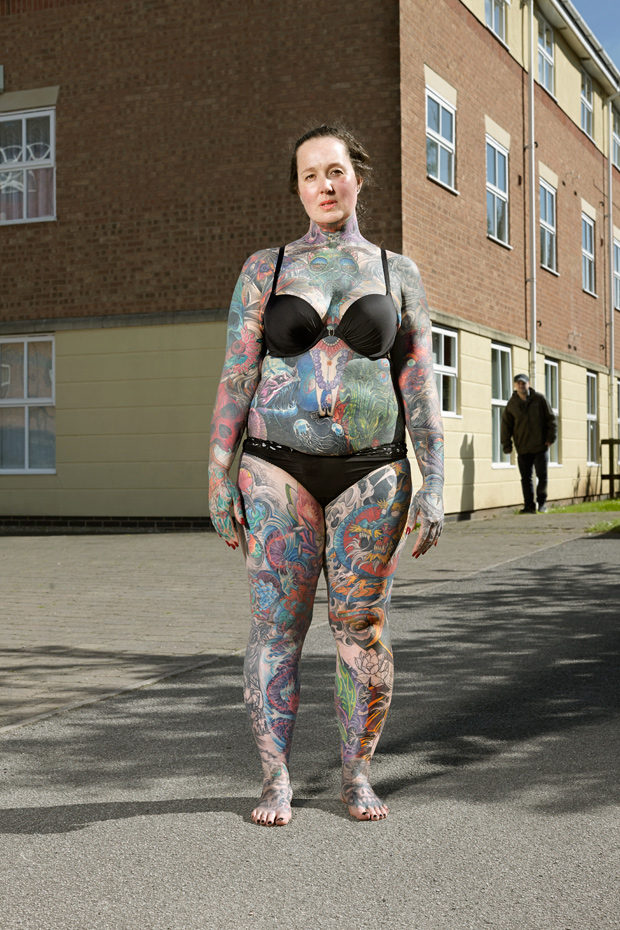 “My tattoos are part of who I am and I’ll always love my bodysuit now and when I’m 80. The love I get for what I look like is what it’s all about.” Victoria, 37, Coventry 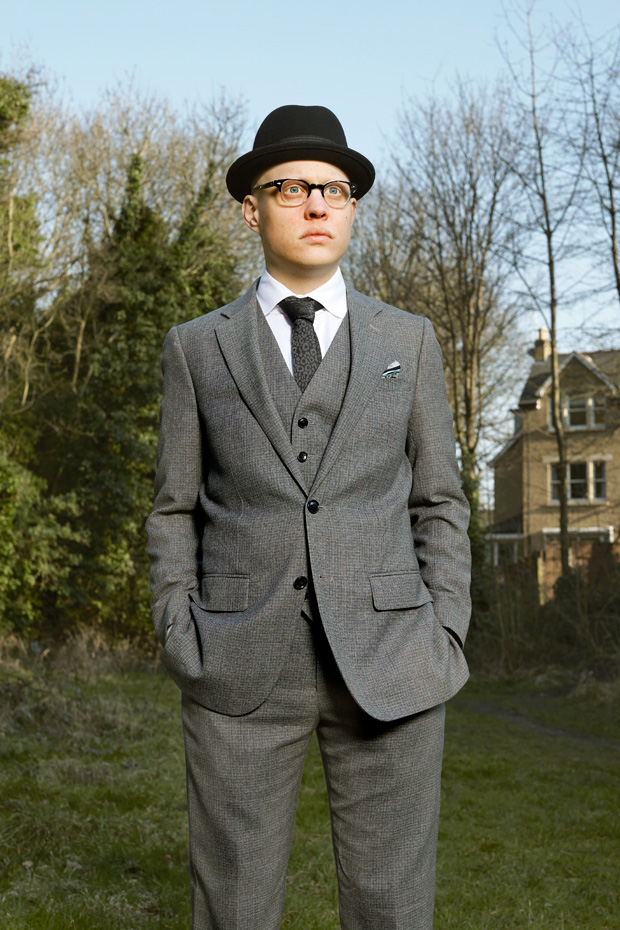 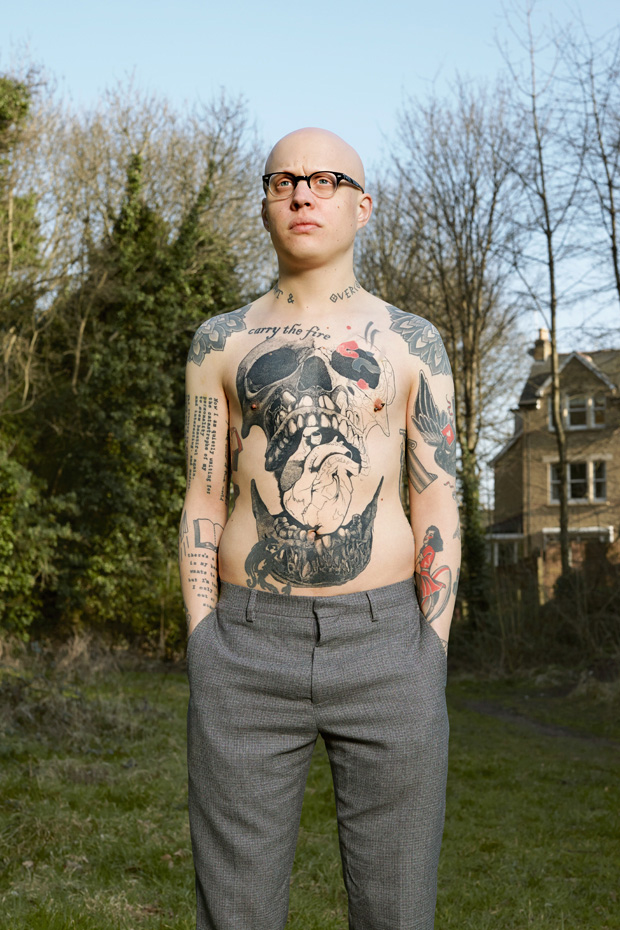 “I’ve become less precious about tattoos the more I get them. So hopefully I’ll only stop when I’m dead.” Andrew, 32, Highgate 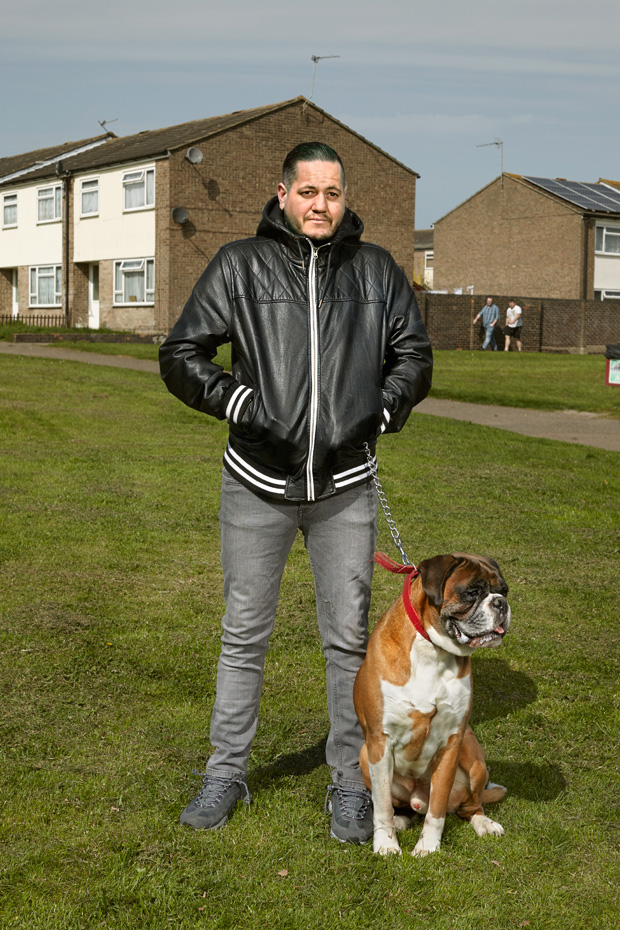 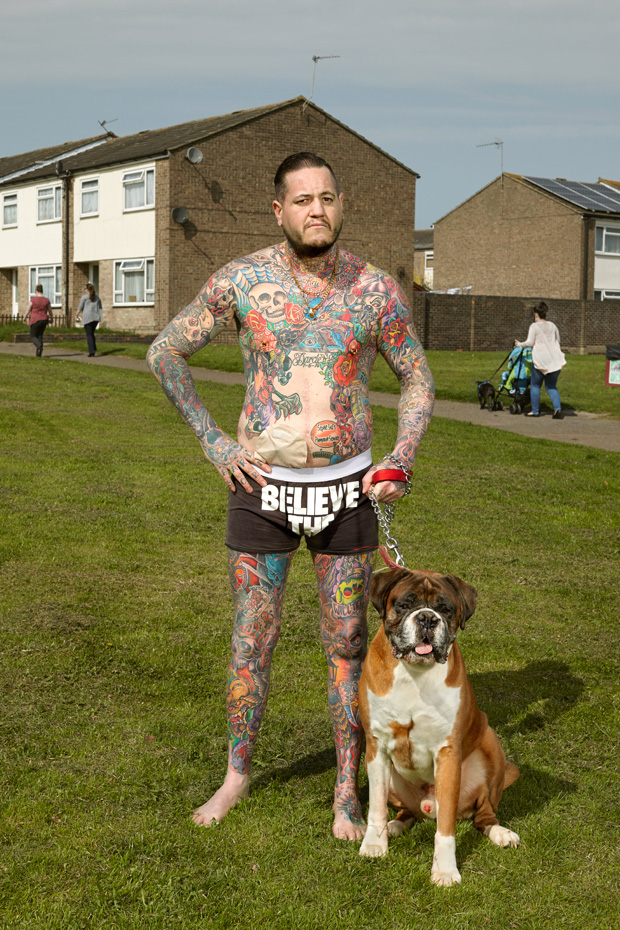 “They have given me confidence in life since my Crohn’s illness, I will love them in the future like I do now.” Peter, 38, Colchester 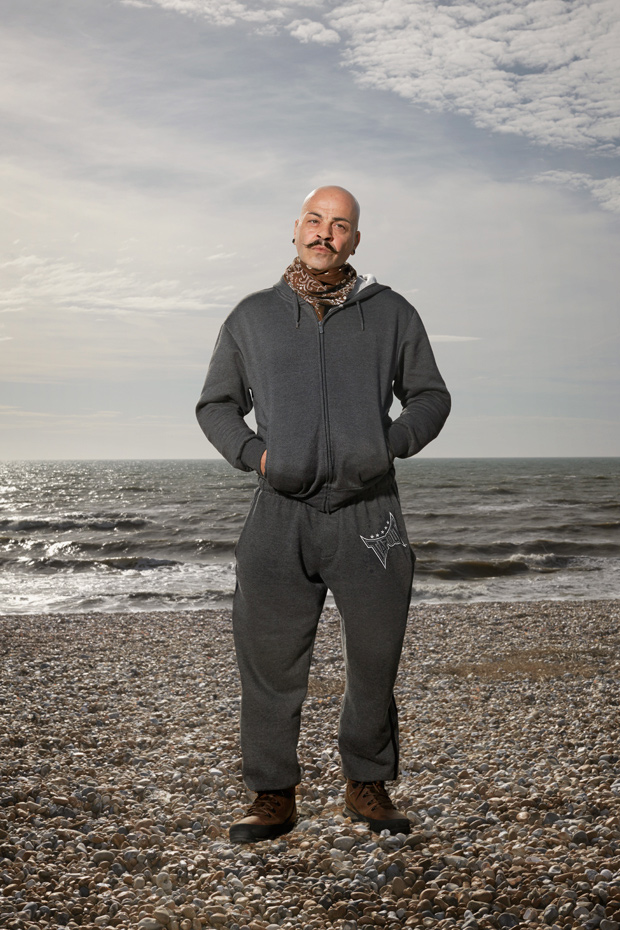 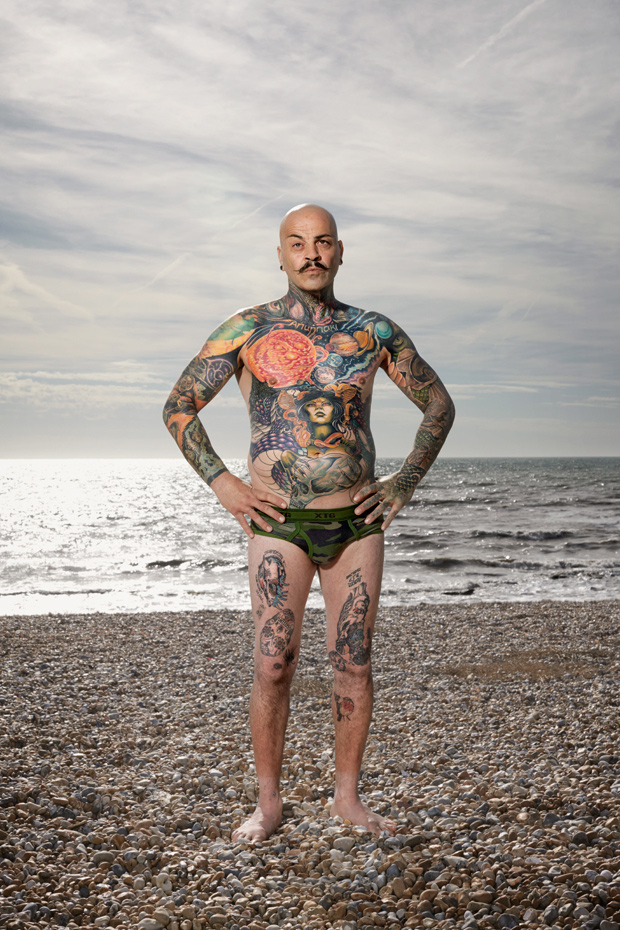 “I’m beyond the stopping point now. It fucking hurts like shit man but I wouldn’t change my look for the world.” Unsal, 46, Hastings 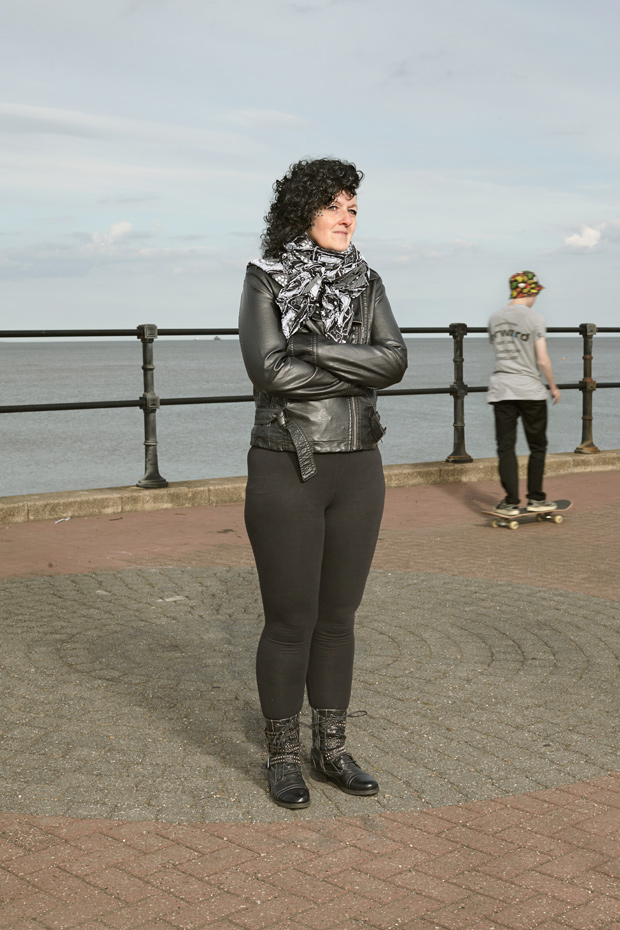 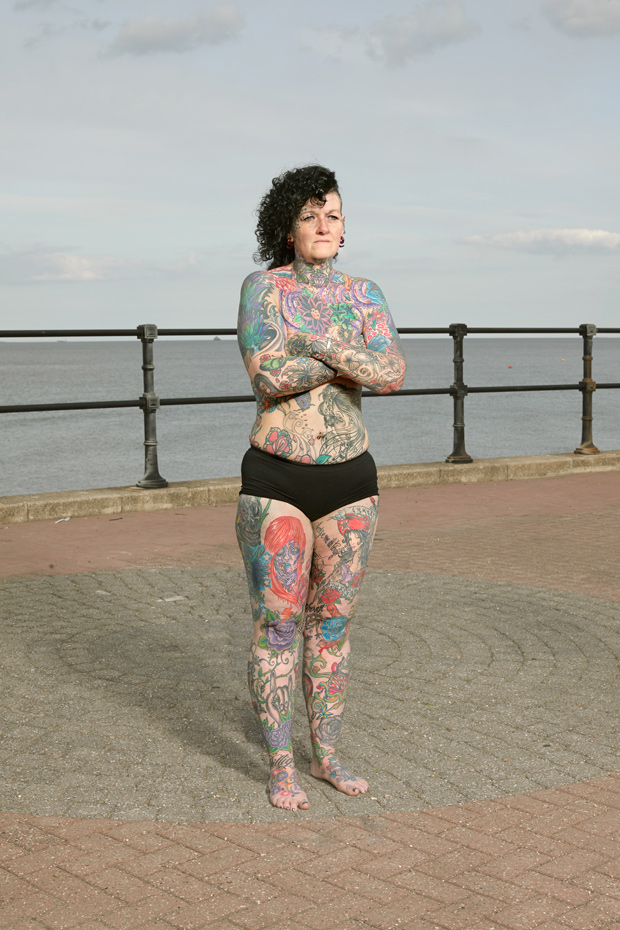 “Can’t say what age I’ll stop. While there’s still space to fill, It’ll get filled. I don’t think my attitude will ever change.” Michelle, 53, Cleethorpes 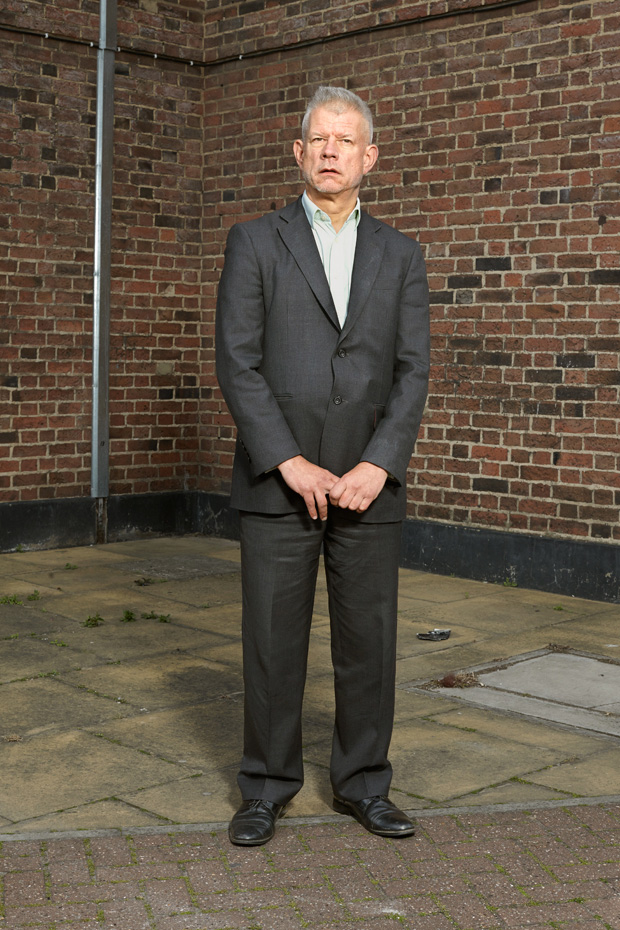 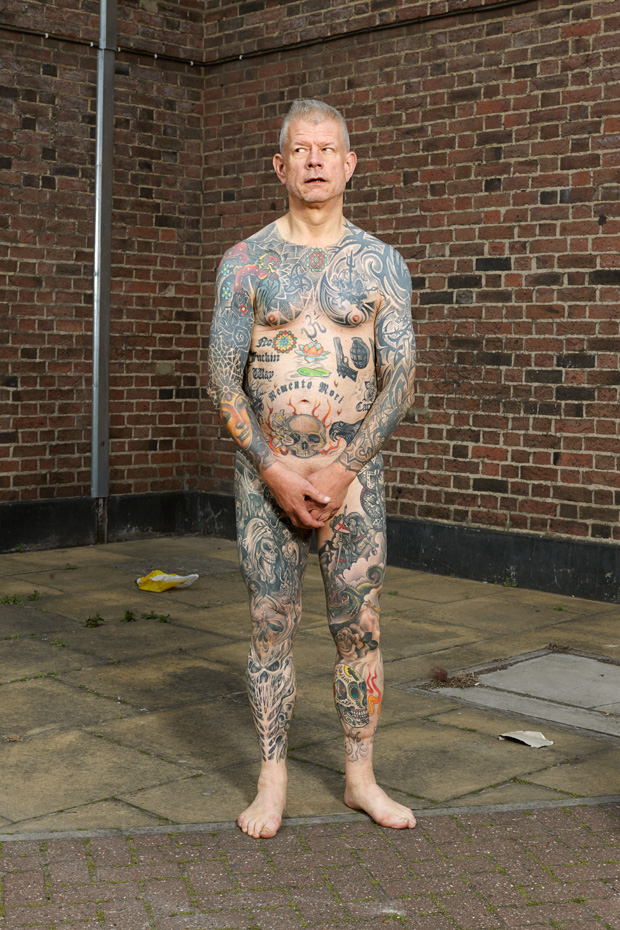 “I love the fact I’m middle aged, have a professional job, am surrounded by straight people and I have ‘No Fucking Way’ tattoed on my chest. Bill, 59, London 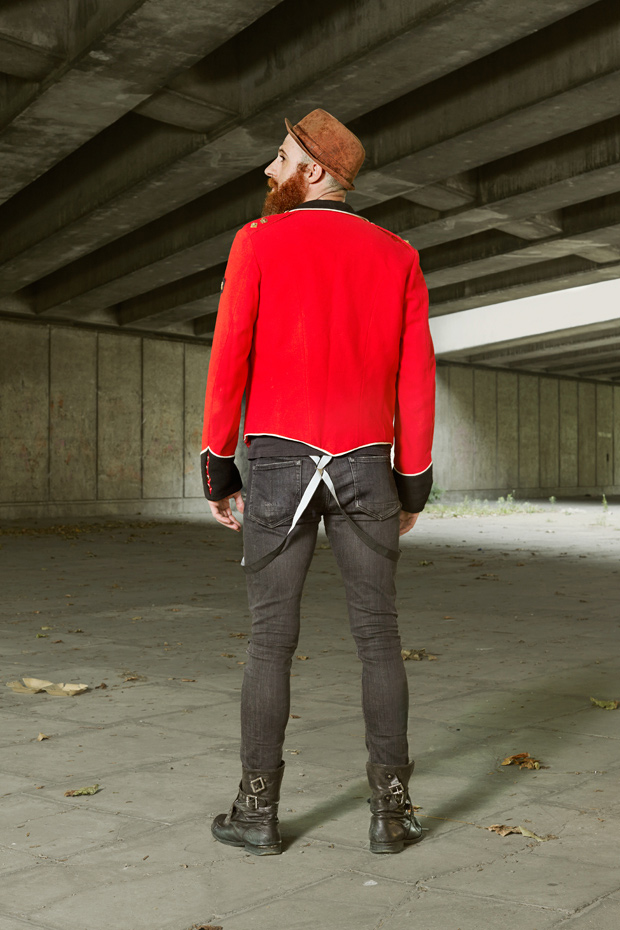 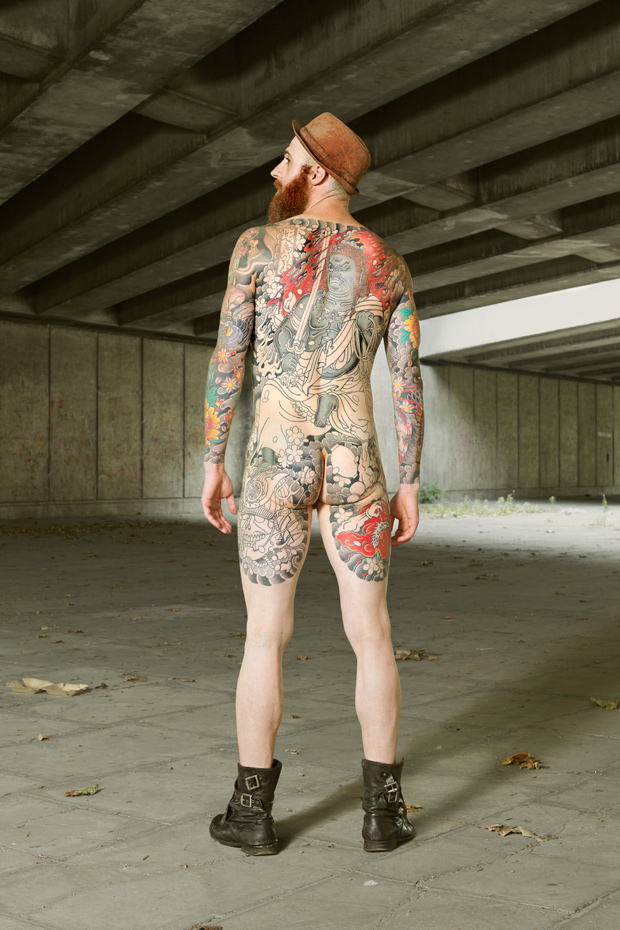 “I love every inch of my skin but I love my back most because I’ve been waiting for 17 years to get it done, and its exactly how I wanted it.” Stefano, 33, London 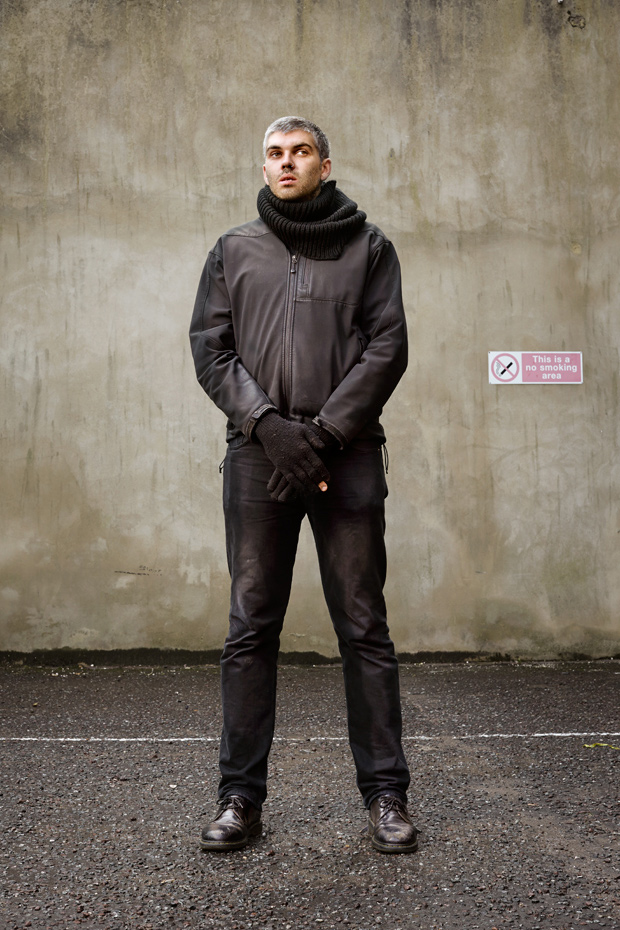 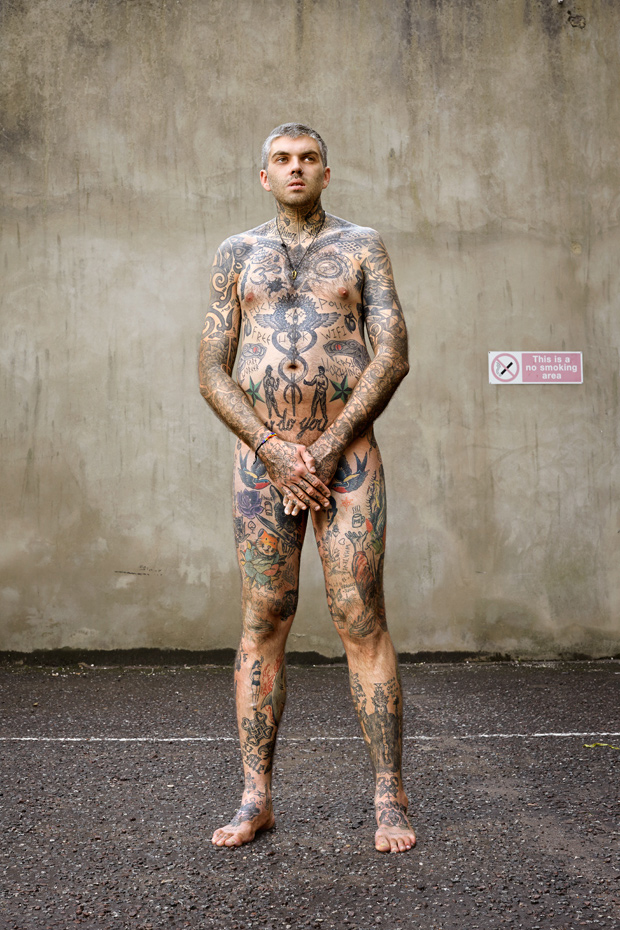 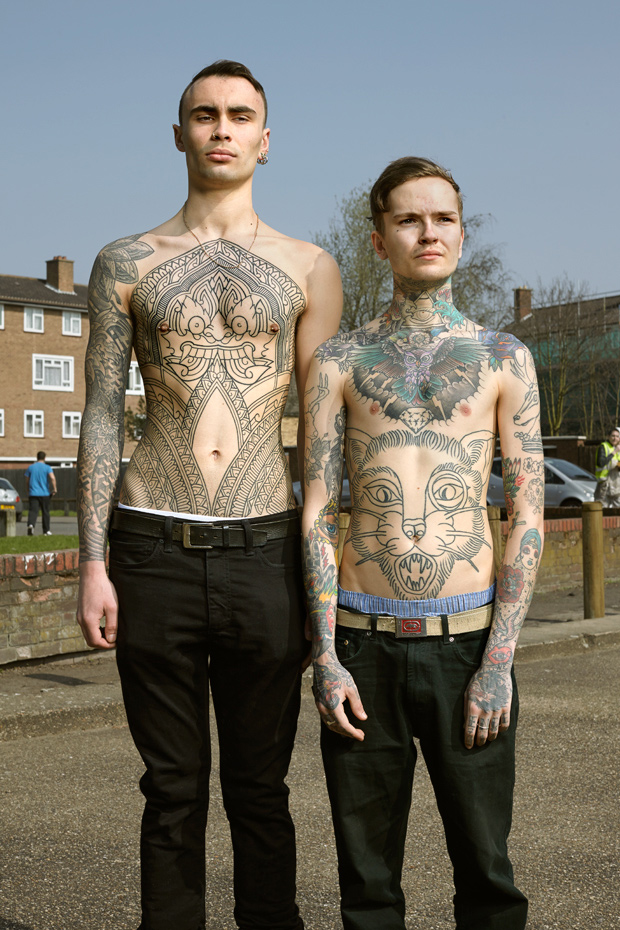 “I was 14 and my mum tried to wash it off. I’ll stop whenever I die, everything I want to remember gets tattooed on me.” Stuart, 22, Bromley