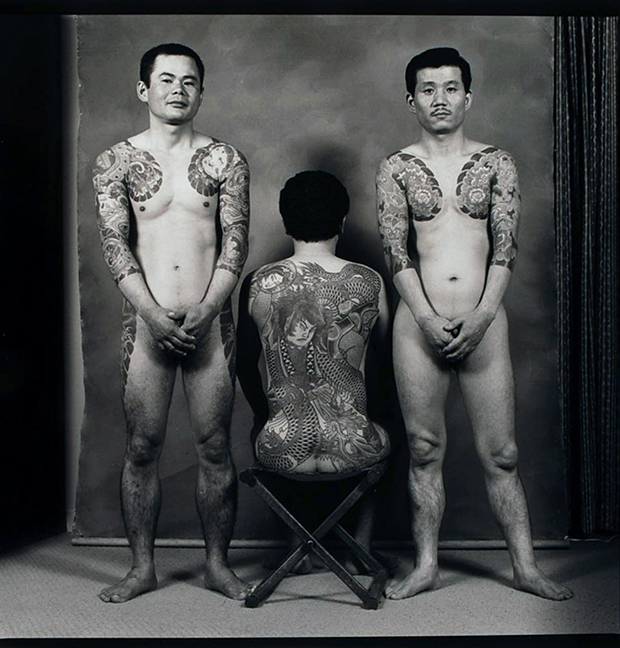 Leon Borensztein: In 1996 The New York Times Magazine send me to Japan to document the Generation X, the underworld of Japan. I was worried a little, as I was dealing with the real underworld without any protection. On my third day I have a real Yakuza, three gangsters coming to my fancy hotel room; they refused to meet at any place but on my territory. Two of them had missing pinkies, a bad omen. After taking a few exposures I asked them to take their shirts off, which they did promptly. After a while, I asked them to take all their clothes off so I could photograph all their tattoos. All of them went to the bathroom, took showers and returned naked. I had two young and attractive Japanese girls with me, students from the best university, speaking perfect English and working with the world press. To my surprise all went smooth, they did all of what I asked. I never felt any real danger. On the ninth day, I was supposed to photograph members of motorcycle gang, young fellows who later grew up to be the real gangsters.

They wanted to meet at midnight at undisclosed locations, since their names were known to the local police. We meet them some place, and we were told to follow them, about 20 on 10 bikes. They were driving very fast out of Tokyo, and I started to worry. After an hour of driving, we arrived to some place that was totally dark, some Shinto temple with an adjunct graveyard. It didn’t look good. I powered my generator, set my studio lights, but then a few of them took their hara-kiri sabers and started to throw them in the air and in some maddening dance started to move closer and closer to me when yelling angrily in Japanese. There was no escape. The leader, his face full of fury was just centimeters from my face and his dagger was performing some frenzied dance between us. As the cold blade was moving fast in front of my eyes the modeling lights were reflecting in ominous way.

I was sure that this would be the end of me. After scaring me, they turned to be pussycats, did everything that I asked them, and more.

A few weeks after returning from this assignment, when the award piece was published I received a fax from one of the girls that the real Yakuza were going to kill all of us because their faces are showing and the caption under the image said that after the session they went to “claim” money that somebody owed their boss. I explained to the girl that they stood in front of my camera voluntarily, but somebody told them that there would be a big black bar over their eyes. I am alive, but I never heard from my young translators.