Baltimore-Based Photojournalist J.M. Giordano on What It’s Like to Cover the Protests (and Get Beaten by the Cops) 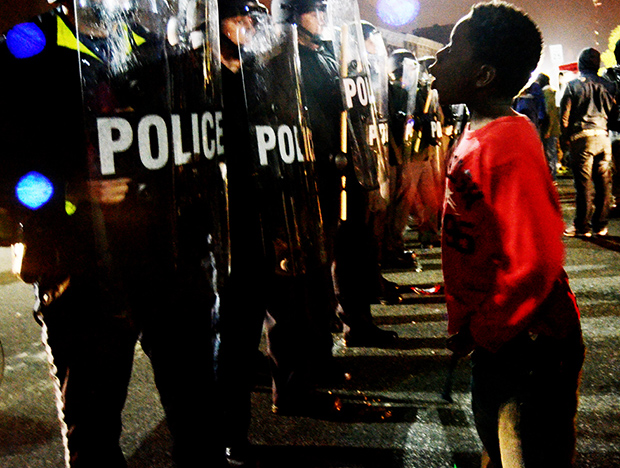 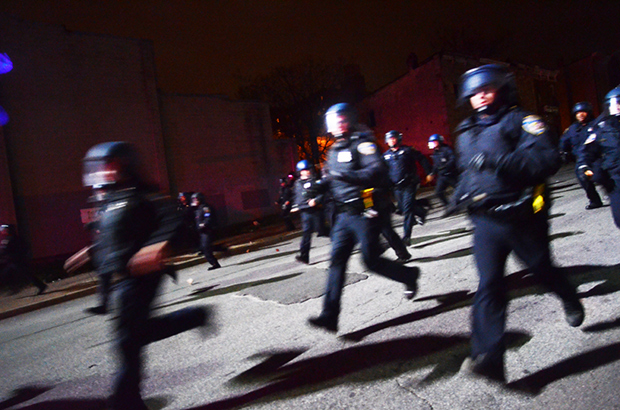 Baltimore-based photojournalist J.M. Giordano loves his city, and when amid recent protests over the killing of 25-year-old Freddie Gray, he rushed straight into the front lines. Giordano and his colleague, writer Baynard Woods, were caught in the middle of protesters and police when the photographer was beaten to the ground and hit by officers. He held his camera the whole way through, snapping even as he was wrenched from the street and back onto his feet.

As a Staff Photographer at the Baltimore City Paper, Giordano places his duty to his hometown before his own survival instincts. Ultimately, the story is less about a photographer who got beaten than it is about a city filled with citizens who are willing to get up after they are pushed down. Despite the fact that his experience is undeniably shocking, Giordano has no interest in sensationalizing an event that bears heavily on so many people, on his city, and on our country at large. Simply, he wants to document the realities of the situation, devoid of the excesses and drama that has characterized much of the coverage.

Talking with Giordano, it’s clear that the last few days have not discouraged or lessened his love for the city. If anything, it’s deepened his passion for photographing his town; to him, Baltimore is still “B-more,” a place filled with people he considers family, or as he affectionately abbreviates, “fam.” Today, he says, will be his one day to rest before things heat up again this weekend and he plunges back into the streets, and I can’t help but notice that he signs his emails with a simple valediction: “Peace.”

We interviewed Giordano about the experience.

What was your first impression upon entering the scene? Were there any moments that were particularly surprising?
“We, my writing partner Baynard Woods and I, rolled back to the Western District Police station while the rest of the media was focused on looting. At the station, residents were shouting at the cops on the barricades, who were now in full-on riot gear. Some were blowing smoke at the cops and encourging kids to yell at them. Before we really knew what was happening, the cops began to mobilze to clear the streets. Myself and the writer and one other camera man from Reuters, who was later arrested for taking photos, followed the police line by cutting through an alley. At the next line, I was close to them, as I don’t use a zoom lens (all prime), I’m either in there or I don’t get the shot. We thought the police were pulling back, like the ebb before a Tsunami, then surged and charged the crowd, who by that, time was throwing rocks and bricks at police. Several police swarmed over me an another protester and beat us with their shields. My writer used the last juice in his phone to get the video of the cops on us. Someone grabbed at my camera but I hung on and kept shooting towards the protester. One image shows a cop swinging his baton on the dude who is clearly putting his hand up to stop them.

“While this was going on, the Reuters guy was shooting and told me that two cops came after him, with one saying ‘arrest him.’ He was taken into custody and later released. They are definitely targeting the photographers here. Another one was shot in the head with a rubber bullet.” 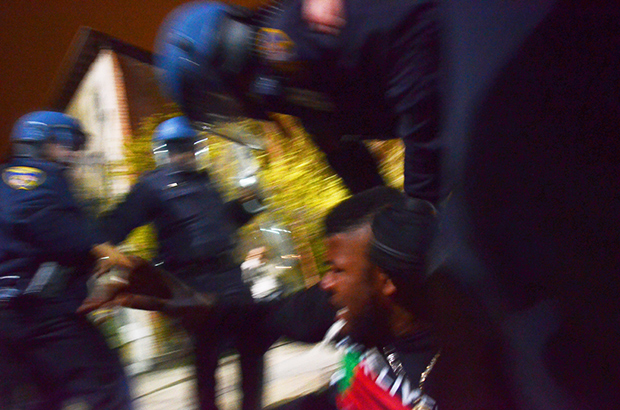 You’ve said in a previous interview that you don’t take sides. Was this attitude difficult to maintain during the incident?
“No. I have to maintain a balance no matter what happens to me. It’s important to my being as a photojournalist. I’ve been thanked by gang members and cops alike for my work in the field.”

Why did you keep shooting? Was it instinctual, or did you have to make a conscious decision to continue?
“It’s instinctual. All I could think about was the other guy next to me. He wasn’t doing anything but yell at the cops, which is not illegal.” 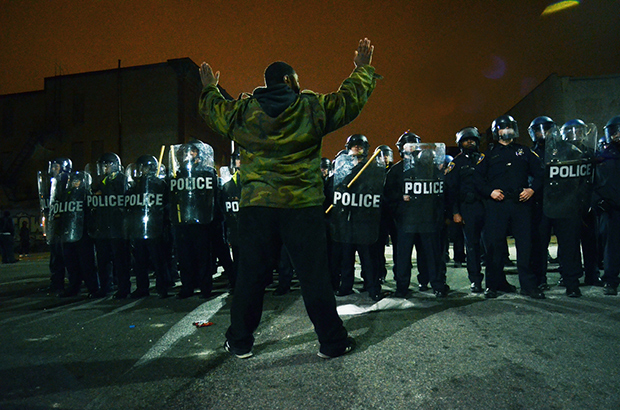 Why was it important to you that you document everything that was happening, regardless of your own safety?
“I’m from B-more. It’s home. People need to know that they can depend on my coverage. I’m not a parachute journalist here. I roll in with my expensive equipment and fucking neck scarves like it’s fucking Falluja. I know the people here and they know me. ”

Do you think the fact that this is your hometown affected the way you covered the protests?
“Yes. There are plenty of big guns walking around getting the usual yelling protester/crying people shots. I try to add a little humanity because I live here. Also, the paper whom I’m shooting for allows me to use black and white and my own style that I use when shooting in B-more.” 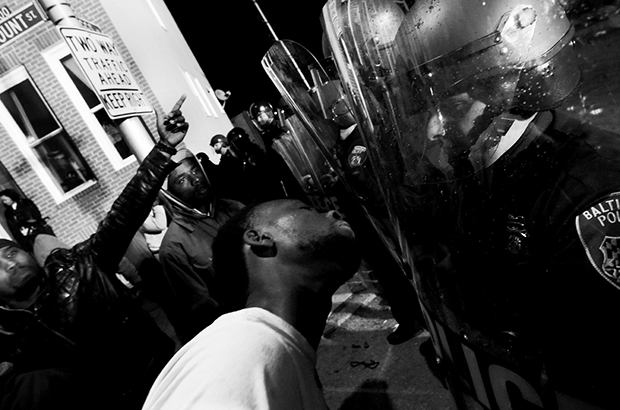 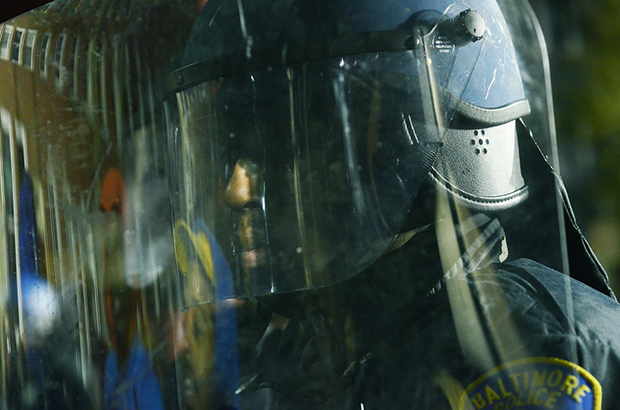 What role did the media in general play in these protests? Do you feel that the coverage was helpful or detrimental? What could they have done differently, if anything?
“To a degree, you need the media. In a case like this though, the out-of-towners are fanning the flames with their 24-7 need for a story. The nationals blew up some white dude throwing a bottle at cops as ‘mayhem in the protest.’ Total non sequitur. Look at the videos of people yelling at CNN, Fox, etc. to get the fuck out. That’s your real answer.”

How would you describe the situation now, after things have calmed down a bit? Is the city recovering?
“The city is calm now, but shit’s probably going to get hot this weekend. The protests have been 99% peaceful with a mere 1% of people stirring up shit.”

This incident is still pretty fresh for you. How do you feel about it now?
“It has made me stronger as a photographer. I want to get stories like this from an angle that no one is covering.” 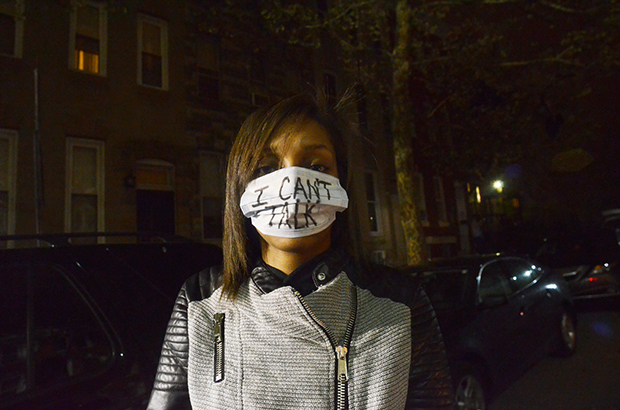 You’ve shared some insight over your social media channels. What has the response been like to these photos? Why is it important for the public to see images like these?
“Pretty powerful. People on social media have been real fam. Totally supportive. I even got a DM from a cop thanking me for showing all sides of the story.”

Do you draw any sense of hope from the events of past few days? In other words, were there any moment in which you felt that real change was being made?
“Definitely. People have been putting themselves between some more active protesters and cops. People who live here do not want to inflame a stereotype of the city made popular by shows like The Wire. Lots of peaceful people here. But you can’t kill a man and then show up in riot gear and not expect a pushback.” 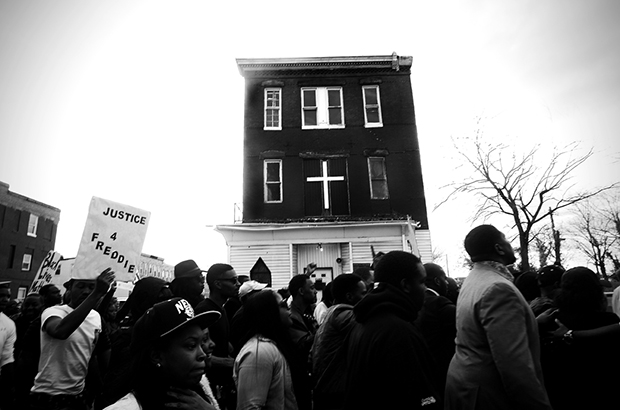 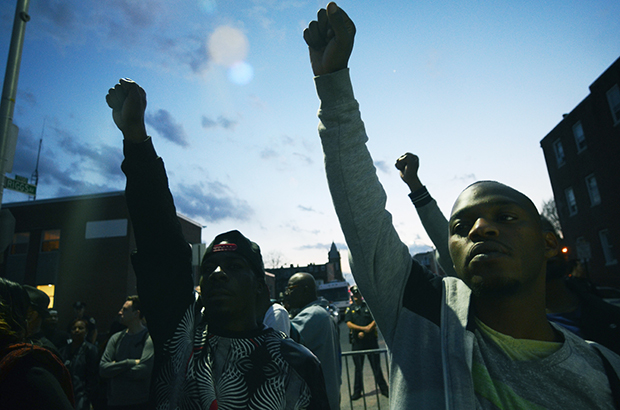 If people only take one thing from your story, what should it be?
“Don’t believe the hype. There’s good, peaceful people here who are keeping a lid on a very volatile situation. The last ones are Battle of Sandtown-Winchester shots.” 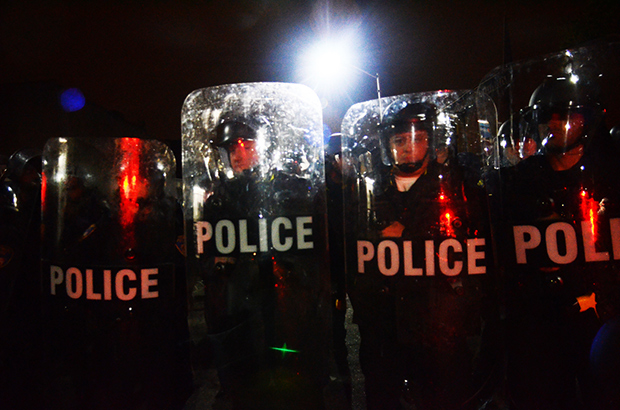 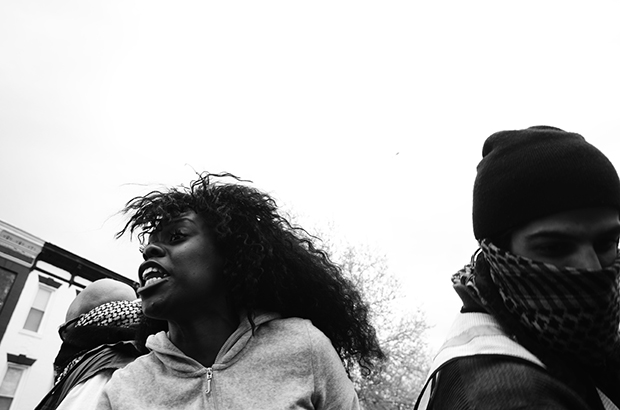 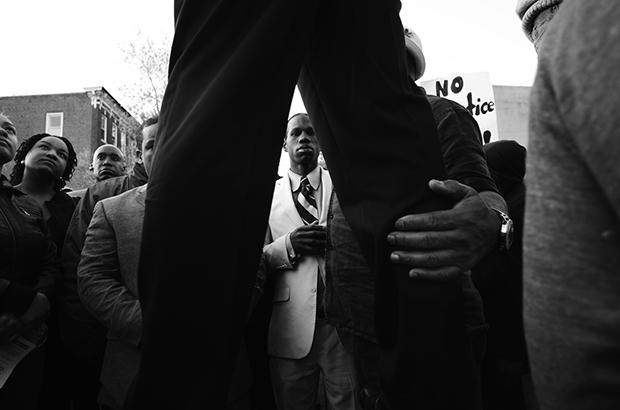 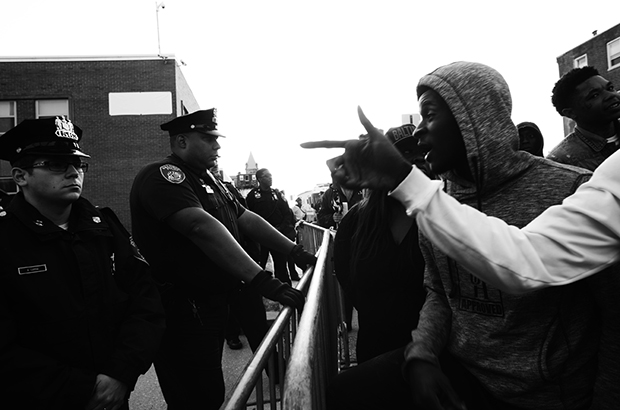 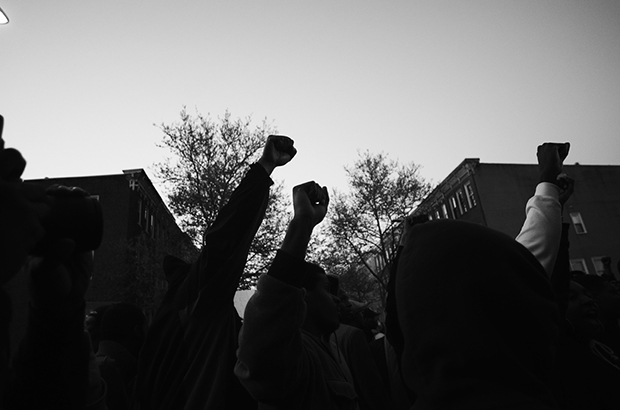 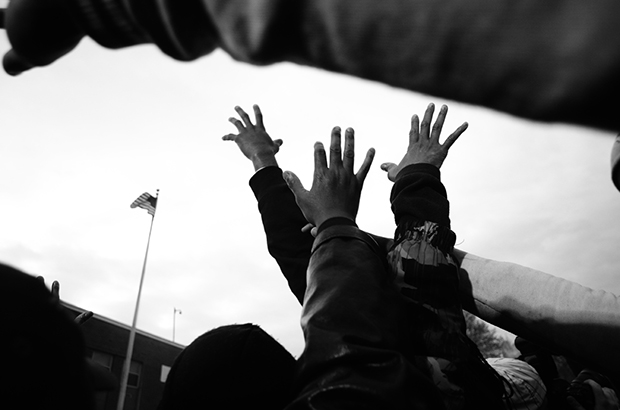