We Asked 14 Photographers: What is the Most Precarious Situation You’ve Found Yourself in While Photographing? 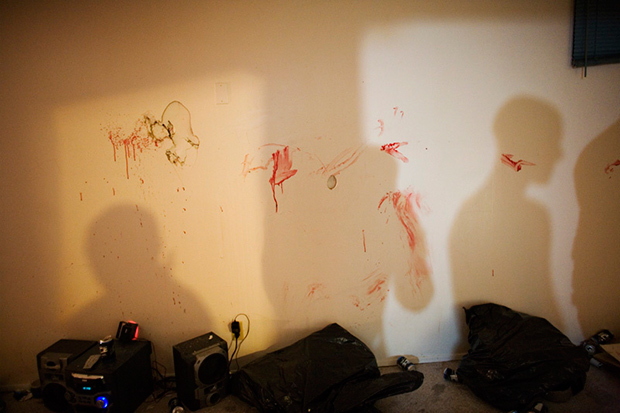 The wall after the fight © Brett Gundlock

Brett Gundlock: When I was younger, I shot a project on Neo-Nazi Skinheads- the entire time was a precarious situation. But the one event that stands out was one winter night in Calgary, Canada. I was with a new group who were known for being pretty violent (and generally psychotic). Two of the skinheads got into an (drunken) argument, and I started to shoot.

The bigger of the two (Tyler) told me to stop shooting and that this wasn’t a side he wanted to show of their life. But the smaller one (Rob) defended me and my role there as a journalist. I had been shooting different groups in Canada for three years at that point, so I had a track record with them, and they understood what I was doing.

The argument escalated pretty quickly. Rob put on brass knuckles, Tyler ran upstairs and grabbed a samurai sword. It was one of those cheesey swords that you buy at a truck stop and leave on the top of your fridge. But it turns out they are pretty sharp.

So Tyler hit Rob with the sword (blood everywhere) and Rob hit Tyler with the brass knuckles. Tyler went down, one punch KO. I had never seen someone get knocked out with a single punch. I thought he was dead for a second. But this was my opportunity to start shooting. Tyler was knocked out for a minute, until Rob woke him up with a steel toe kick to the head. Pretty crazy five minutes for sure, but I shot quickly and quietly and then decided to exit before someone actually did die in that basement.

They called me the next morning, I guess they made up and they invited me back that night to have some more beers. Both Tyler and Rob are sitting in jail on murder charges for randomly beating a disabled man to death.

Brooke Frederick: Most recently would have to be an impromptu tour of a slaughter house in the middle of Louisiana. I pulled over to check out the place and the owner himself came out and offered to give me a tour and let me photograph it. I was wearing flip flops and a summer dress… Needless to say I could not turn down his offer.

Giles Clarke: I was on patrol with police in El Salvador one Saturday night a couple of years back. My wife once phoned me while there was gunfire going off in a rough suburb of San Salvador. I had a heavy anti-gang police officer on top of me and my nose was pressed to the dirt and, for some still inexplicable reason, I decided to take her call. I told her I was at a fairground and everything was fine.

The other time was arriving at Stephen Spielberg’s office to photograph him on the Universal Lot in Hollywood and realized I had left the rolls of film at home. More embarrassing than precarious!

Jeffrey Stockbridge: Photographing while hiking over a Gillespie Pass in New Zealand during a rainstorm was pretty precarious. More interesting and relevant, however, is when I embarked on Kensington Blues (2008-2014). During the course of the project, I was spending a lot of time walking up and down Kensington Avenue in North Philly. The Ave is infamously known for drug abuse, prostitution and violent crime. The first couple weeks of photographing were some of the most challenging times I’ve ever faced as a photographer. At first, I was too scared to get out of the car. Every woman on every corner was making eyes at me- they thought I was looking for a date. I worked up the courage to ditch the car and just walk around. In order to make portraits with my 4×5, I had to get people to trust me, which means that I had to trust them first. This wasn’t easy, but through sharing stories and showing prints, I was able to find common ground between myself and the people who were hard-up on the Ave. Communication and respect were key.

As my relationships within the community grew so did the project. A year or so later, I found myself feeling at home on the Avenue, and then one day I saw a young woman get shot in the back of the head right in front of me. Although I had immersed myself in my subject and felt entirely comfortable in the neighborhood, I knew that such things happened. Still, this was a stark reminder of the violence that plagues economically depressed inner-city neighborhoods throughout the US. A violence that we consistently hear about but don’t often witness first hand.

Lucas Foglia: I was driving with my friend Charlie in a minivan across Nevada. I had my camera. Charlie had a mandolin and a pink baseball hat that said “Guns & Guitars” on the front. We stopped by the Cliven Bundy’s ranch to see what the standoff between a militia group and the FBI looked like. At the gate of the ranch was a man sitting in a lawn chair, holding an assault rifle. I asked if I could take a photograph. He said ok. Then he decided that we were undercover FBI, pointed the gun at my friend Charlie, and told him to play the mandolin.

Paul Kwaitkowski: I once shot for an escort site, and the handler became very erratic and borderline violent during a shoot because one of the girls flirted with me.

Patrick Brown: The most precarious situation I have found myself has nothing to do with photography as such, but with the business of photography. Financially precarious has been the hardest for me, one needs space and the financial freedom to breath on a curative level. I’m not talking about millions of dollars, but enough to be able to cover the cost of the bus fare and rent.

Noah Rabinowitz: In 2008, while photographing an environmental disaster, I played a cat and mouse game with federal police. They were dispatched to protect the site of a coal ash spill which had swallowed up a town around a power plant in Kingston, Tennessee. I was reporting on the event and found myself a bit too close to the site. Also in 2008, I was detained by police while covering protests during the Democratic National Convention in Denver. It was a precarious year.

Chris Arnade: I never take pictures without full consent, never secretly photographing anyone or anything. That diminishes precarious situations. I have been in places, simply holding my camera, where it is wrongly assumed I took a picture of a drug deal (I do take those, but with consent). It is partly why I shoot digital, you can just show anyone what is on the camera and delete it if necessary.

Once taking a picture of a prison from a state road, the police threatened to take my camera away. Despite being in the right, I deleted the pictures.

Juan Madrid: Probably exploring abandoned buildings/homes. Not a great thing to do alone, even if you bring something to protect yourself with. I’ve never had anything serious happen but have been in places that had signs of people living in or using the space. You have to be careful with that, because sometimes the people using those spaces are taking part in illicit activities (i.e. using or dealing drugs) or they could be dealing with mental health issues if they’re homeless (as they can’t easily obtain treatment), and you never know what you could run into with the structural integrity or other physical dangers of old buildings. I’ve managed to puncture my foot on a few rusty nails but thankfully missed out on tetanus.

Irina Popova: During 10 years of practice, I’ve been in all kinds of situations: entering the houses of gypsies, alcoholic and drug hells, brothels, a Georgian city 40 min. after it was bombed. The most dangerous and uncertain situation, however, I had not with “criminal people” but with the police, military and authorities, who are generally supposed to keep you safe and secure. Once I was arrested in Morocco after being in a village where hashish was being produced. Three soldiers brought me to the mayor (who has a share in the business). He deleted all my pictures I made there and made the baron (my host) buy me out of the imprisonment. After that, I had to leave.

I still want to return into this dark and chaotic world, which reminded me of suspense movies, where you see no horrible images, but the place itself makes you shiver.

Tom Jamieson: It’s not always the situations while you are photographing, but more often the bizarre situations you find yourself in by being a photographer in the first place. I was working on a project with a friend in Iran, and we’d been hanging out with this guy all day who invited us to stay with him out in the suburbs of the city we were in. He lived downstairs and another tenant lived upstairs in the building he was in. It was a really hot summer’s evening, so my friend and I tried to sleep outside in the courtyard. It wasn’t until around midnight that we began to question why there was a constant stream of men coming and going through the courtyard and upstairs to visit the other person who lived there. Being completely naive 20 year olds, we failed to realise until it was too late that we were unwittingly staying in a brothel.

Anthony S. Karen: In Haiti, between 2003-2004. I was spending a lot of time in La Saline and Cite Soleil, two very dangerous slums during that period. Cite Soleil was divided into four sections, each controlled by well-armed rival gangs, and then the Coup d’état was slowly building steam. What made it dangerous was that there wasn’t always a definitive “front line.” You had 16-year old children firing weapons with absolutely no idea what they were doing. I actually took a weapon away from a kid and showed him how to carry it so he didn’t blow my head off by mistake.

Zed Nelson: In Afghanistan, I was in a car that got machine-gunned from two sides. It was surely the most horrible experience of my life. The car was hit 17 times, my interpreter was shot through the neck, and my friend and colleague Tyler Brule was shot in both arms. I don’t recommend it to anyone. When this kind of thing happens, if you are a freelancer, you are on your own.

Natalie Keyssar: Honestly it’s hard to say. Being a photojournalist inherently involves its share of risk, and hopefully as much preparation as possible to mitigate the risks we take. Of course photographing protests and things of that nature is not the safest thing I’ve ever done, but I find it hard to focus on the risks to myself in those situations when I’m surrounded by protesters whose risks are far greater. Statistically, some of the roads I’ve taken to and from shoots in various parts of the world were probably more dangerous than any single thing I’ve ever shot.