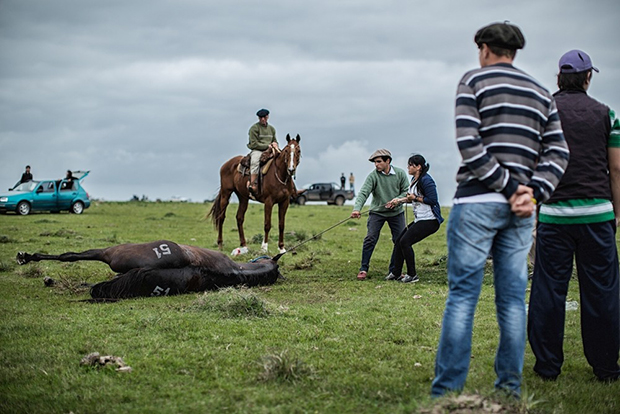 Horses competing in El Raid race in Jose Pedro Varela, Uruguay face 60 miles of paved road, a perilous journey for even the most resilient of animals. Running at an average speed on twenty miles per hour, the horses are followed by a rush of trucks, from which their handlers, known collectively as a “stud,” douse their steaming bodies with hose water. Dehydration, exhaustion, and overheating are very real dangers, and the animals are checked by veterinarians during a single hour’s rest period. Despite these precautions, horses are lost to the race; in the 2012 season, five Raid horses died.

Brazil-based photographer Luiz Maximiano documented El Raid and the shorter speed races leading up to it, capturing both the courage and the acute vulnerability of it equine athletes. The horse pictured here, a contender in a speed race the day prior to the El Raid endurance race, fell to the ground while experiencing painful cramping. As she strives to stand, her stud aids her efforts. Despite her massive body, which takes up nearly half the frame, the mare is seen here as searingly delicate, her small shod hooves thrust outwards. Maximiano explains that this particular horse recovered from the frightful moment later in the day.

This image originally appeared in Playboy and is a winner of American Photography’s Latin American Fotographia 3.