To Pay or Not to Pay?: Four Different Approaches to Portraiture and Exchange 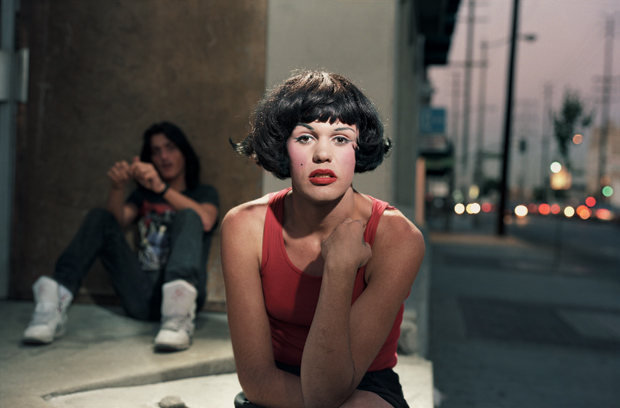 Paying people to take their portrait has its proponents and opponents, splitting photographers between those who view it as legitimate compensation and those who see it as ethically unsound. For English photographer Jim Mortram, whose long-term documentary project Small Town Inertia focuses on the lives of people in his local town who have been marginalized by illness and poverty, there is no moral ambiguity when it comes to paying. “I’ve always viewed it as a ruthless shortcut,” he tells me. “Purchasing opportunities instantly makes the heart of an image about money.” Equally for Mortram the possible shortcut offered by paying for a portrait may ultimately mean missing out on the process of building up a relationship with a subject. “I spent five years leading up to a first image. Was it worth it? Of course—those five years were a beautiful journey, leading up to a moment of true trust.” 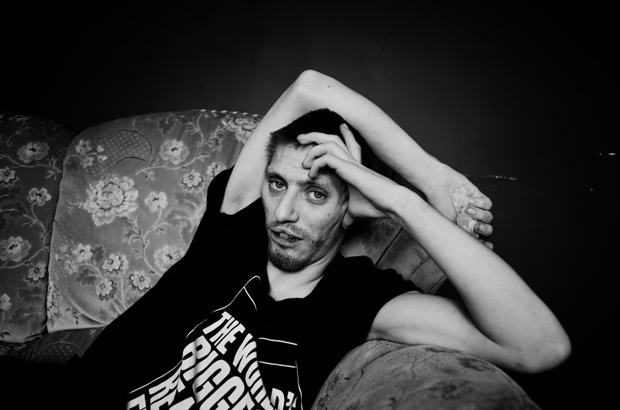 For others these boundaries are not so clear; take for example Chicago-based photographer Dave Jordano. Noticing the disproportionate number of young white women working as sex workers in a Detroit neighborhood, he started photographing them, paying them to pose for portraits which became the series Darkness in the Light. Jordano explains that when “I approach a prostitute to ask if I can take her photograph, I’m actually entering a kind of mutual understanding that each of us is looking for something. Money is the exchange that becomes the common language.” He goes on to say that paying doesn’t change the dynamic of the relationship; “The fact that I’ve given them something for their time doesn’t change my intention nor does it in any way alter the ethical underpinnings of the work. I’ve never thought for a moment that I was taking advantage of them just because money entered the equation, nor that the money was somehow circumventing the moralistic nature of the photography.” 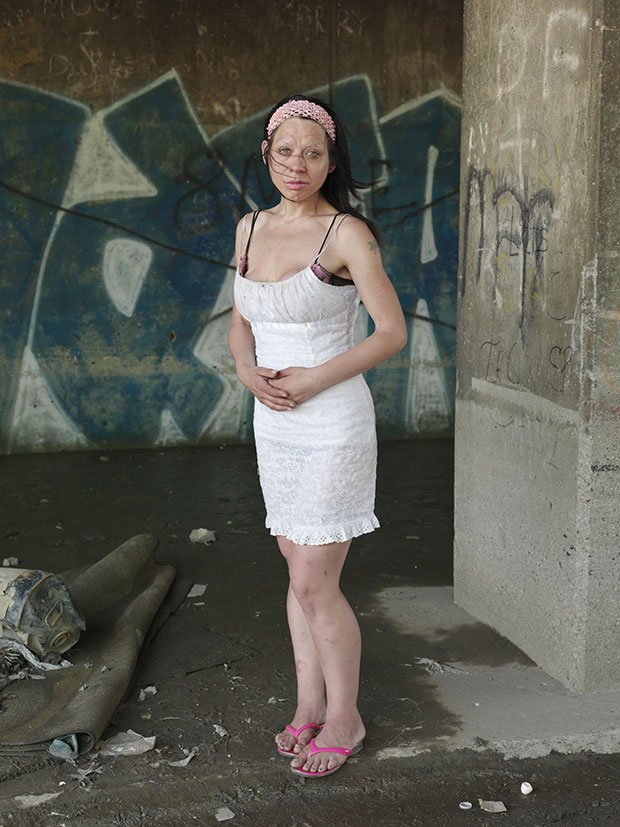 Melanie, Detroit, 2011 from Darkness in the Light, Dave Jordano. 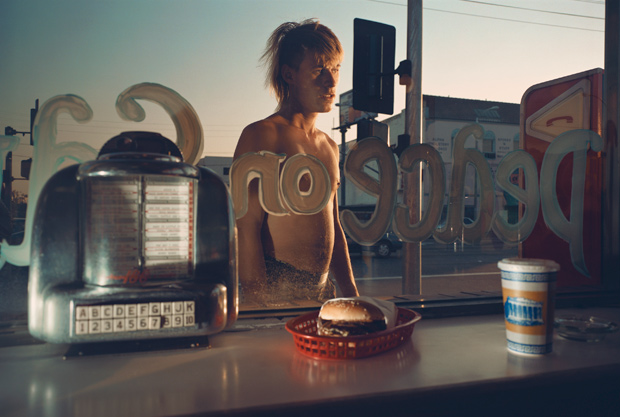 For some photographers, the act of payment can be bound up in what they are trying to say with their photographs. For his series Hustlers, Philip-Lorca diCorcia photographed male sex workers, paying them whatever amount they would normally have charged a client for sex. In doing so he created an unambiguous link between show business and prostitution, a sad meditation on dreams which will likely never be fulfilled. 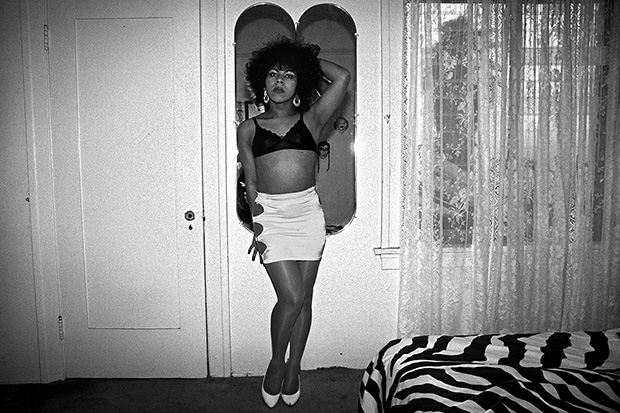 For other photographers, the photographic element may be a side consequence of paying someone for something else. Scot Sothern’s series LOWLIFE consists of photographs of female sex workers he slept with during the 80s and 90s. As a body of work it’s a complex blurring of boundaries and priorities—it’s hard to determine if he’s really paying them for sex or a photograph, or if this distinction even matters.

What unites these last three examples is that they all involve paying people who sell sex to take part in photographs. In some respects it might seem like a logical commercial equivalent to pay someone who sells their body to be photographed, since many of us still possess a sense that this is partly what a photograph takes from us, our physical likeness. Paying sex workers for portraits may also give the photographer the justification that they are not simply photographing—and therefore indirectly benefiting from—another person’s misfortune. Instead they can make the argument that they are providing their subjects with money without the need for them to engage in their inherently risky profession. As Jordano tells me, while he often feels conflicted that these women will likely spend the money he gives them on drugs, he also feels “a sense of relief knowing that I have at least momentarily blocked a potential encounter with someone who might rape, rob, or murder them.” 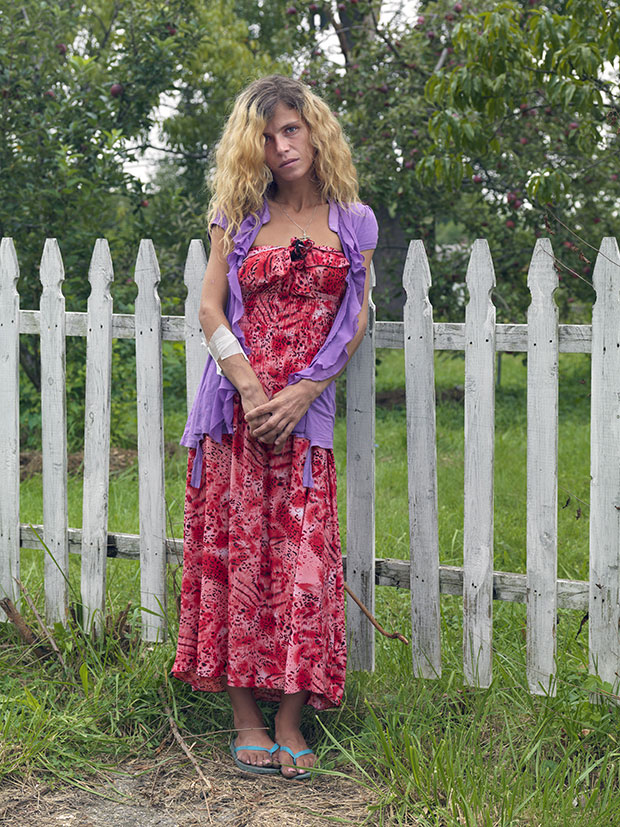 Fatama, Detroit, 2013 from Darkness in the Light, Dave Jordano.

Another factor to consider however is that given the way sex work is often criminalized, or at least highly stigmatized, paying may put such subjects in a position where they have to choose between money which they may badly need, and being indefinitely associated with sex work through that photograph. Twenty years on from the making of diCorcia’s Hustlers, some of his subjects might have left sex work, and might have partners, families or employers who don’t know about their past and who would react adversely to it. The power of the photograph to linger, even as the things it depicts change, is undoubtedly one of the reasons some people fear being photographed. If we choose to see payment as Mortram does, as ultimately about making up for a shortfall of trust between photographer and photographed, this becomes particularly important.

And there are of course still more intangible forms of exchange, the long-term relationships that can emerge between photographers and subject are a clear example of this. To give the final word to Mortram, he suggests that what he gives his subjects is something other than money; “We both get something from making photographs, I give and share as much of myself as with any relationship or friendship, I just have a camera.”

Dave Jordano’s Detroit: Unbroken Down, an intimate portrait of people both surviving and thriving in Detroit, is currently on view at United Photo Industries in Brooklyn through March 21st, 2014.

Jim Mortram’s Small Town Inertia will be on view March 3rd through 28th, 2014, at The Arts Centre at Edge Hill University in the UK.

Philip-Lorca diCorcia’s Hustlers was released by Steidl in 2013. Find it here.

Scot Sothern’s Curb Service: A Memoir, a gritty recount of Sothern’s exploration of curbside prosititution in the 1960s and 80s, was released by Soft Skull Press in 2013. Find it here.

This post was contributed by photographer and writer Lewis Bush.