The 15 Most Promising Photography BFA Grads of 2013: From SVA, Pratt, Parsons, MICA, and RISD

The first day of my first photography class in art school, Henry Horenstein told me, “People always like the early work.” I have since found this to be true. I tend to identify more strongly with the raw emotions of photographs made in the throes of hormones than those benefitting from wisdom gained by age. The work is usually rougher, more risky.

With this thought in mind, I decided to schlep to art schools in the New York City area and go to every thesis show I possibly could. I sat in on senior critiques, asked department heads and current students to recommend standout work among graduating seniors, and scoured the websites of over 200 photographers getting a BFA this year. Hailing from SVA, Pratt, Parsons, MICA, and RISD, here are 15 students who caught my eye with their fresh approaches to image making. 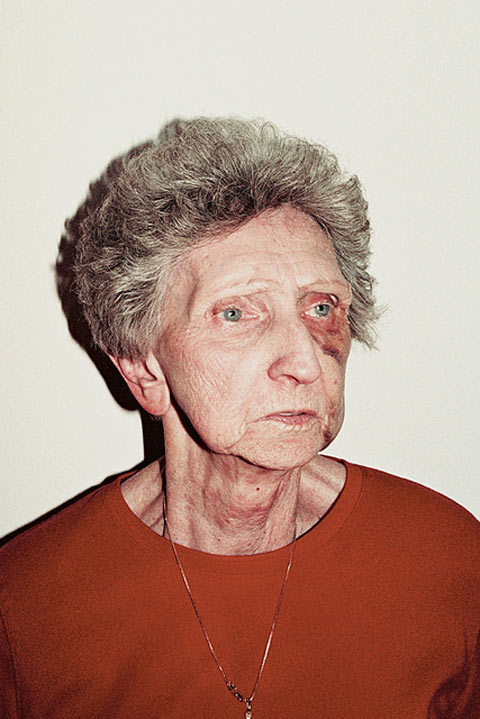 Brian James Kip’s Life Studies extract moments from daily life and combine them to make a richly colored and multi-dimensional portrait of his experience. Created with a meticulous approach that combines a graphic sensibility with a finely tuned sense of color, the images are just the right balance of the real and surreal. 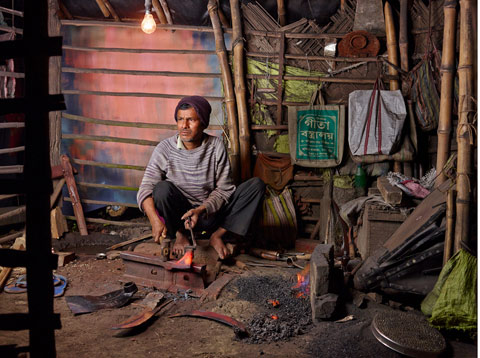 Supranav Dash’s series Small Trades documents Indian citizens daring to live outside the caste system in a style that blends real life subjects with a polished studio aesthetic. Currently earning a second bachelors degree—his first was in commerce—Dash has a background in commercial photography, so it makes sense that these images look ripe for commissioning. They are reminiscent of Irving Penn’s Worlds in a Small Room, but the background is painted neon colors and inserted into earthtone lives of Indian laborers. 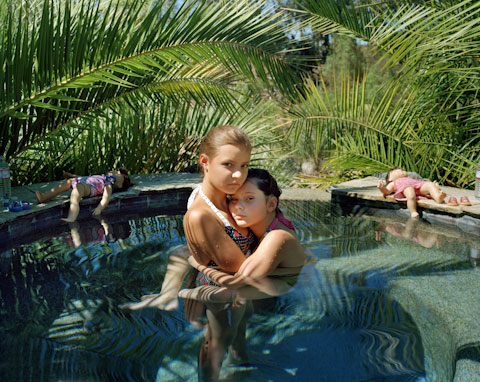 Ilona Szwarc has had quite an exciting and successful year, garnering much attention for her series American Girls, which is currently on view at Foley Gallery in New York through July 3rd. Every aspect of the photos is accounted for, exposing truths about American culture and the conditioning of gender identity. She recently had a solo exhibition at Claude Samuel Gallery in Paris, won a World Press Photo award, and was just awarded the Center for Photography at Woodstock’s 2013 Photography Now Purchase Prize. Szwarc will begin Yale’s MFA program in the fall. 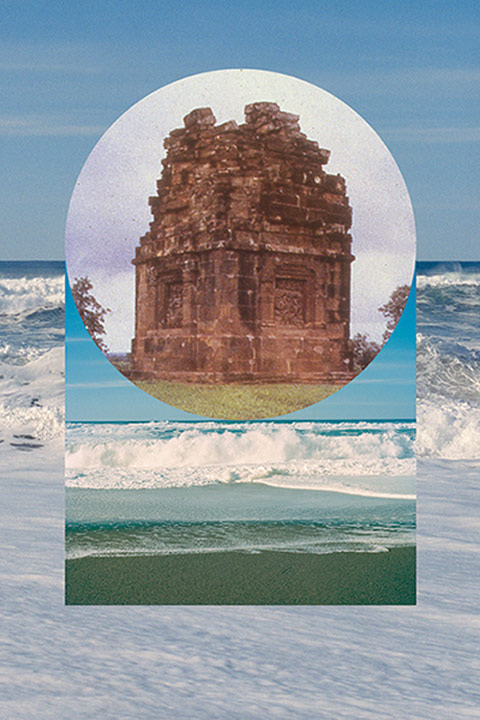 Francesca Tamse’s work was especially unique. It seems more like the kind of art coming out of a Visual Studies Workshop in the 70s. Perhaps Aspen Mays’ work may be a more contemporary counterpart. The work is malleable—at the SVA mentors show, images were projected onto an arrangement of rocks on the floor, but the same project can also be installed as a web of connected imagery on the wall. Tamse’s combinations of images are insightfully precise, and her abundant use of beach imagery complements the summer perfectly. Her book neo Ancient Sites is available at Printed Matter.

Parsons The New School for Design 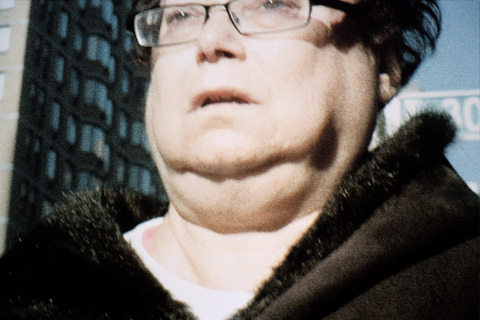 Arresting and ambiguous, Jose Raul Valencia’s odd frames capture evocative moments on the faces of New Yorkers. Film grain is used to create a richly murky pointillism, and Valencia’s compositions amount to an ominous vibe, making me reflect on surveillance in urban centers. They also make me think I should be paying more attention to the people around me. 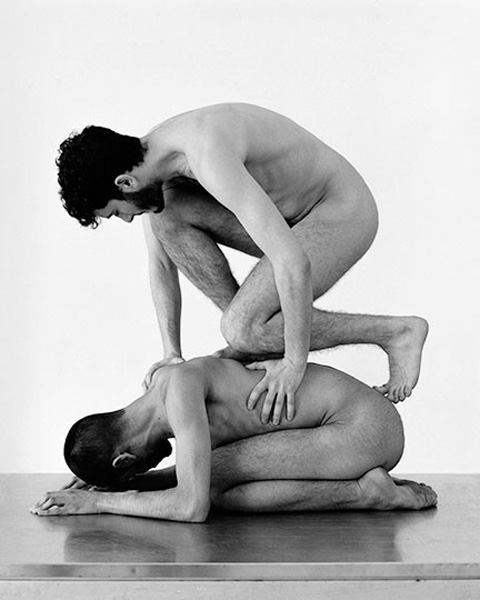 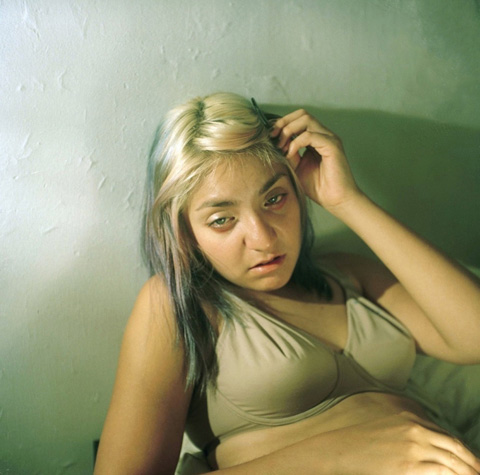 Having just covered Elena Montemurro’s work, she is fresh on my mind. Suspenseful, humorous, and relatable, the vividly colored images channel our own experiences of being a teen. Montemurro’s precarious and ambiguous scenarios lure us in, and we’re never quite sure of what’s around the corner. 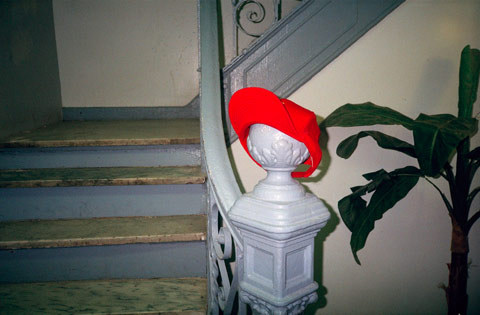 Charles Caesar’s photos hit you on a gut level. They work a little like Larry Sultan and Mike Mandel’s Evidence, but they’re personal snapshots, so they carry more pathos. While they are relatable in their human-ness, the scenarios depicted are bizarre and uncertain. The grainy 4×6 prints channel the joy of looking through a stack of snapshots you just got back from the lab, except each and every one is a strange and miraculous accident. 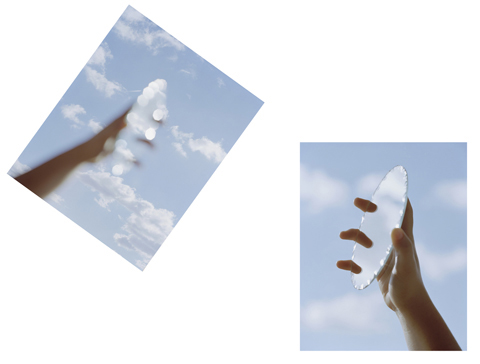 Sacha Vega’s series SEE SAW is a light-filled exploration of places pasted into each other, working breezily around the way photographs transport space. The images walk the line between photographically represented space (the space of the picture plane), and real, actual physical space. In her thesis exhibition at Pratt, Vega employed sculptural installations in low relief to great effect, inviting a fluid relationship between our space and hers. 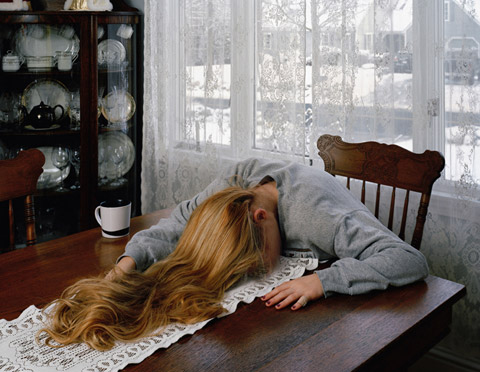 James Gentile forces family photos, staging stiff compositions out of friends and relatives in familiar places. Gentile challenges accepted notions of relationships between people, simultaneously trying to place himself within this structure through photography. The photos are warm and humorous, offering a fresh take on the family as subject. 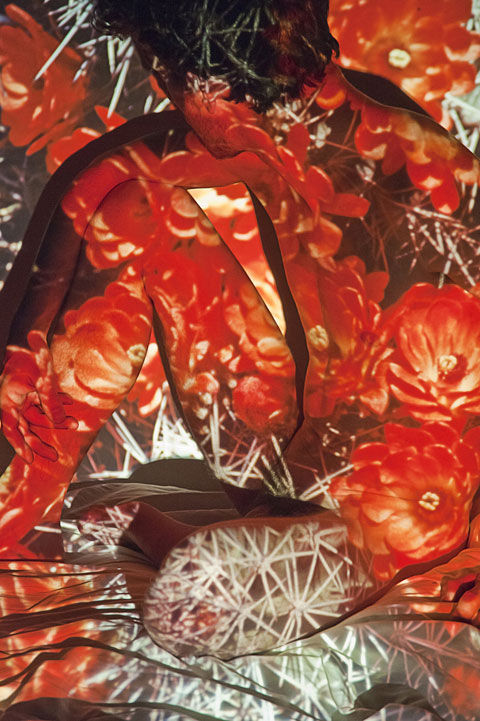 I’ve looked at countless photos while researching this overview, but this one by Paul Brodeur has floated to the front of my mind more than any other. Perhaps it’s just the nudity and the desert imagery, but I can’t help but think of the work of Alfred Stieglitz and Georgia O’Keefe. Lush, provocative, and haunting, Brodeur’s projections on nudes deliver.

Kelley McNutt is part of a growing movement of what I’m calling “Garbage Girls.” They’re young artists involved in a conversation about female identity with an often nostalgic focus on youth and the 90s. A dreamy neon haze pervades their pictures, and the use of “low” culture themes, a cluttered aesthetic, or literally garbage, are presented to produce meaningful reflections on the experience of being a contemporary girl. I’d put artists Lauren Poor, Signe Pierce, Elizabeth Renstrom, and even whiz kid Olivia Bee in this category as well. McNutt’s art is more interrogative of social constructs than it is introspective. And while it clearly grows from a very personal place, there’s an element of hyper-reality here, and seemingly a lot at stake. McNutt’s work is some of the most exciting I saw this year, and certainly the most bizarre. This video piece sums it up—unsettling, annoying, alarming, and at the same time completely entrancing. 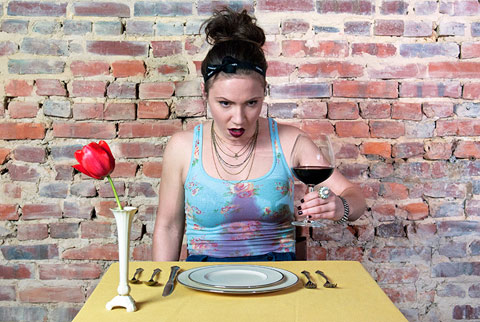 Zhenia Bulawka’s self-portraits cleverly expose frustrations of modern womanhood. Her series Fail is a staged vision of domestic mishaps in which the artist’s telling facial expressions hold the pictures together, creating a sit-com of her everyday trials. 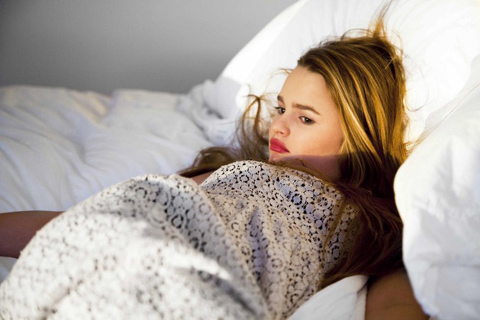 A standout of this year’s RISD BFA crop was Morgan Palmer. Palmer’s pictures are pleasant, poppy, and polished. Thirteen, a surreal documentary series about her sister is a fascinating portrait of a tween girl who’s assuming the persona of a much older woman. Palmer says about the work, “my sister and I are both seduced by a vision of feminine perfection that we are also highly critical of.” 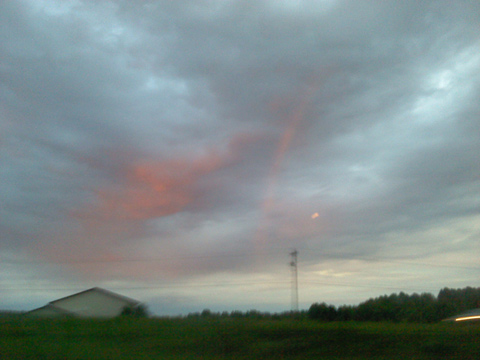 Elliott Romano’s series Proof is a humorous look at UFO imagery. An exercise in (perhaps justified) paranoia about government drones, this series addresses what we see—or what we think we might see—when we look to the sky. One summer in Brooklyn, Romano noticed something that may just have been a child’s balloon floating away into the atmosphere, and began to question what he was actually observing. This sparked the project; his resulting photographs scour the sky for signs of intelligent life and play with the notion that photographs are inherently accurate. In the mode of Antonioni’s 1966 film Blowup, Romano exhaustively looks for evidence of something that may or may not be real.

If you’re from a school not included here and would like to be considered for a follow-up article, please contact Feature Shoot.